Beside the Sea ~ Jellyfish Sightings in Scotland 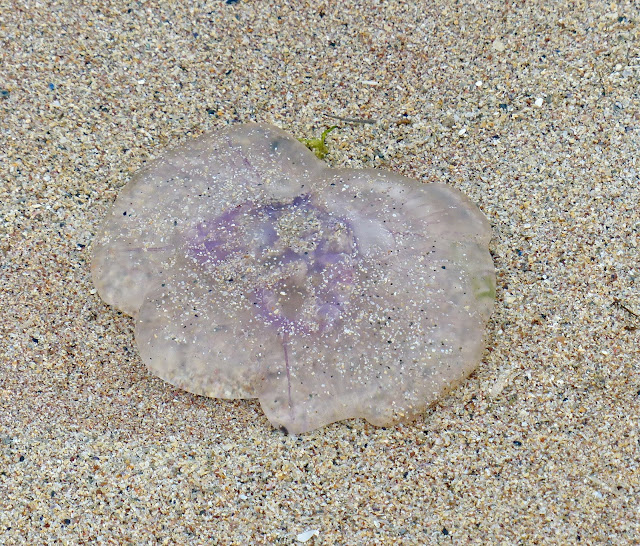 While we were in Scotland we saw jellyfish on two occasions. The jellyfish above was on the beach at Durness (24 June 2013).

The one below was at Chanonry Point (26 June 2013). It was part of a cluster of stranded jellyfish: in the evening light, we counted 56.

Both photos (I believe) show the Moon Jellyfish, also known as Aurelia.

I shall record these sightings on the Marine Conservation Society site. Jellyfish are linked to Leatherback turtles in the food chain. These magnificent, but threatened, turtles make huge underwater journeys in search of these strange sea creatures.

The stings from some species of jellyfish can be dangerous, so it is important to treat these free-swimming marine animals with care. 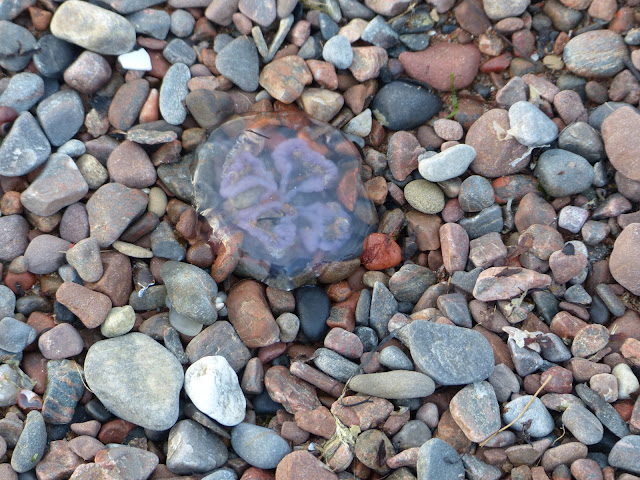 When we were at Widemouth last week, I forgot to mention the fact that the sea was FULL of jellyfish and also what I think were mackerel swimming around between people's legs. No pictures from me so lovely to see yours!

I was at Tralee Bay, just up from Oban yesterday and we saw loads of jellyfish in the water. We had been there a week previously and there were none but yesterday was a vast difference. They were all over the shore and also the water had them floating all over. The tide had changed from the week before and was further in at the same time of day, plus the temperature was higher so not sure if these were contributing factors!

Thank you, Em and Mum on the Run for your comments. I'm wondering whether they were the same kind of jellyfish?