Butterflies and Moths: A Caterpillar with Red Spots on Mersea Island

We crossed over The Strood, the small causeway bridge separating Mersea Island from the Essex mainland. There are certain tides in the year when you cannot cross for a few hours, but as you can see, we had no difficulty today. 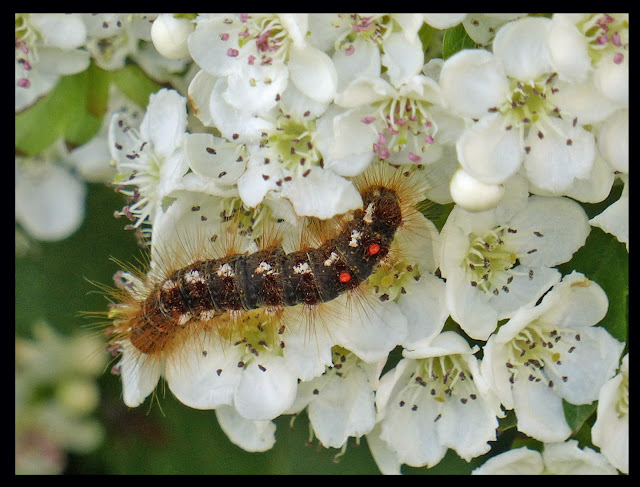 I was quite excited by this caterpillar. The two red spots suggested to me that it would be potentially harmful, so I only allowed myself to get 'up close and personal' via my zoom lens. 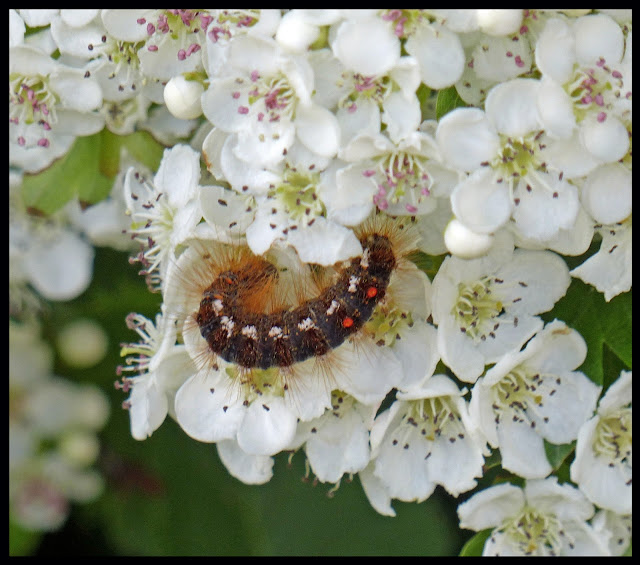 The caterpillar turns out to be the larva of a Brown-tailed Moth. I have only seen this species once before, and that was on the Spurn Head peninsula. You can read the health warning here. You can read about these caterpillars in Suffolk here.

On Spurn, we had seen the tents, but here I could only find the one individual in my photos. It will turn into a black chrysalis later this month, before emerging as a brown-bodied white-winged moth in July. 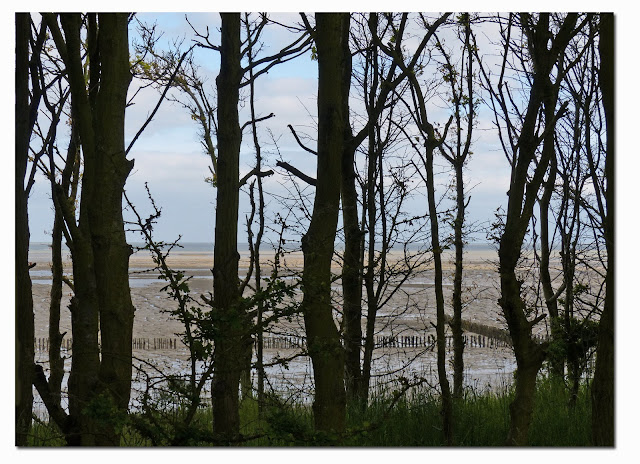 We enjoyed a quick wander through Cudmore Country Park ... 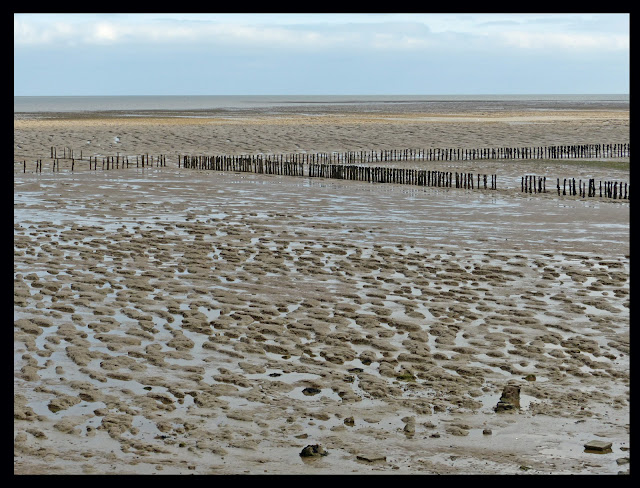 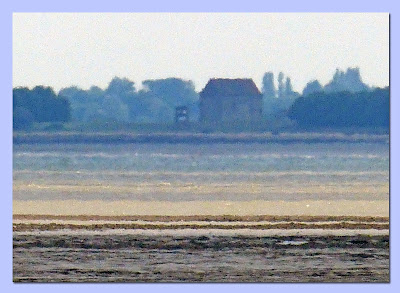 ... and looking right across to Bradwell and Othona. My zoom was on maximum, and the image was very fuzzy, but I quite like the effect. The building above is St Peter's Chapel. It was constructed in 654 by St Cedd from the masonry of a nearby Roman fortification that formed part of the Saxon Shore. The ruined chapel was used as a lighthouse in Tudor times. You can read more here. 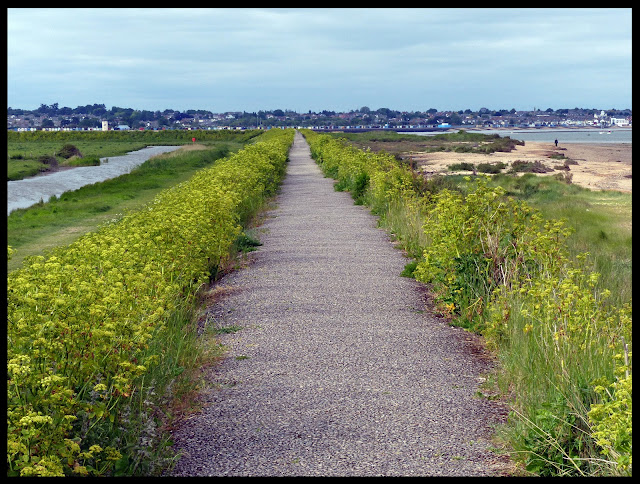 The photo above shows the footpath on Mersea Island to the foot ferry to Brightlingsea. We saw Lapwing and Swallows from this path - and Skylarks as we walked through the footpath in the grassy areas of the country park. 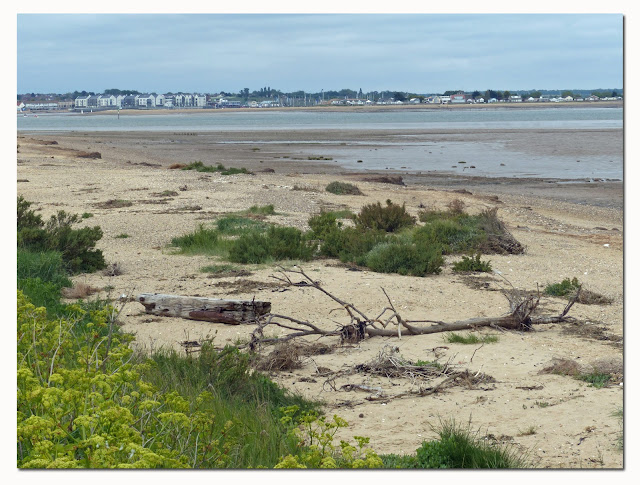 The clergyman, Sabine Baring Gould, who penned the words to the hymn 'Onward Christian Soldiers', was the incumbent (1870-1881) at East Mersea's church, dedicated to St Edmund King and Martyr. He wrote Mehalah, a Gothick novel of violence and tragedy, about the island. The tale is certainly atmospheric (rather like parts of The Moonstone by Wilkie Collins). Mehalah is a very strange read! 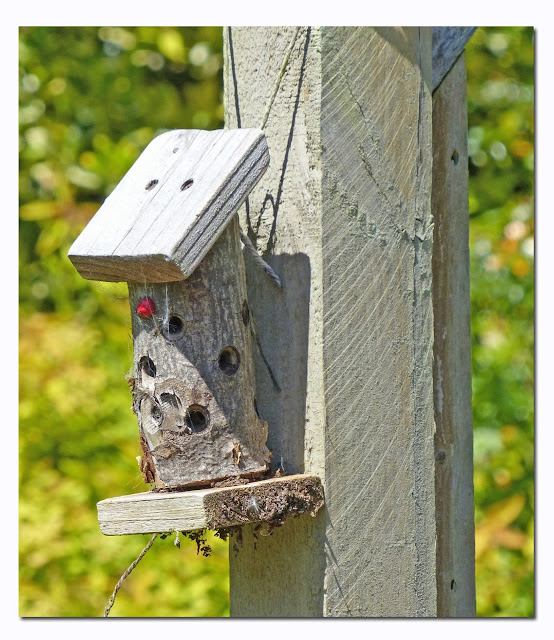 It is always interesting to see new things in the garden. I have been watching my Ladybird house, and while - alas - I have not seen any Ladybirds, I have noticed some flying insects who keep alighting on the wooden post, just below the house. More often than not, these insects have invariably flapped their wings and flown off in the time it has taken me to adjust the zoom on my camera. I am wondering whether at least one of them, a cuckoo wasp, is linked to another insect's nest in the Ladybird house.

Yesterday, however, I saw an insect (no photo, I'm afraid from that sighting, despite an attempt) of an insect I recognised instantly from a visit to Minsmere last August ... a Ruby-tailed Wasp. These insects with their metallic rose-red abdomens and their emerald green head and thorax have been described as  'perhaps one of the most beautiful British insects'. The photos I tried to take at Minsmere last year have been re-posted below, underneath my recent pictures. 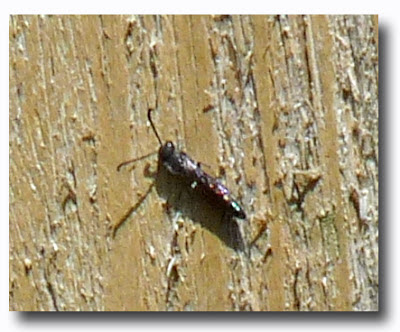 The insect in the photos immediately above and below was sighted this morning. It shone with iridescence, but the areas of colour were not defined, unlike those of the Ruby-tailed Wasps I have seen. 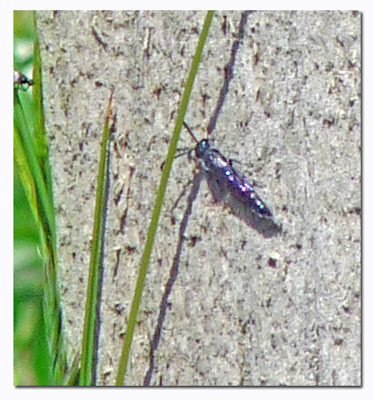 The insect below also visited the same post below the Ladybird house this morning. I would guess that a creature with those white markings would be relatively easy to identify ... but an ID has eluded me thus far. I have found somewhat similar-looking insects on websites from the USA ('black and white' wasps etc.), but nothing from the UK.

Later: taking a second look, I just wonder whether the four white 'moons' could simply be reflections due to the iridescent nature of the elytra. What do you think? 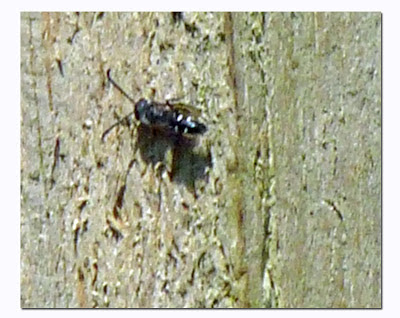 If you can help with identification, do leave a comment or email me (email on Profile page). All these insects have wings, and when they land, they don't stay still for long!

You can read my previous post about the Ruby-tailed Wasp here ... and the identification help I received from 'What's that Bug?', which is here. 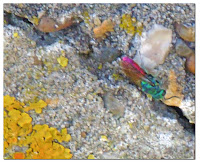 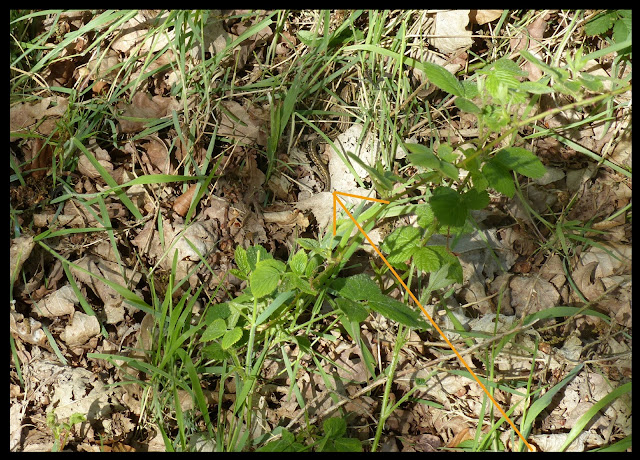 We had been told that there were Adders about at RSPB Minsmere, so we were keeping an eye out for reptiles over the last Bank Holiday weekend. David was particularly sharp-eyed, and spotted a scaled creature camouflaged by the dry leaves. The photo above has been cropped considerably to make the reptile more visible! 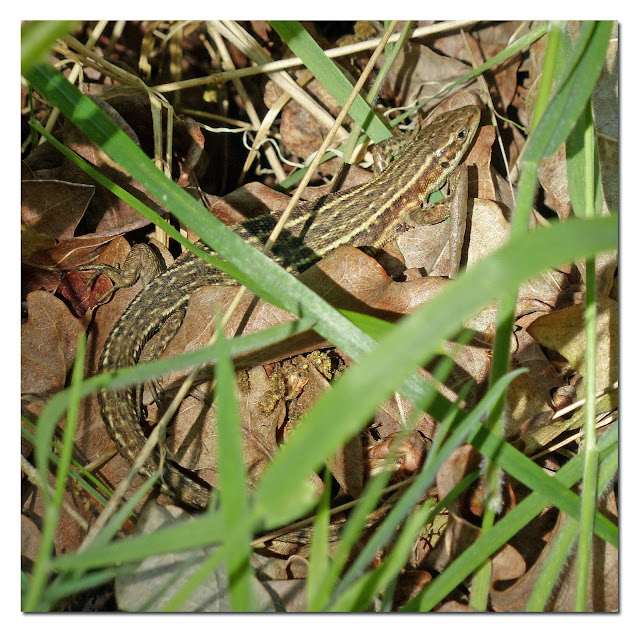 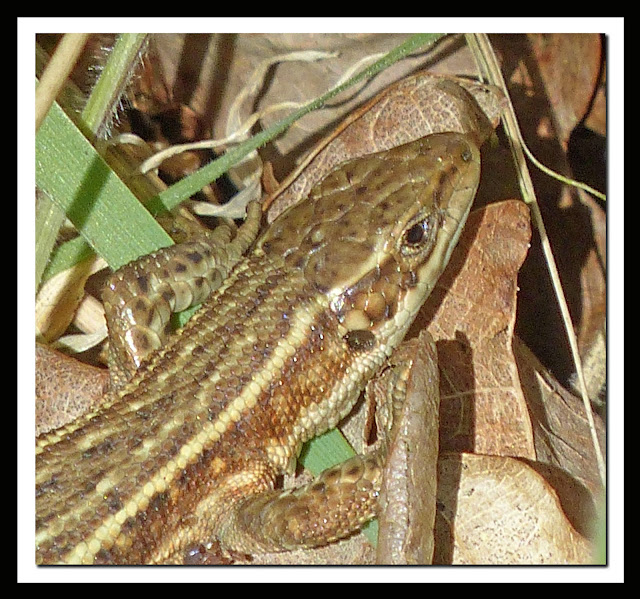 ... a magnificent Common Lizard. Definitely another exciting seasonal first (26 May 2013) ... though we never got to see an Adder! 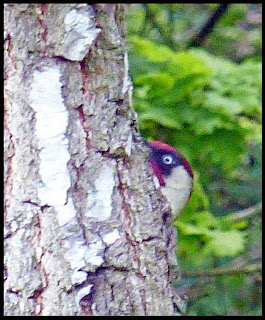 First there was just a head, with a beady eye ... 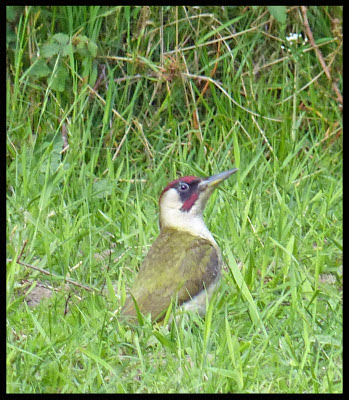 ... then there was a yaffle and a scuffle, and one of two Green Woodpeckers landed on the grass in front of some pine trees at Minsmere. 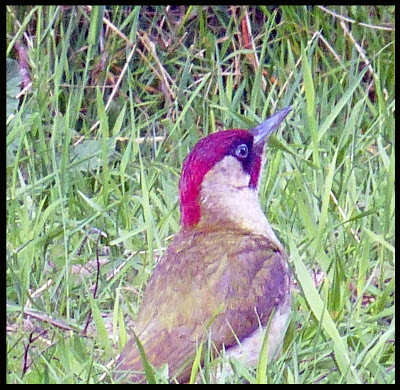 This was my first sighting of this species since 25 February.
Posted by Caroline Gill at 11:30 2 comments:


I know the caterpillar above is far from hidden, but do take a look at this extraordinary article on caterpillar camouflage. 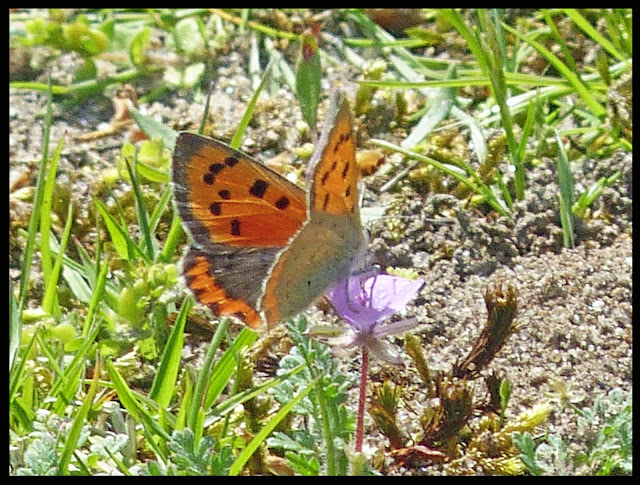 We saw our first Small Copper butterflies at Minsmere on 26 May 2013. 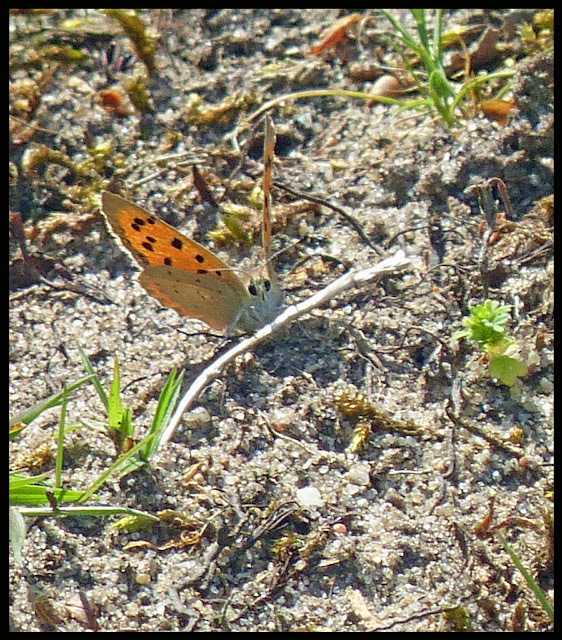 
This was a very active Common or Red-headed Cardinal Beetle, as you can tell from the tremor in its antennae! It was scuttling along in shadowy sunshine at Minsmere on 2 June 2013. A seasonal first for me!
Posted by Caroline Gill at 11:24 No comments: 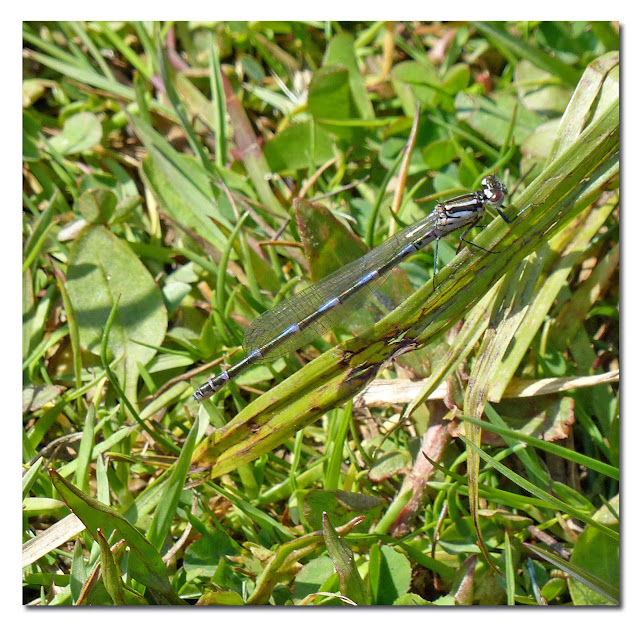 We saw our first Damselfly (just the one) and Dragonflies of the year at Carlton Marshes on Bank Holiday Monday, 27 May. This seems very late in the season for first sightings, but perhaps not surprising after the cold winter. 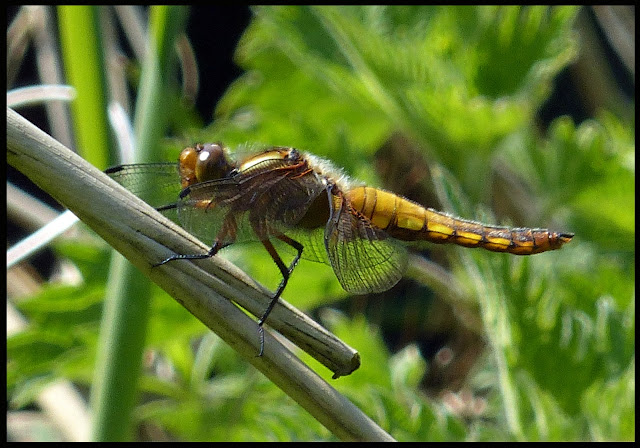 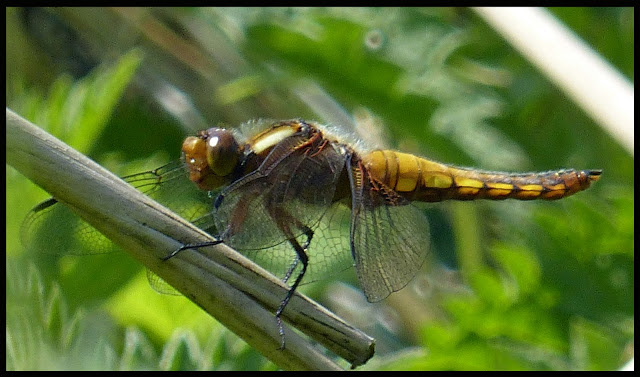