Back on Dunwich Heath at last 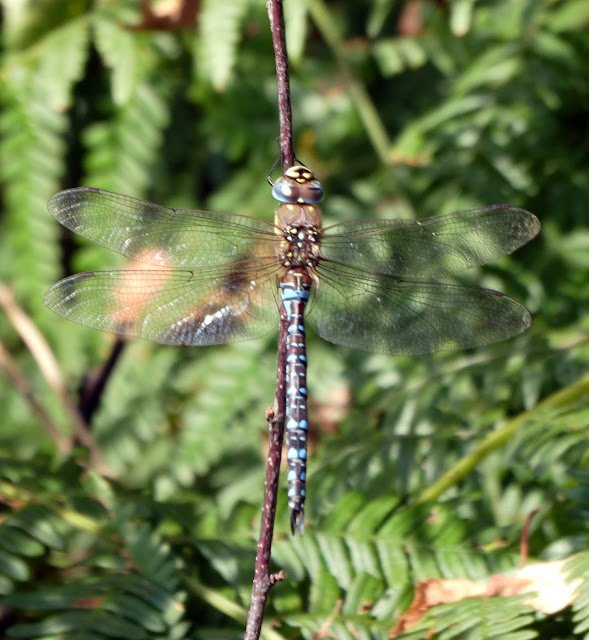 We took a picnic to NT Dunwich Heath last weekend, hoping that perhaps there would be a few breaks in the cloud. 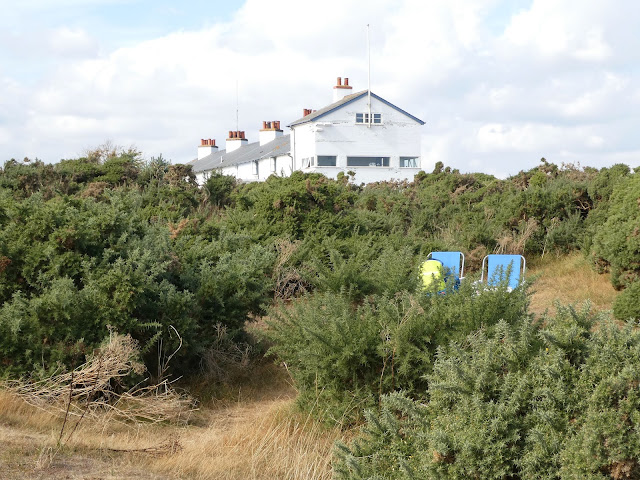 You can see our picnic spot in the photo above. The white building is made up of old coastguard cottages. I took this picture with my back to the sea. 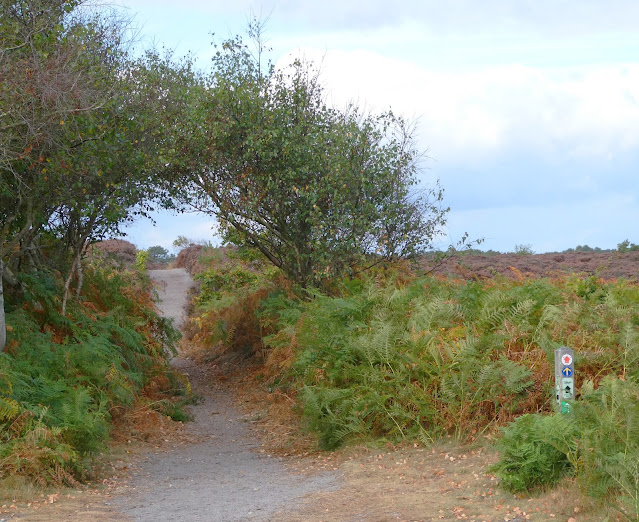 I love the archway above and have never noticed it before. The weather was overcast initially, but by about 2pm, the sun had broken through and we were able to watch a few damsels and dragons in the sheltered corners. 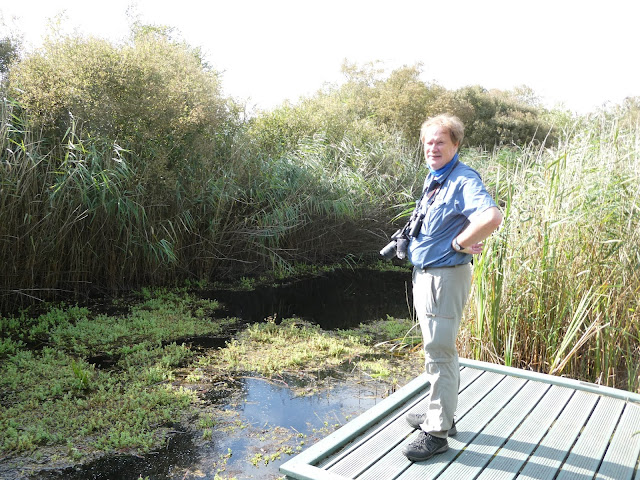 As we peered into the water beneath the decking, our eyes alighted on two Great Diving Beetles. I was reminded of the giant water-beetle in The Tale of Mr. Jeremy Fisher by Beatrix Potter. 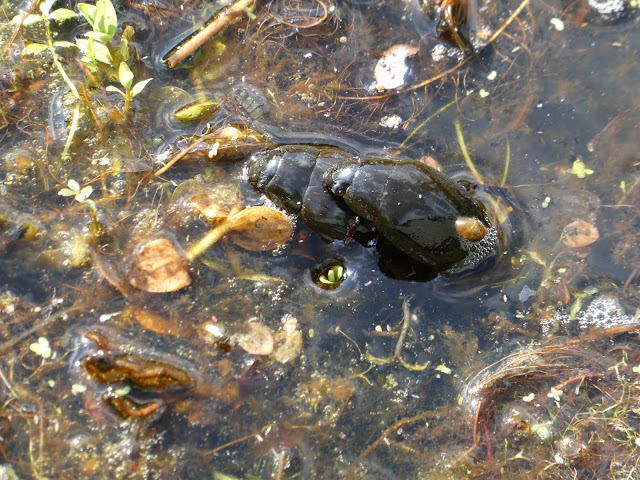 David had his measuring card on him, so we were able to see if the beetles were three centimetres in length, the size of a Great Diving Beetle. We reckoned they were pretty well spot on, despite the fact that the remaining beetle's head had dipped down by this time. 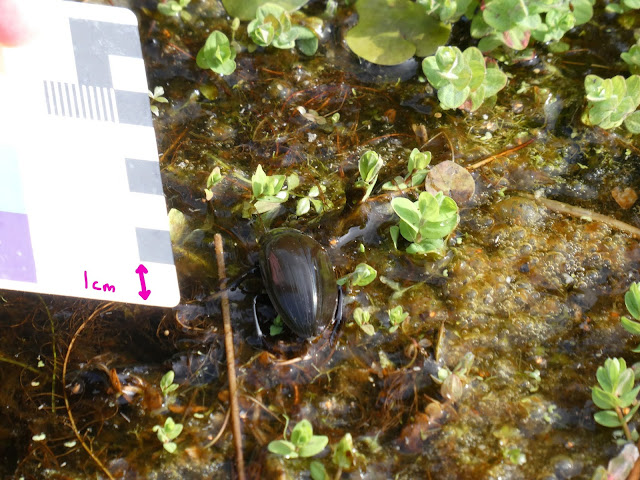 There were good numbers of Ruddy Darters; most, but not all (see below), were on the wing. The one in the photograph had rather ragged wings. 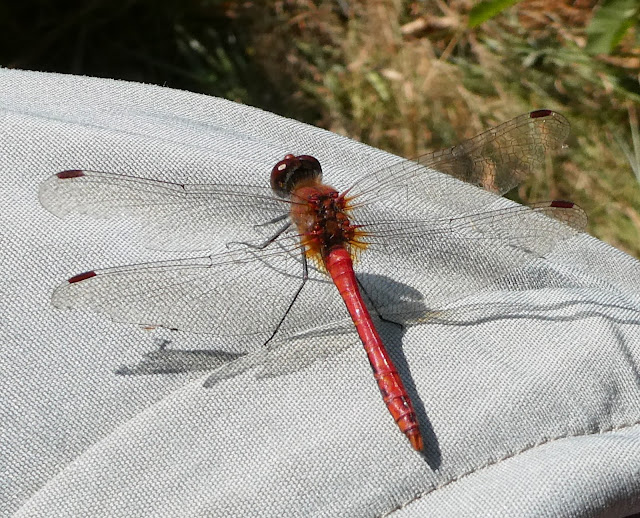 The dragons in the next photo were certainly making their presence felt! 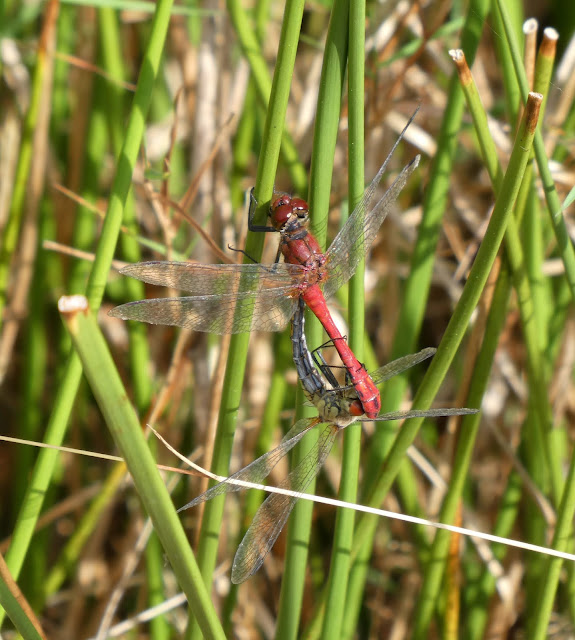 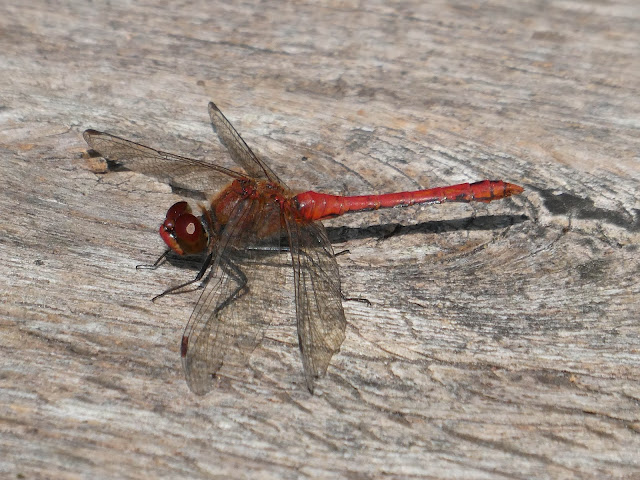 We saw two Migrant Hawkers during the course of the afternoon (see above, first photo in this post), both hanging from their respective branches of twigs. They both had a blue aura about them, possibly a trick of the low light, but I think they are Migrant Hawkers as both displayed the characteristic yellow golf-tee mark. 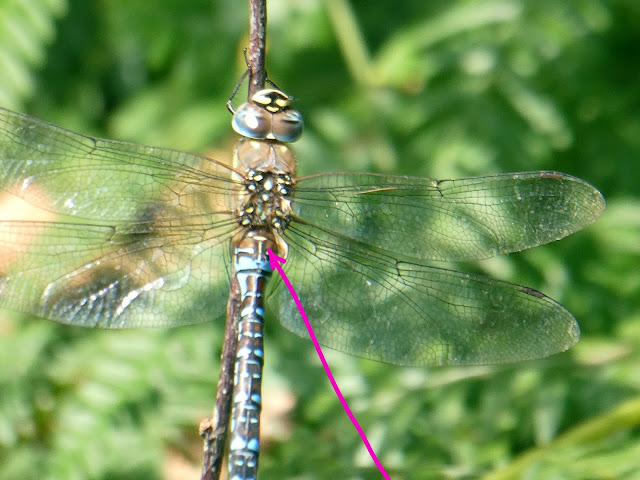 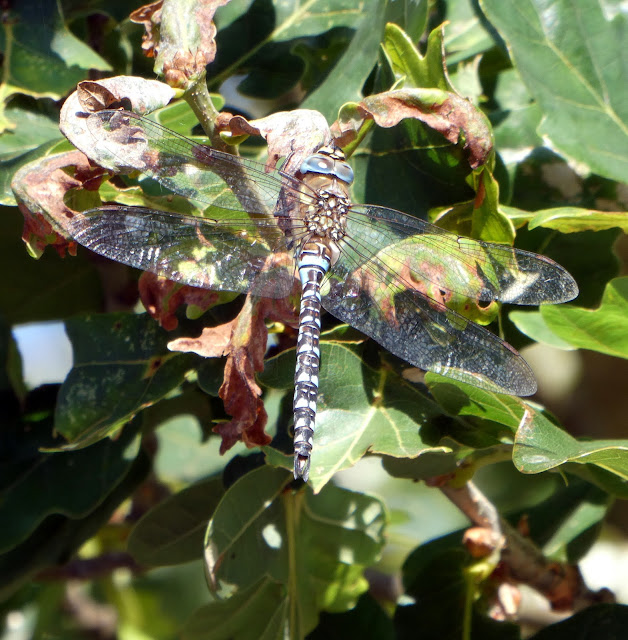 I have seen very few damsels this year, so was delighted to find the Emerald Damselfly (update, 29 Sept. 2021: please see comments where Conehead54 has informed me that this is actually a Willow Emerald) in the photo below). 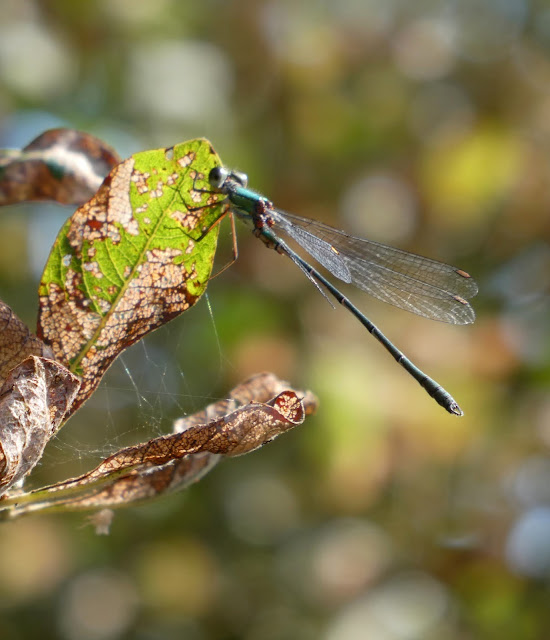 The damselfly in the next two photos was a very obliging subject. 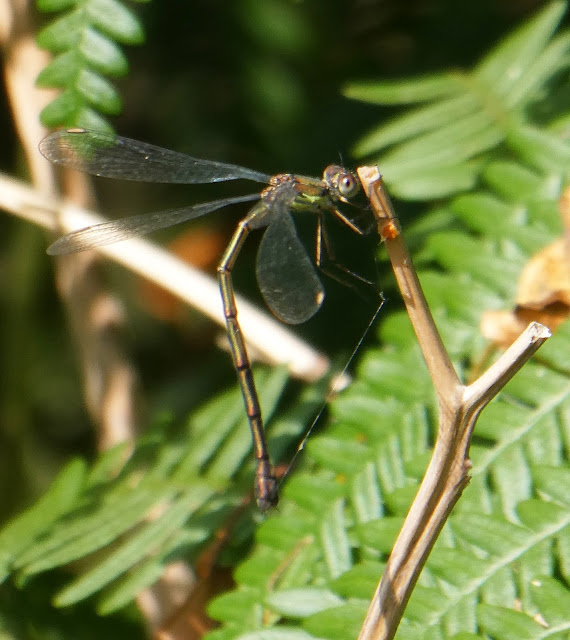 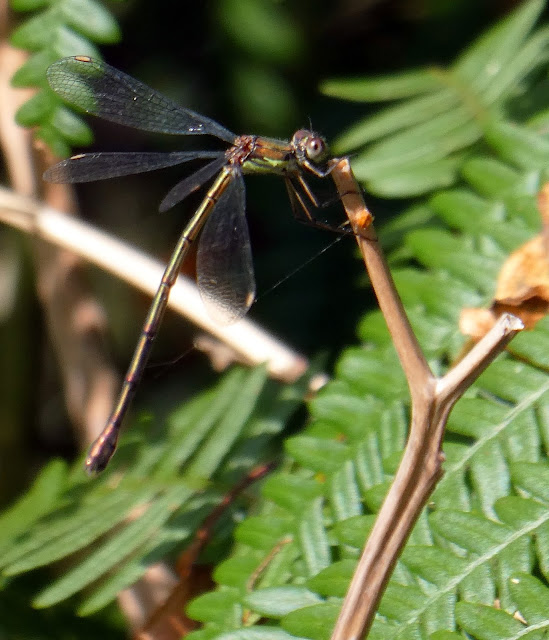 We found the sandy bank home of some Red-banded Sand Wasps. You can just about make out the pockmarks in the exposed part of the ridge. The photos below show one of the wasps entering the nest. 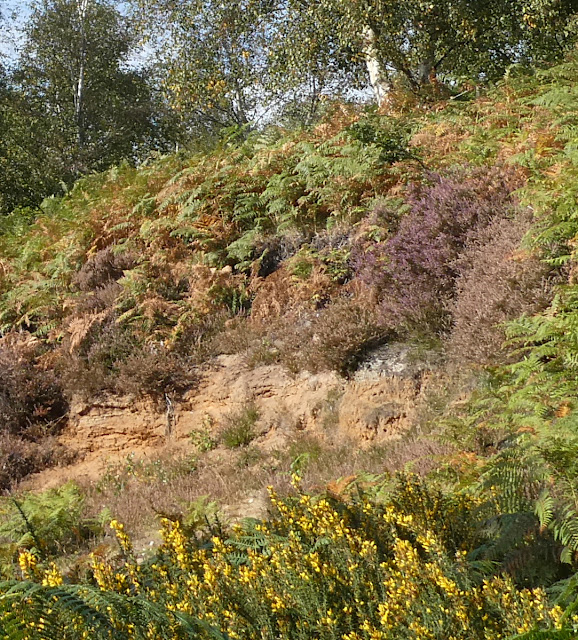 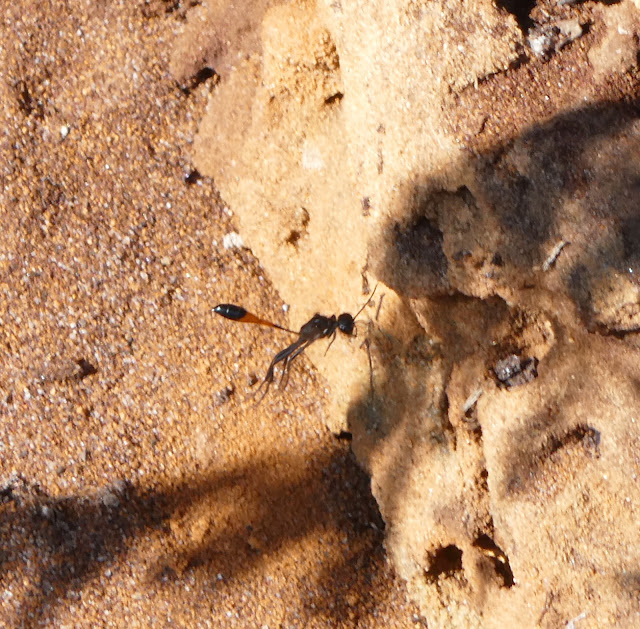 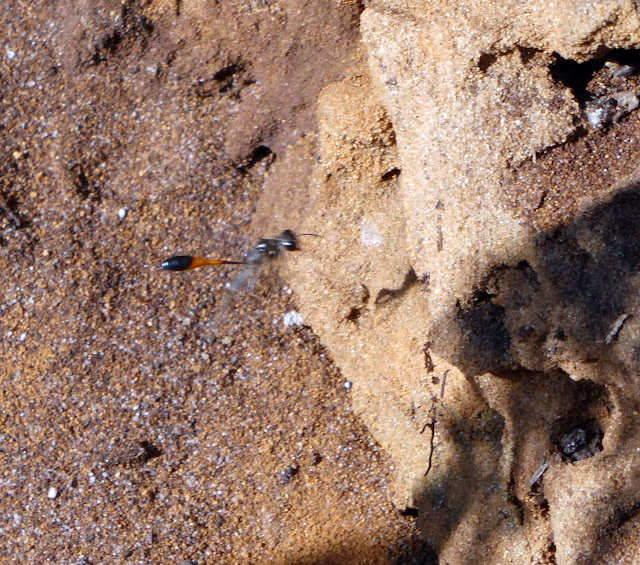 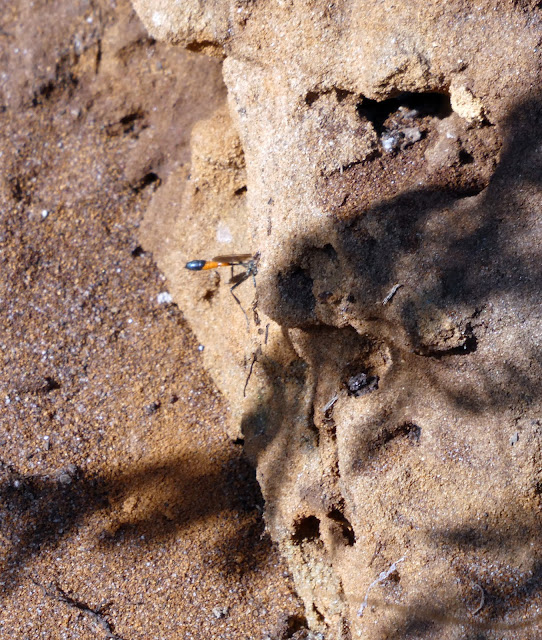 I had not expected the heather to be turning brown so soon, but there were still some small patches where most the flowers were still in bloom. I have always enjoyed seeing heathland, whether in Suffolk or Cornwall, alight with the pink of the heather and the golden glow of gorse. 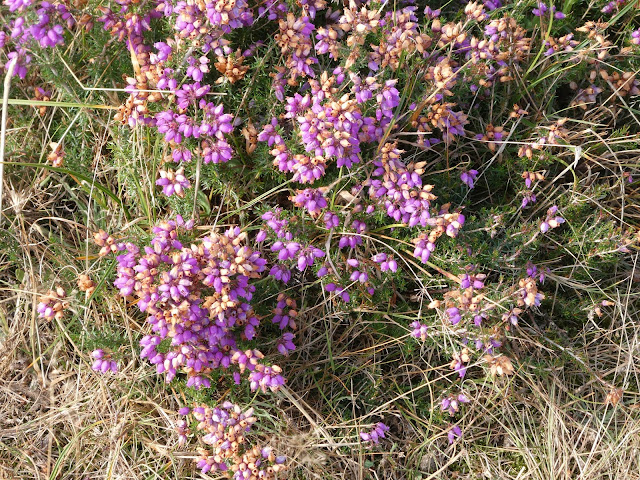 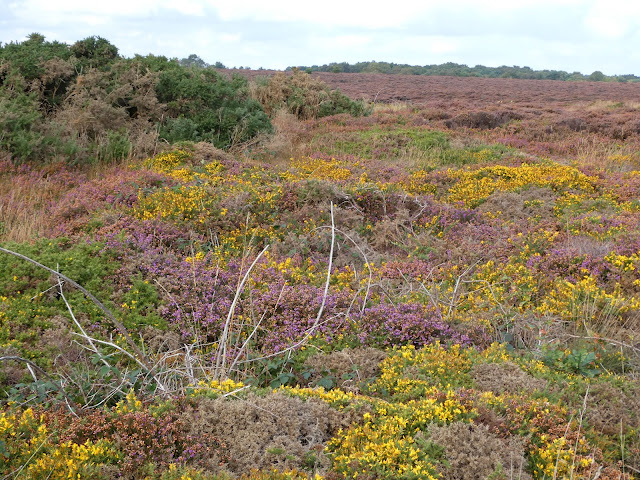 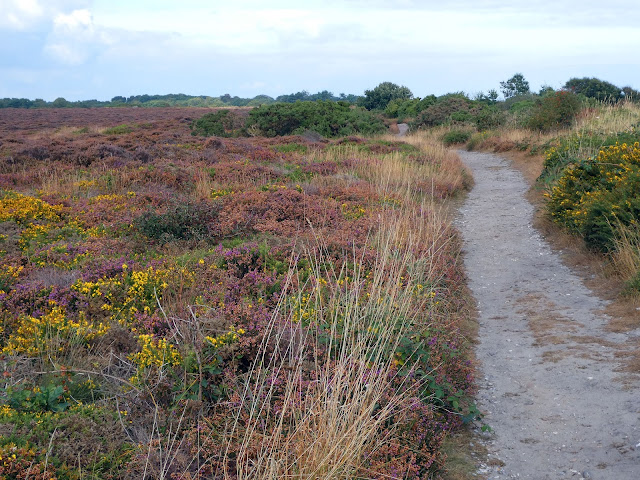 We were soon back at our starting point by the coastguard cottages, staring out at the ocean. As you can see, there was no need for any social distancing down below on the shore! 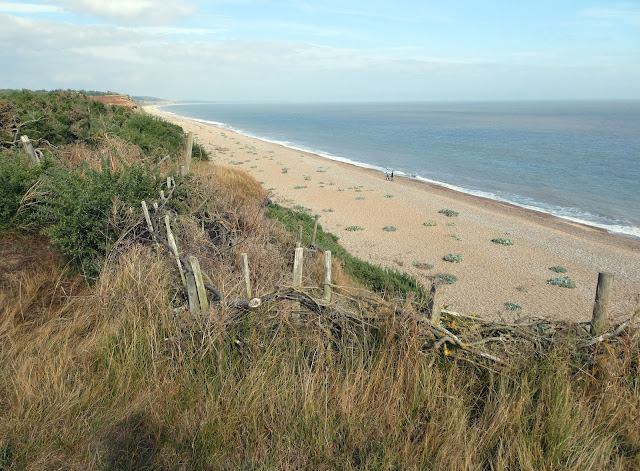 Since last Saturday when these photographs were taken, the weather has turned much more autumnal, which is perhaps not surprising since we are now several days past the Autumn Equinox. I can hear lashing rain outside my window as I type, and I suspect it may be many months before we see scenes like the one below again. 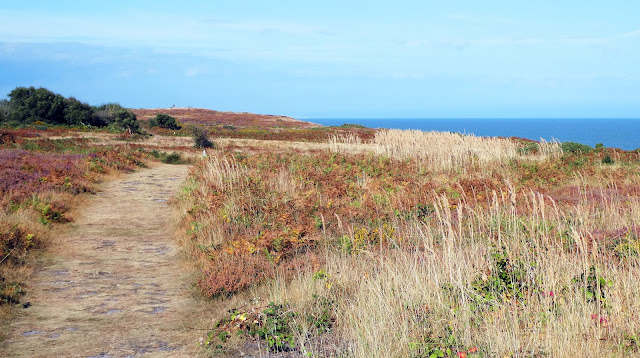 Dunwich Heath is a favourite haunt. It features in my poem, 'Dunwich in Winter', which can be found on p.14 of my recent poetry collection, Driftwood by Starlight (The Seventh Quarry Press, June 2021) - see here.

This poem has also been reproduced on the Suffolk Poetry Society 70th Anniversary calendar for 2022. 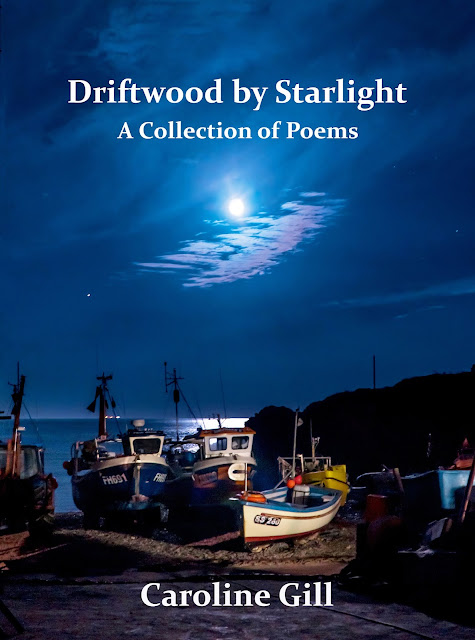 'On a Knife Edge' Review 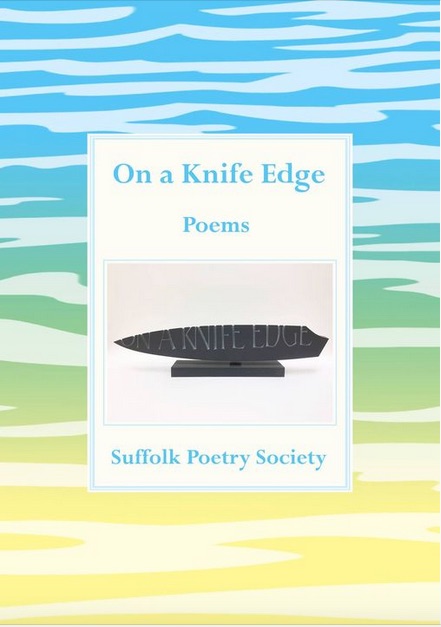 Back in May I blogged about this book on my Poetry and Other Writing blog. In case you missed it, I shall re-post my words here. Juliet Wilson has written a review of On a Knife Edge, which you can read here on her Crafty Green Poet blog. Do take a look. And thank you, CGP, for mentioning my own recent collection of poems, Driftwood by Starlight (The Seventh Quarry Press, 2021).

On a Knife Edge was published by Suffolk Poetry Society as a response to the diminishing state of nature report. It forms part of a collaboration between the Society and The Lettering Arts Trust (Snape), where an exhibition of the same name opened in July. I am delighted to have two poems and a micro-poem about IUCN red-listed species included in the book.

The topic resonates closely with Robert Macfarlane's work (supported by Jackie Morris and her artwork) in response to an increasing concern over the fact that 'nature words' (for the 'lost words', see here) were being removed from the 2007 edition of the Oxford Junior Dictionary. Apparently space was needed for words deemed more valuable in a digital and technical age. You can read my post here about a previous exhibition at The Lettering Arts Trust on this subject.

On a Knife Edge was primarily created by Derek Adams, Lynne Nesbit, Beth Soule and Colin Whyles. It can be purchased here.

Wasp Spiders and their Egg-Sacs

We first encountered these fascinating spiders (Argiope bruennichi) in September 2020. Between 5th and 9th September last year I recorded four females, the large striped ones, in our home patch.

We have enjoyed watching them again this year, though we have never seen more than three at a given time. This morning we discovered a second egg-sac in the long grass, so we hope this means that there will be more Wasp Spiders in 2022.

These spiders like natural grassland, and we suspect it is our lack of mowing, the result of a pledge we made at the Suffolk Wildlife Trust Summit, that has attracted them to our wild garden. The long grass has certainly attracted grasshoppers, a key food source.

The discovery of a new egg-sac seemed a good moment to post some of our Wasp Spider photos. I hope you enjoy them!

You can read about the 'ultra-violet reflective' stabilimentum or zigzag section of web here in the beginning of an article.

The male Wasp Spider is much smaller than the female. It is light brown and has two yellow lines running along the underneath of the abdomen.

My thanks to David (Gill) for a couple of the photographs in this post.

Surprise Moth on the White Buddleia 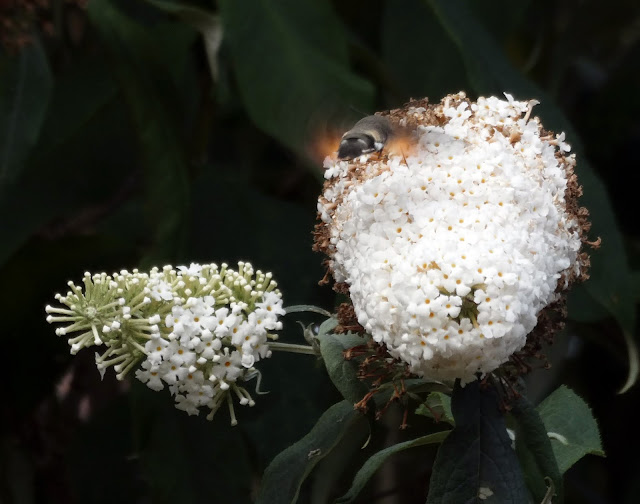 I fear I am rather scraping the barrel with the quality of these photographs; but, once again, they serve as useful record shots. Our white buddleia has at long last come into its own this year, attracting the occasional Comma, Peacock, Painted Lady and Small Tortoiseshell butterfly, along with good numbers of Red Admiral and Small White. There have been plenty of bees on the higher branches.

We were sitting outside on Thursday afternoon when a particularly 'fluttery' insect caught my attention and I knew almost instinctively that it was a Hummingbird Hawk-moth, a garden first for us. I am adding the sighting to my home-patch list. The moth was very skittish and hard to photograph. It did not hang around for long, but it was there and we both saw it. 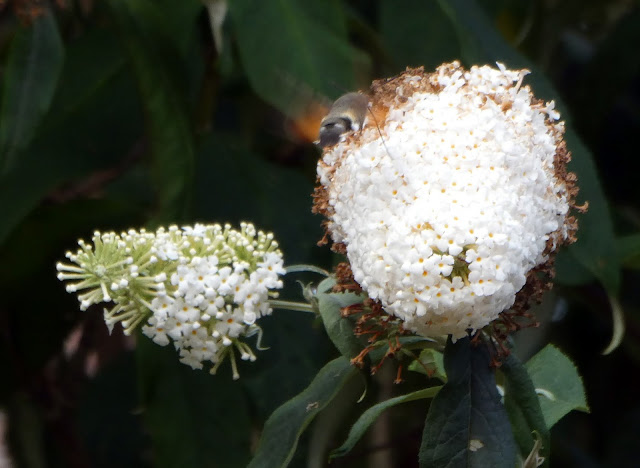 I last saw one of these beautiful insects here in Suffolk a few years ago. Prior to that, my sightings had been in the western Peloponnese - here. You can read more about the Hummingbird Hawk-moth here on the Butterfly Conservation site. 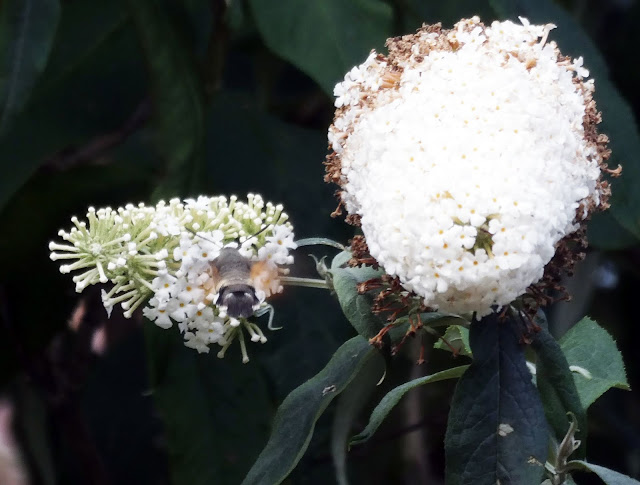