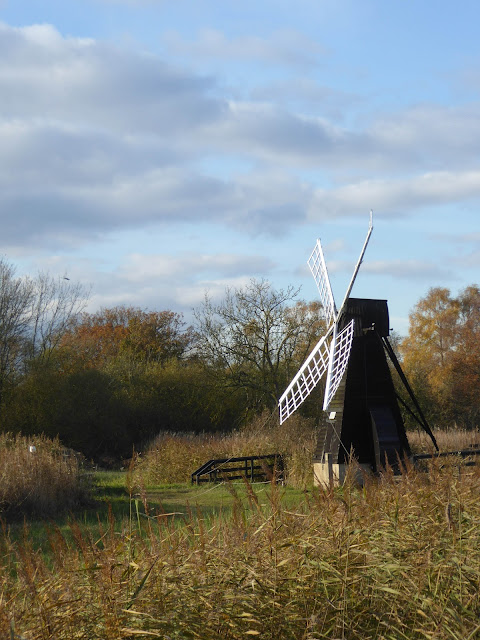 The promise of late autumn sunshine lured us out
with a picnic lunch to NT Wicken Fen
for some fresh air, bright colours and wide skies.
There are two windpumps in the village:
you can read about the other one here. 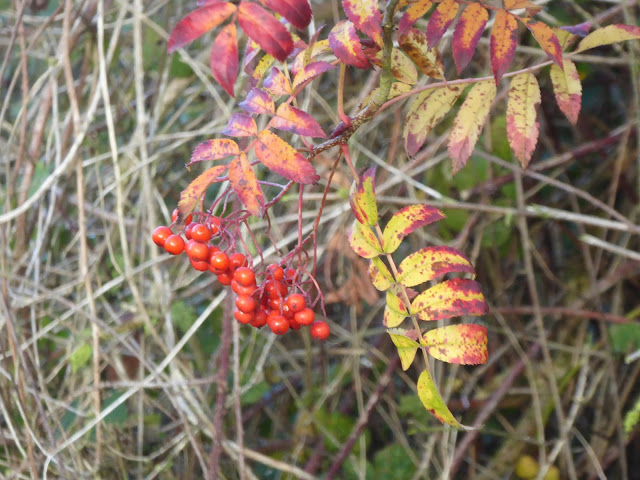 The colour red was represented by berries (above) and leaves (below)... 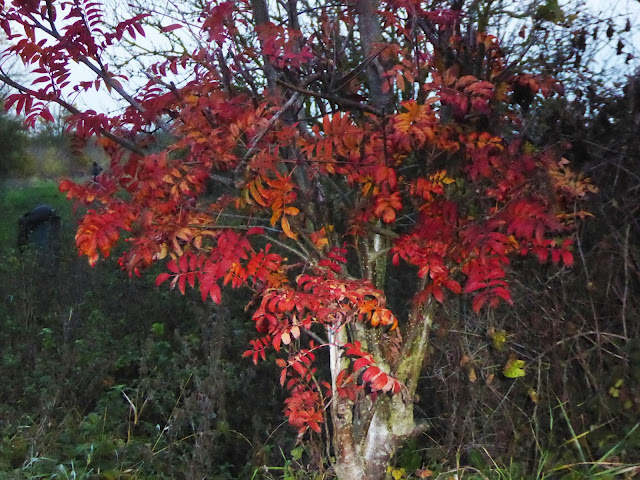 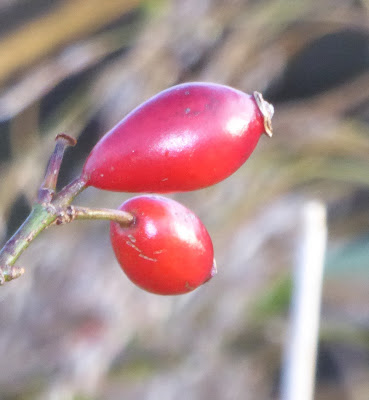 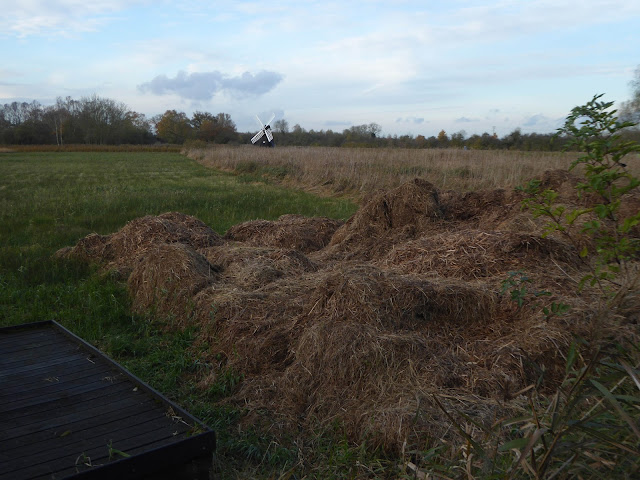 The photo above was taken as the light began to fade, but I am posting it because it represents a term, the Duffey heap, that is new to me. A Duffey heap comprises grasses which are known in this fenland area as 'litter'. The grasses are cut in a three year rotation in late summer once they have gone to seed. The harvested litter is then moved from an area of tall herb fen to the corner of the reserve you see in the picture above. These heaps are named after Eric Duffey, who was a regular visitor to the site. You can read a sample of his work here, including his thoughts on the value of these heaps.

Duffey was President of the British Arachnological Society (BAS) from 1969-73. He discovered the magnificent Fen Raft Spider in Suffolk, a species that suffered decline, and is only now coming back a little, thanks to massive conservation initiatives. You can read more about the Fen Raft Spider here, and this linked Dolomedes page, which has a link to my Fen Raft Spider poem.

Back to Wicken Fen, and here we are by the entrance to the reserve. You can take a delightful boat trip along the lode on the Mayfly during summer months, with commentary about the fenland life of eel-catchers and others. 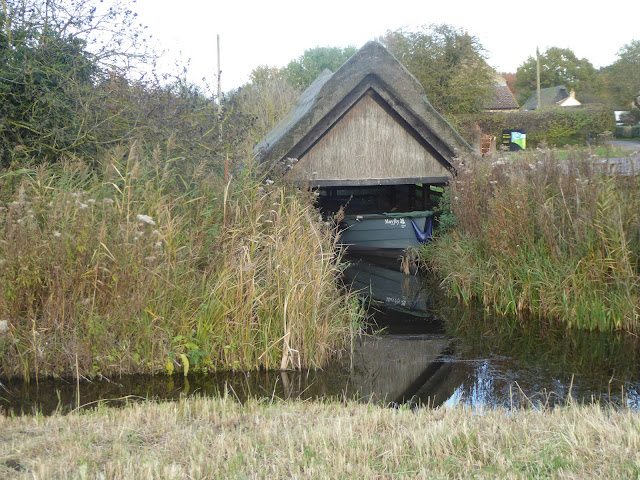 The molehill below may not represent the brightest of autumn shades,
but just look at the colour of the dark peat soil. 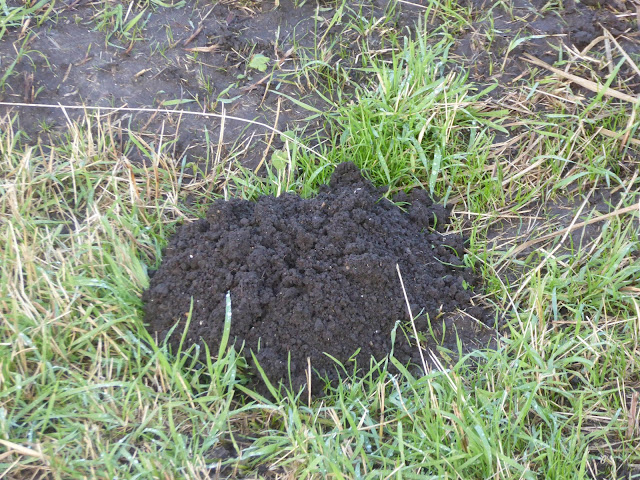 Despite beautiful birdsong, we saw very few birds:
the sparrows below were hiding in the branches... 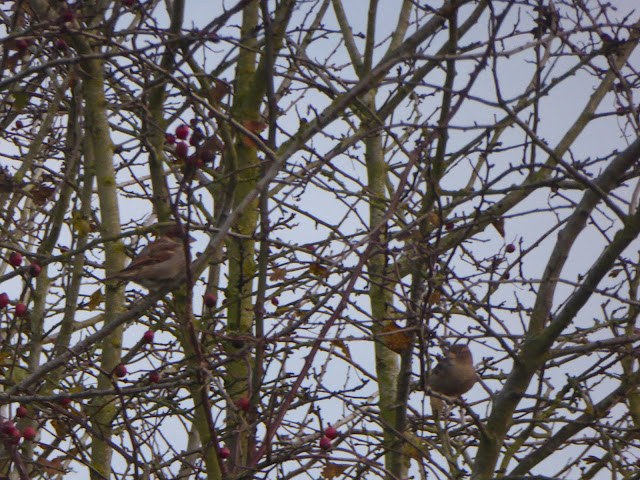 This is the fenman's cottage, showing the drooping heads of two sunflowers.
There were still a few bright orange bursts of marigold in the garden. 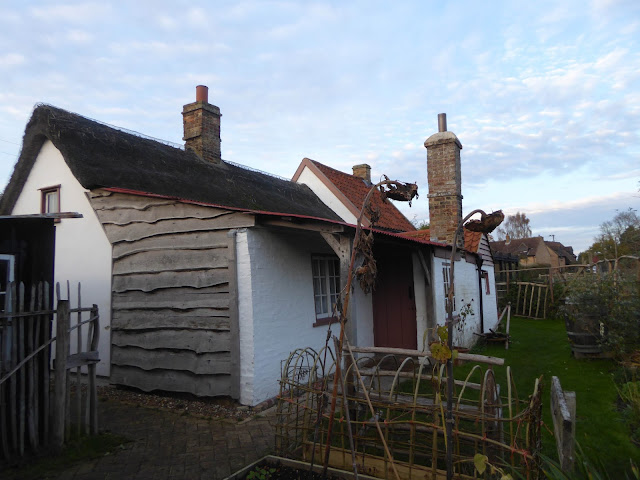 The sheds and outhouses hold an array of fenland bits and pieces... 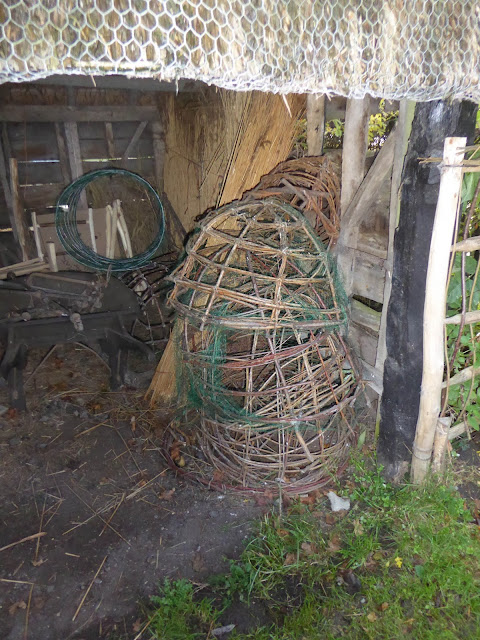 We are still adjusting to the hour change: this was probably only about 4pm... 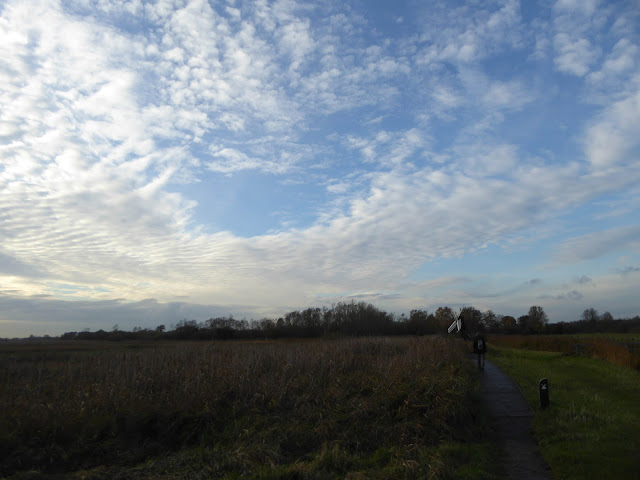 ...but we do love the drama of the wide fenland skies. 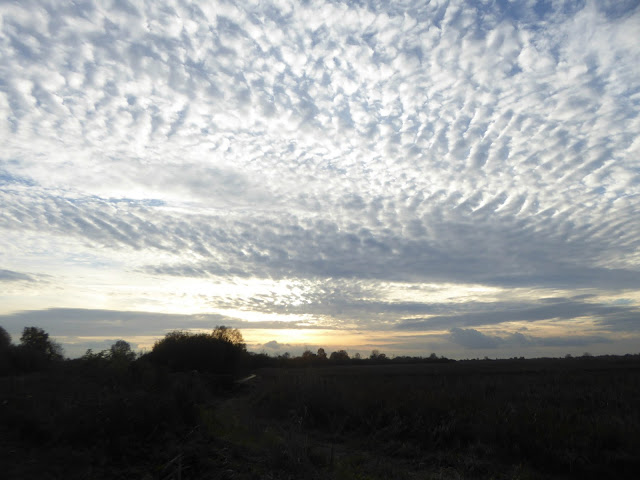 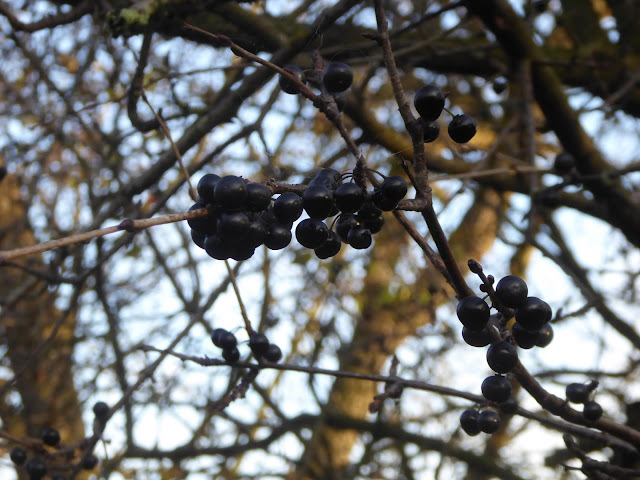 ... and this is one of the few insects we saw today.
I wonder if it is a species of Longhorn: I shall try to find out. 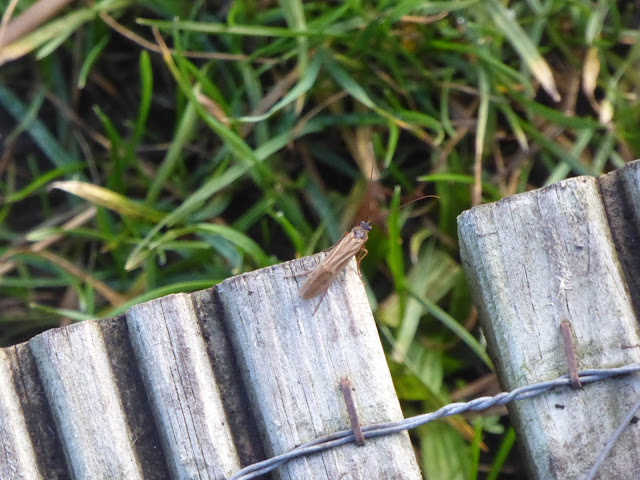 There were tranquil reflection... 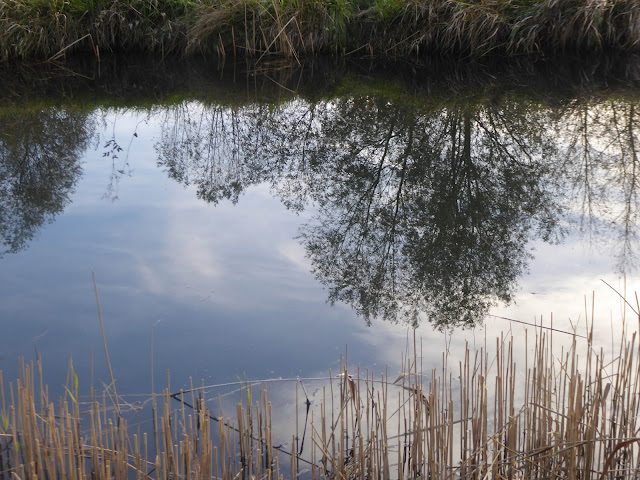 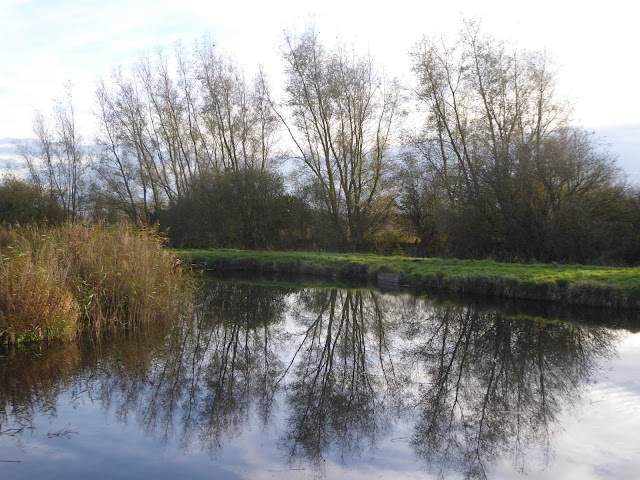 and a beautiful light at times. 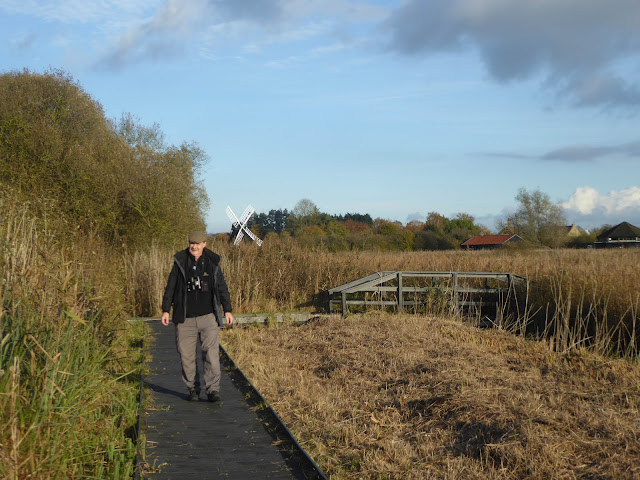 I am more of spring-to-summer person,
but I find autumn colours hard to resist... 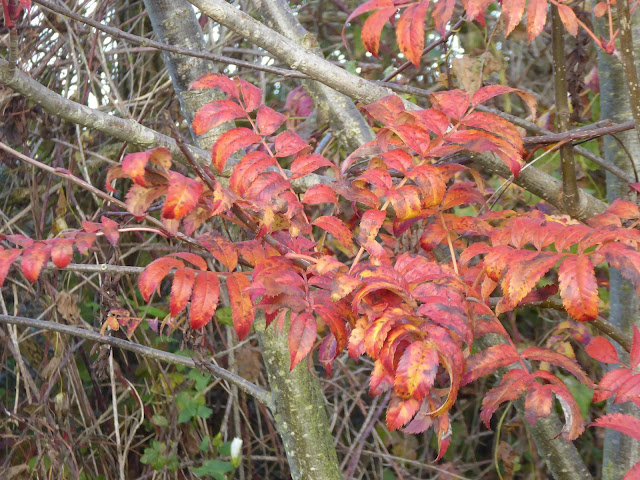 ... and, of course, each season
has its own abundance
of treasure. 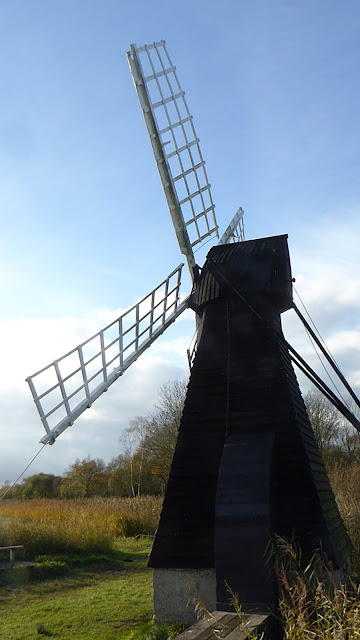 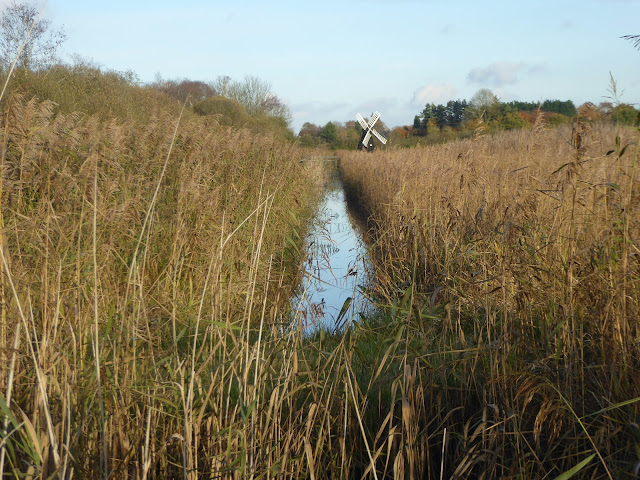 We saw a couple of Muntjac deer in the distance.
Here is one of them... 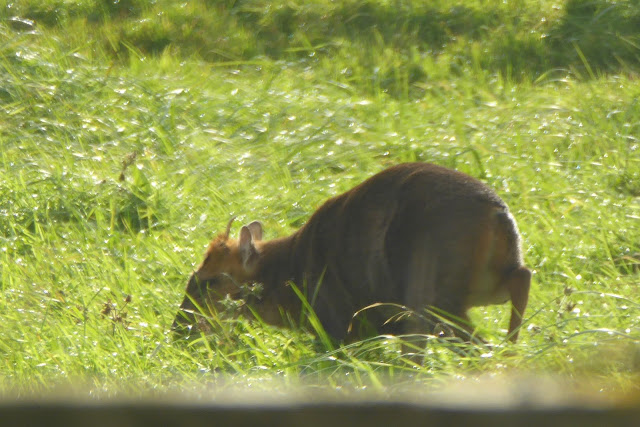 Due to damp ground, some parts of the reserve were fenced off,
but there was a new section to explore, a woodland walk... 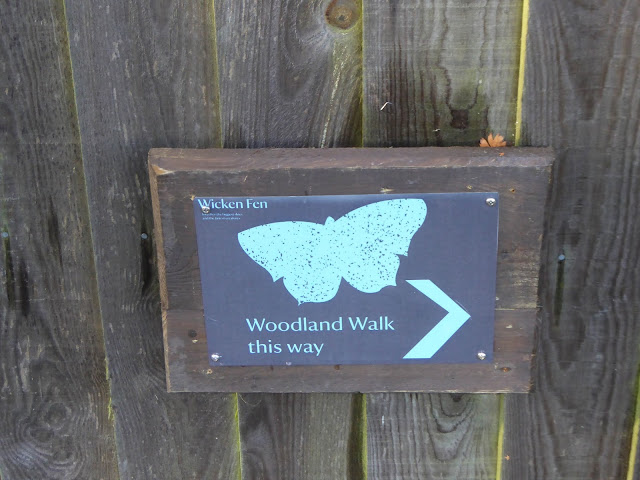 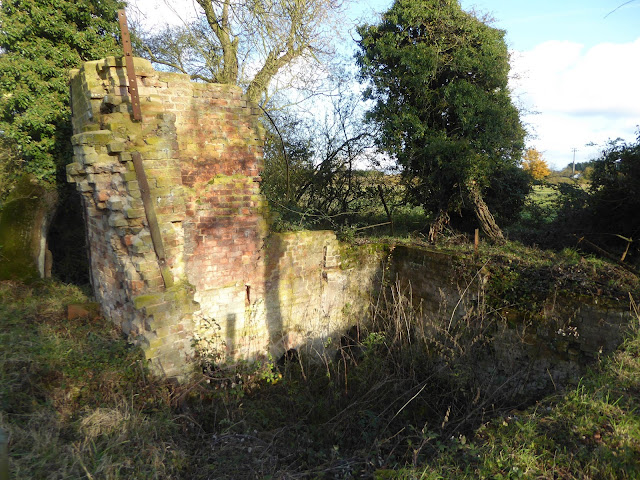 ...what I imagine may be an old pumping station. 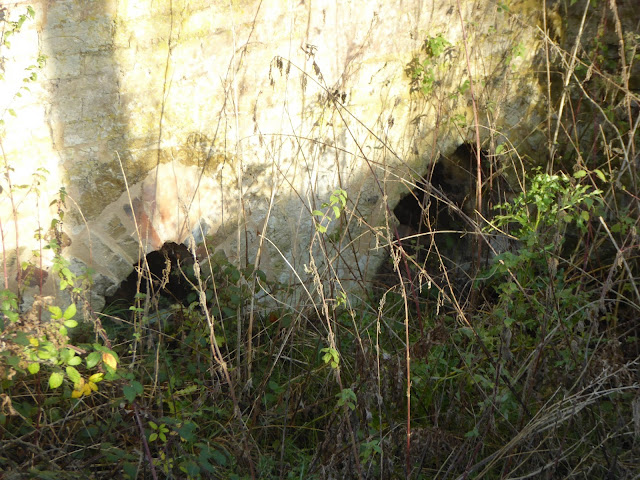 These arches above were presumably for drainage.


And finally, corvids began to gather as the light faded.
We enjoyed cups of tea in the gloaming before heading home. 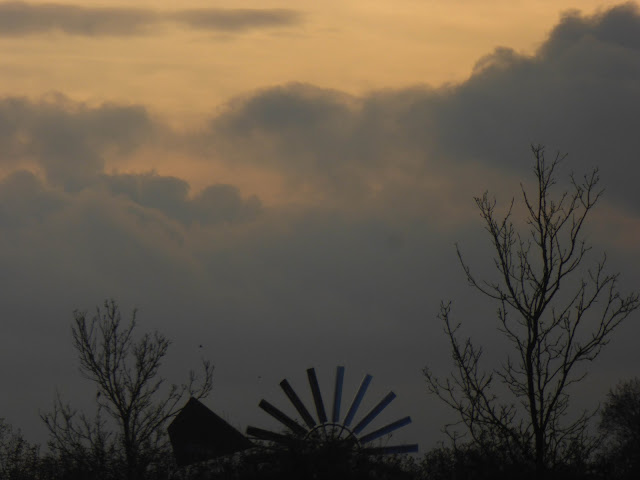 In my previous post I mentioned not only the #LostWords from the Oxford Junior Dictionary but also the chance, as part of the Land Lines project, to vote for your #favnaturebook ... There are so many excellent nature books being produced at the moment. In connection with my visit to Wicken Fen, I wanted to mention Cuckoo by Cambridge scientist, Professor Nick Davies. This beautiful and fascinating book is published by Bloomsbury; and many, possibly even most, of the cuckoos between the covers spend part of the year at Wicken Fen.
Posted by Caroline Gill at 21:23 4 comments:

You may have heard on BBC Autumnwatch that the AHRC has just launched a new initiative, Land Lines (see this post, too), to find the nation's favourite book about nature. Nominations of #favnaturebook choices can be submitted up until the end of November. I have so many favourites including classic and contemporary works, poetry and prose, fiction and non-fiction... and am finding it hard to shorten my list to a single title.

Much has been happening recently in the arena of nature words. It will not have escaped the notice of many that Robert Macfarlane's new book, The Lost Words, with exquisite illustrations by Jackie Morris, has just been published.

Chrissie Gittins, author of Adder, Bluebell, Lobster, a collection of 'wild poems' for children based on forty of the 'lost words', appeared on BBC Countryfile recently, exploring nature words with the current generation of youngsters.

Laurence Rose, a journalist who curates the Natural Light site, has posted a range of excellent material over several years. Do take a look at his pages.

I do not know what sparked the Land Lines initiative, but I do know that poets, journalists, naturalists and nature writers have been moved to express their views in one way or another in the wake of the nature word discussions. These began following the removal, some years ago now, by OUP of words such as 'conker' and 'acorn' from their Junior Dictionary, a reference book suitable for seven years old, in order to accommodate words that were considered more contemporary such as 'broadband' and 'analogue'.

I first became aware of this situation at the 2015 Norfolk Festival of Nature. I attended a session led by Mark Cocker and Margaret Atwood: I blogged about the event here. Sadly some of my links have now expired. Mark Cocker displayed his photographic images of many of the species that had been omitted.

Writers were already at work, and in the days that followed the festival, the news began to spread across the internet, and responses began to emerge, including A Lament for Lost Words by Malcolm Guite.

The nature words are not as outdated as you might suppose. They include the following:

It is clear that new dictionaries need to equip new generations of children (by including technology words etc.), but most of us would surely agree that it seems a shame to have to omit words like acorn, conker and poppy at a time when we are all being encouraged to care for the world in which we live, and to exchange our screens every so often for exercise, fresh air and time out in the natural world.

I know this is not a view held by everyone, but I am a strong supporter of names: I feel that we are more likely to take an interest in, or care for, something or someone if we can learn the name. The Poetry Daily for 1 November has posted 'The Wild Geese' by W.S. Merwin: you may feel this is a slantside look at the subject of names in the context of survival or extinction, but it seemed to me worth a careful read and a link, which I post here.

For many of us who grew up in urban or suburban environments, our affinity with the natural world was formed not only by walks at weekends and by holidays in the countryside, but also by nature books. In my case these included The Wind in the Willows by Kenneth Grahame, The Secret Garden by Frances Hodgson Burnett and the Ladybird book of What to look for in Autumn. You can see which books some of our wildlife advocates have chosen here. Do see if you could set aside a few minutes to cast a vote for your #favnaturebook...

P.S. Since drafting this post, I have finally whittled my favourite nature book list down to a single volume. I have written the allocated 100 words in support of my choice and have uploaded the information on to the site. Books that make the final shortlist will be revealed on 4 January 2018. Selecting a book and writing in support of it was an enjoyable exercise, as I hope you may also discover. Happy writing... and please click on the comments left by readers below!

P.P.S. Who could resist some of these regional bird names from the Muir of Dinnet National Nature Reserve blog? And do take a look at Jessica Groenendijk's list of children's nature stories.

P.P.P.S. My thanks to Kay Weeks for this fascinating link - here - from the Cornell Lab.