I wonder what species you have noted so far this year in your neck of the woods? I have also seen the following: -

I have yet to see my first Butterfly of 2011. I recall spotting my first one year on 14 February in the snow!

Postscript: you might enjoy this post about what birds can do in Israel ~ thanks, April!
Posted by Caroline Gill at 22:33 3 comments: 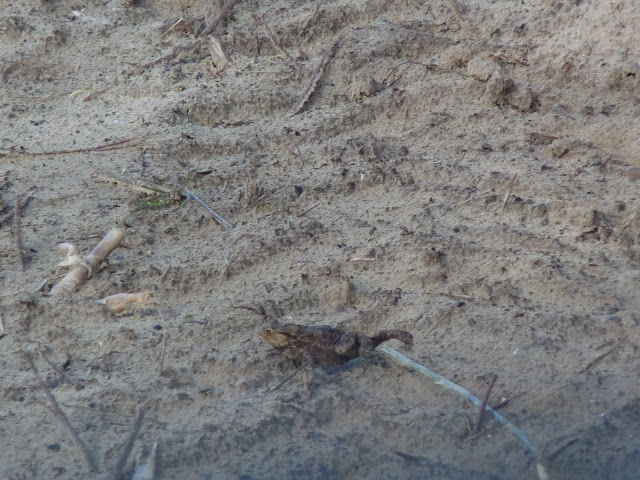 We had greatly enjoyed Adam Tilt's account of his heroic Toad Rescue in Burry Port, so were aware that Mr - & Mrs - Toad might be out in the spring sunshine. Nevertheless, we were somewhat taken by surprise as we scanned the scene from the hide in Pembrey Country Park, for a warty creature was making its way down towards the water's edge before our eyes.

Postscript: 2 March ~ I have been keeping an eye out for frogspawn - without success thus far. My first sighting of the year is 'virtual' spawn here on Lletty's (Carmarthenshire) blog ...

The Tree Year (3): More Winter Visitors at the Larch 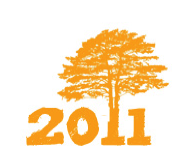 Welcome to my third post for The Tree Year
about the Larch I am watching.
This tree is in Carmarthenshire, South Wales, UK.

For those who may not know, the Larch is a deciduous conifer from the Pinaceae family. We usually think of conifers as evergreen, but this species loses its needle-like leaves each autumn. The tiny cones ripen approximately 8 months after pollination. There are Eurasian and North American species. Larch wood is waterproof and hard-wearing - and used in the boating industry. It is also used for the building of houses in Central Europe. Scottish cabers, used in the sport of 'Tossing the Caber', are made from Larch.


Of all the birds listed, the Starling is the only one to have RED conservation status. I know there has been a huge decline in this species, but, strangely, these are the birds we most often see at home in the Swansea area of Wales, UK. There was no sign on this occasion of the Grey Squirrel or of the Nuthatch. We saw a flock of geese in the vicinity: I must check my husband's photos for these. The fresh green growth of new Larch should be more in evidence on our next visit. I wonder what other changes we will observe then! 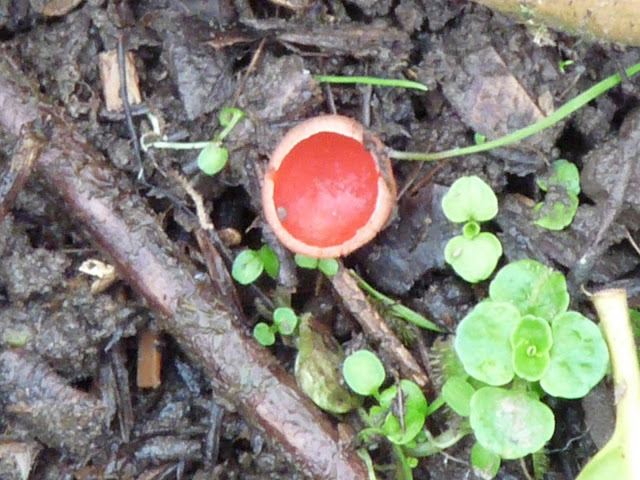 I was looking out for Spring flowers as we walked around the gardens at Aberglasney last weekend ... and my eyes alighted on these curious red circles. I feel they have sprung right out of Wonderland, alongside the caterpillar with his hookah! Five carotenoid pigments are responsible for the stunning colour.

I have come across these 'fruiting bodies' before, but have never known what they were - other than that they were examples of fungi. This time I was quite happy with my identification of 'Scarlet Elf Cup' aka 'Scarlet Cup Fungus', when I discovered on the Gower Wildlife blog that there are two almost identical saprobic species ... Sarcoscypha austriaca and Sarcoscypha coccinea.

Slugs devour this fungus during the summer months, and rodents have been known to eat it during winter. I noticed a vole hole almost adjacent to one of the Elf Cups.

You can see a fine illustration here (if you click and scroll down a little) of the coccinea species, by the French pharmacist, Jean Louis Émile Boudier (1828 - 1920).

Beside the Sea (2): Shells at Llangennith

I mentioned in my previous post that I would add the shells we saw in a separate entry, so here they are. I saw them all as I walked along towards the high-tide island of Burry Holms at the north-western extremity of the Gower Peninsula.

Postcsript 2014: please read comment below by Craig Howells for a further (corrective) note concerning the mention of a 'hill fort' at Harding's Down in this post.
Posted by Caroline Gill at 22:23 5 comments:

Labels: Beside the Sea, Gower, shells 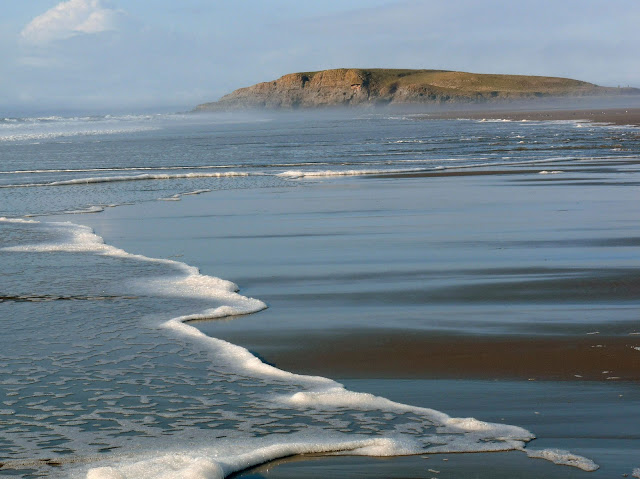 We took a stroll along Rhossili Beach at the western end of the Gower Peninsula from Llangennith towards the promontory-cum-island of Burry Holms on the north-western tip. There was a terrific surf and a lot of foam along the edge of the sea. 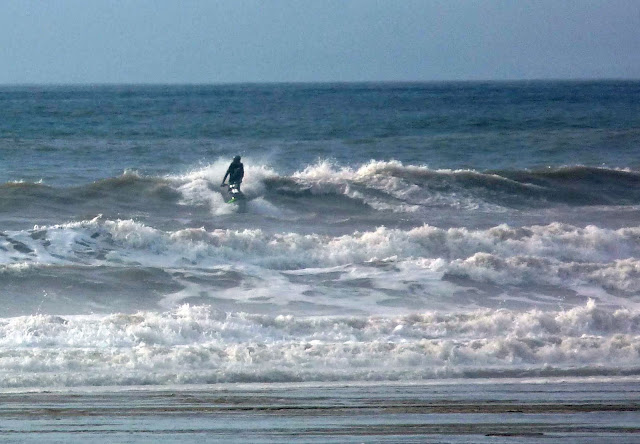 I took this photo below as I looked back towards Worm's Head. I was shooting into the sun, hence the grayscale appearance. 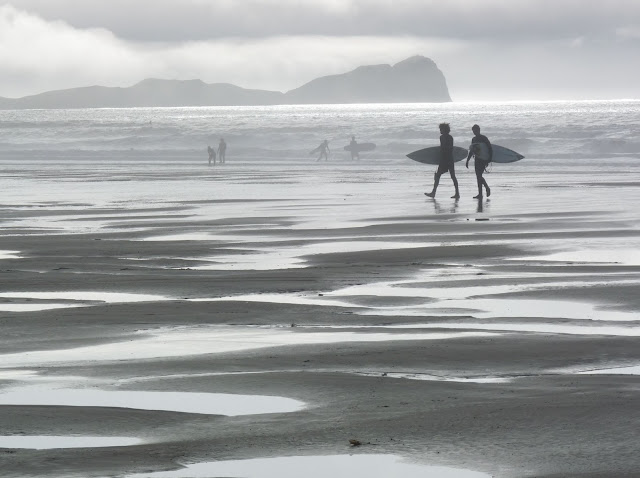 There was a strange mist sweeping in and out. 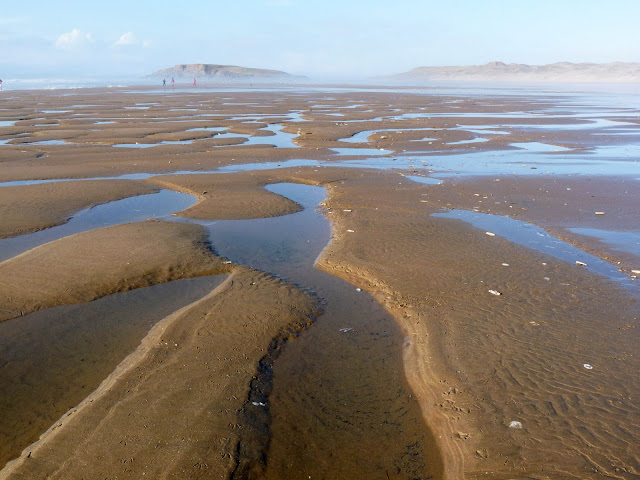 There were not many birds in evidence, but judging from the cracked shells, they frequent this huge expanse of sand in large numbers. 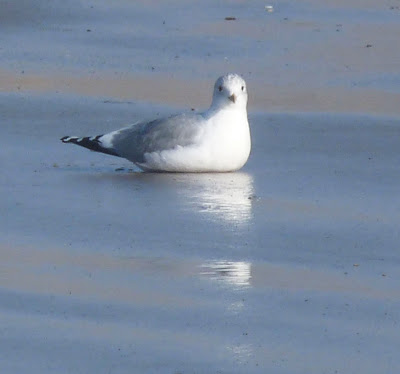 I found this stash of rather unsightly left-overs from a bird's meal (see below). Perhaps you know whether these are bits of Starfish or Sea Cucumber (Thyone fusus) . . .
I am wondering if they match the images here against the entry for 16 March 2008? In any case, it may interest you to know that there is a book of haiku on the subject of sea cucumbers (and other creatures) called 'Rise, Ye Sea Slugs: 1,000 holothurian haiku', compiled and translated by Robin. D Gill (Paraverse Press, Key Biscayne, Florida: 2003, reviewed here, lower right). 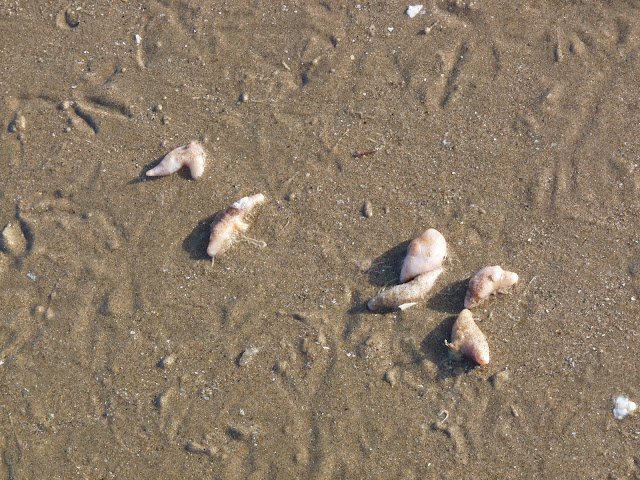 Burry Holms becomes an island twice a day as the tide comes in. The promontory boasts an Iron Age fort and the remains of a hermitage or chapel, supposedly built by Caradog in the 11th century. The site is dedicated to St Cenydd (as in 'Llangennith'), who lived during the 6th century. 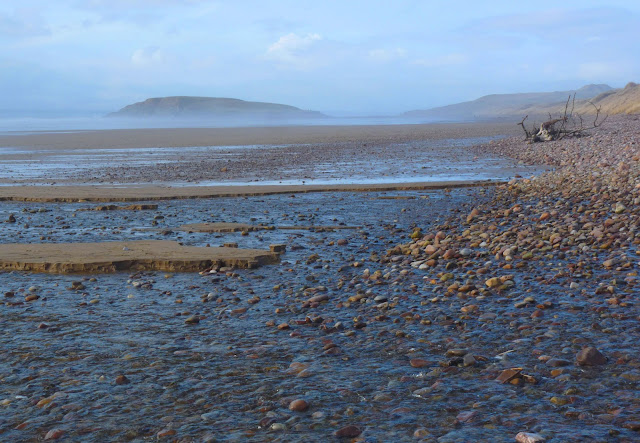 On our way back to the car, I was amused to find this official yellow sign pointing to a rather watery public footpath ... 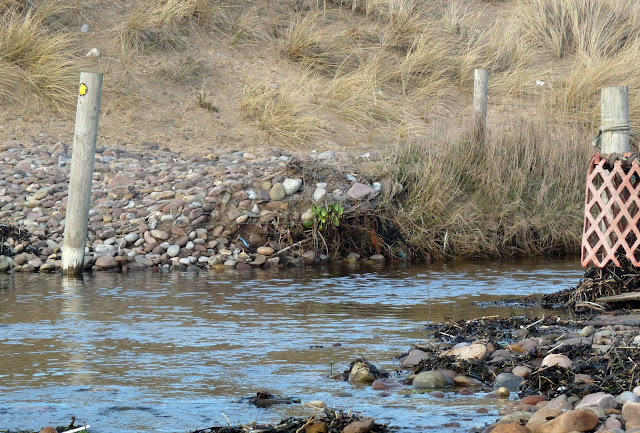 I will add my shell photos in a future post.