I gather this is a common Hoverfly in the UK. The twin stripes (one large, one small) make identification relatively straight forward. This tiny insect was sucking nectar in a white Pelargonium in the garden this morning. I gather it eats aphids ... there are a lot of Blackfly on the nearby nasturtiums! 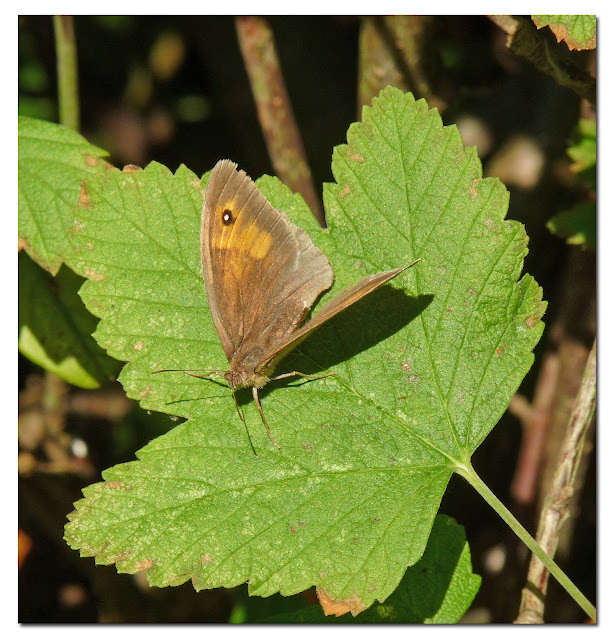 There were few butterflies about in the garden, but this Meadow Brown stayed still just long enough for a couple of photographs. It was the first time I had seen this species around our home and it made me realise that I should do an updated tally of my Home Patch recordings soon.

There has been little sunshine today, but now it's looking just a little brighter, so perhaps a few more butterflies will take wing. 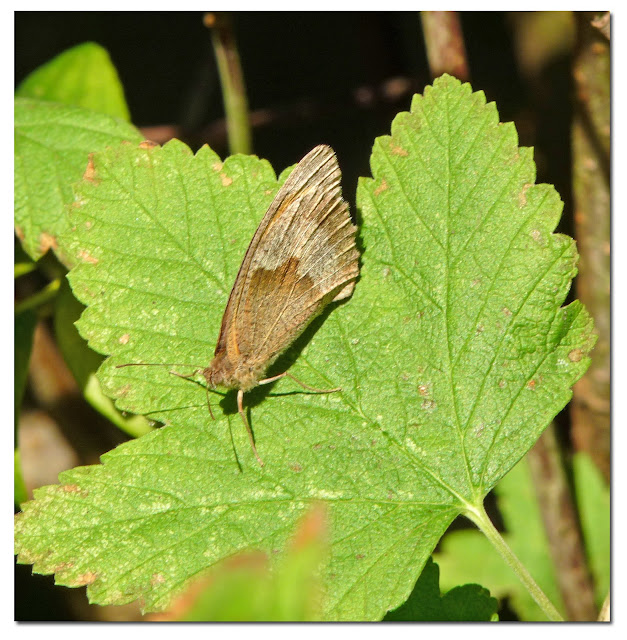 Did you know that we are nearing the end of the 2012 National Whale and Dolphin Week, an initiative of the Sea Watch Foundation?

I am unlikely to see any whales or dolphins in the next couple of days, so I thought I would mark the week with a few photos of dolphins I have watched off the British Isles. Mind you, it seems as though there are Killer Whales not too far away: you can read about a recent sighting up the coast, off Bacton Beach in Norfolk. You can read about a previous sighting here. I have also been reading the Whales in Wales report of Risso and Common Dolphin sightings off West Wales. 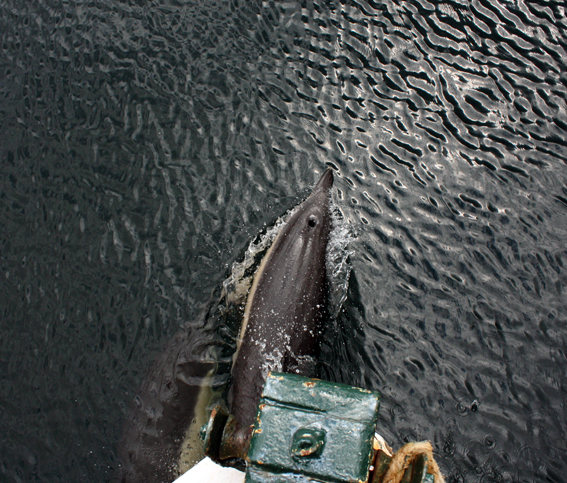 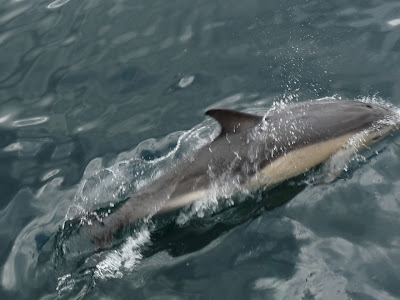 Do leave a comment if you see any whales or dolphins off Britain. If your sightings are in the Scottish Hebrides, do record them on the Hebridean Whale and Dolphin Trust site here.

Sadly, the only real whale I have ever seen in the UK was a dead one many years ago, washed up on a beach in Cornwall, so for my whale photo, I shall have to make do with this Britain in Bloom sculpture in Whitby. The wood has found a new future as a whale, and my hope is that now that our whaling days are past, these magnificent mammals will continue to inhabit our oceans.

At first I thought I noticed a bee on our fence, but then I realised that the insect only had one pair of wings showing, so I began to suspect a Hoverfly. It seems to be a Pellucid Fly, Volucella pellucens, which you can see on this site, if you scroll down. You can read more about it here.

I associated the word 'pellucid' with (sea) water, and in fact it can mean 'limpid' (as in a favourite translation of Aristophanes' comedy, 'The Frogs', in which the frog chorus inhabit the 'limpid lakes'), or 'clear' in the sense of admitting the maximum passage of light. I imagine this may refer to the wings of the fly, but perhaps it refers to the distinctive alabaster-like band! 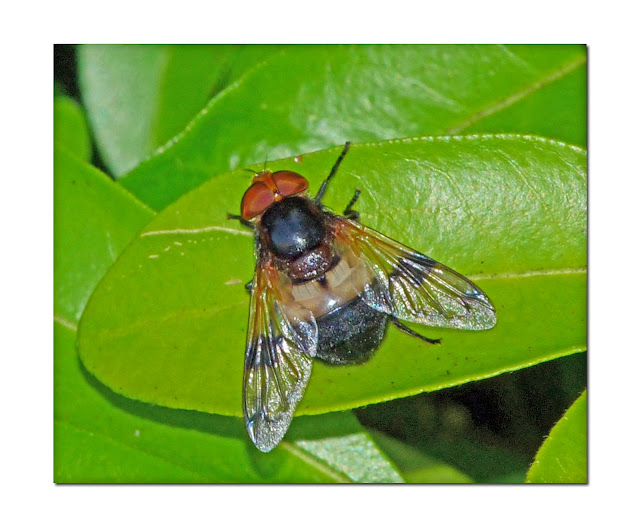 I know shamefully little about moths!

I could identify a brightly-coloured Burnet moth or a Cinnabar moth, but that is about all. I wasn't even sure when I began to type this post whether the offspring of the moth in the photo above were about to eat my clothes. It's about time I learned a bit more.

It is National Moth Week in North America, and although I'm UK-based, it seems a good idea to join in. I am very grateful to the self-styled novice naturalist of Rambling Woods for her inspiring post.

I have been an admirer of Canadian naturalist, Seabrooke Leckie's blog, The Marvelous in Nature, for some time now. You can read her post for National Moth Week here. Seabrooke has just co-authored The Peterson Field Guide to Moths of Northeastern North America with David Beadle.

Enjoy moth-spotting, and keep an eye on your wardrobe!*

* Note: Our UK clothes moth (Tineola biselliella - or Tineola bis-selliella, according to The Independent) does not flutter around our lights. It seeks out dark places like wardrobes for breeding. The egg-laying female is surprisingly small, perhaps a centimetre in length. After some days her eggs, often laid on our natural fibres, start to hatch into larvae. These can spend a year or two eating away at our best clothes! I will try to ensure that wardrobe doors are kept closed ...

Butterflies and Moths (11): Near Snape 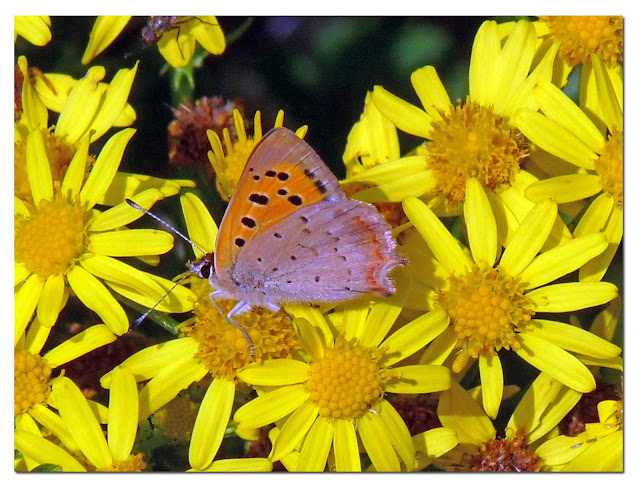 The butterfly above is, I believe, a Small Copper. The bright sunlight has affected the level of iridescence and made the outer wing look rather purple! These Ragwort flowers near the River Alde in Suffolk were a magnet for lepidotera ... 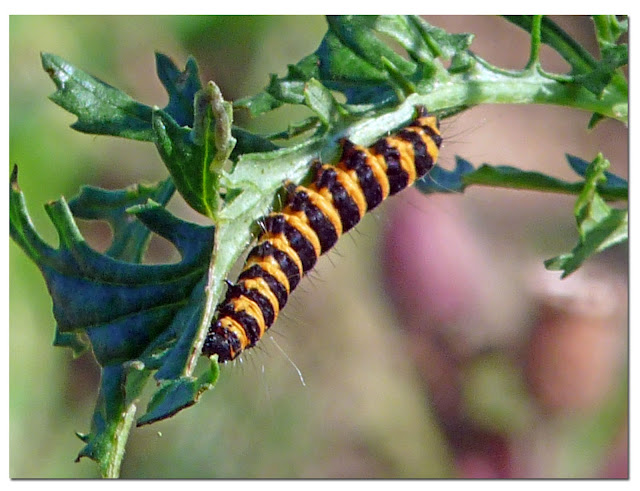 This tiger-like caterpillar will develop into a Cinnabar Moth. Cinnabars have a lengthway stripe while Burnets have spots. 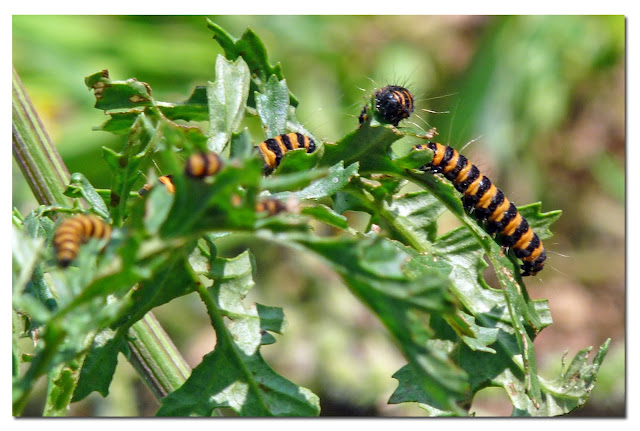 P.S. There were some Large White butterflies in my garden today, but they were too fluttery to photograph! I would encourage those of us in Britain to follow Sir David Attenborough's advice and take part in the Big Butterfly Survey. If you click the link (or this one here), you will also be able to read about the part M&S are playing in encouraging their farmers and customers to look out for butterflies.
Posted by Caroline Gill at 15:37 3 comments:

We were a few metres from the car at Iken Cliffs, on a walk back from Snape Maltings, when something caught my eye on an old tree stump. It was a female Common Lizard. She wasn't exactly basking in the sun, but I suspect she had been lured out by the warm temperatures. She was fairly well camouflaged, in her shadowy spot. These lizards are also known as Viviparous Lizards: they bear live young in cold areas and lay eggs in locations where the climate is warm. They tend to choose habitats with a mixture of sunlight and shadow, with open space to bask and cover for protection. 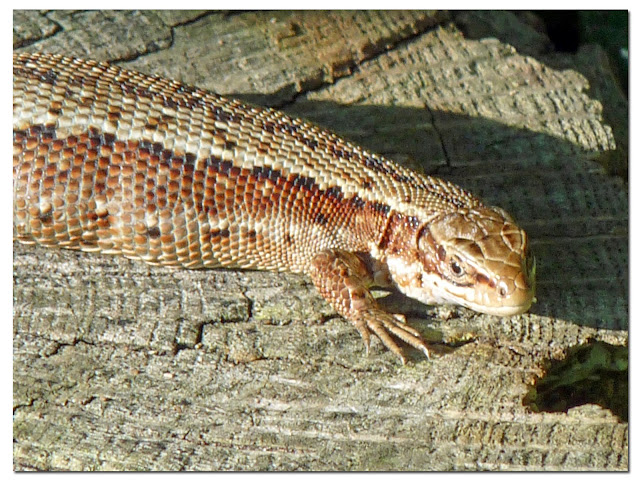 I love the way in which the scales of her skin blend with the markings of the bark. 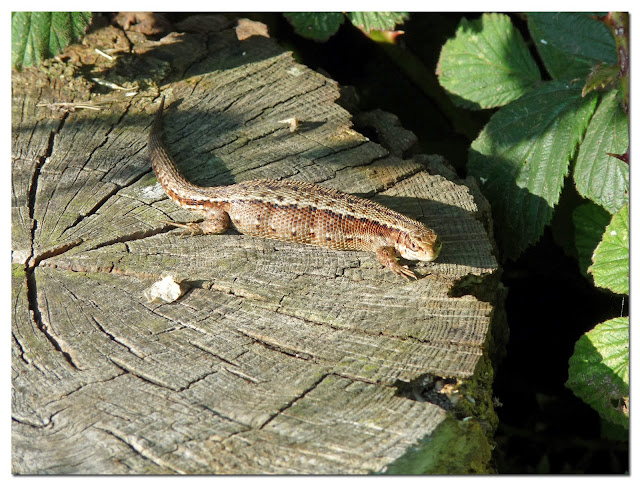 I wished I had had a bit longer to observe her, but there were other people coming up behind us on the narrow path, so we had to make way for them. This was my first lizard of 2012 ... and a fine specimen!

Butterflies and Moths (10): At Sutton Hoo


Seriously, I was thrilled to see a good number of butterflies, particularly since I haven't noticed many this year. I must go again soon, and do the Big Butterfly Count.

Oh, and I also some Skylarks and other creatures ...

We spent some wonderful hours at WWT Welney, and although the weather could hardly be described as a perfect summer day (dream on!), we thoroughly enjoyed all that the reserve has to offer. The highlights on this occasion were the mammals ... water voles (the prototype 'Ratty') and hares, but there were also other stars such as Avocets and grasshoppers. 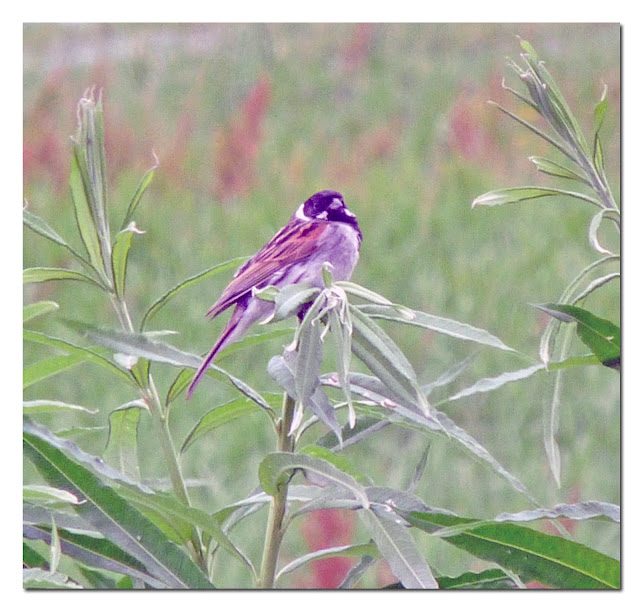