This post is the fourth in my Tree Following series, part of a wider project run by Lucy Corrander from the Loose and Leafy blog. I am following a Silver Birch in Suffolk, UK. You will find the other Tree Follower links for June 2014 here ... so do take the chance to go on a virtual exploration of the arboreal world! 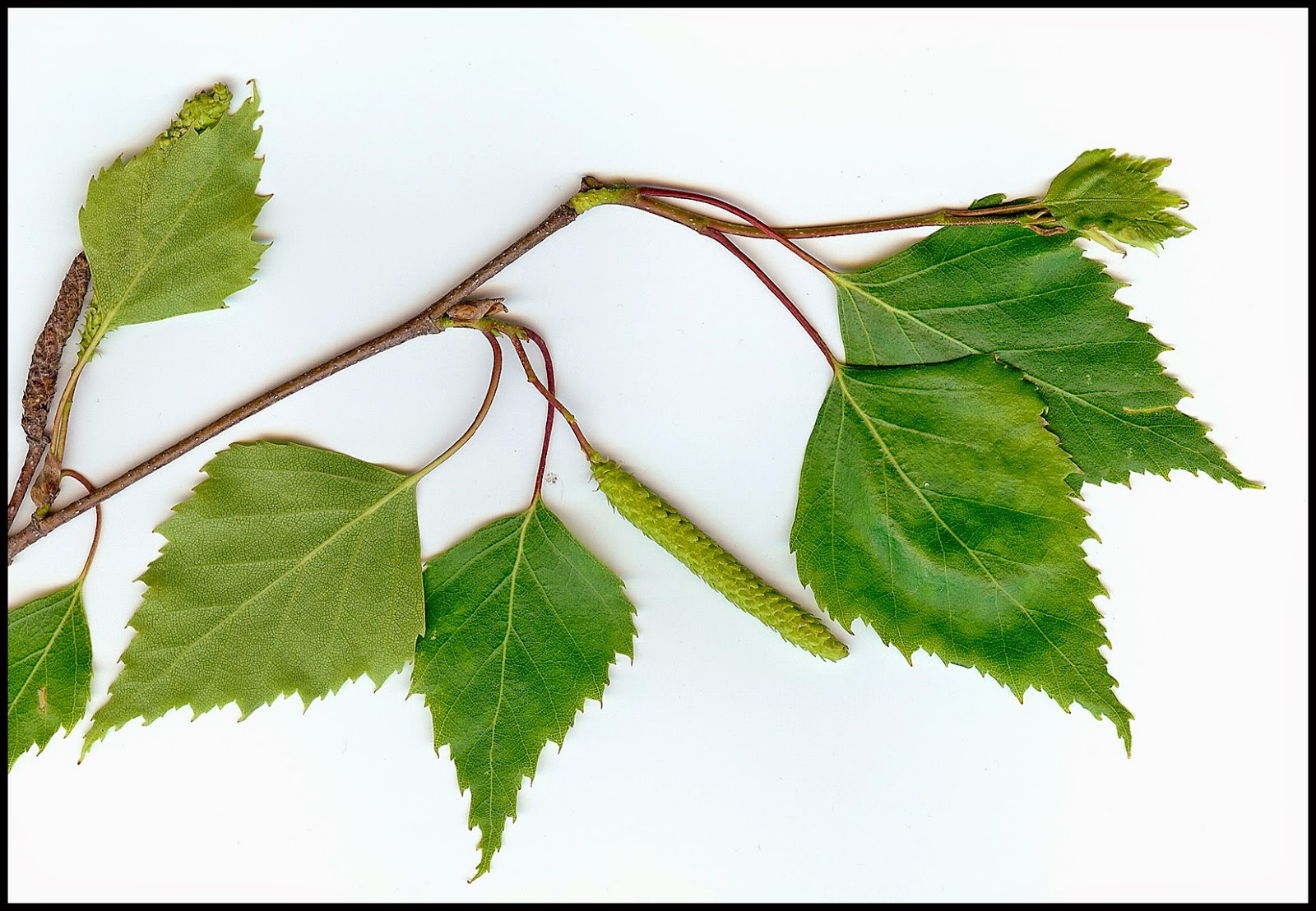 My Silver Birch (B. Pendula) has been looking green and leafy since my last update. The photo above was taken on 10 May, shortly after I posted my May bulletin on Mr Linky.

The weather has been mixed so far, with grey cloud being a dominant feature. The temperatures have been mild but it has been cool at dawn. The Blue tits are probably the most frequent visitors to the coconut feeder on the Silver Birch - and as predicted, the roses are in bloom. 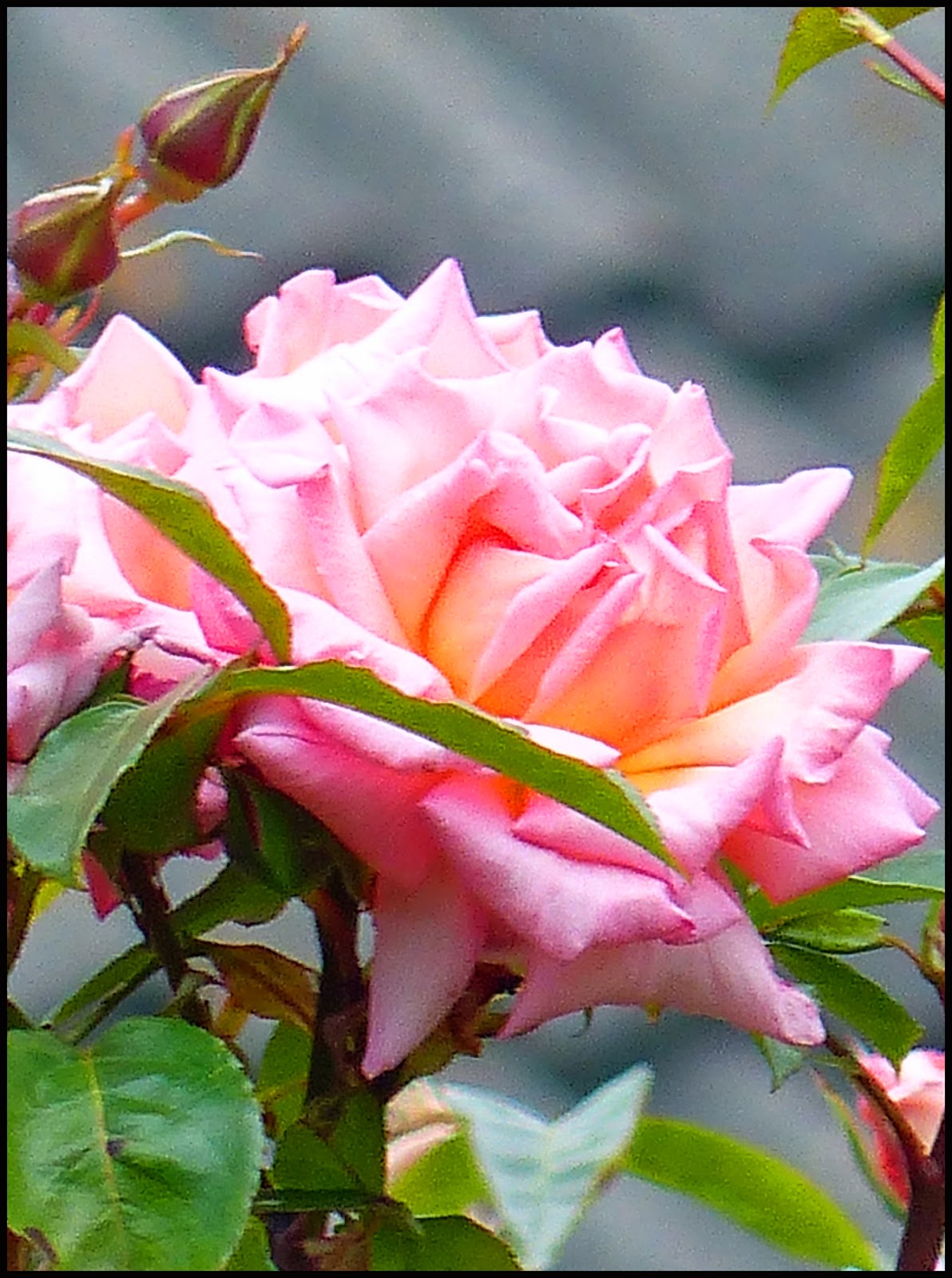 The month (by which I mean the weeks between posting my May and June TF reports) began with a slight concern. I noticed another birch nearby, and began to wonder whether I was right in identifying this one as a Silver Birch after all!

The two trees seemed similar at first, and in fact, I had not noticed that there were differences. Something twigged (sorry), and I began to realise that the two were by no means identical. I erroneously assumed at this point that the other must be a Downy Birch - purely on the grounds that it differed from my tree.

However, I looked a bit more closely, and noticed that the leaves on 'the other tree' were more forked and less saw-edged than my tree. The other tree's leaves had deeper indentations than the leaves you see above. They also appeared a bit more like a squashed maple leaf and less like the shape of a kite.


Thanks to Dr D.G. Hessayon's book on trees and shrubs, I have come to the conclusion (and I hope I am right) that my birch is indeed a Silver Birch (B. Pendula). I believe that the other tree is probably the Swedish Birch, B. pendula 'Darlecarlica'. It is not in my gift to photograph this one, but you will find a good picture here.

Mystery solved! I feel somewhat chastened to think that it has taken me this long to make this discovery, but there you go.

I decided to tighten up a bit on my bird observations, so I began to chart the birds I saw on my (B. Pendula) tree or on the feeders hanging from its branches to see if any daily patterns or surprises emerged.

Sightings include (roughly in order of frequency) ...

I also have a new bird species on the block, the beautiful Goldfinch (TFb13). I had planted up some bedding plants in a pedestal planter on the patio, when minutes later I looked out to see two Goldfinches perching on the metal rim. One flew up into the Silver Birch while the other plucked some strips of fibrous hanging basket liner, presumably for a nest. The Goldfinches returned today, and I am really hoping that they will stay around as they are such colourful and delightful birds. You will notice that the one below is not on my Silver Birch! Sadly I didn't have my camera to hand when the Goldfinches landed, but these are such fine birds (despite their messy nests) that I wanted to re-post an earlier picture.

The only other new bird to settle in the vicinity of the Silver Birch was a sleek brown one with a slightly speckled chest, slightly larger than a Satrling. I didn't think it was a Mistle Thrush as its speckles were not very pronounced. I wondered if it was a female Blackbird like this, although its eye markings were more prominent. Today I saw the bird again in the company of three other juvenile Starlings - mystery solved, I think!We also think we had a fleeting glimpse of a Coalt-tit, but are not entirely sure. This would be another new species for my Silver Birch birdlist, but I won't add it until it re-visits and I can be sure.
There have been no further sightings of ...

However, the members of the Blue tit brood have delighted us with their antics on and around the coconuts that hang from the Silver Birch. 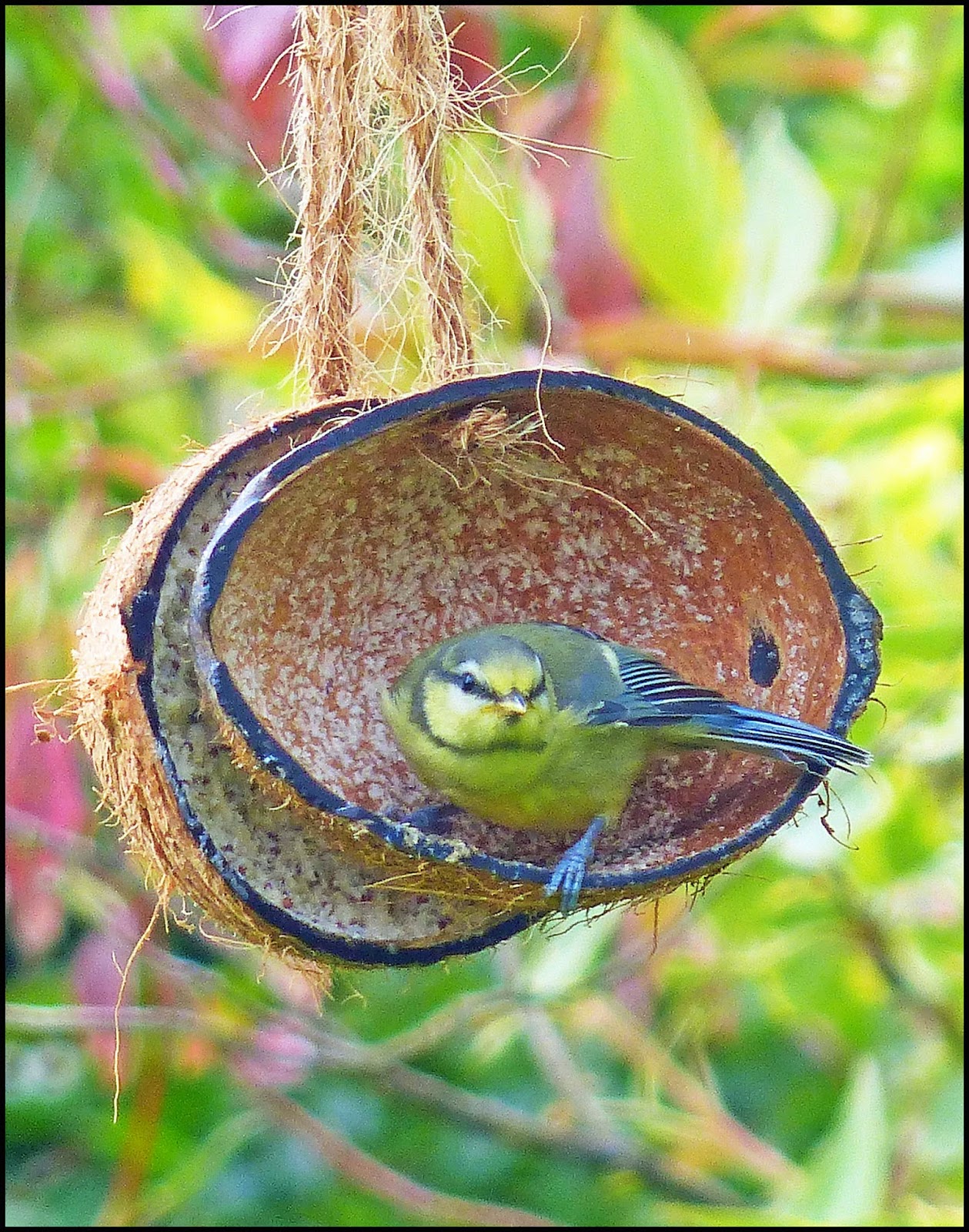 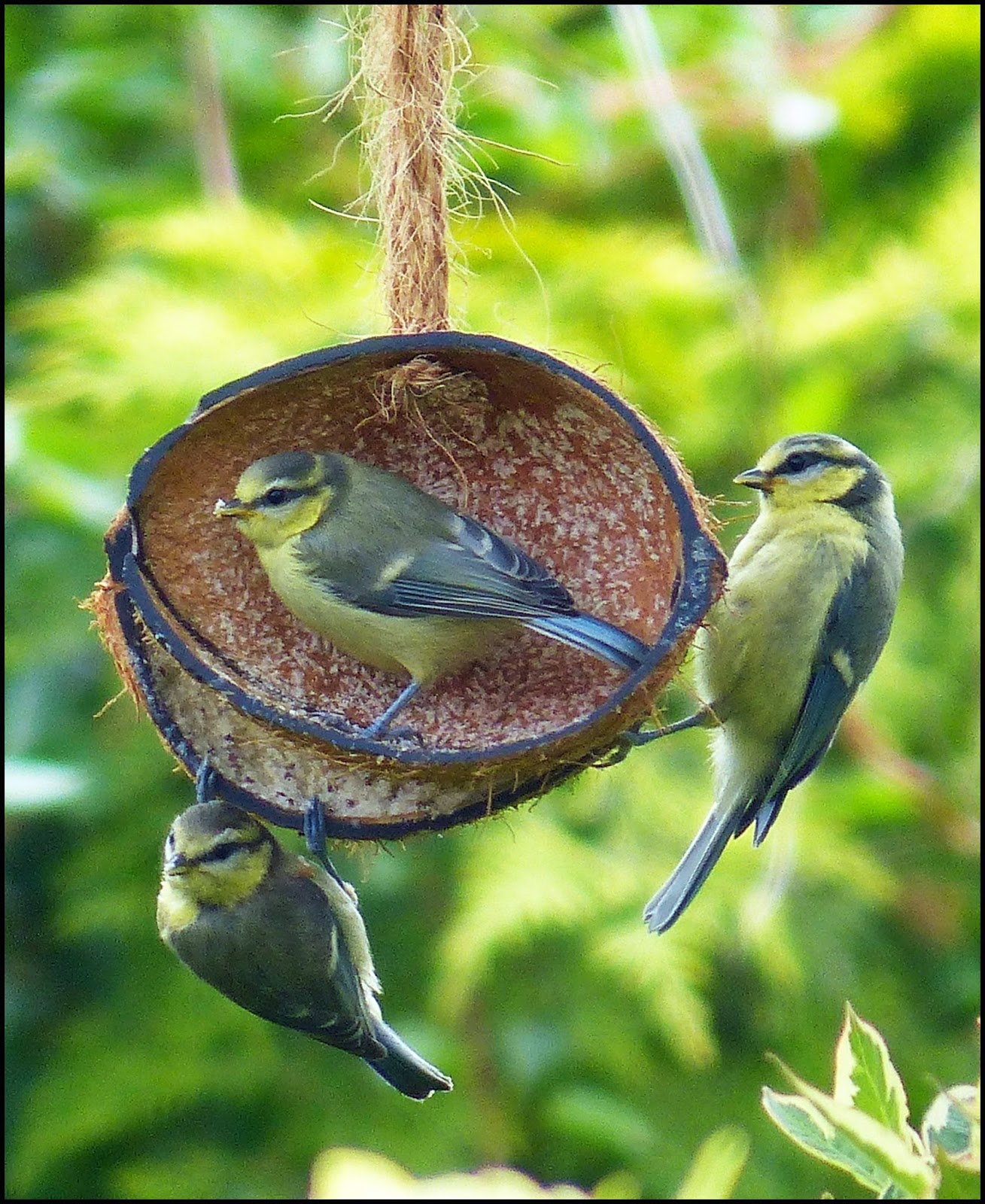 The main insect immediately below the Silver Birch was a large Garden Chafer (Phyllopertha horticola). It was busy devouring a leaf when I looked down and saw it. According to the RHS, this species can cause a lot of damage to lawns. 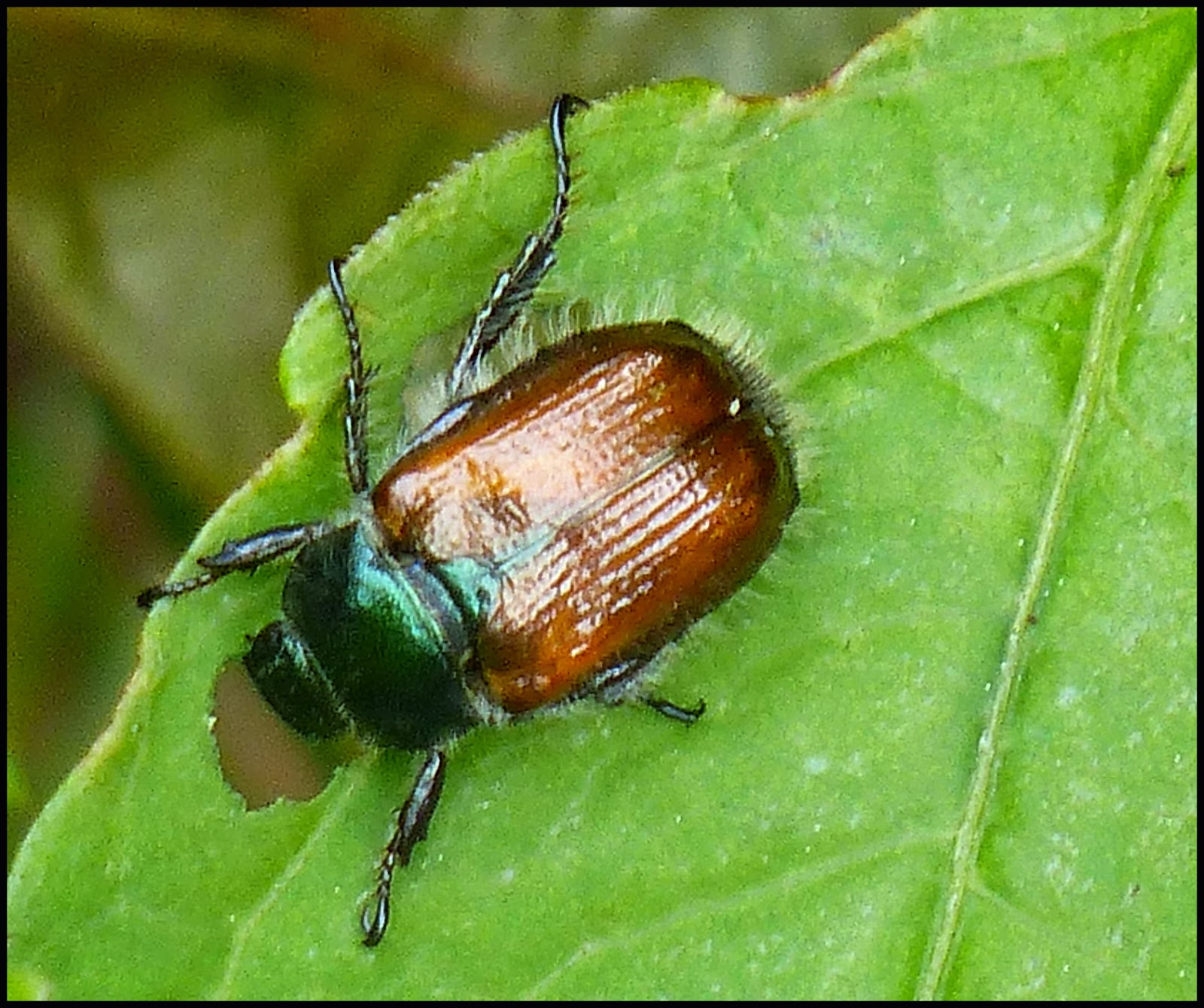 We have been very excited this month as BBC Springwatch has come to our (relatively) local nature reserve, RSPB MInsmere. I first spotted the colourful Ruby-tail Wasp on the Minsmere site back in August 2012. It was scuttling over the surface of a wartime tank-trap. I am delighted to report that I have had several more sightings of this unusual insect on sunny days on the wooden posts around my patio, metres from the Silver Birch. Of course, the juxtaposition between the birch and the wasp may be of little significance: who knows ...


I am sitting at my window as I type, peering out into the semi-darkness. We have had bursts of warm sun today. We have numerous moths flying around the kitchen and a pair of skittish bats in the garden, flitting alongside the feathery forms of the Silver Birch branches. It will soon be the longest day. 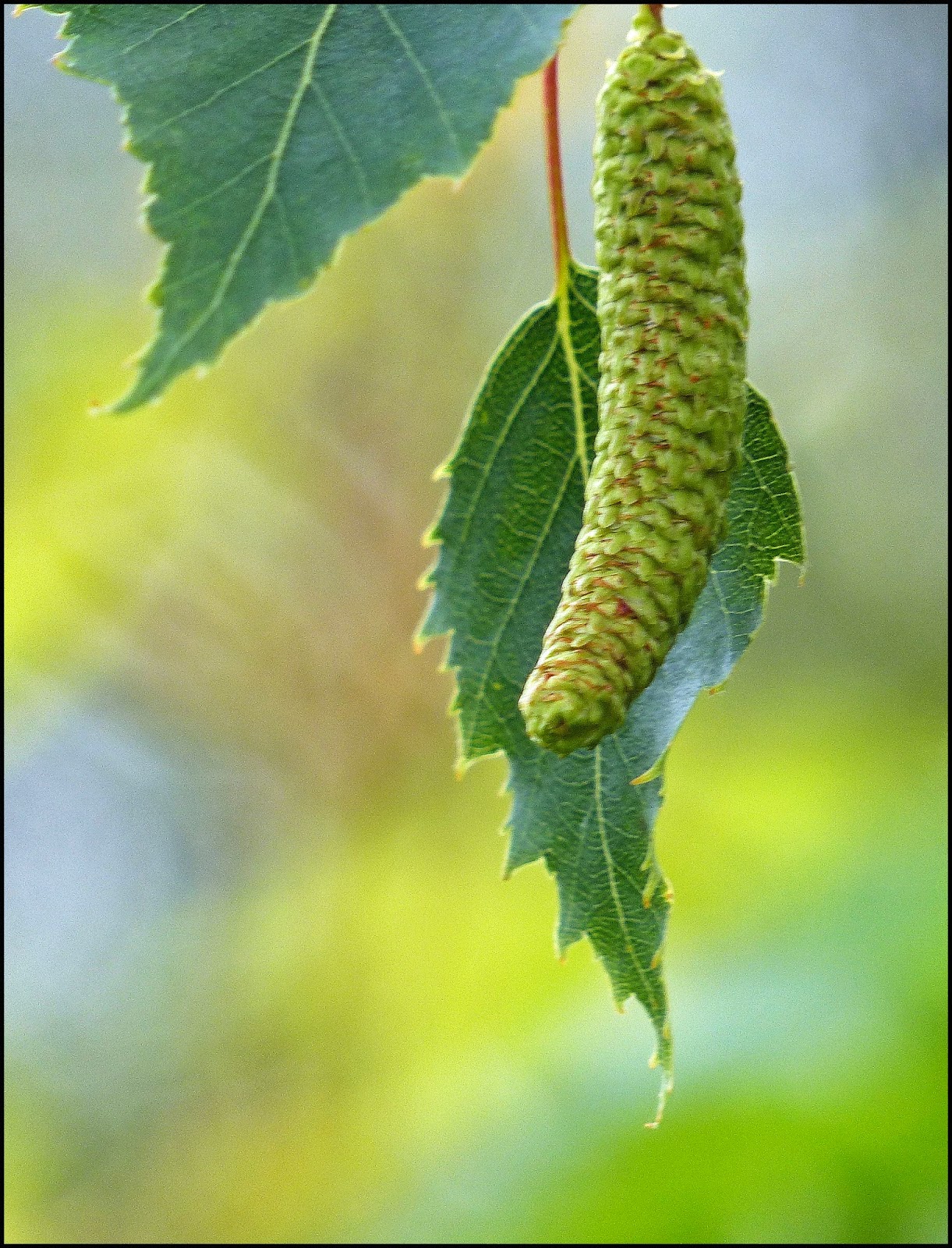