This post comprises a miscellany of photographs from our weekend. The welcoming sign below greets you as you enter the RSPB Wildlife Garden at Flatford. 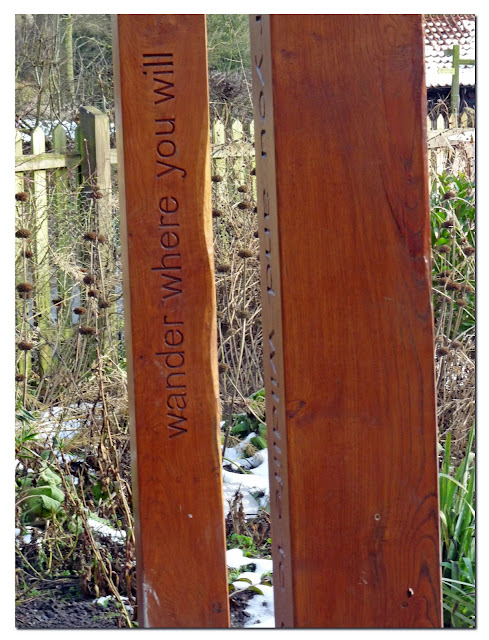 As you can see, there was still some snow around on Saturday. There was also quite a lot of frozen water. The Moorhen below was lifting her large yellow feet very gingerly. 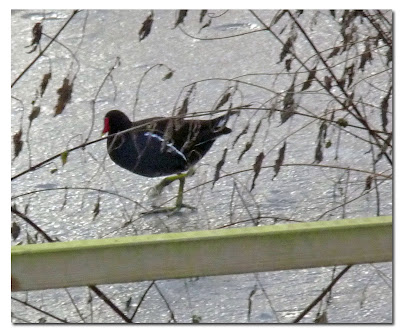 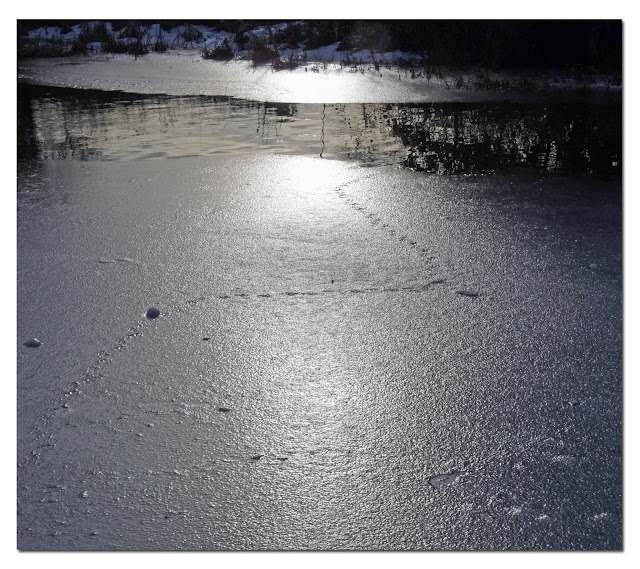 The copse below was looking particularly beautiful ... 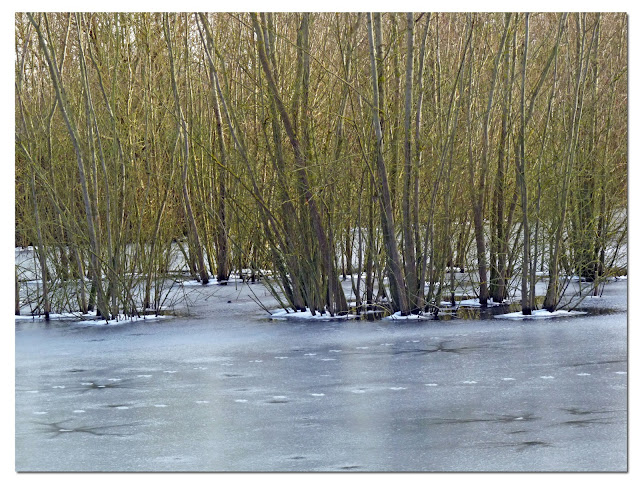 I wonder whether these tree roots above are always submerged.

The Mallards were skating around a bit at the water's edge! 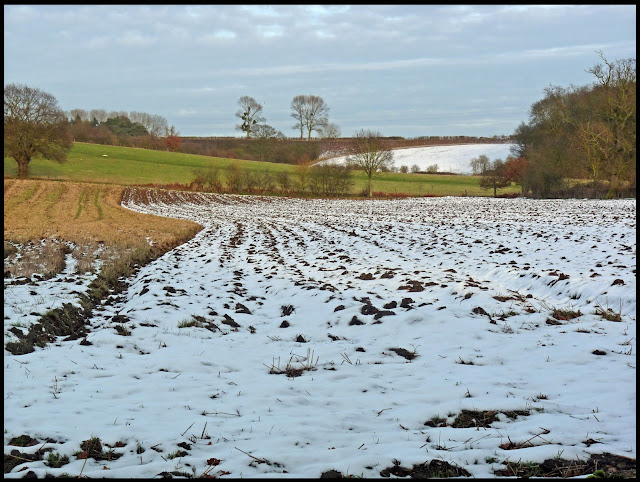 The landscape above reminded me so much of my rural Norfolk childhood. This part of Suffolk is definitely more undulating, but I recall those snowy plough lines with much affection. There were several pheasants about. 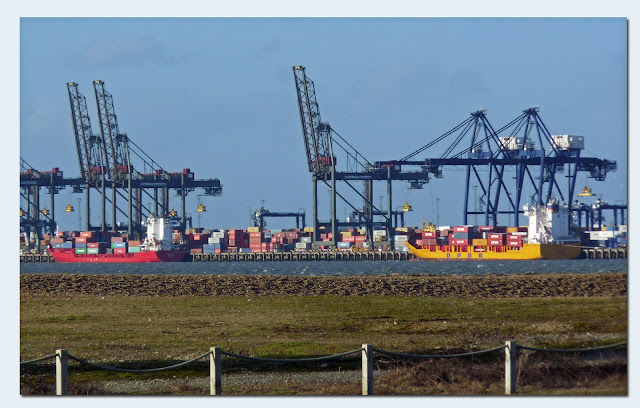 Cut ... to Felixstowe, and the container port, where we hoped to see some birds in the vicinity of the Bird Observatory at Landguard Fort. It was bitterly cold on Sunday afternoon, and there were few birds to be seen. 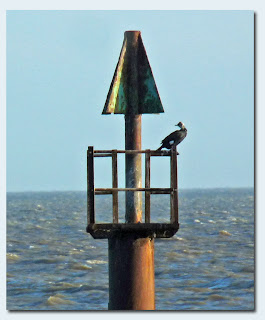 We found a short boardwalk, which led us towards this Cormorant. It was too breezy to hold the camera still, but it seems to me that the bird has an unusually white head. The link here (you will need to click and then possibly scroll down a little) is not about Cormorants in Suffolk, but it explains about some of the white markings that can be seen on the heads of these birds. 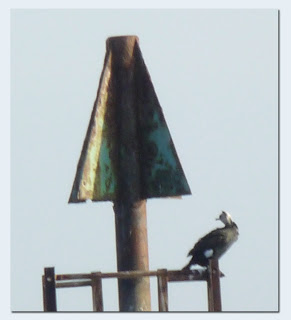 There were one or two Herring Gulls around on the shingle, among the Pigeons. 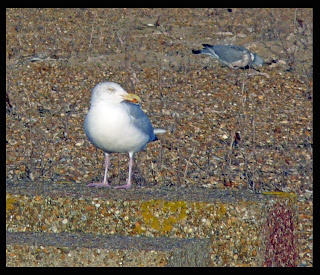 And finally (for now), this was a photo I took at Flatford on Saturday of the Barn Owl as it coursed the field in the fading light. 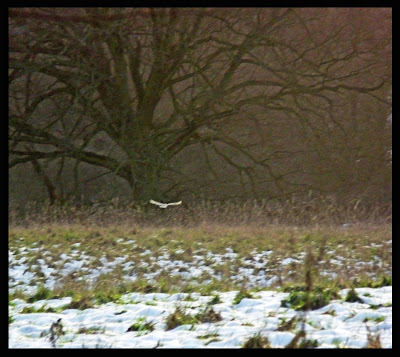 We have occasionally heard owls back home, but to date, this one below is the only one we have actually seen! Its eye sockets contain small solar panels, which shed tiny beams of light on our garden after dark. 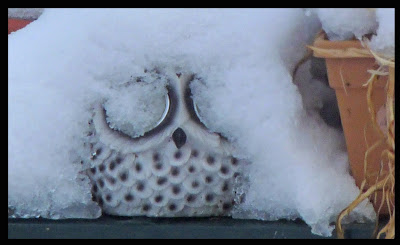 
I wonder whether those of you who live in the UK have undertaken your 2013 RSPB Big Garden Birdwatch yet. The survey, which lasts an hour, can be undertaken at any time over this weekend.

I sat down by the window in our home this morning, and was pleased that despite the snow, most of the usual suspects showed up. Sadly there was no sign of the Blackbird or Wren, although I have subsequently seen the Blackbird. I also saw a single Starling, but since it flew on through without landing, it could not be counted. We have not yet been in this house for a year, so it was a particularly interesting survey for me.

We actually saw quite a few more birds than is indicated by the results sheet below. For this survey, you can, of course. log every bird you see if you choose to do so; but for RSPB purposes, you only submit the largest sighting at one time of a given species. This means that although I saw six Blue tits (well, two then two, then one, then one), I can only log one of the two-bird sightings (i.e. just the first pair and not the second - and not the single Blue tits), in case the other birds were actually not different ones at all.

My list below is what was submitted to the RSPB. 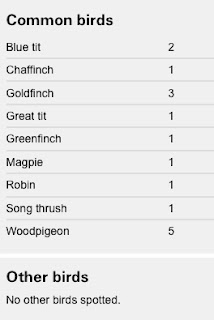 We spent the afternoon enjoying the area around Flatford Mill, the scene of many of iconic landscape paintings by John Constable. The RSPB has a small wildlife garden there (photo at end end of this earlier post here), the the folk in charge had set up telescopes and binoculars for the day of the Birdwatch. There was still a fair bit of ice around, but it was wonderful to see our first Snowdrop of 2013. 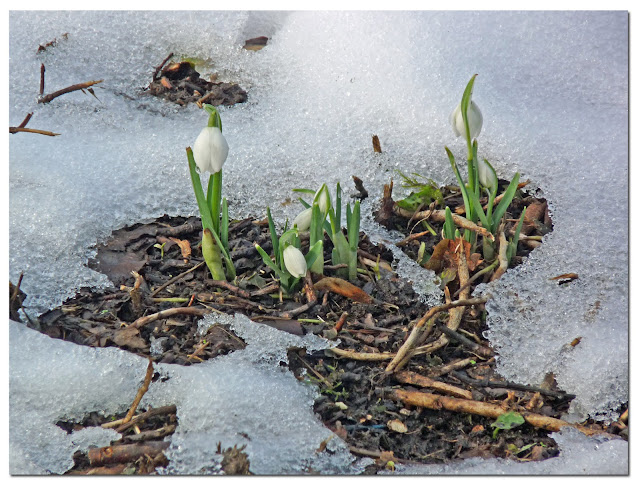 I shall probably do a separate post about our Flatford walk, since the snow scenes were so idyllic ... but I thought I would end this post with the bird we saw on our drive out of the village on our way home. It is, of course, a Barn Owl. My photos are just record shots as we were in the car at the time, and at some distance from the bird. However, we were able to stop safely and I managed to click the camera a couple of times. 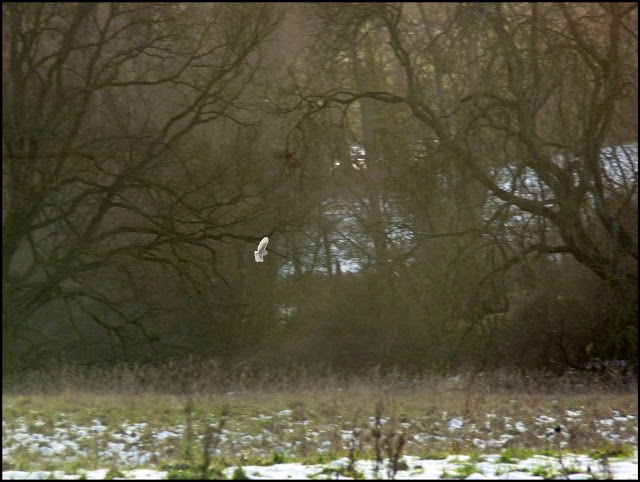 Shortly after we arrived home, I noticed the moon over the snow ... 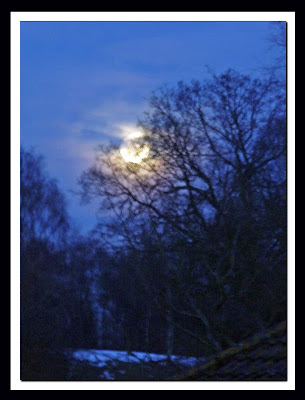 
I have also seen gulls and pigeons overhead, and a blackbird in the distance. I am wondering whether the Blue tits are the most regular visitors at present because ...

[a] they are the about the smallest birds around and need to re-fuel more frequently.

[b] they are the ones who like the seeded fatballs on offer.

[c] they tend to come in pairs or small groups and feel there is some safety in numbers.

[d] my home patch is considered their home patch!

All the above photos were taken through double-glazing, so my apologies if they are not as sharp as we would like them to be!

Enjoy the birds in your home patch - and I'll end with a seasonal reminder from the RSPB . . .
Posted by Caroline Gill at 12:15 4 comments:


I have watched a few coronas in Western Scotland, in places where there are frequent rainbows; but have not often seen these iridescent clouds in England. I suspect the cold temperatures were partly responsible and perhaps the quality of winter light by the sea. You might be interested in this site called 'Atmospheric Optics'.

My January Bird list for 2013 is a great improvement on last year's equivalent (though I spent part of the month of January 2012 in Philadelphia and New York and the rest in urban Ipswich).

Other wildlife seen in 2013