WARNING: these fungi may be poisonous or dangerous for humans. 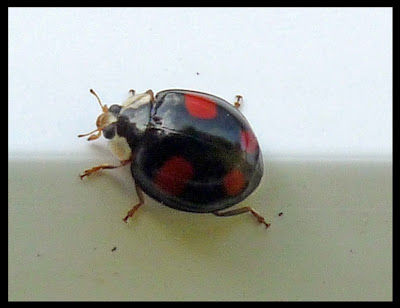 This is the first Harlequin Ladybird (or Ladybird of any kind for that matter) for weeks, possibly since 9 August. I wonder if I have been missing them or whether there have been very few around. This one was walking along the frame of our French window yesterday.

As usual, I have logged it on the Harlequin Ladybird Survey site. I think it is Harmonia axyridis spectabilis.
Posted by Caroline Gill at 22:47 2 comments:


Common Darters, apparently, can be seen as late as December ... so there may still be more to see. We watched a few Emperor Dragonflies at Flatford Mill last weekend, but they were far too quick for the camera!
Posted by Caroline Gill at 10:35 4 comments:


Back in mid August 2012, we made our first visit to RSPB Titchwell Marsh on the North Norfolk coast. It is a splendid reserve, with good paths and hides. I had very much hoped to see a Spoonbill - a first for me - and we were not disappointed as there in among the geese, Avocets, Little Egrets and other wading birds were nine Spoonbills. What magnificent creatures they are! There is a newly established breeding colony a short way along the coast.

You can see a photo of 19 Spoonbills on the Titchwell lagoons here. You can read about the travels of a ringed Spoonbill here and here. 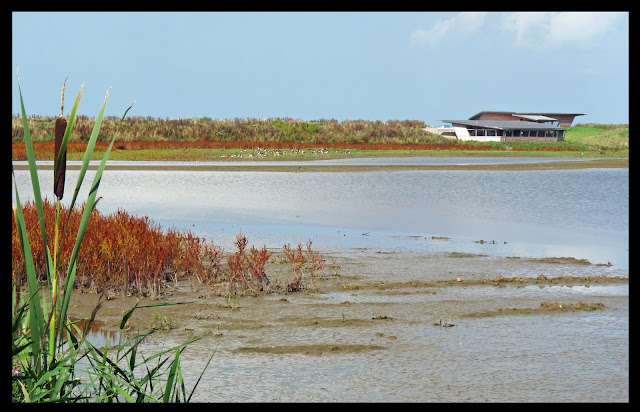 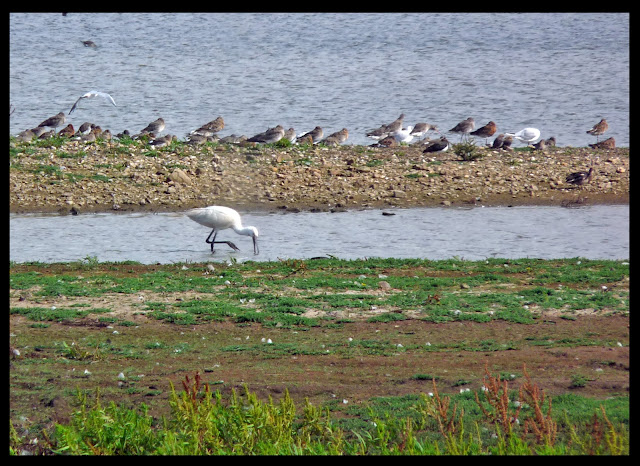 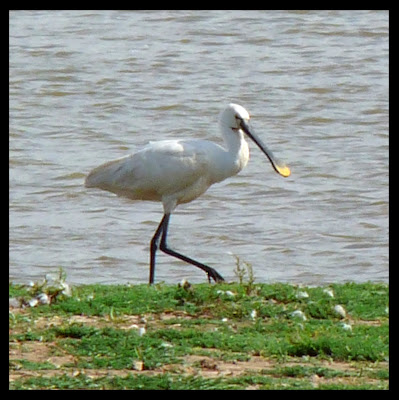 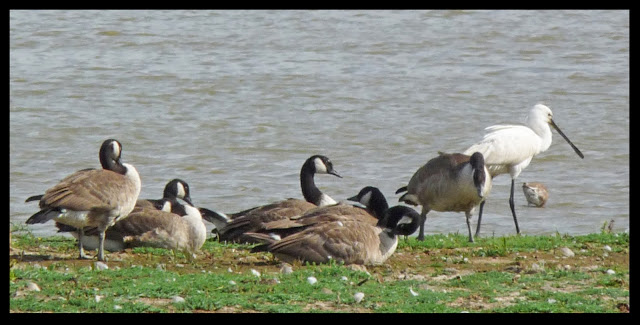 I have been meaning to post these pictures for a while! It is always a thrill to encounter a 'new' species for the first time!
Posted by Caroline Gill at 12:27 2 comments:


On our way back from Oxburgh Hall last Saturday, we took a detour around Thetford to enable us to visit the remains of Weeting Castle. We parked by the church (what a gem - photo below!) and there behind us was a hedgerow bejewelled with Bryony berries.

Black Bryony [Tamus communis] is more abundant in the south of Britain than in other regions. Itlacks tendrils, but climbs in a clockwise direction unlike White Bryony. I wish I had taken a photo of the leaves as these help with identification. White Bryony has tendrils and belongs to the marrow family: Black Bryony is related to the yam. I understand that frugivorous (fruit-eating) birds will be attracted to these berries in the latter part of the year ... but they are very poisonous for humans.
Posted by Caroline Gill at 15:22 4 comments: 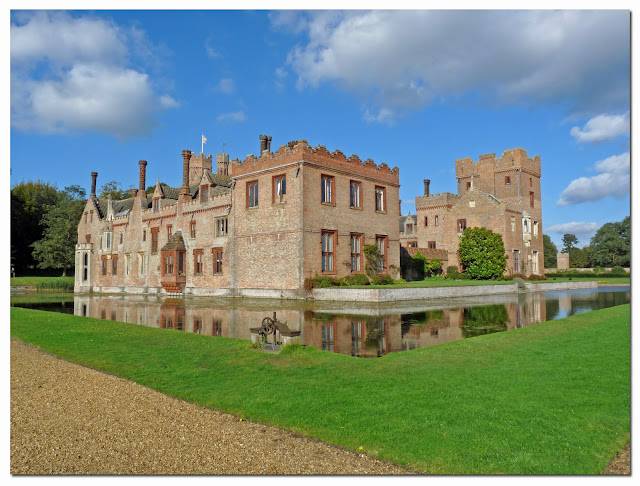 We spent a few hours at Oxburgh Hall in Norfolk on Saturday, a magnificent moated building with a priest's hole and other fascinating features. The Hall, built in 1482, is probably best known these days for the 'Oxburgh Hangings', embroidered by Mary Stuart and Bess of Hardwick.

I first encountered these hangings or 'tapestries' when I was a child, and they have intrigued and delighted me ever since. Mary and Bess copied many of the wonderful creatures from sources like Konrad Gesner's Icones avium omnium, published in Zurich in 1560. Many of the hangings are now in the V&A, but Oxburgh has a magnificent selection.

I enjoyed seeing the panels of the dolphin and the unicorn, but the mole particularly caught my eye. He was described by the needlewomen as 'mold[e] warp' (I can't remember whether there was an 'e' after the 'd'), a term I knew from Alison Uttley. I had not realised that this synonym for 'mole' goes back to Middle English, with a parallel in early Saxon language as 'moldwerp', meaning 'earth-thrower'. Since the true mole was not found in Palestine, the references to the 'mole' in Leviticus, among the list of unclean animals, may in fact signify a similar creature, perhaps the mole-rat or the weasel. Henry IV is referred to as the 'moldwarp' in Shakespeare's King Henry IV, Part I.

It is not difficult to imagine Mary entertaining herself during her days of imprisonment in some of the stronghold houses of England by sewing these 'wild and wonderful' creatures and plants.

You can see pictures by following these links ...
The season is changing fast, but I spotted a couple of dragonflies (?rather old Common Darters), making the most of a spot of sunshine near the blackberry bushes. 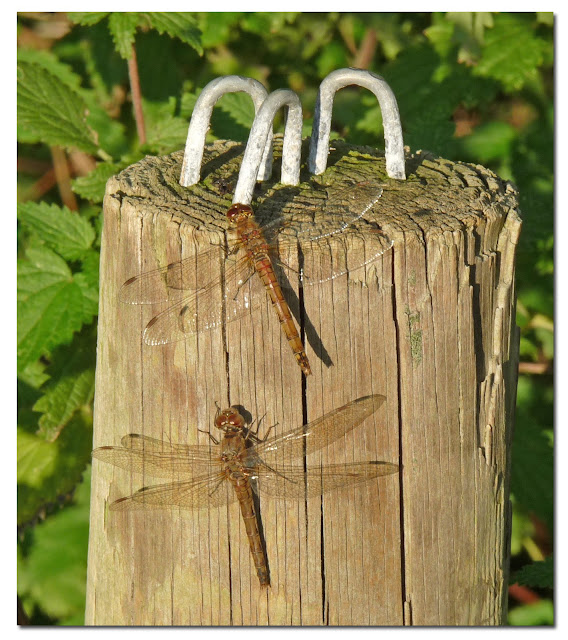 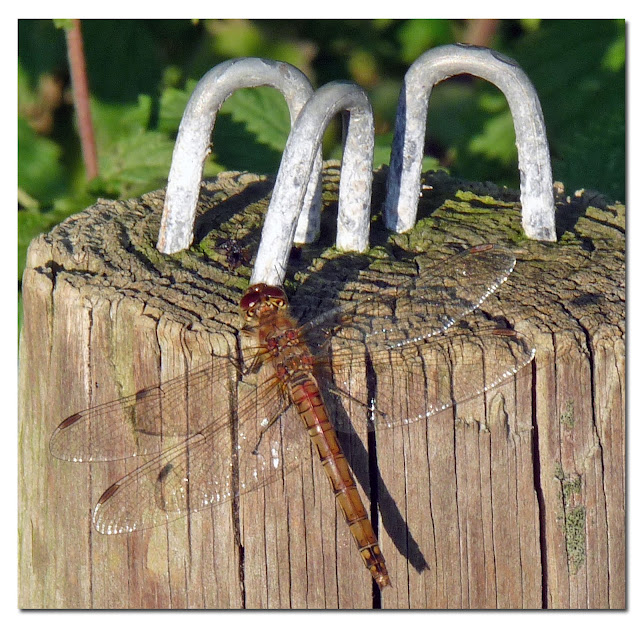 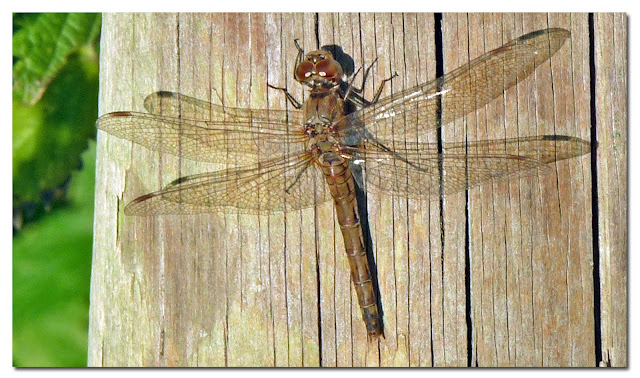 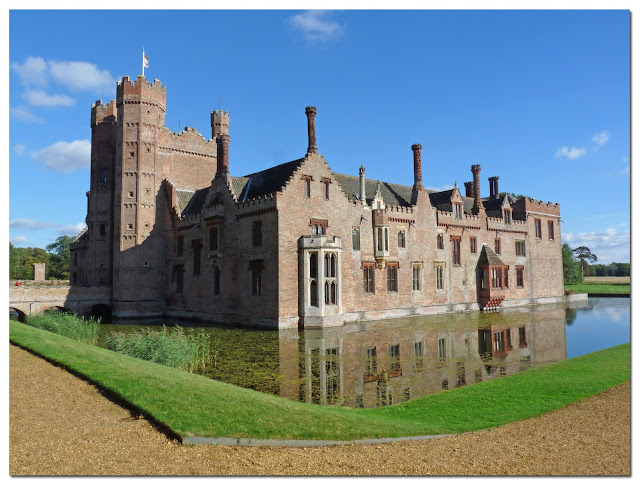