The Tree Year (4): A New Visitor to the Larch

The two were preparing to mate, with much flapping of wings in a kind of air dance. They were too quick for us to catch on camera, but it was a joy to behold.
Posted by Caroline Gill at 22:42 3 comments:

I came face to face with this tiger-like apparition, deep in the woods, along the boardwalk at Dinefwr on Monday afternoon. How amazing to have stripes going in two directions!

Henry Walloon ('Life on an Oxfordshire Lawn') has an informative post about insect mimicry, including those wasp-like stripes - here.

Posted by Caroline Gill at 01:07 No comments:


When I was in junior school in Kent in the 1960s, we had an ongoing wild flower count one summer term. Each pupil had to find as many species of wild flowers as possible. We recorded our finds after every weekend, and attempted to learn the names of ten new species for a test each Friday.

During the course of the term, I noted a total of 144 species, including a few garden escapes. Perhaps inevitably, we picked one or two Daisies and Buttercups along the way, but we soon learned that some plants were rare, and that e.g. the sight alone of an Orchid was more than sufficient for our purposes.

I thought it would be interesting to note the wild flowers I see this year. I used The Concise British Flora in Colour by W.Keble Martin when I was at school. Once again, I will be happy to include any plant featured in that book.

The list to date is as follows (and - just to underline this - I have no intention of picking these flowers!) ... I shall add flower names as I come across new species. I don't intend to post a photo of every 'find', but I will add the occasional picture, and I plan to include livelinks when there is a photo available.

Odonata (2): Damselflies - and other creatures - at Dinefwr 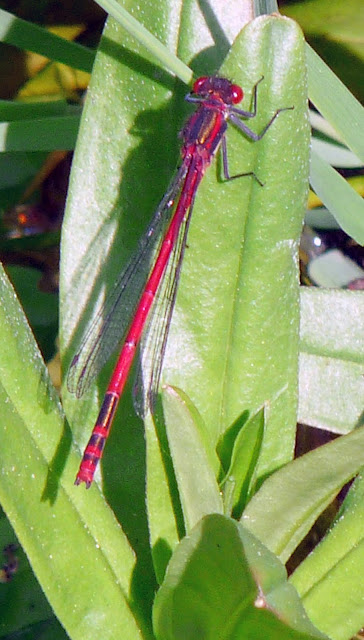 Caroline: I just realised you have a query on your Common Blue Damsel. It looks like Azure Damsel to me (the first black mark on the abdomen is shaped like an underlined U. In Common Blue, it's an oval on a stalk.) There were very few Dragonflies flying about, but we saw a couple flit through the trees.

I also saw the following creature, presumably depositing eggs as it she flew up and down numerous times within a small radius of weed. I would be glad to have an ID! 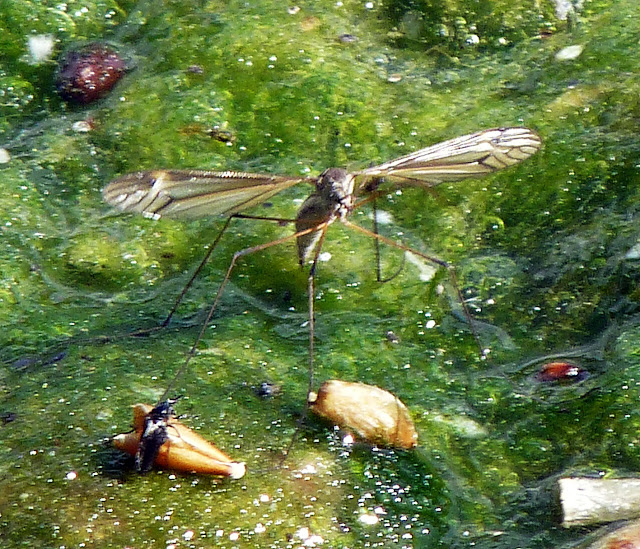 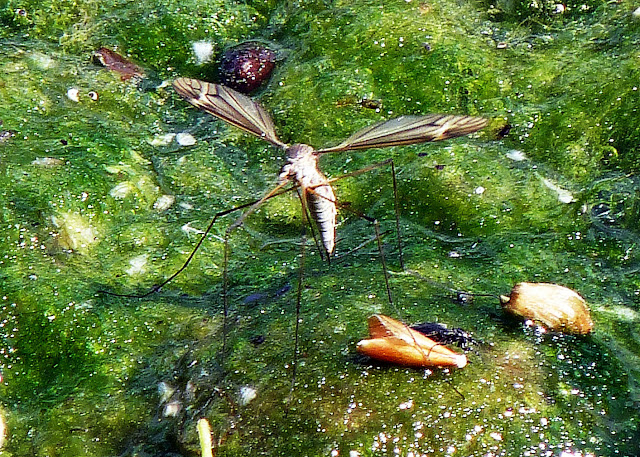 I assume the following is a nymph of some kind, but I don't know whether it is a Damselfly or some other creature ... 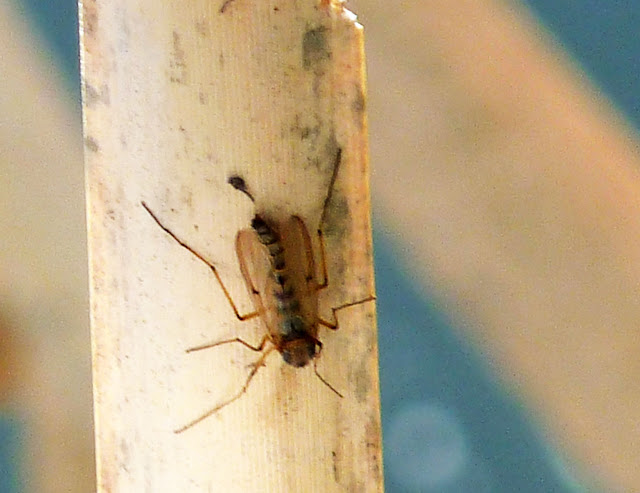 We also saw a few Orange Tip butterflies and a Red Admiral. A flash of crimson caught my attention as a Burnet Moth fluttered by the waterside. It was enjoying the warm sunshine, and was too quick for my camera!

I have got rather behind with Ladybird postings for 2011.

I think the one above has 18 spots. In some respects it resembles the Harlequin ladybird, f. succinea (or Harlequin ladybird Harmonia axyridis var. succinea), but I think it was rather small and the spots do not quite correspond.


The next Ladybird we noticed (6 April 2011) was Queen of Scarborough Castle ...

The following Ladybird was seen at Mount Grace Priory in Yorkshire, UK, on 7 April 2011:

Ladybird pages (do record your findings ...) 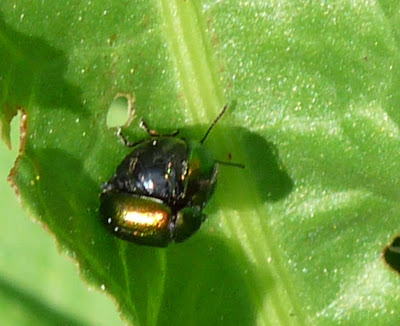 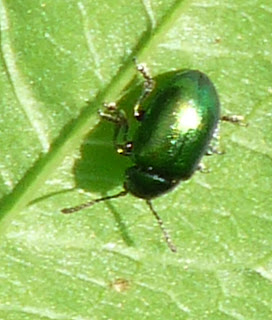 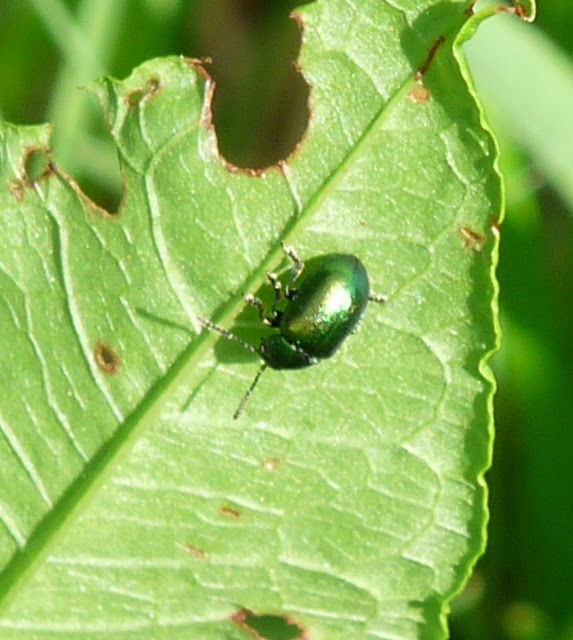 I am not entirely sure whether the top two photos show Dock Leaf Beetles (Gastrophysa viridula). I think they do, but thanks to Stuart's photo and commentary here, I feel relatively certain about the ID of the Beetle in photos 3 and 4.

You can read more about these beetles in the Cabinet of Curiosities blog belonging to Phil Gates, a Guardian Country Diarist ... here.
Posted by Caroline Gill at 19:30 1 comment:

I took a stroll around WWT Llanelli in the late afternoon sunshine, and was delighted to watch my first Dragon- and Damsel-flies of the season, which I have posted below. I am finding blue Damselflies particularly hard to identify!

Incidentally, my last 2010 sightings are here.
You might also enjoy these previous posts:

P.S. My thanks to Neil - see his comment below and help with identification. I can now see those hairs!* You can check out the ID here.
Posted by Caroline Gill at 21:37 2 comments:

Beautiful Birds (23): it's those Puffins again!

Those of you who are familiar with my previous posts (e.g. here) will know by now that I love Puffins!


We have just returned from the RSPB Reserve at Bempton Cliffs off the Yorkshire coast in the north of England, where these small clowns of the air were beginning to parachute in. We saw the odd Puffin here and there, but my hope is that these birds will actually be returning two by two by two by two by two ... from the ocean to their favoured nesting sites. It would be encouraging to feel that Bempton was supporting a healthy clutch of Pufflings this season.

Gannets were already laying eggs in their precarious precipice nests, but on our first visit, we only saw one Puffin, and that was at some distance. However, later in the week once the temperatures had soared, we managed to spot a few more; though for the most part, we had to shoot our photos straight into the sun. Some Puffins were very hard to find: the photo below was taken from one cliff face to another, requiring my maximum zoom.


Other Puffins were not so camera-shy, and were busying themselves in closer holes and on nearby cliff ledges.

Unlike our observations on previous visits, we failed to see any pairing Puffins, but there was definitely some serious spring-cleaning going on in the rocky burrows.