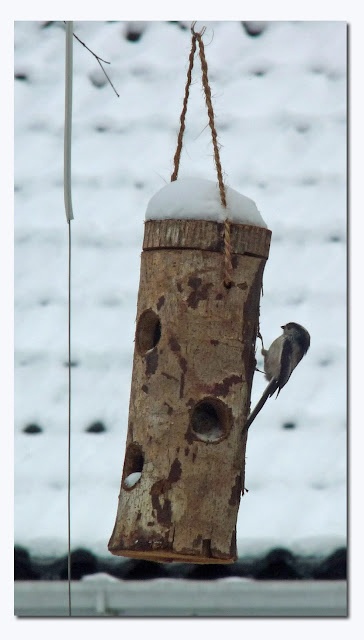 The snowy weather continues to fight for its grip on the landscape. Despite moments of sunshine, there is still a bitter chill in the air. The small birds have been busy at the feeders. You can see a Long-tailed tit above. 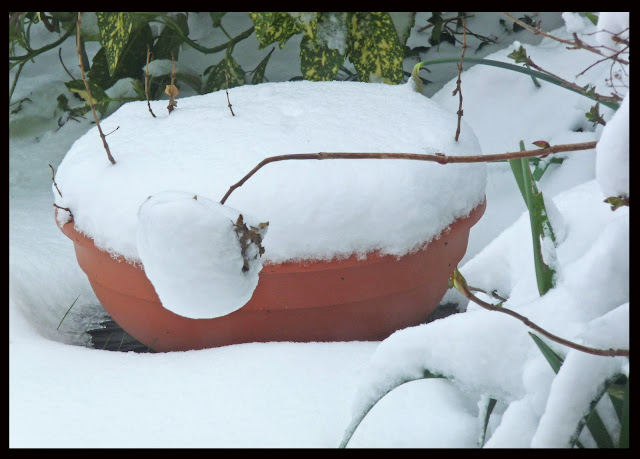 We were at the Camden Roundhouse in London at the weekend, and came back to find a white world in Suffolk. 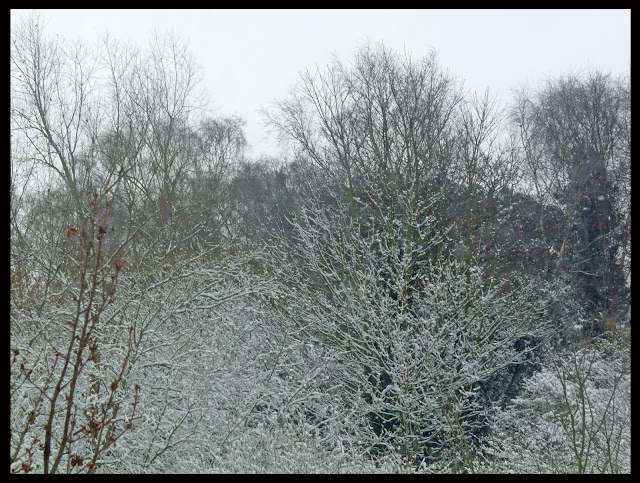 I took this view of the trees over the weekend. There is still a little snow on the boughs and on the hillside beyond (yes, we do have hills in Suffolk!), but the scene is looking less like a winter wonderland. 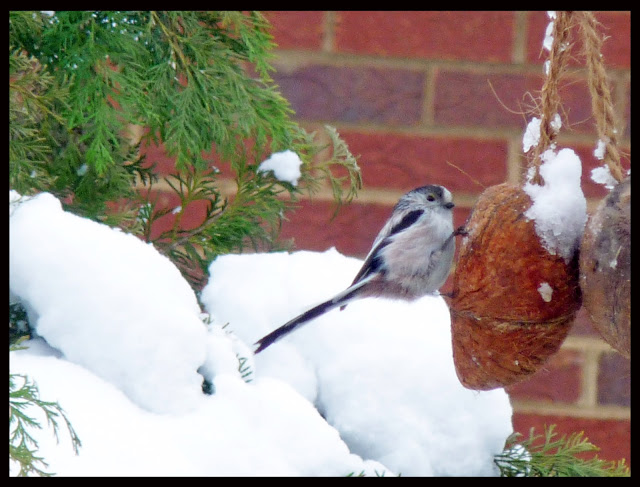 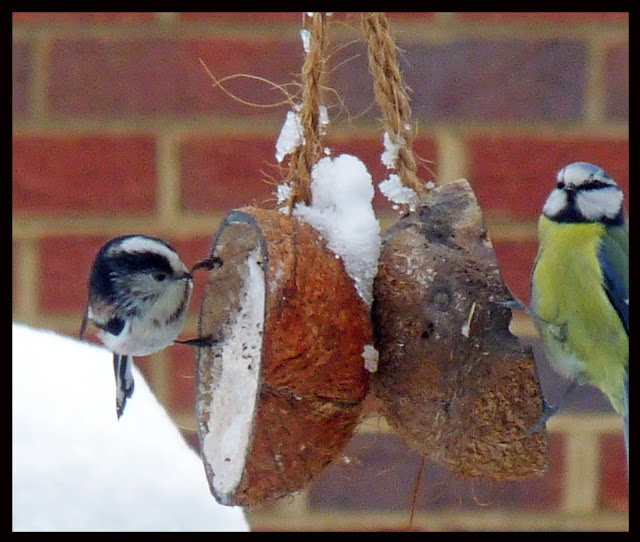 Blue tits, Great tits and Long-tailed tits feed happily together most of the time. Great tits and Robins do not like to share the feeder, though Robins are prepared to eat alongside the smaller Blue tits, as you will see in the bottom photo. 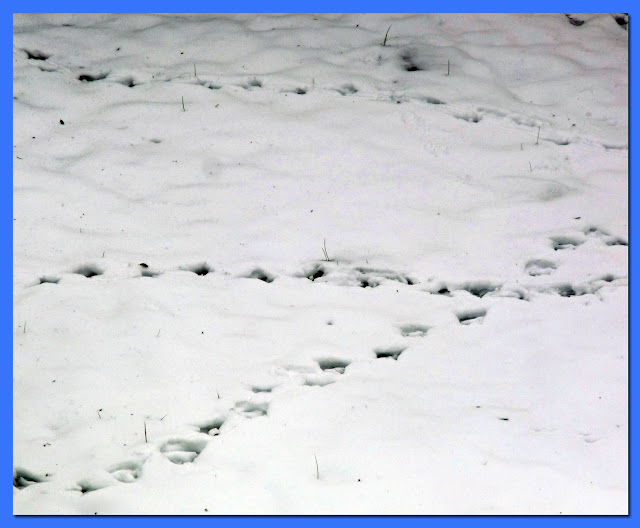 I don't know who has been making tracks across the lawn, but this scene above was waiting for us this morning. You can see that the snow is past its best, and since I took the photo, there has been a further thaw.

The Robin has been a frequent visitor. You can see him below, trying to fool me into thinking that it's Christmas and not Easter just around the corner! 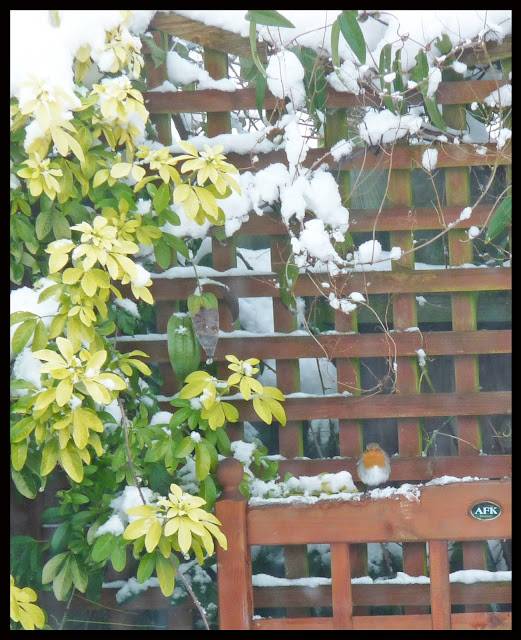 I wonder whether you feel protective towards your small birds? I love the concept of 'wild', but find I have to brace myself when it comes to Tennyson's phrase, 'Nature red in tooth and claw'.

I looked up Tennyson's poem, In Memoriam A. H. H., 1850 (Canto 56) ... and only then remembered with a shudder that 'Nature' in this particular poem is not the personification of a wild creature in our landscape such as the Sparrowhawk: no, it actually refers to us as a race of human beings.

So what set me thinking? Well, two things, triggered by the arrival of the Sparrowhawk in my home patch. The first was a post on fellow poet, Juliet Wilson's Crafty Green Poet blog, about her sighting of a fox and a drove of rabbits in the snow (I was willing the fox to feed, but not on the rabbits!). The second was a memory of my time in Philadelphia a year ago last January, when I discovered that there was a version of The Peaceable Kingdom by Edward Hicks (1780 - 1849) in the Philadelphia Museum of Art. Hicks, apparently, painted 61 versions of the scene, so don't be surprised if this is not the version you know!


You can read my previous post about hybridisation here. 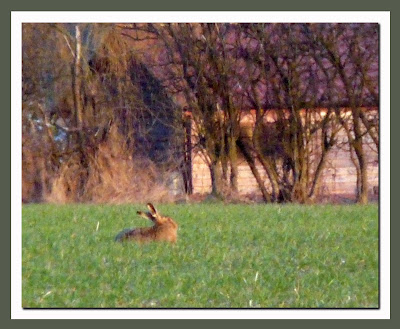 I can testify to the fact that our Mad March Hares are out and about. We were driving home through the Suffolk countryside in the Sudbury area when we alighted on a couple of hares. By the time we had found somewhere safe to park, I was only able to take a quick couple of record snaps. This is the better of the two!

We have only seen hares once before since our arrival in East Anglia, and that was last year at WWT Welney in the Fens. However, I hope to see many more sightings of these iconic creatures, with their black-tipped ears and strong hind legs. Unlike rabbits, hares do not have burrows. They live above ground.

We saw some beautiful rabbits recently (like the one below), and, although you cannot tell from these photos, the rabbits seem very small in comparison with their larger Leporidae cousins. 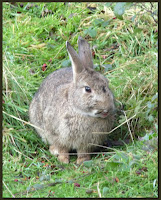