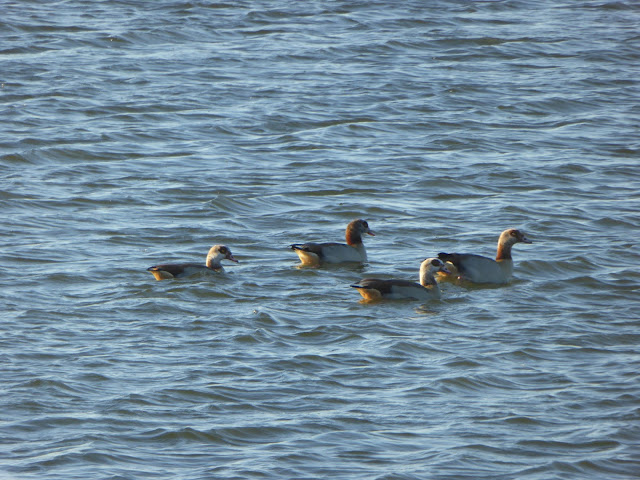 It felt as though the temperature was several degrees centigrade below freezing: there was an unforgiving wind from Siberia.

However, we wrapped up warm and ventured out for a short time to enjoy the sunshine at Alton Water Park and Anglian Water reservoir on the Shotley Peninsula near Ipswich. There were several pairs of Egyptian Geese (photo above): we find we are seeing more and more of these. 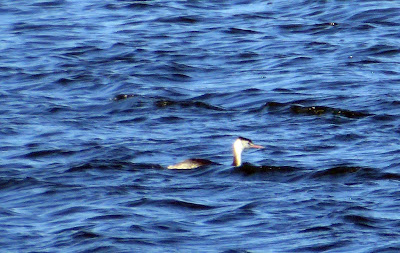 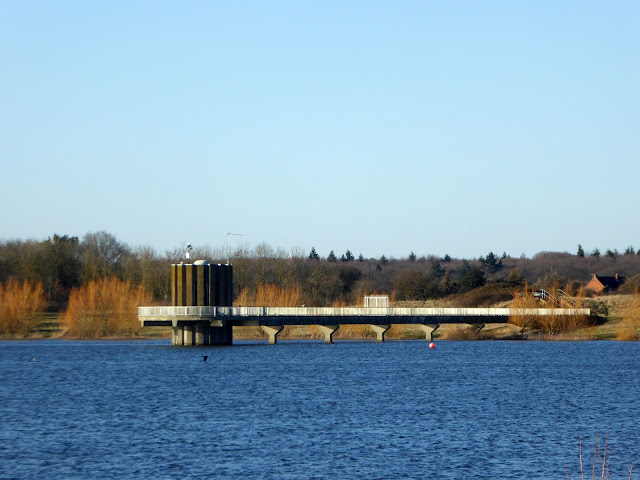 The sunlight was remarkably bright and there wasn't a cloud to be seen. 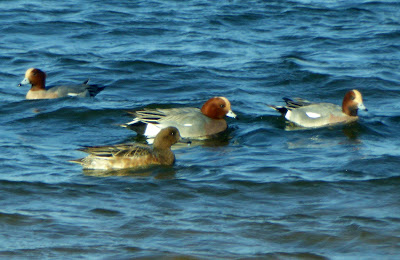 These are some of the Wigeon who were floating near the shore. 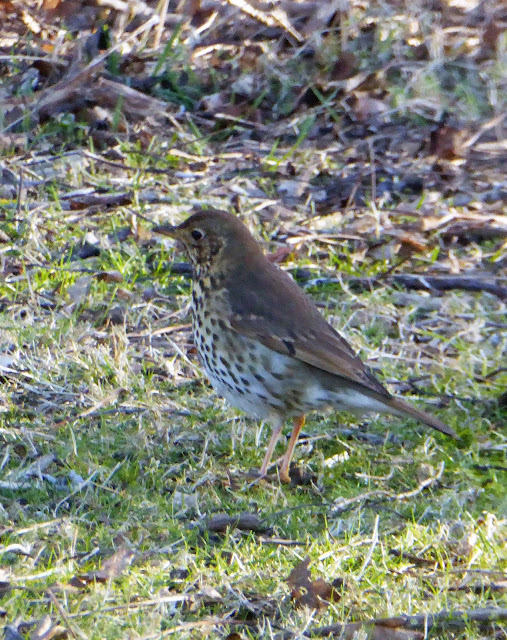 We checked the tree that usually has good bird feeders, but there was only one feeder today with a few nuts in the bottom. However, as we drove out of this part of the car park, we came across a lovely Song Thrush (thank you, Juliet, for your help here: I often have difficulty telling Song and Mistle Thrushes apart!). 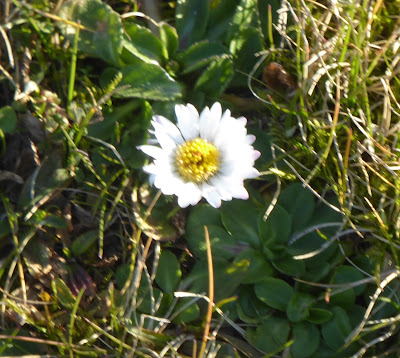 On such a bitter day, it was good to see some early Daisies, and to remember that spring cannot be too far away - despite the forecast! 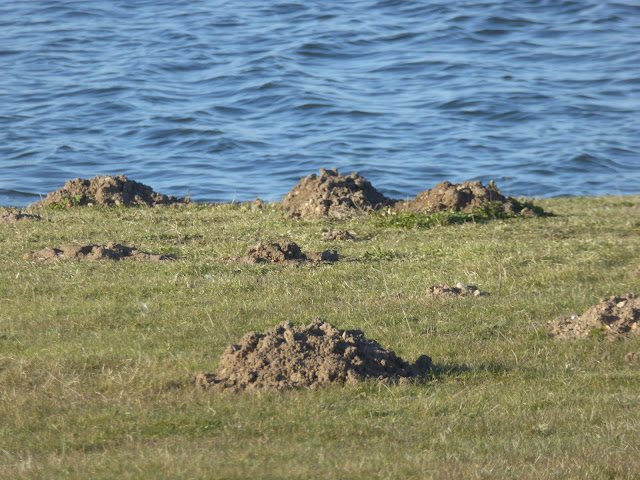 I was surprised to find molehills so close to the water's edge,
but perhaps the damp soil makes digging a bit easier... 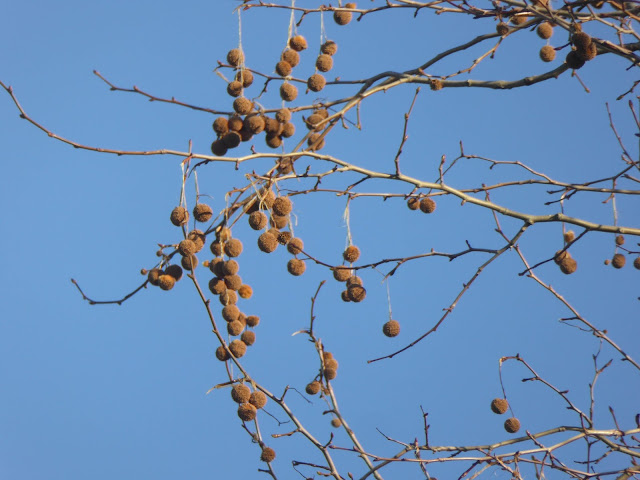 In the course of some poetry research last week, I learned that these are not seed cases,
but rather the globose heads that bear the fruit of the Plane Tree. 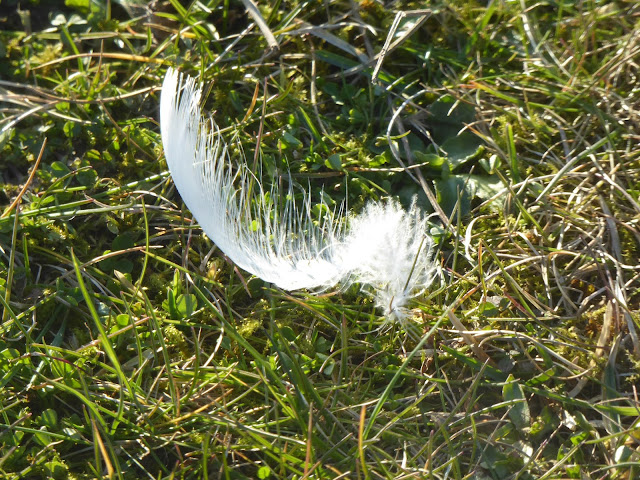 An exquisite downy feather.
If I was a duck, I would hang on to feathers like these until the temperatures rise! 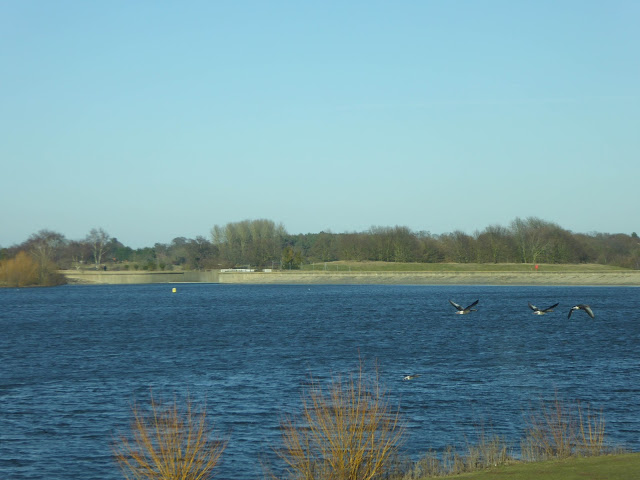 The Egyptian Geese took off... 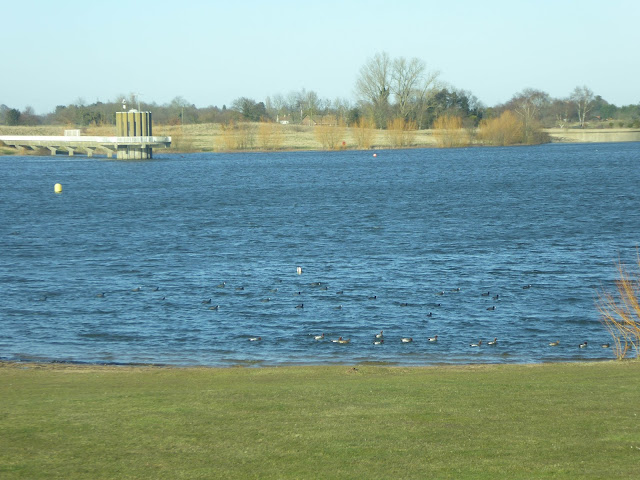 ...but the Wigeon and Coots stayed in their rafts near the shore. 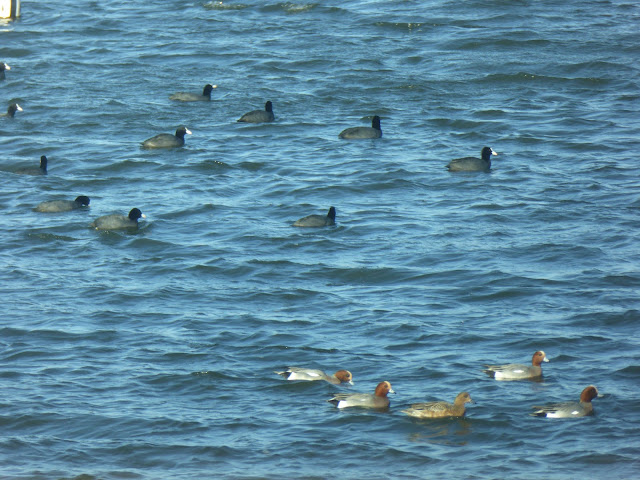 We walked a little way along the reservoir wall (below), but soon retreated for a more sheltered spot. 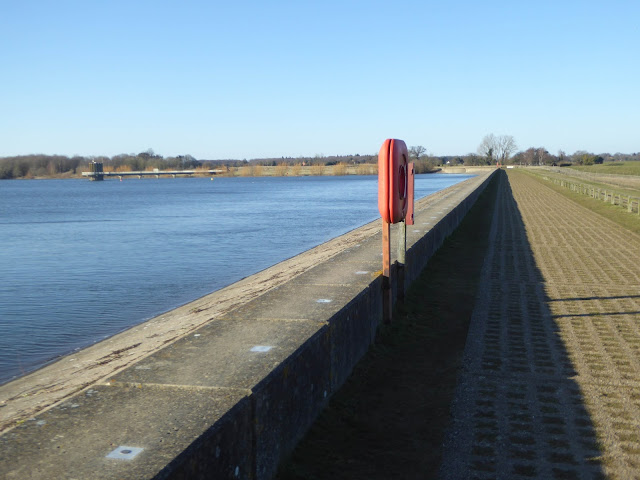 Here is David before we turned for home... 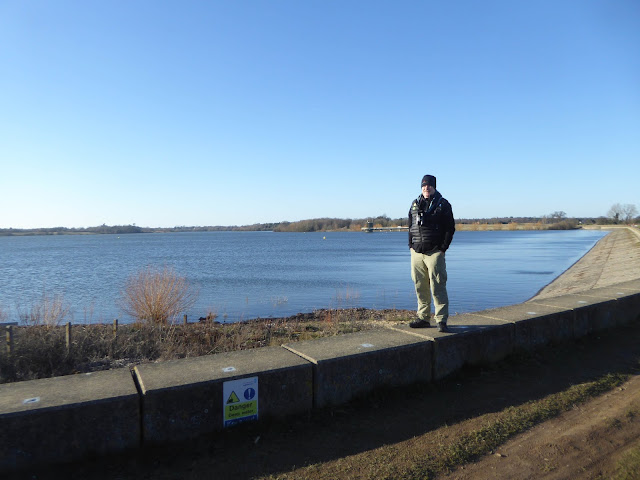 There was a small flock of birds in a tree by the car: they were in shadow and it was hard to photograph them, let alone see what they were. They seemed too rounded for Sparrows and were not the right shape for Chaffinches. David and I separately came to the conclusion that they might be Redpoll. I have lightened my photo considerably since it was almost a silhouette. Do let me know what you think... 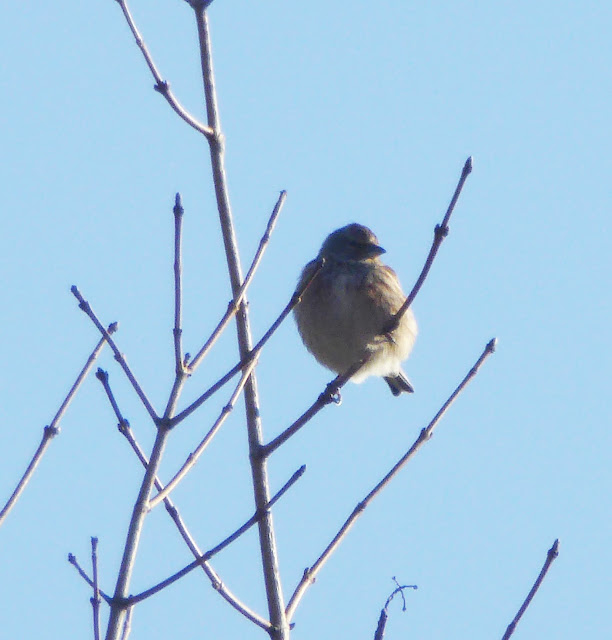 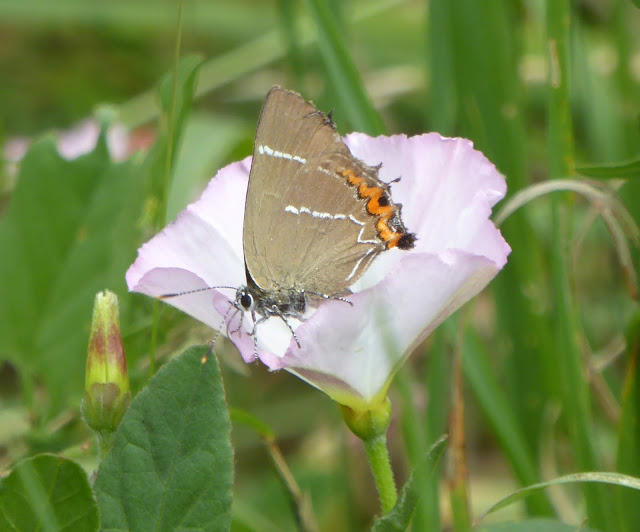 Those of you who follow my blog may recall my excitement at seeing my first White-letter Hairstreak surprisingly close to my Suffolk home last summer. These are the photos I took at the time. I am posting them again in the light of the good news that three White-letter Hairstreak eggs were recently discovered in Scotland where this species had not been known to breed for over a century. You can read the story on the Discover Wildlife site here.

And as for me, well, I shall return to my spot later this year when these pink Bindweed flowers are blooming. White-letter Hairstreaks usually frequent the treetops in areas of elm, but, of course, so many elms have been decimated by disease in recent decades. 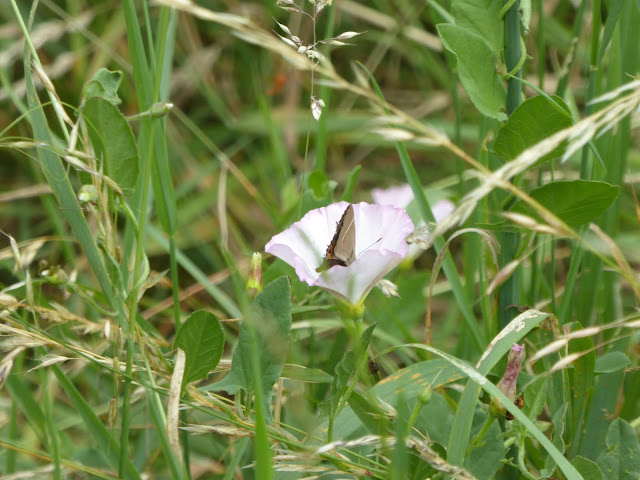 Postscript: I have just ordered a copy of a children's novel, highly recommended by an adult poetry friend. It is called The Island at the End of Everything by Kiran Millwood Hargrave and is about butterflies and leprosy. I will report back in due course...
Posted by Caroline Gill at 21:46 3 comments:

Urban Birds (and Mammals) in a Local Park 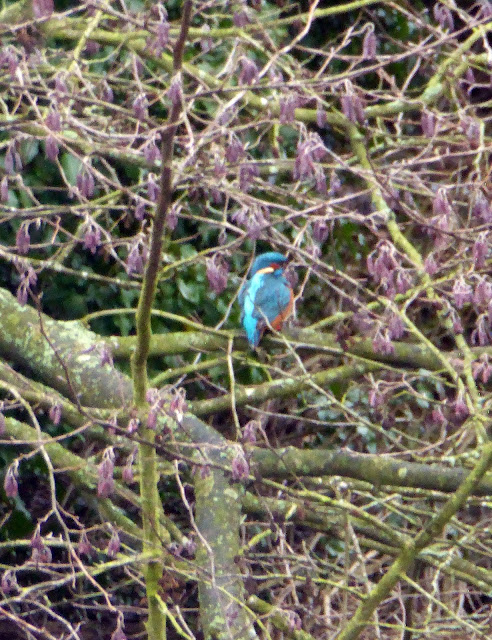 Inspired by the launch of Nadia Kingsley's new book of art and poetry, DIVERSIFLY, on the theme of urban birds in Britain, we took a short spin around a local park to see what was about before the rain got too heavy.

Having seen the Kingfishers (here and here) on BBC Winterwatch recently, we were thrilled to find not one but two by the lake, presumably a male and a female. Will there be young in due course?

Sadly the birds were at the furthest point from us for much of the time, and since my zoom does not perform well in grey rainy weather, my photo is just a record shot - but it is always a thrill to see these birds, and I have never seen two at the same time before. 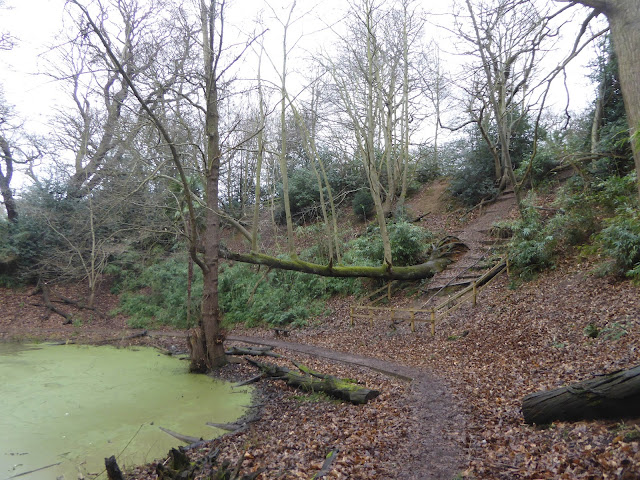 We were fascinated to see the small trunks growing vertically out of the horizontal trunk. This was where we saw our first rat. David also noticed a Grey Squirrel. 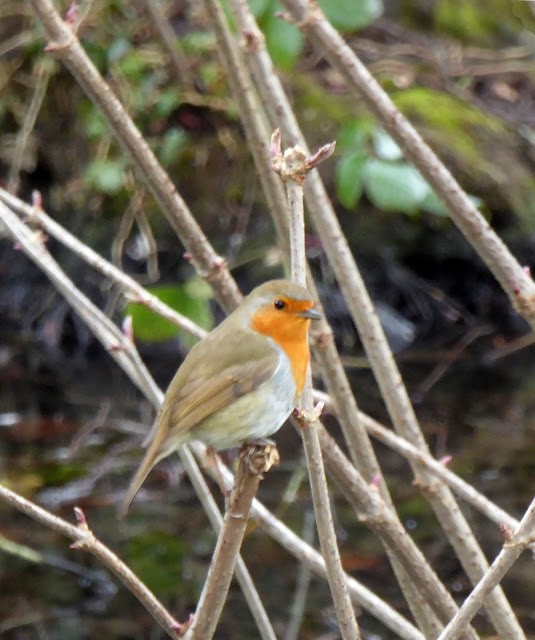 It's always lovely to see a Robin. 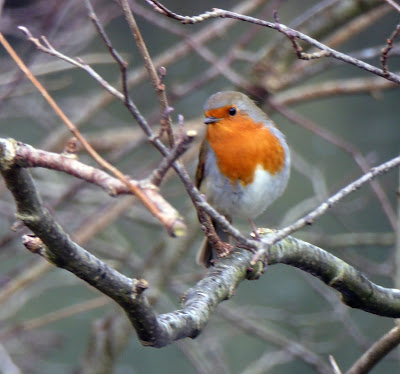 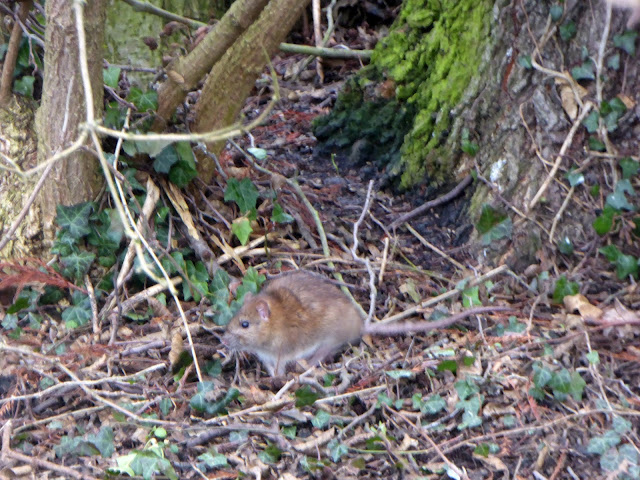 I don't know if our presence startled the rats, but the larger one, presumably the mother, swam off across the lake. The young one (peeping out of the trunk, two photos up) came down and sniffed around the tree trunk.

We also noticed Wood Pigeons, a Carrion Crow, a Bluetit and a Magpie. Not bad for a short visit in the rain... 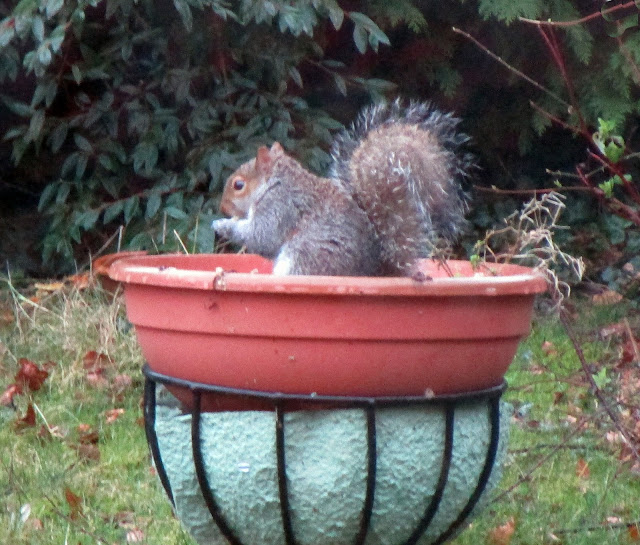 This furry creature arrived after the RSPB Big Garden Birdwatch, and evidently found something tasty in the planter. Since the mammal section of the survey requires sightings to have been during the last year rather than during the hour of the watch, I guess the squirrel's lateness is of no real significance!
Posted by Caroline Gill at 09:20 1 comment: