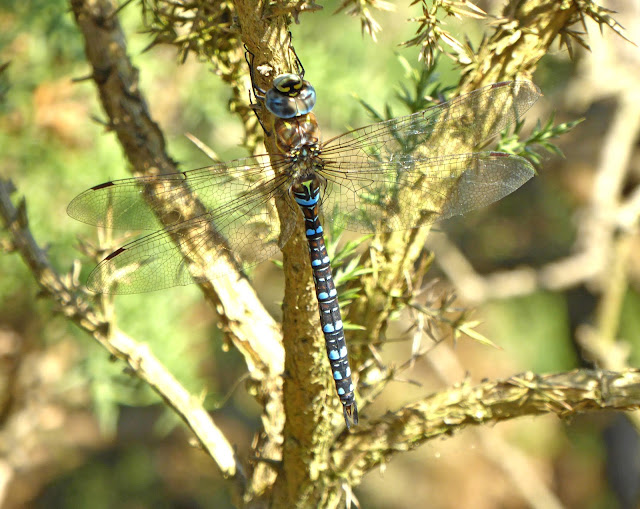 Butterfly numbers are said to be down, but it seems to me that this has not been a brilliant summer for Dragonflies or Damselflies either. We were delighted to see our first Southern Hawker on Dunwich Heath last week.

The close-up below shows the characteristic yellow triangle at S2. 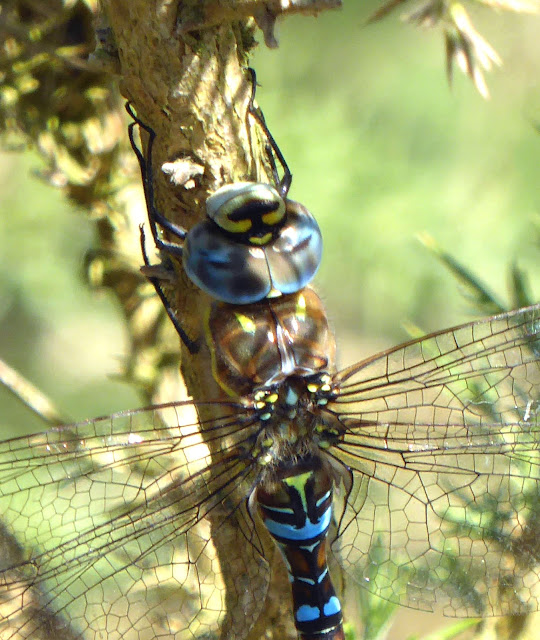 Posted by Caroline Gill at 23:00 No comments:

A Walled Garden of Wildflowers at NT Ickworth


NT Ickworth, here in Suffolk, has a walled garden, currently boasting a superb display of Dahlias around the edge. However, it is the huge expanse in the centre that catches the eye for it has largely been given over to a mass planting (by Urban Forestry) of wildflower seeds. These were sown in April.

This post comprises a scattering of the photos I took when I was there last weekend. The wildflower petals were beginning to fade and seedheads were becoming prominent. There was still plenty of pollen about for the insects ...

The seed mix, which has apparently been on sale at Ickworth, includes Cornflower (a particular favourite of mine), Poppy, Borage (a hit with the bees), Golden Tickseed, Red Flax, Corn Marigold and other species.

My understanding is that the 2015 and 2016 seasons of wild flowers will give way to other kinds of planting once the flowers have helped to prepare the soil. But for now it is a walled paradise, and in a summer that has not seen many insects, a veritable haven for bees and hoverflies.


The Royal Horticultural Society offers advice on its website - here - for those who may be considering a wildflower meadow (or patch) of their own. The RSPB site also has suggestions.

My homepatch is a suburban garden so it will not be sowing a meadow, but I plan to plant a wildflower seed mix next spring in our 'wild corner' of grass and nettles, in the hope that it may add colour and help to give wildlife a home.

(What seems to be a) Red Underwing Moth at NT Oxburgh Hall, Norfolk


We were having a picnic lunch last Saturday by the church wall in the Oxburgh Hall car park when we noticed this fine but camouflaged creature. It was large and although it remained pretty still, we observed some small movements.

I looked and looked at moth pictures on my return home without much success. Eventually my eyes alighted on a photograph of a Red Underwing, and I felt fairly confident that this was the species in question.

Sadly we never saw even the tiniest flash of red which is there to warn predators, but the outer markings alone seem to make this a likely ID when considered alongside the identification offered on the iSpot site.

Just look at those stripes on the legs! But what a shame we failed to see a parting of the wings. 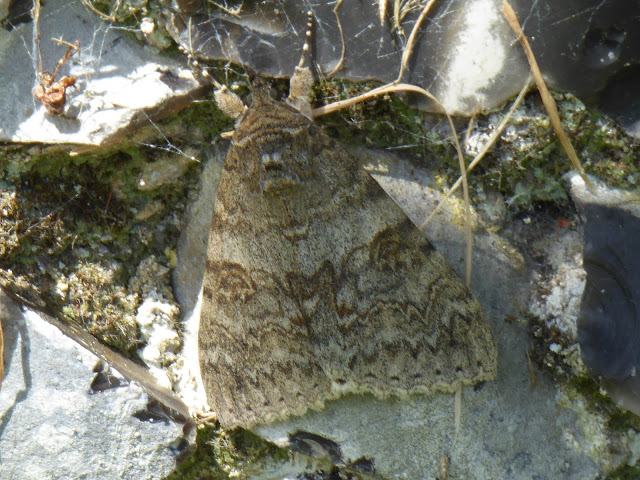 Apparently this species frequently rests on walls. It is just one of the 300 varieties of Noctuid Moths, the largest family of macro-moths here in Great Britain. We noticed the moth near the trees in the background of the photo below. The churchyard of the 14th century church of St John the Evangelist lies beyond.

Oxburgh Hall lies in the Breckland village of Oxborough. You can read about it here.


Postscript: on the subject of moths, I found this extraordinary article about camouflage, genes and pigment adaptation to surroundings. Do take a look!
Posted by Caroline Gill at 08:30 4 comments:

The Big Butterfly Count finished on 7 August, although records can still be submitted until the end of the month. We did a count on 6 August at NT Oxburgh Hall, and you can see the results in the chart below.

We were particularly thrilled to see the Painted Ladies drawing nectar from the Heliotrope in the parterre garden.

This is our list, but, of course, we continued to see other butterflies (which were not counted) after the allocated 15 minutes. The photos below the chart show a mix of the counted butterflies and the ones that escaped the survey. 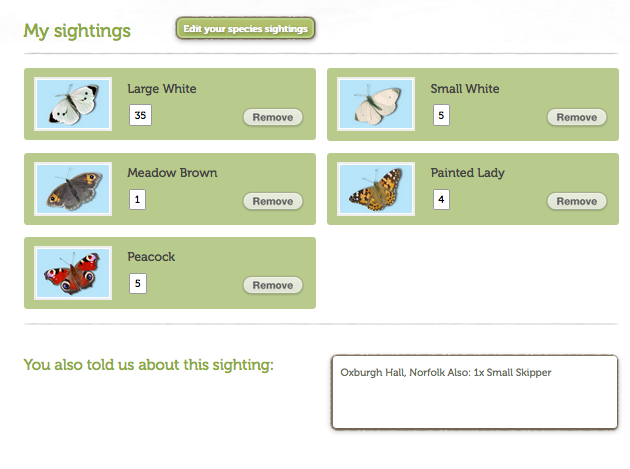 We also saw a large moth, which I shall try to identify before posting its photo. Watch this space. I have posted it on iSpot, but think I have now worked out what it is ...
Posted by Caroline Gill at 09:36 2 comments:

Welcome to my Tree Following post for July and early August 2016.

Every so often something inspires me to write a short diary post about my trees, so here is one about the Silver Birch ...

I looked out and saw the mother Magpie with her single offspring. They made their way together to the base of the feeder on the Silver Birch and began pecking around beneath it, giving out the occasional squeaky call. Suddenly a Jay flew in, and landed on the coconut and proceeded to feed. After a few moments, perhaps disturbed by the Magpies, the bird flew off over our fence towards a large oak tree that borders the local nature reserve. I was about to return to my desk when I realised that the Jay had now been joined by a mate (or adolescent offspring), and the two birds disappeared together.

If we have Jays and Magpies rearing young in our neck of the woods, it can hardly bode well for the smaller garden birds, and yet the population of Blue tits and Great tits, in particular, seems healthy at the moment ...

This post is largely for an odd numbered month (July), so I will only post the sightings seen since the last round-up. My next Tree Following post (August and early September) will include the complete list.

Highlights this month have included the appearance of two new butterflies for my garden record, the Gatekeeper and the Holly Blue. The Gatekeeper made a beeline for the patch of garden around the Cherry Tree. The Holly Blue was spotted in the same patch - but, not surprisingly - on a Holly. I do not expect that my chosen trees had anything to do with its arrival in the garden, but I include this butterfly because it touched down within a metre of the Cherry.

The season is turning fast. Daylight gives way to dusk at about 8.30pm. The first leaves on the Silver Birch are turning yellow. The seedhead catkins are a rich brown.


The patch around the Cherry has been weeded, and the little tree has had a growth spurt. I suspect a Leafcutter bee is taking rounded chunks out of its leaves. I rather fear that wasp season is about to begin, and last year we had a few hornets, too ...

Ladybird with a black blotch 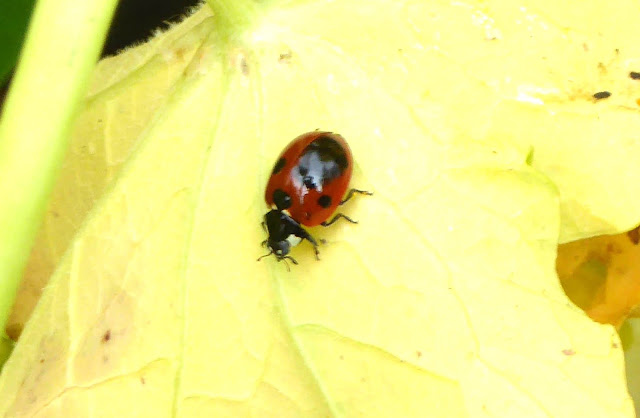 I am always on the look-out for unusual Ladybirds! And in my neck of the woods I have seen very few Ladybirds of any kind in recent days.

The one in these photos was making the most of the aphids on the Nasturtium leaves at the RSPB Flatford Wildlife Garden last weekend.

It looks large in the photos, but it was 7-spot-sized rather than Harlequin. The large black blotch on the elytra intrigued me. I was informed by the UK Ladybird Survey that a previous Ladybird with unusual markings was indeed a 7-spot, but that the insect in question had probably suffered from frost damage or had received its markings on account of a genetic mutation. The black blotch on this Flatford Ladybird shows up particularly well in the last photo, as the insect scuttles into the Nasturtium plant. 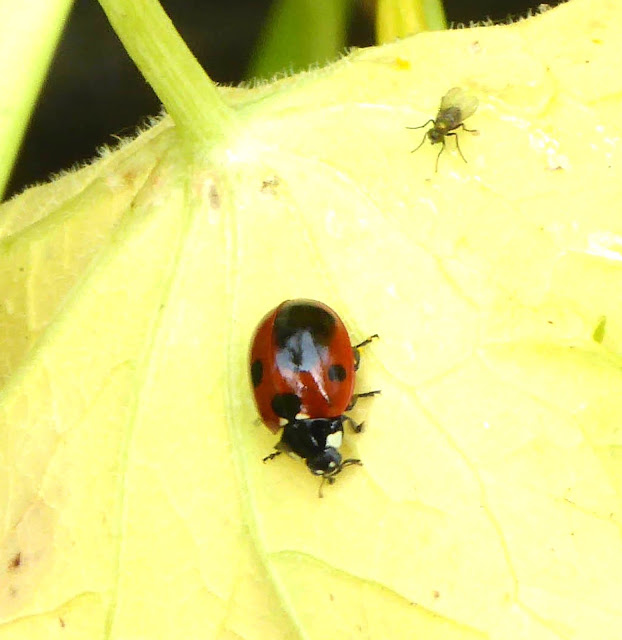 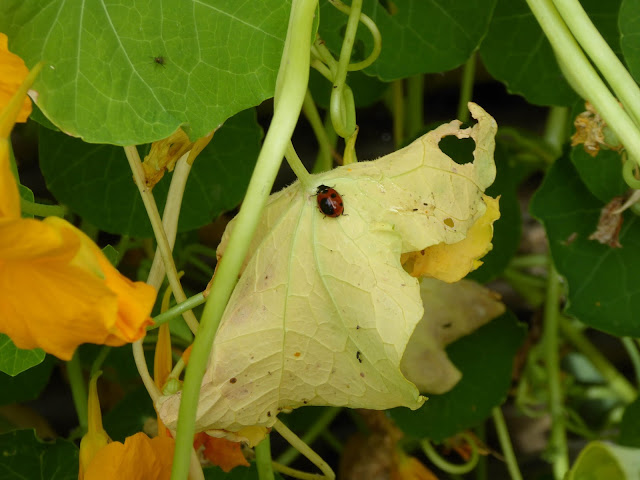 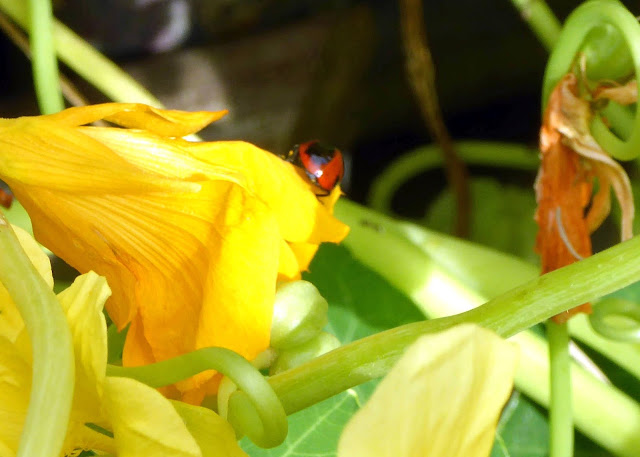 STOP PRESS: on the subject of collecting insect data (as opposed to the current craze for imaginary figures ...), take a look at this thought-provoking post from the Centre for Hydrology and Ecology.
Posted by Caroline Gill at 09:58 2 comments: 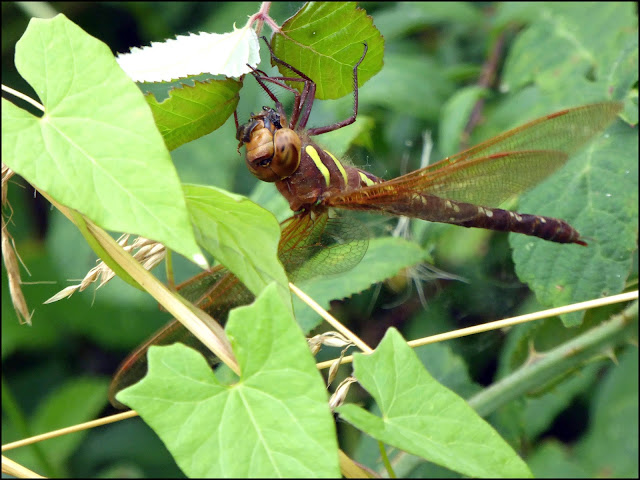 We saw reasonable numbers of butterflies in the RSPB Wildlife Garden at Flatford when we were doing the Big Butterfly Count, but we were both feeling that dragonflies and damselflies were hard to find when this huge Brown Hawker caught our eye. It is a female, and those bronze wings look stunning when the sun catches them. The male of the species has additional blue markings.

Incidentally, if you live within range of the Suffolk coast, you might be interested in one of the Poetry in Aldeburgh events (Saturday 5 November, 10-12 noon), a Poetry and Drawing Workshop. This session will take Constable's landscapes as a starting point (alongside poetry). The leaders hope to include drawing from observation and from the imagination.
Posted by Caroline Gill at 10:41 No comments: 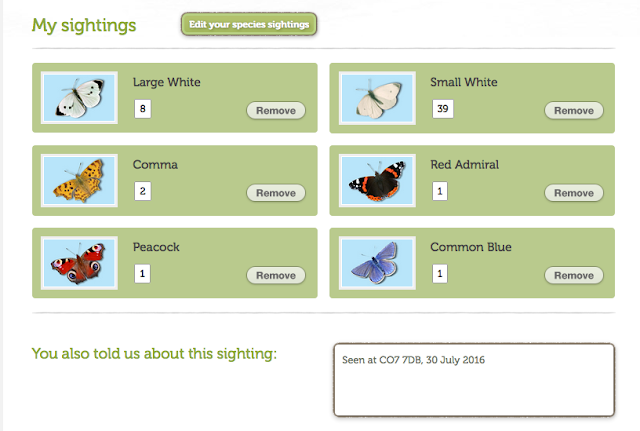 We have done two more Big Butterfly Counts since my last butterfly post. The count continues until 7 August, and sightings can be logged on the site until the end of the month, so do see if you can join in.

Whites were showing in reasonable numbers (the count lasts for 15 minutes) on both occasions; but as you can see, we failed to see either of the specified day-flying moths. Other notable omissions are the Small Tortoiseshell and the Painted Lady.

The Red Admiral in the photo was nectaring in the glorious grounds of Beth Chatto Gardens. 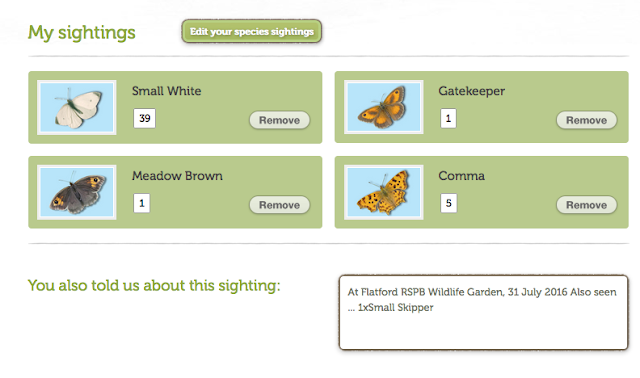