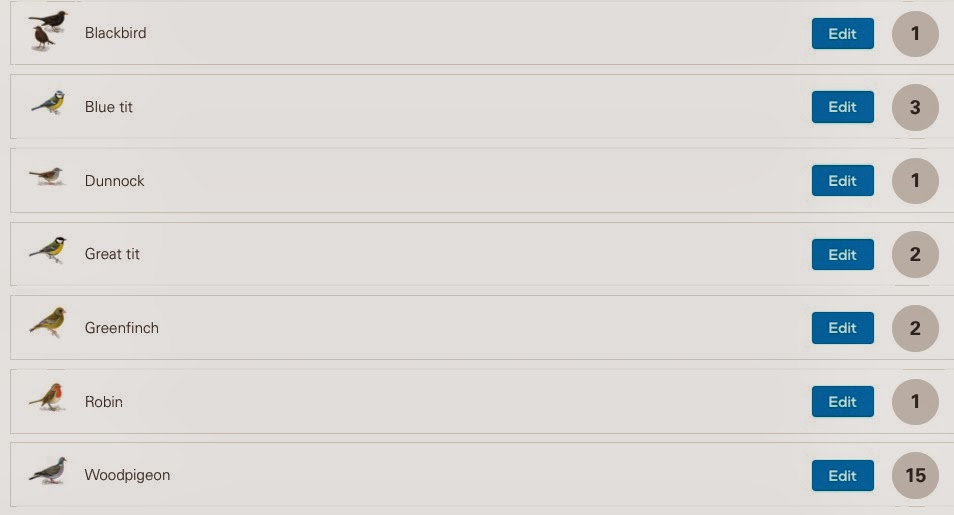 Well, how did you do, those of you who were counting?

These were my results from my RSPB Big Garden Birdwatch. I did my survey on Saturday morning from 10.45 (coffee time!) to 11.45 am, and I have to report that there weren't any real surprises.

Sadly our regular flock of Long-tailed tits did not show up until the afternoon, so couldn't be counted. Our Wren didn't appear either, but the Wren is a shy bird so I wasn't very surprised.

By the time I logged my results, over 53.000 results had been submitted - despite a temporary glitch (or so it seemed to us) with the RSPB website. 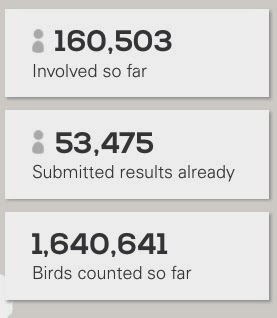 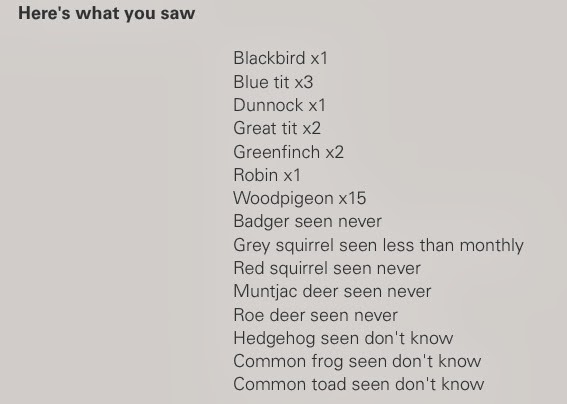 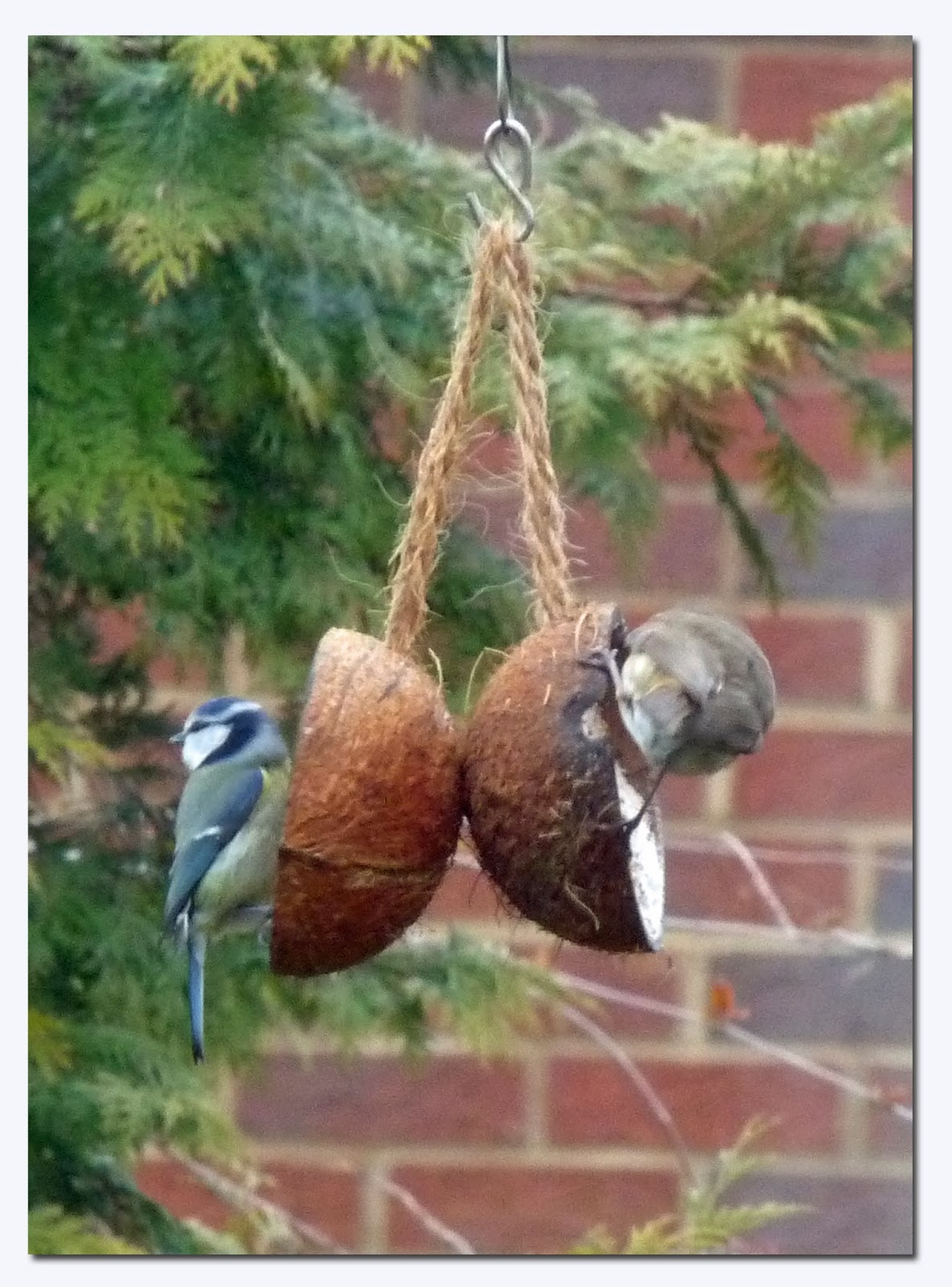 STOP PRESS ... a new kid bird on the block today ... I had just finished lunch when the graceful white wings of a Little Egret flapped over our garden, presumably from the local nature reserve nearby. It's the first time we have seen one of these birds from our window ... I saw my first one ever just over 20 years ago, on my first visit to the Gower Peninsula.

There was no time today to grab a camera, but here's a pic. of three I took some years back on a visit to Laugharne in South Wales ... 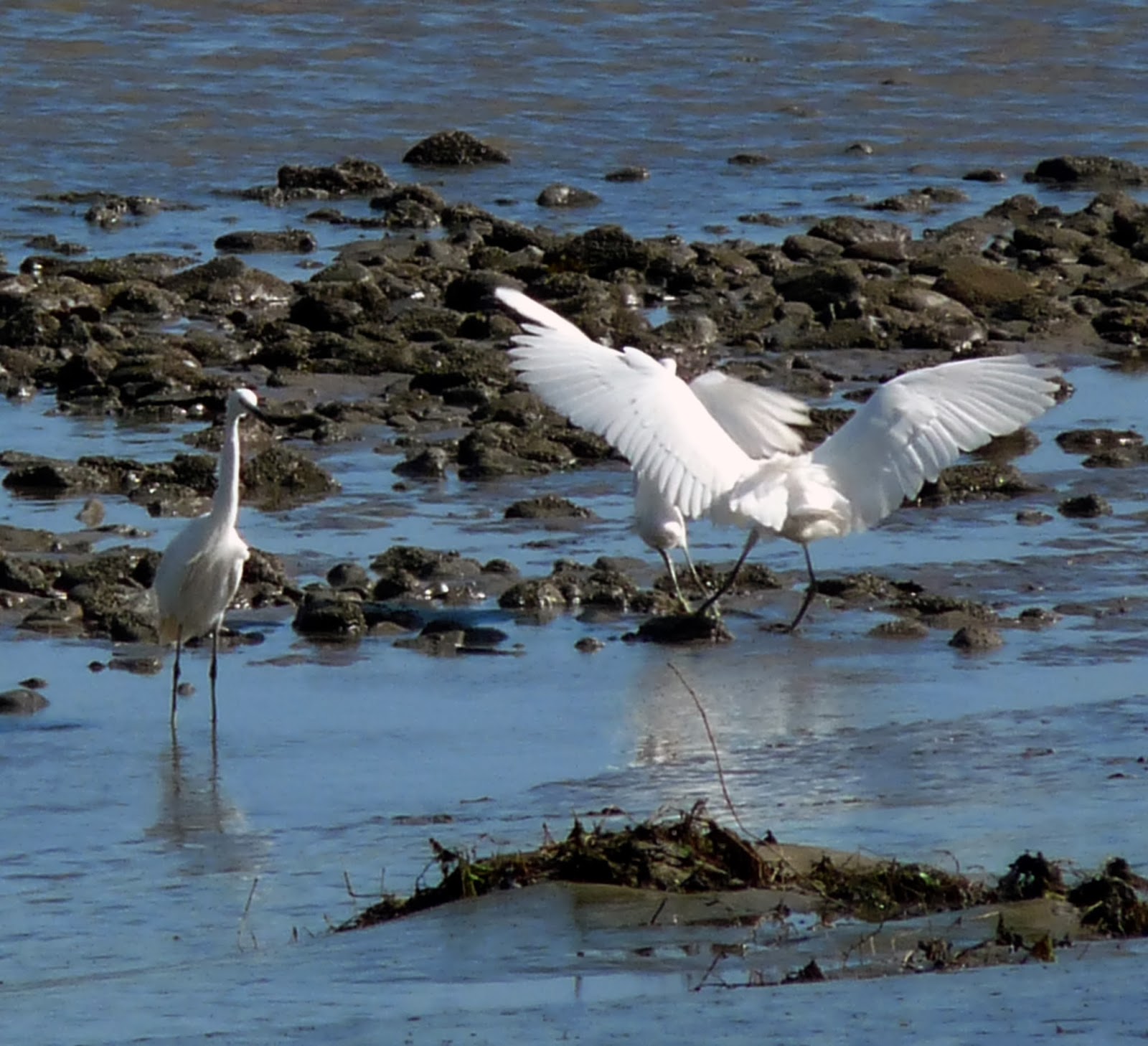 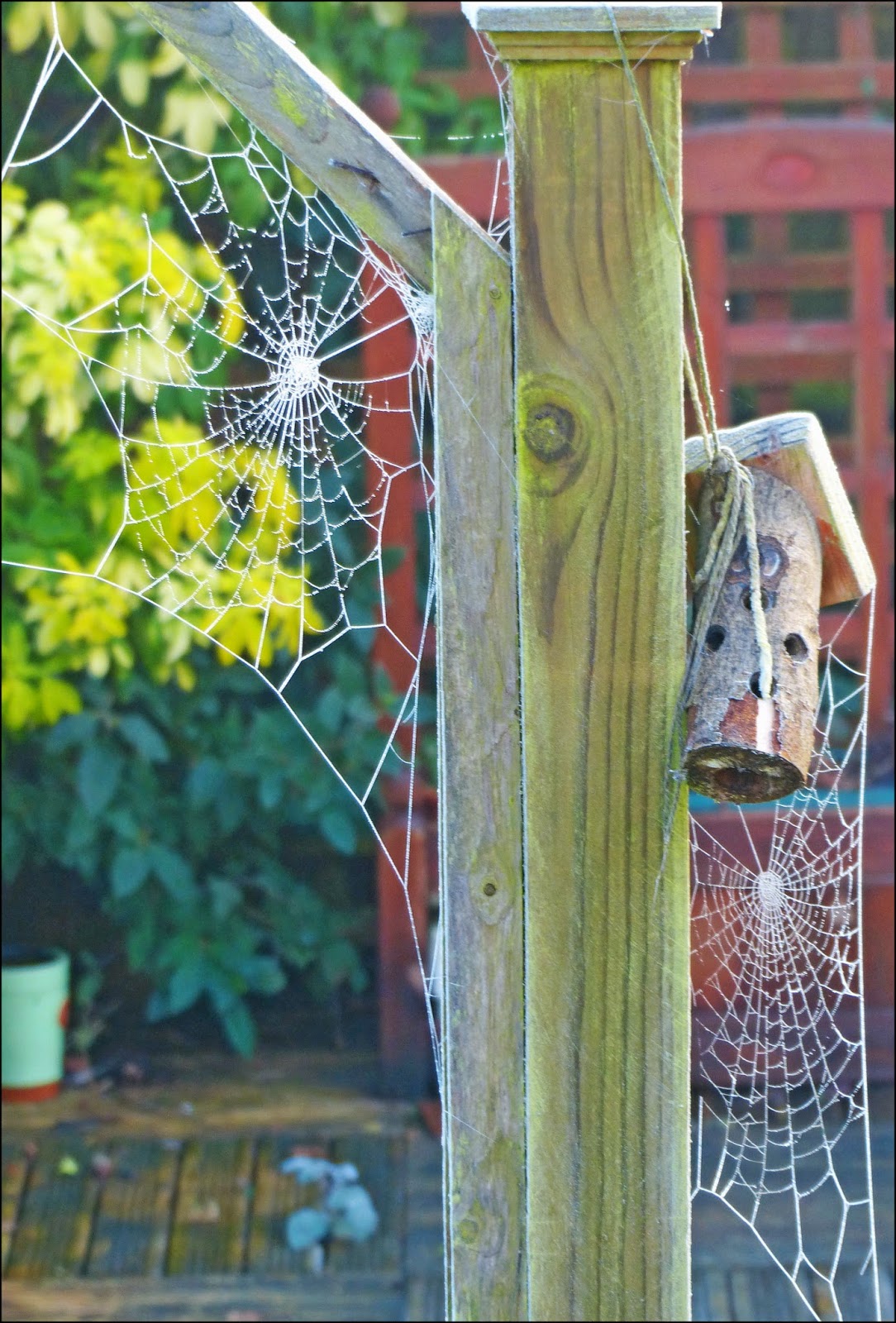 We have had some strange weather recently, with frost and fog interspersed with sleet, rain and sunshine. We woke up to a frosty morning earlier in the week, and when I looked out, I could see that the spiders had been working on their webs. The frost was beginning to melt, and while the webs might have looked better an hour earlier, I quite like the effect of the melting water droplets. 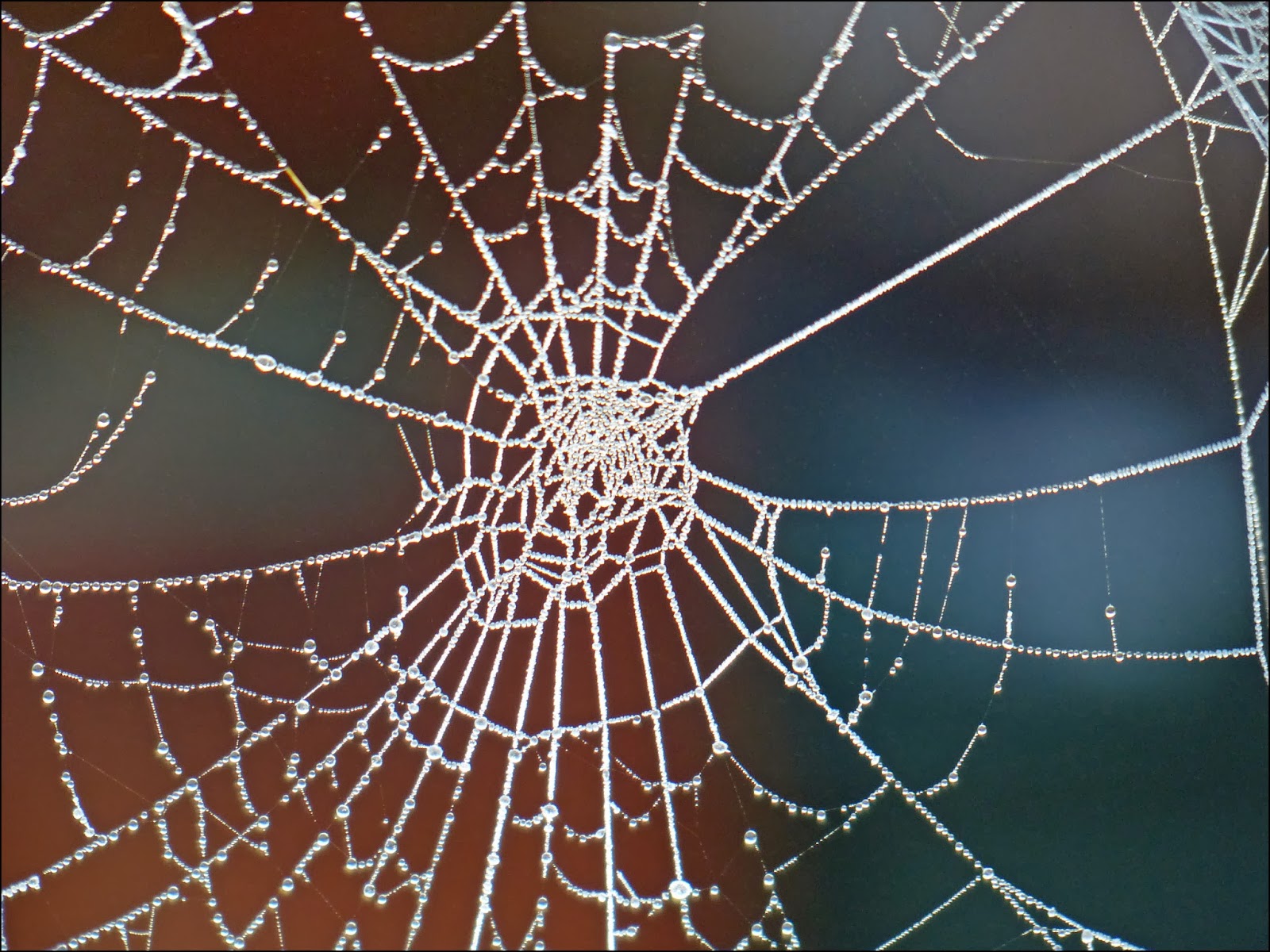 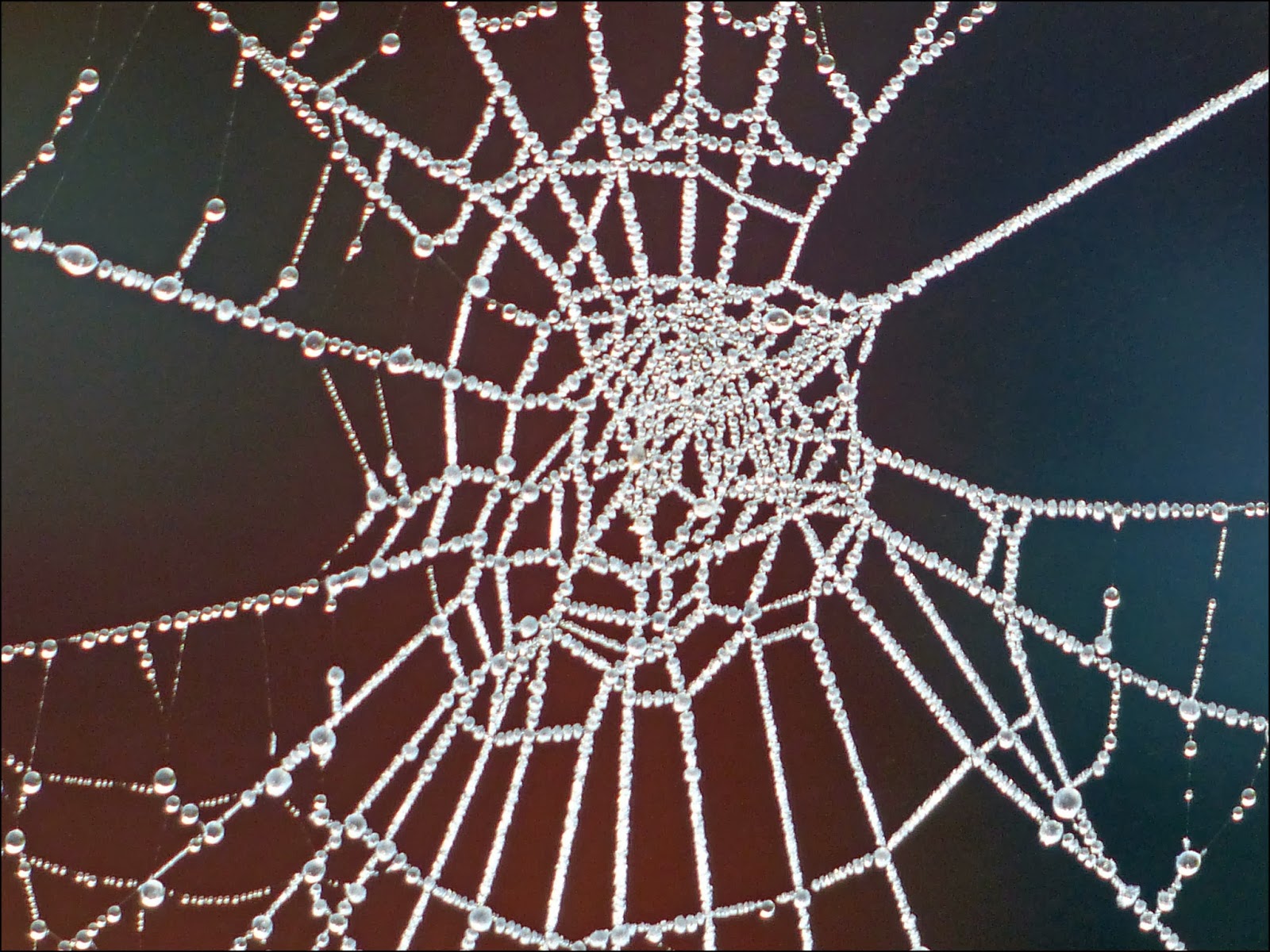 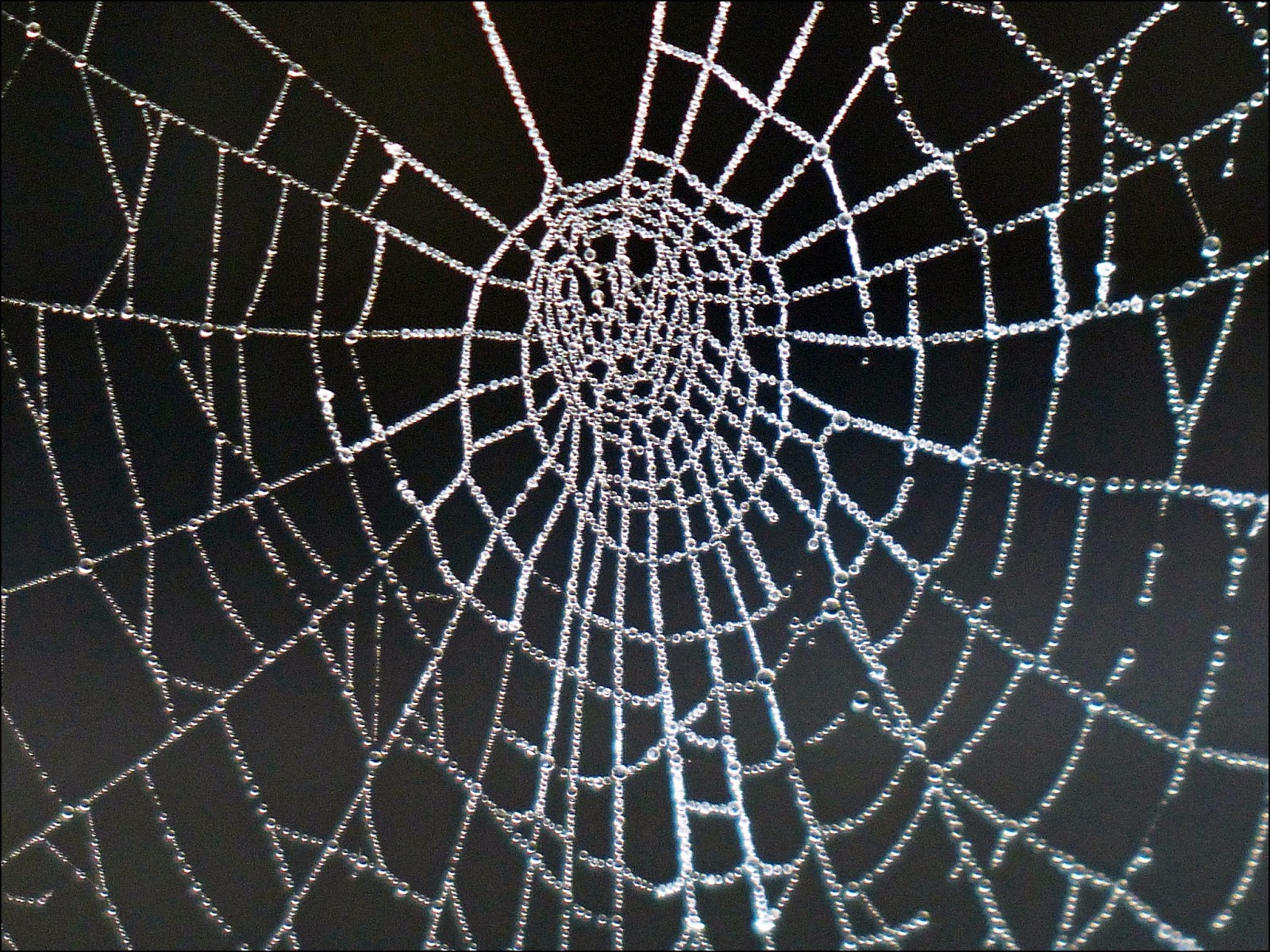 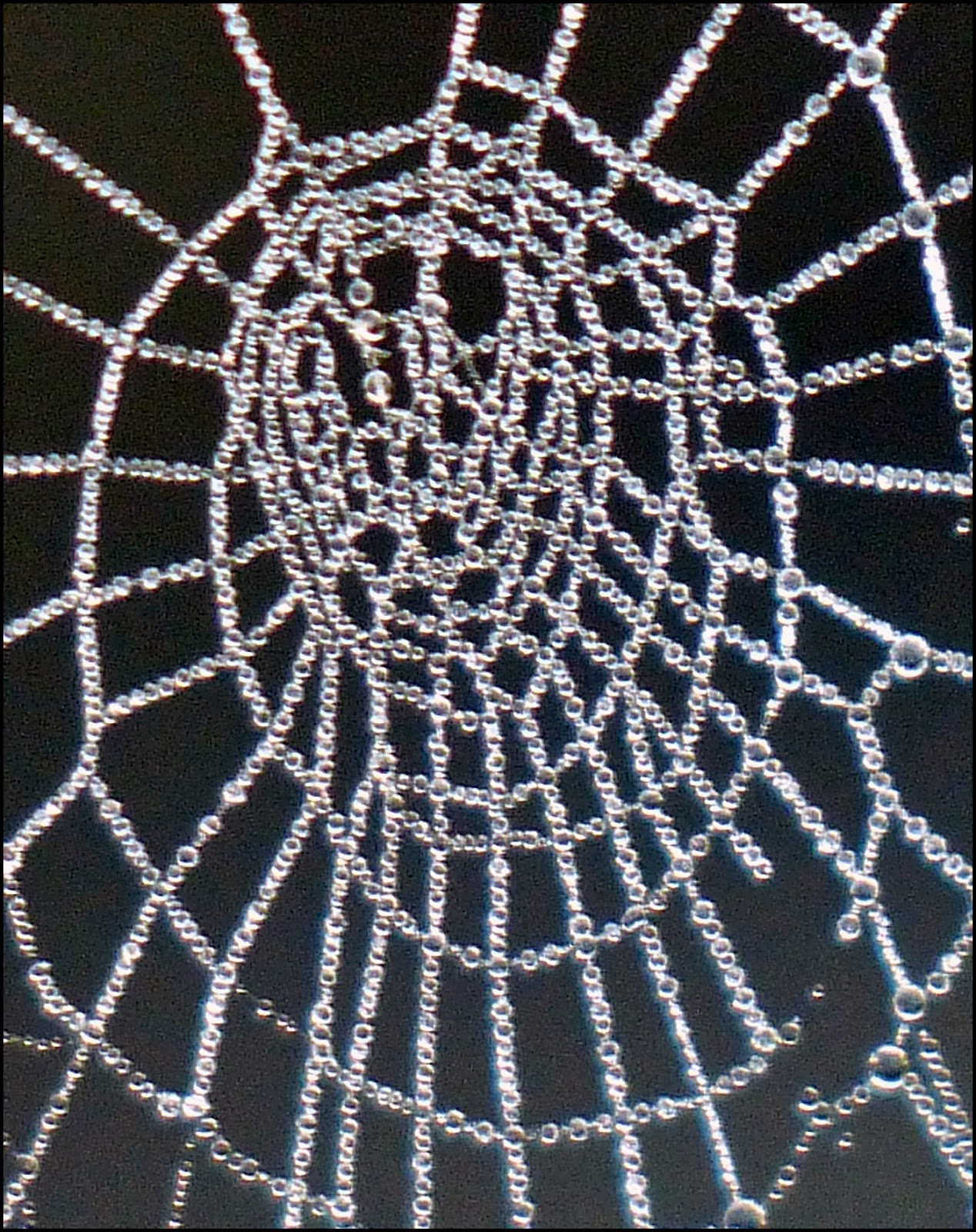 I don't know where the outdoor spiders were hiding, but this one (alive or dead?) has been keeping us company indoors. It seems a shame to spoil the web, though to my eye it is not such a thing of beauty as the ones in the garden! 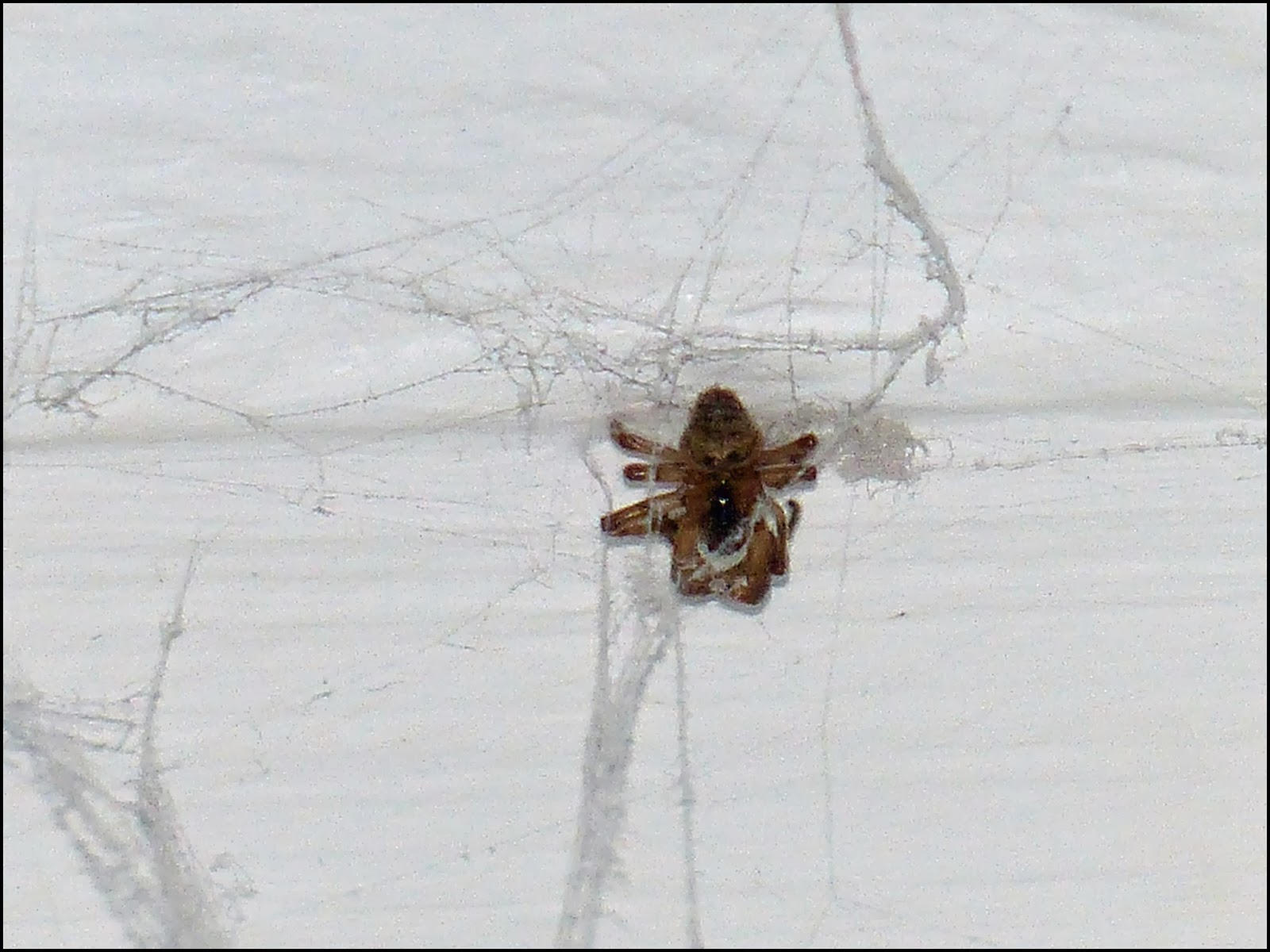 And a final photo for this post, just to show you our foggy outlook! But the sun has been shining today, there are two tiny daffodils in the garden and the shrub next to the front door has small flecks of new green growth. 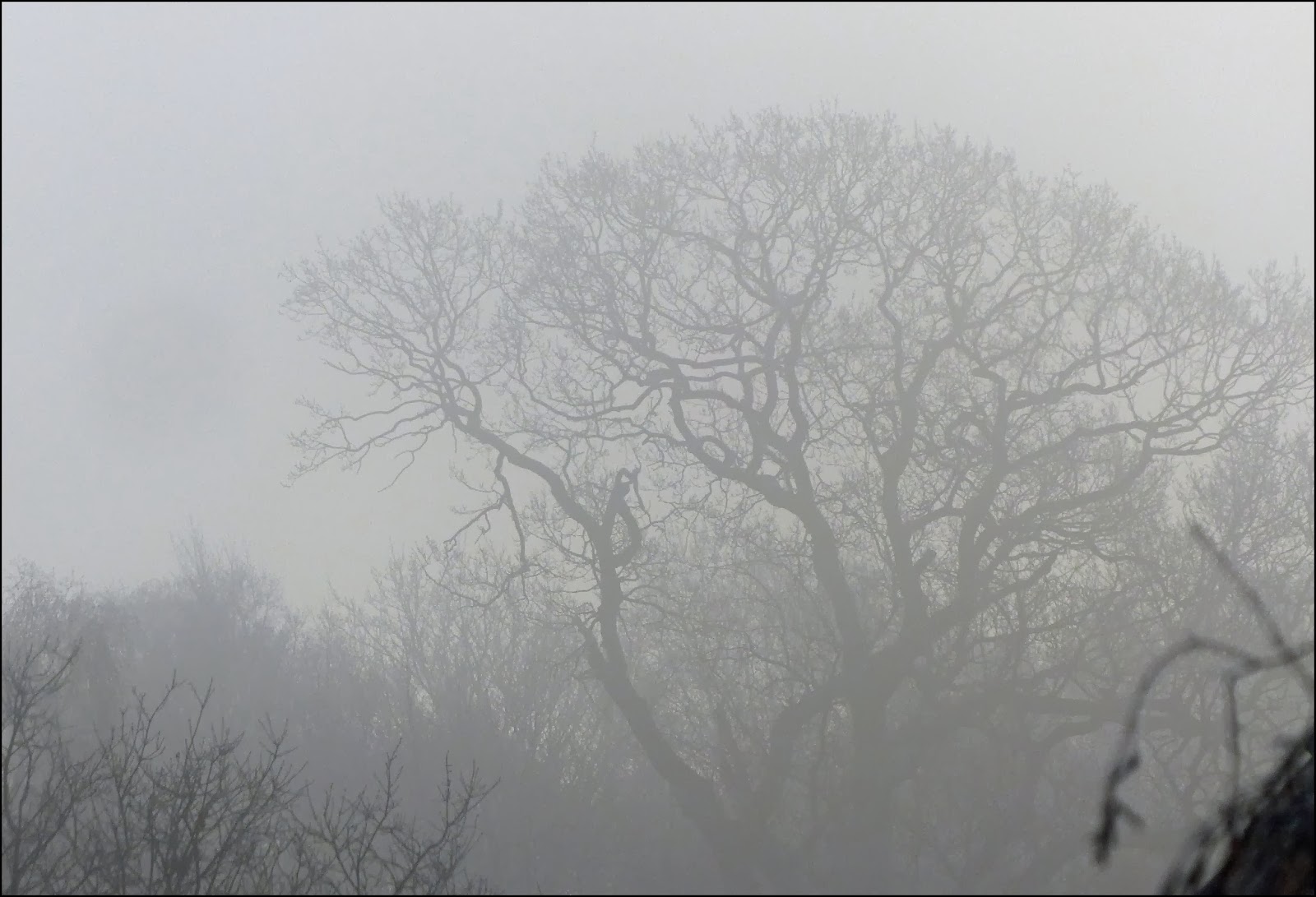 Beautiful Birds (and other wildlife) ~ 2014 Update

With the RSPB Big Garden Birdwatch scheduled for this coming weekend, it seemed a good moment to post my updated 2014 list. All the birds in my Home Patch list also appear in my complete list. I am only noting my initial sightings of a species, but have been surprised at the number of Turnstones I have seen in 2014, largely at Woodbridge on the Deben estuary and at Southwold (where I got wet feet in my attempt to get a wave-edge photograph).

Home Patch ~ A Thrush (with a ring) 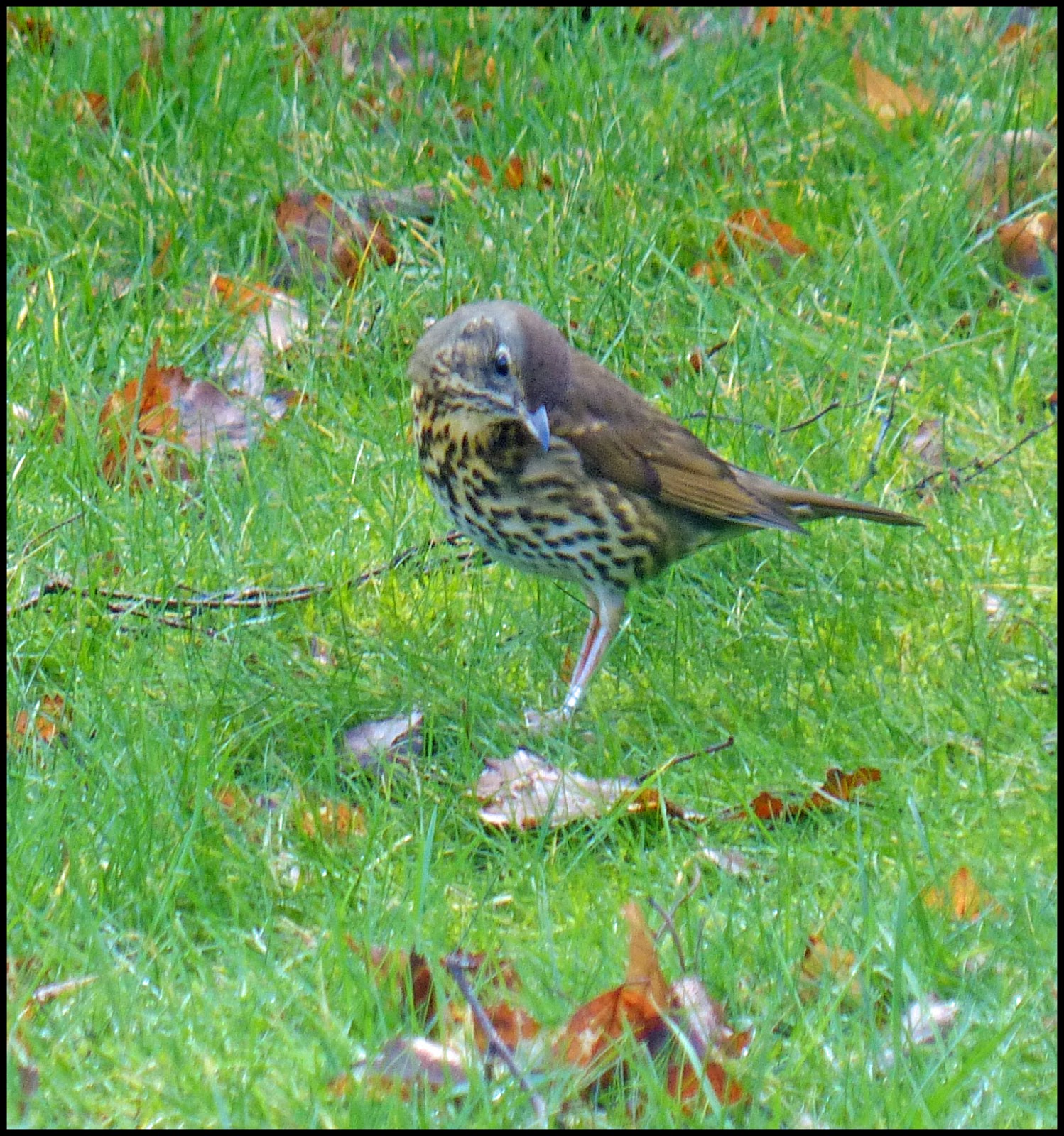 We have had a visiting Thrush for some time now. I think it is a Song Thrush, but am not entirely sure. Mistle Thrushes are paler in colour and their speckles are almost black. 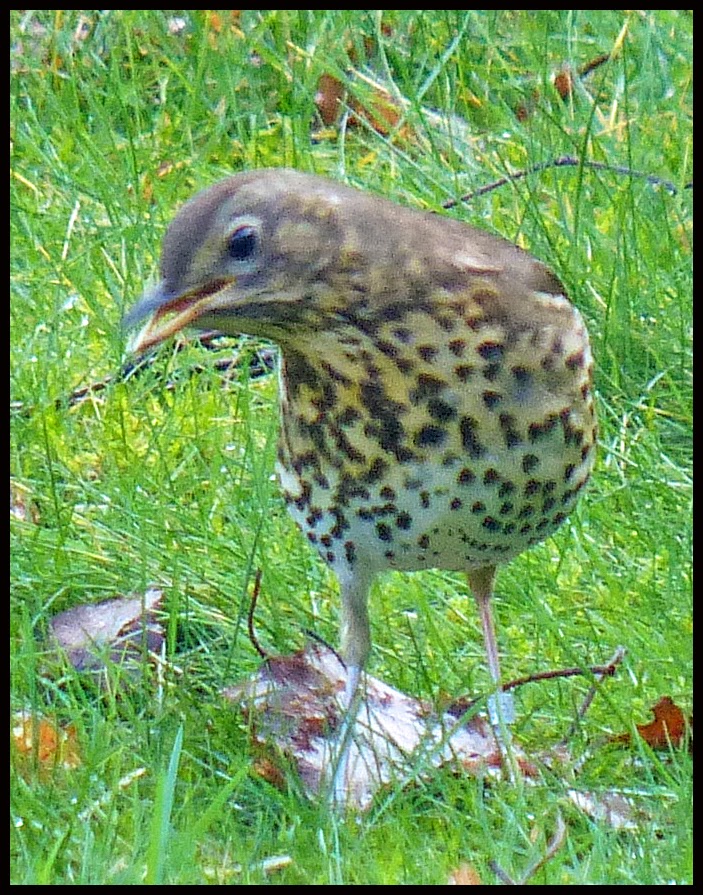 Song Thrushes are classed as Red in terms of their conservation status. 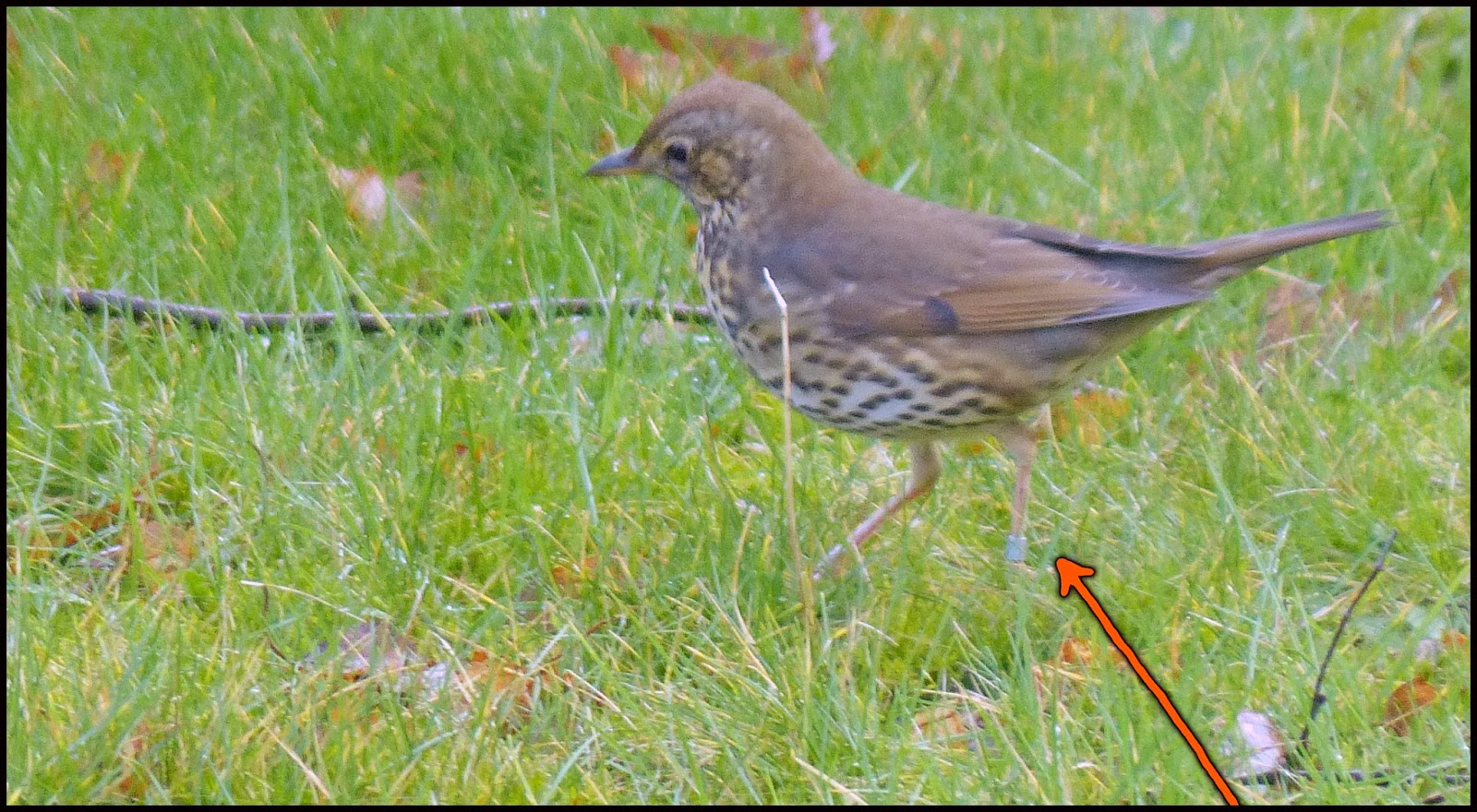 As you can see, this this Thrush is sporting a ring. I had not spotted the ring until I saw these photos, which once again proves to me (whether the picture quality is good or not - and these photos were taken through double glazing) that my camera is a useful tool in my wildlife watching adventures.

It would be interesting to know where the bird was ringed and where it was last recorded. I was astonished to read on the British Trust for ornithology (BTO) site that 'over 900,000 birds are ringed in Britain and Ireland each year by over 2,600 trained ringers'. 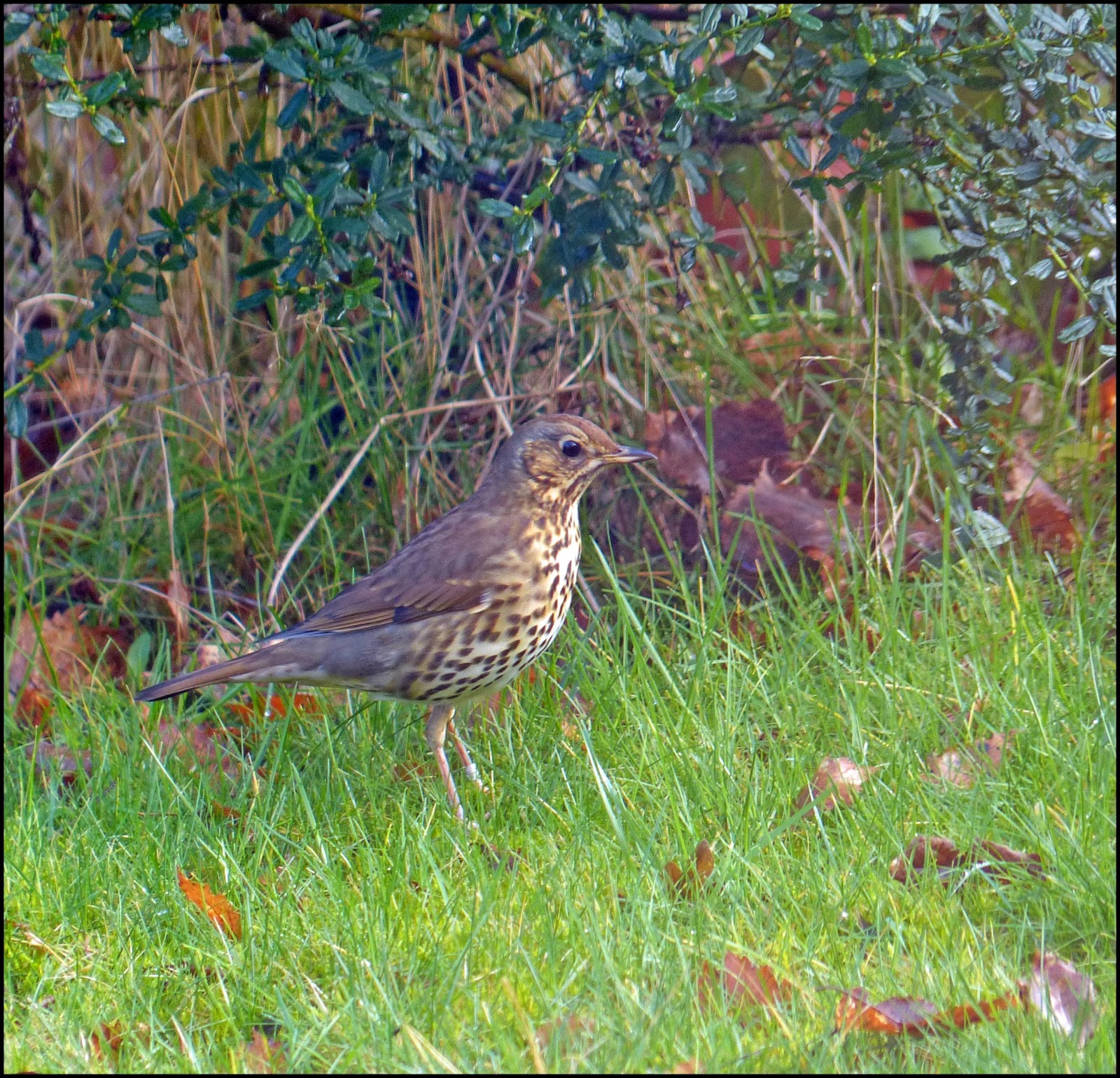 As you can see below, there was also a Blue tit in our silver birch. In fact, there was a small flock in the garden. 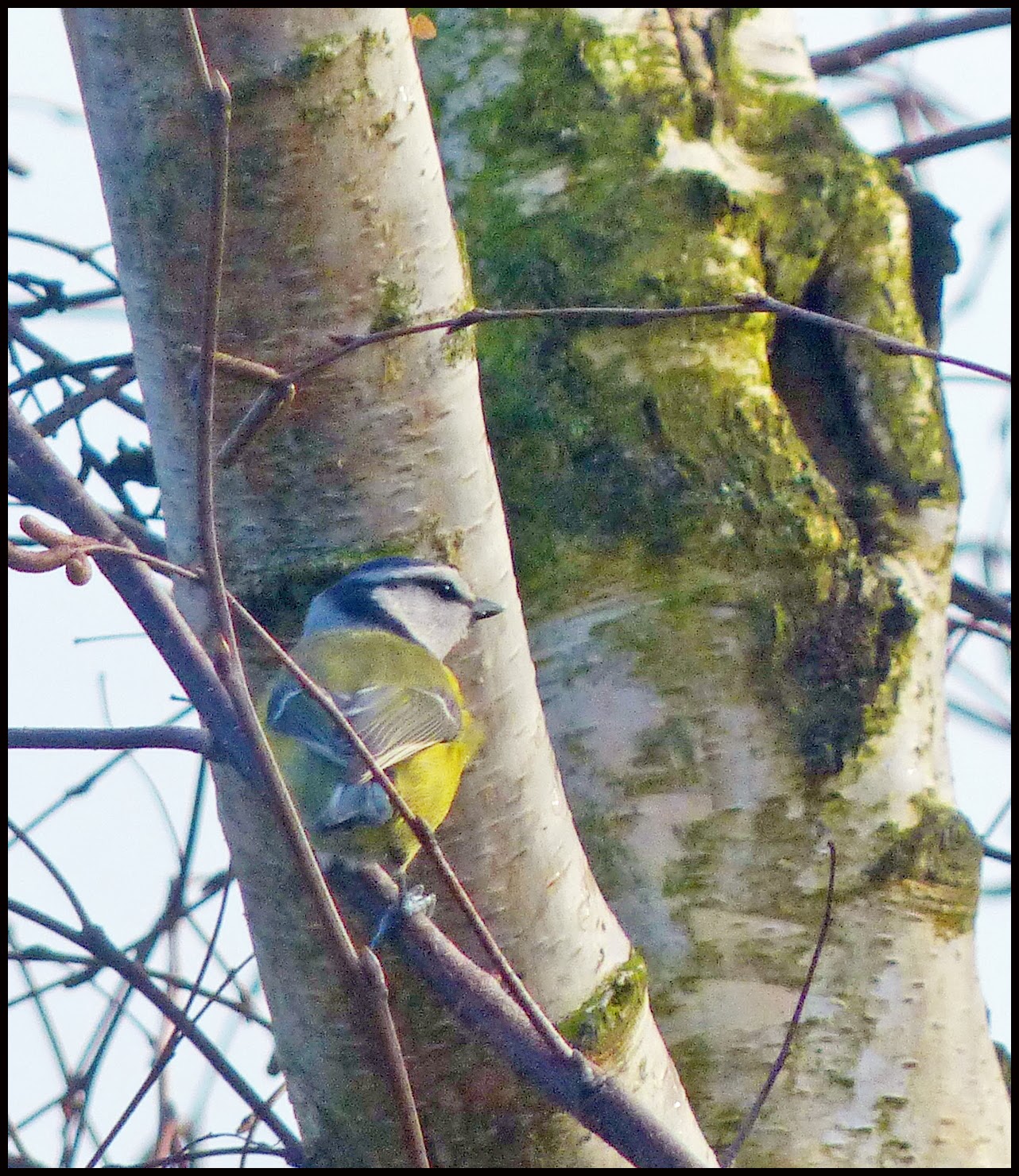 There have been reports (see here, for example) of a Great Northern Diver on Alton Water on the Shotley peninsula. I made my way over to the reservoir Water Park this afternoon to see what could be seen.

Some time later I left to come home, feeling that the main feature of my afternoon had been my first rainbow of 2014 ... or rather, a hat trick of three rainbows. 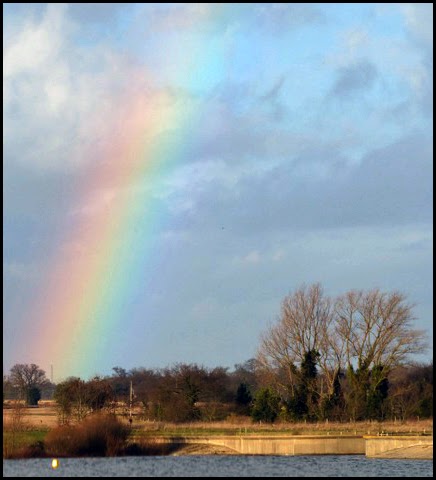 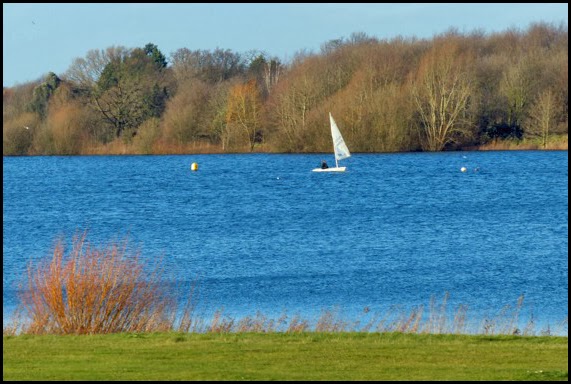 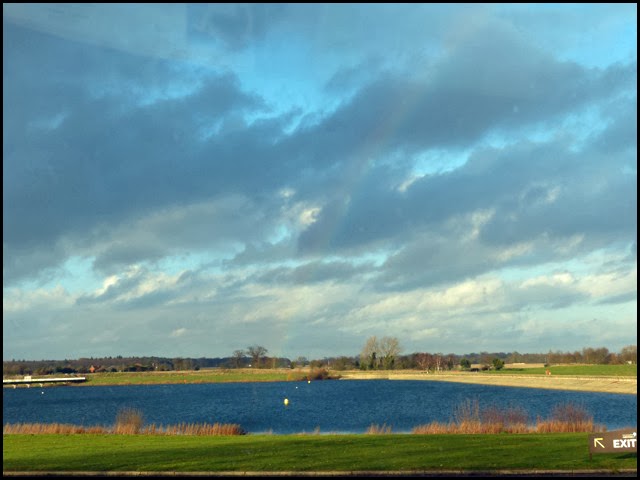 I read Arthur Ransome's tale, Great Northern, back in the summer. When I heard about the sightings of the Diver, I particularly hoped to see one here in Suffolk, Ransome's home county from 1935, when he left the Lake District.

There were a few people with binoculars at Alton Water Park who seemed to be on the lookout for the Diver, but I did not think I had been lucky on this occasion. The rainbows were magnificent against the winter sun and so were the Greenfinches (in the photo below), who were tucking into seeds provided by the Water Park staff. There were also a good number of Chaffinches about. 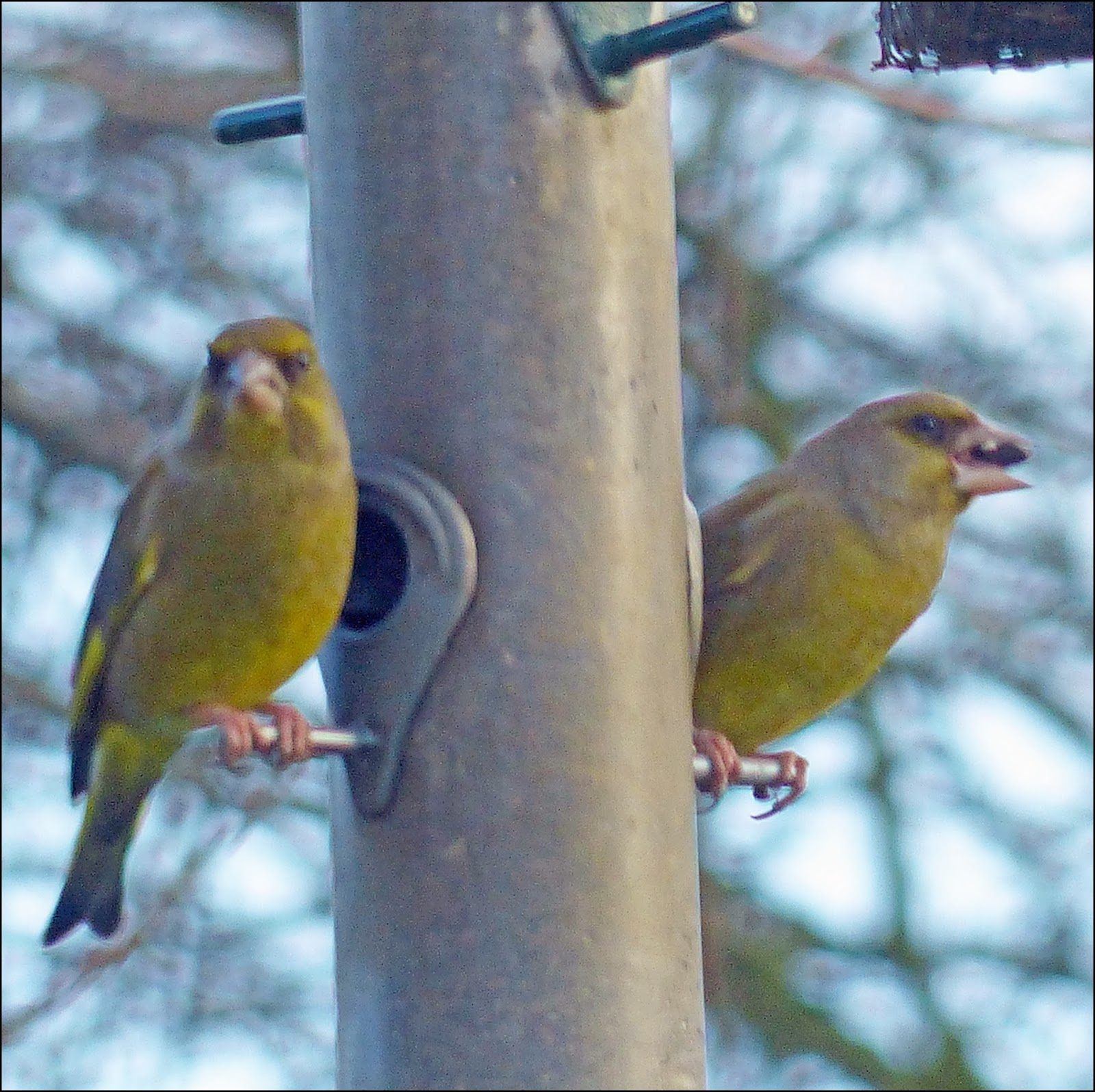 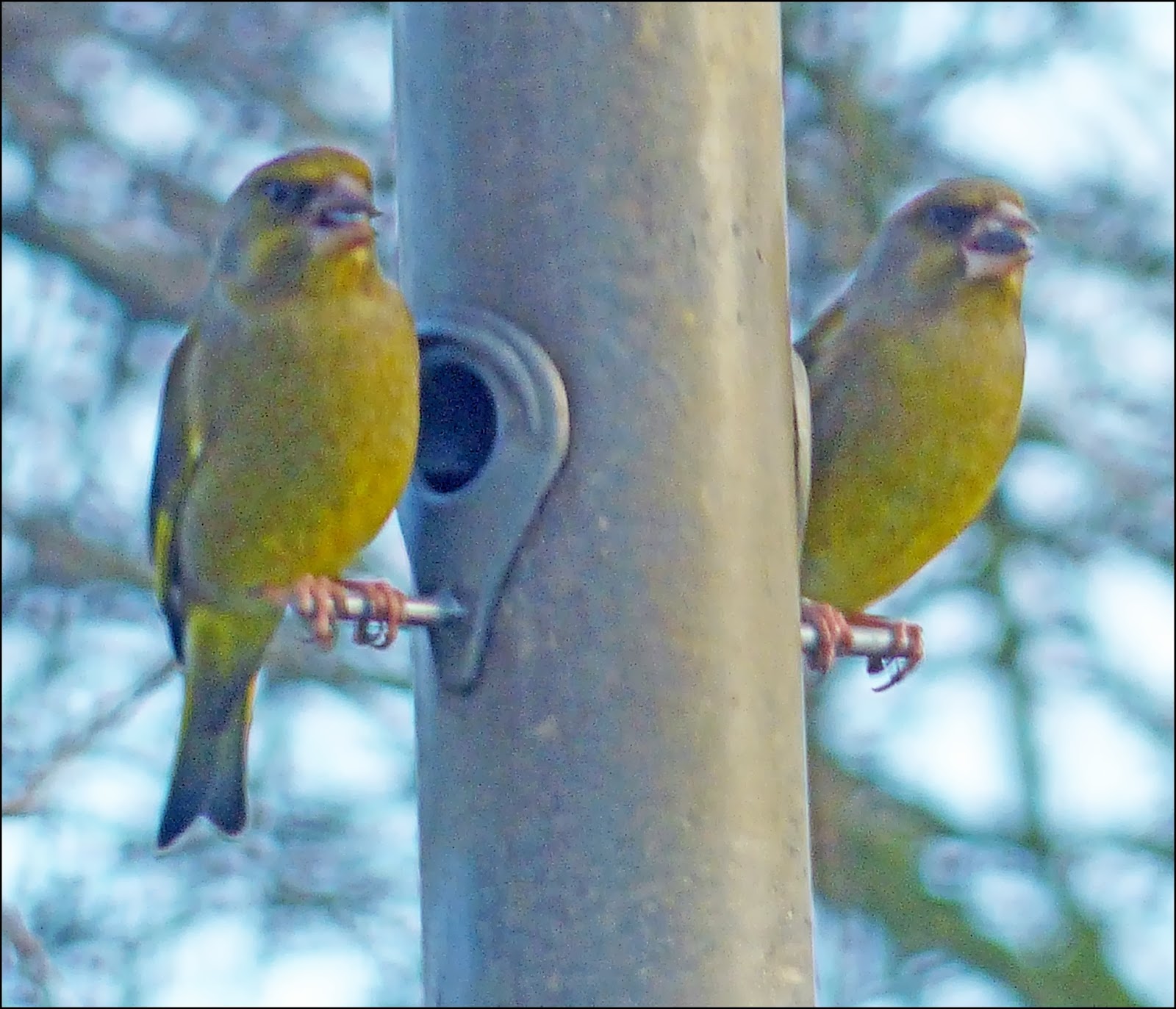 On my journey out to Alton Water, I had spotted an Oystercatcher at Wherstead; and on my way home, I pulled in to watch a flock of Greylag geese and a small gathering of ducks which I think are Wigeon.

Later, when I uploaded my photos, it began to dawn on me that perhaps I had been more vigilant this afternoon than I had realised. What I had clicked away at in great haste and had then dismissed as a Cormorant (it dived and disappeared along the edge of the reservoir with great speed) may well have been the Diver after all. I only have one poor shot ... but take a look below and see what you think. My hunch is that it is a juvenile and that it is definitely not a Cormorant: for a start the bill does not tip downwards. 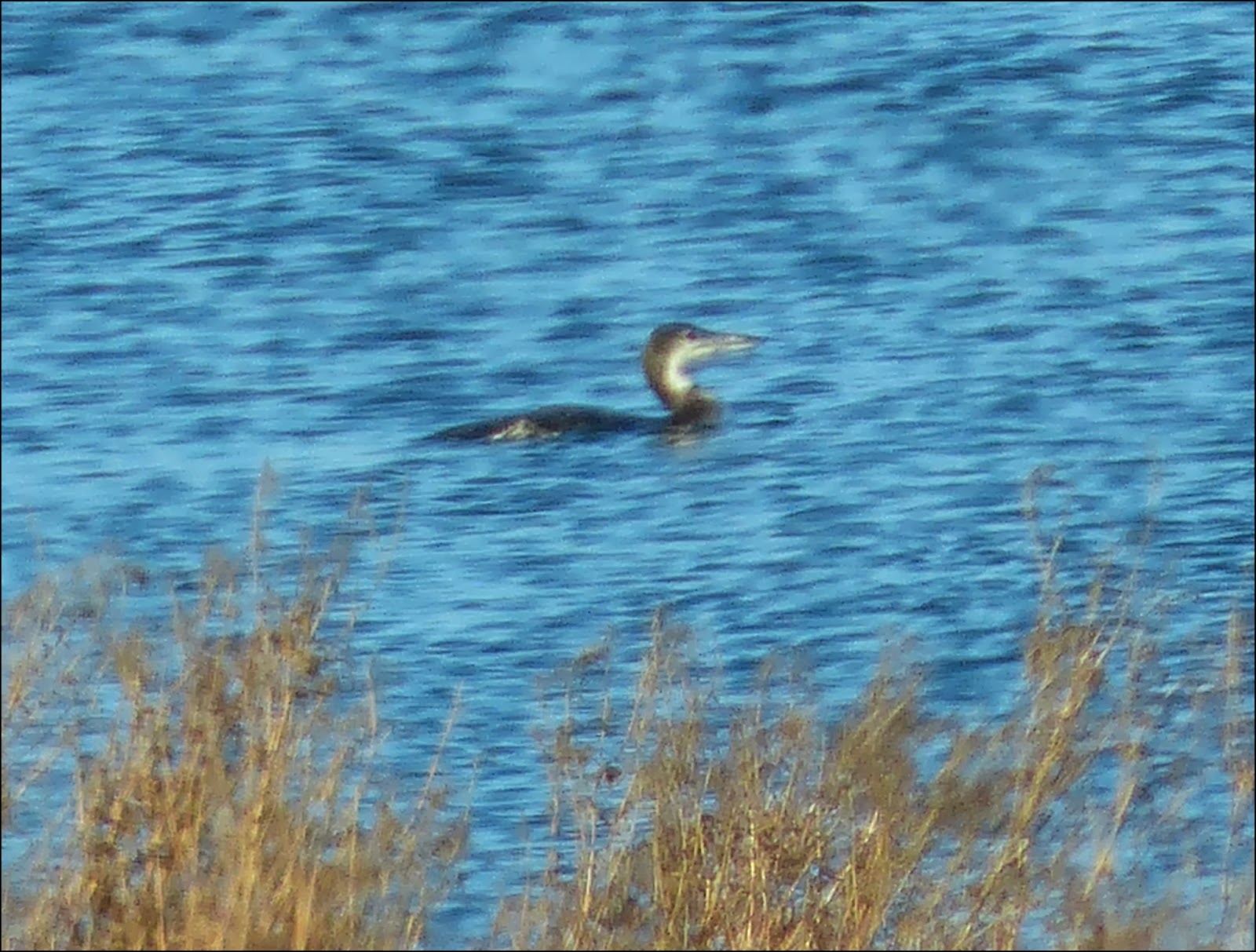 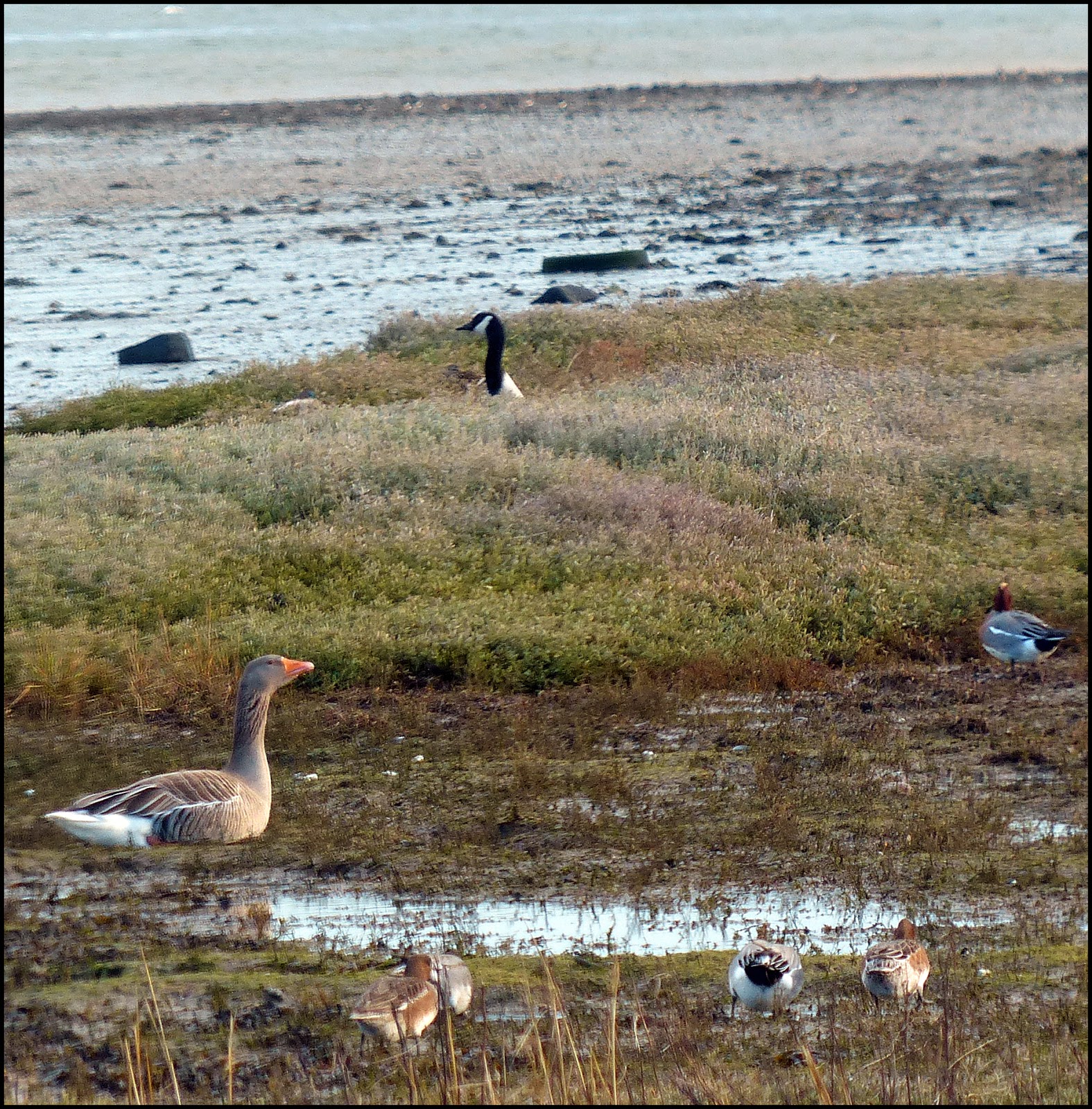 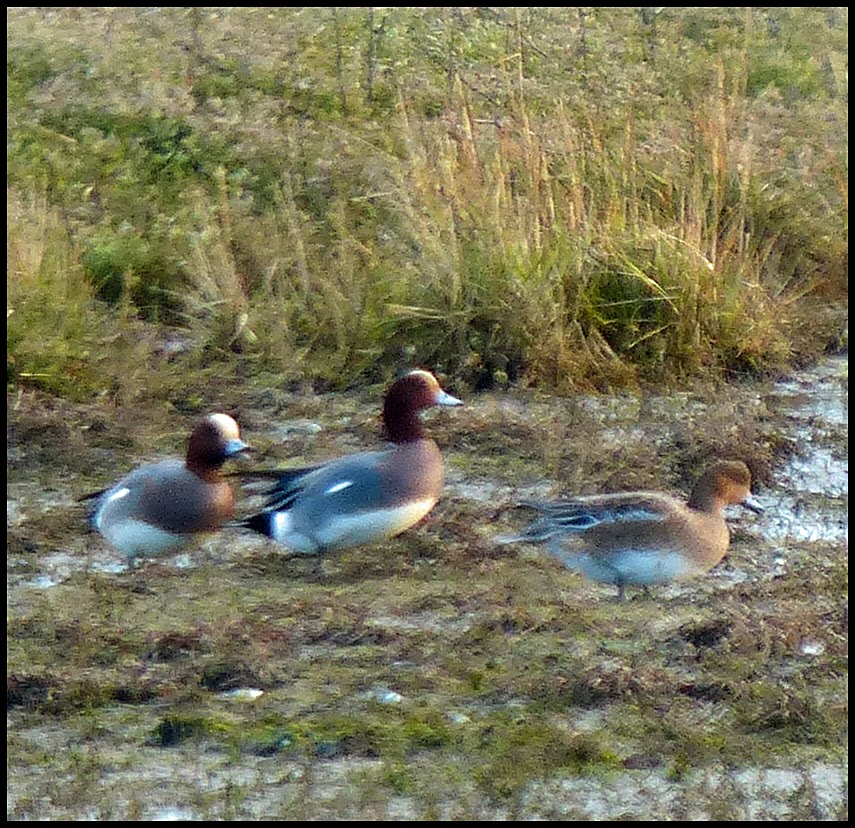 In my wildlife watching there has only ever been one other occasion when I came home feeling a little disappointed, only to find something unexpected in my photographs ... and that occasion was when I was in Greece, looking out for Caretta caretta, the sea turtle.