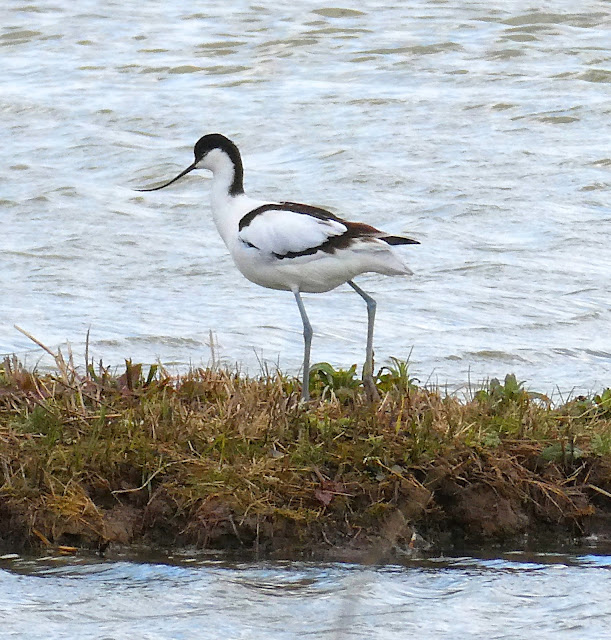 We decided to revisit RSPB Boyton Marshes yesterday afternoon, a Suffolk nature reserve we have been to once, or at most twice, in the past. We had hardly left the farm, the cattle and the car park behind when we saw Avocets. We have watched these elegant birds a few times over here in East Anglia (and have even seen chicks at WWT Welney); but when I was a teenager in Norfolk, they were fighting for survival. Many of you will recognise the Avocet from the RSPB logo.

We saw some other beautiful birds on the reserve: Mute Swans, Teal, Curlew, Grey Heron and Marsh Harrier, to name but a few. We also had good views across to Havergate, Suffolk's only island. You can see the western end of the island in the photo below (you can click on the photo to enlarge it), with the spit of Orford Ness on the horizon in the far distance.

I love islands and was thrilled to locate this one. It is run by the RSPB for the benefit of wildlife. Visitors arrive on boats from Orford, bringing their own refreshments as there are no food or drink outlets. There are, however, a few hides to facilitate bird-watching activities. 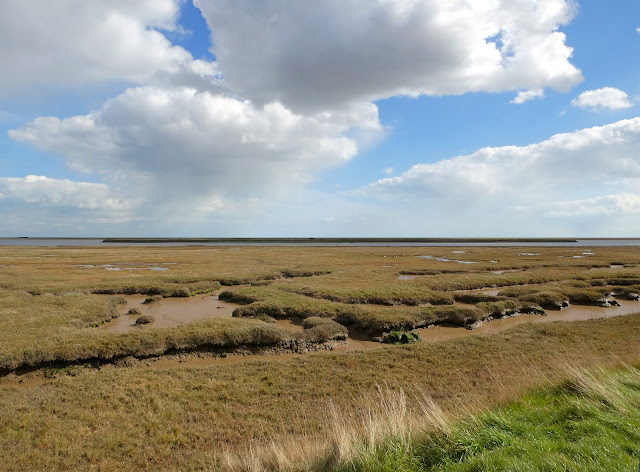 The tidal flats on the salt marsh began to fill up as the tide turned during the afternoon. 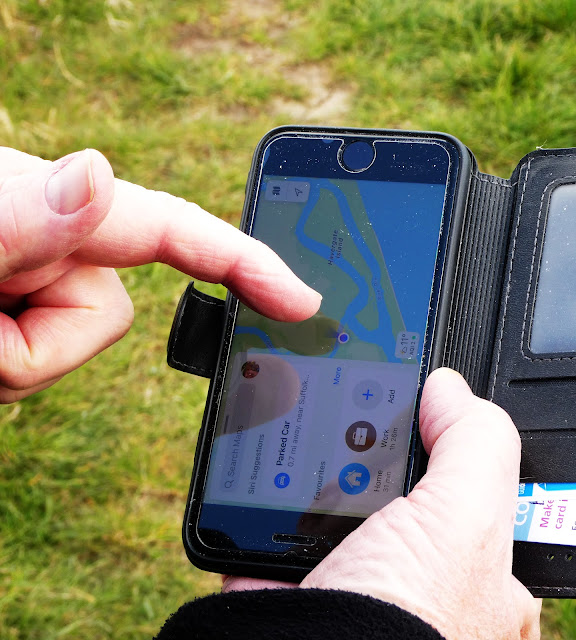 David was able to show me how the island nestles behind the spit of Orford Ness, the green strip on the right in the map on his iPhone screen. 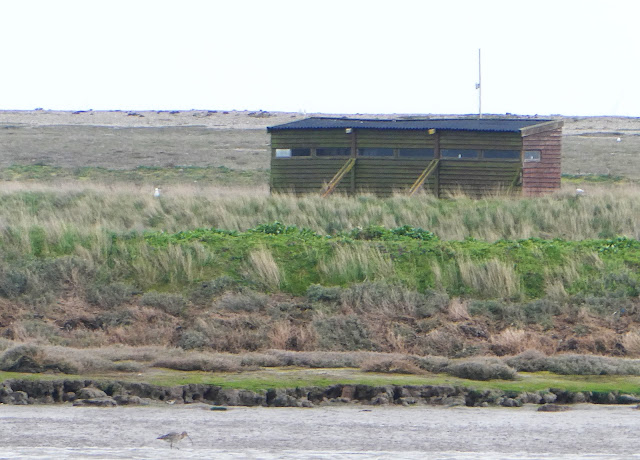 You can see one of the hides in the photo above. This was taken with my zoom lens extended in strange shadowy light. We had a mix of sun, showers and even a couple of hailstones. I hadn't even noticed this particular Curlew when I took the photograph.

We were delighted to see a variety of ducks on the mainland reserve. These were near the Avocets. The ducks we saw included the Shelduck, ... 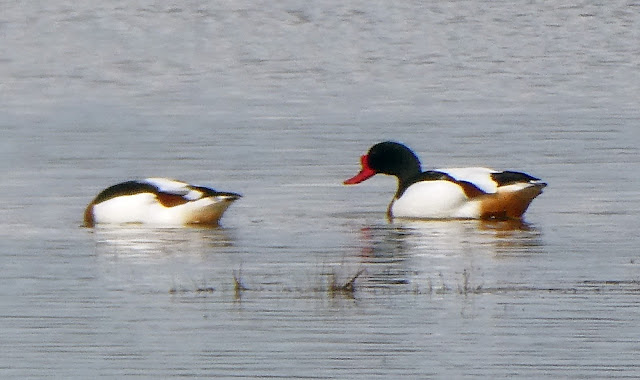 ... the Eurasian Teal (a female in this case, with her vibrant green streak) ... 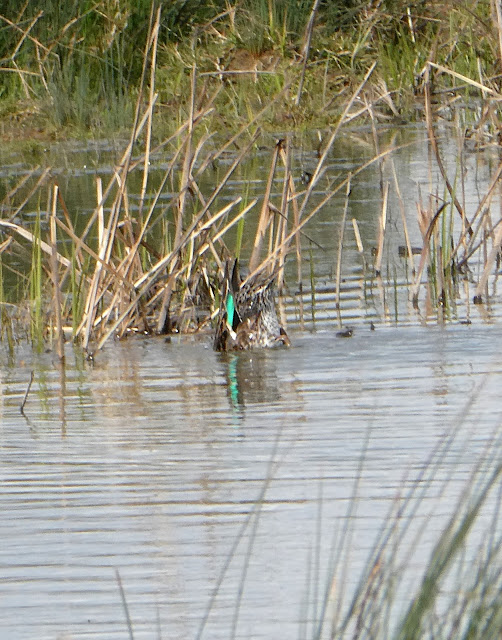 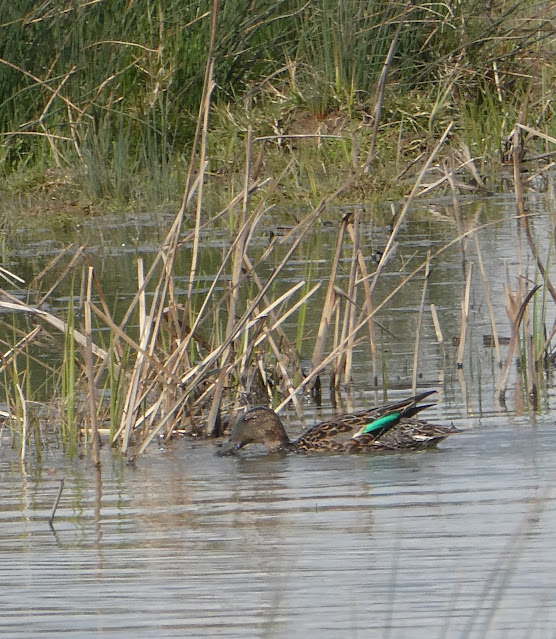 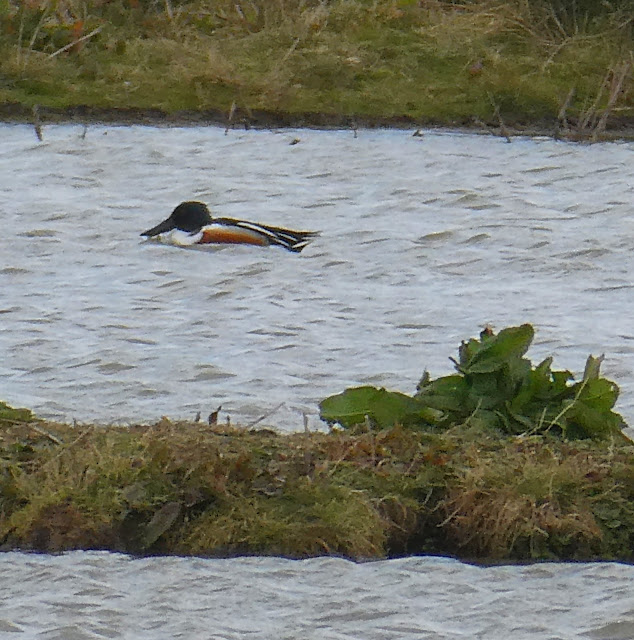 During the course of the afternoon we encountered several Grey Heron. 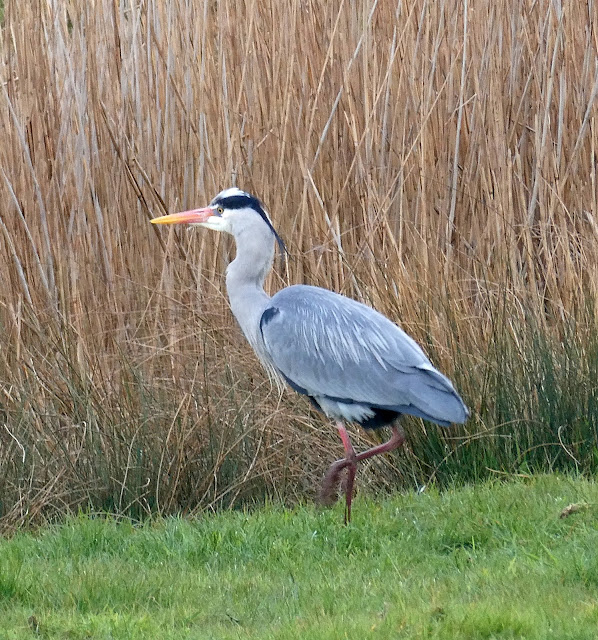 You can see from the next photo why it is such an ideal landscape for ducks. 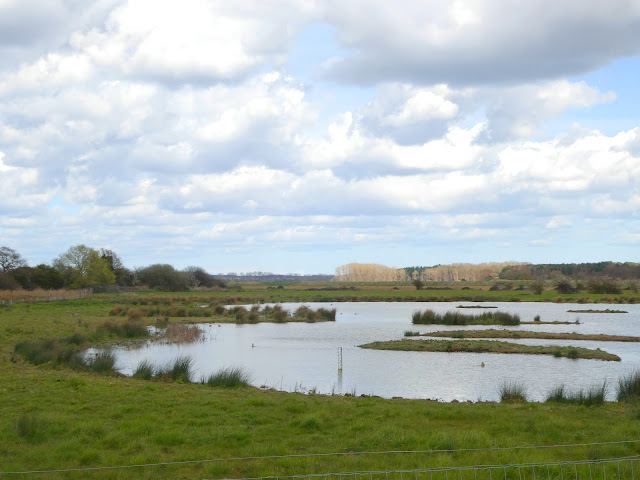 The area around Boyton Marshes is very varied, which means there are a number of different habitats within and around the reserve. I noted the following (and our total of 15 species of bird sightings, counted in about an hour in a casual kind of way): 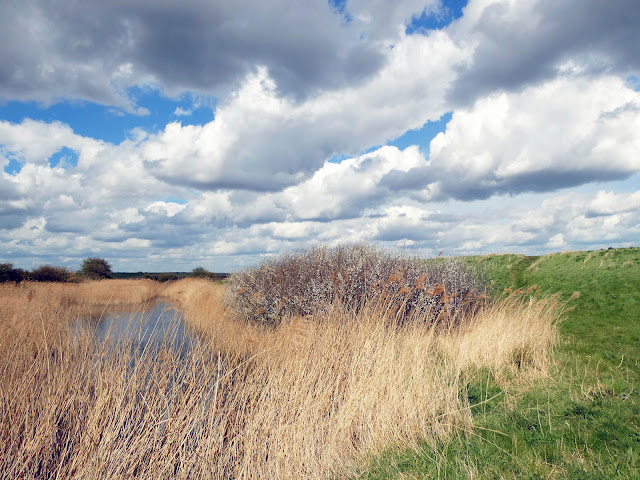 The photo above shows the grassy bank to the right. On the left you can see that there are reedbeds and a watercourse receding into the distance. Butley Creek, a tributary of the river Ore (as in Orford), can be seen from the top of the bank, as shown in the next photo. 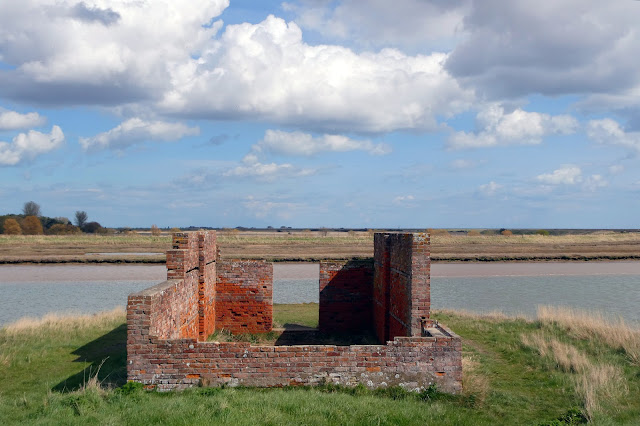 The ruined building above constitutes the scant remains of Boyton Dock. For a fairly short period in the mid-seventeenth century, substantial amounts of 'potter's clay' were loaded on to ships from this part of the estuary. Some of the clay was used in America and the Netherlands while some was used in the London Delftware industry. The mid-nineteenth century saw Boyton sending coprolite to Ipswich by barge for the manufacture of fertiliser. I spent a year of my life in Ipswich as a resident of Coprolite Street.

There are, in fact, several ruined buildings in this part of Boyton and its environs, many linked to defensive measures. The name 'Boyton' stems from 'Bay Town', the bay being nearby Hollesley. Boyton was one of the Suffolk locations picked for the filming of The Dig.

The photo below shows the view from the Dock, with some of the more distant ruins on the eerie spit of Orford Ness beyond the far bank (and over the water, which it hides). I felt a few hailstones on my face as this Marsh Harrier flew high above our heads ... 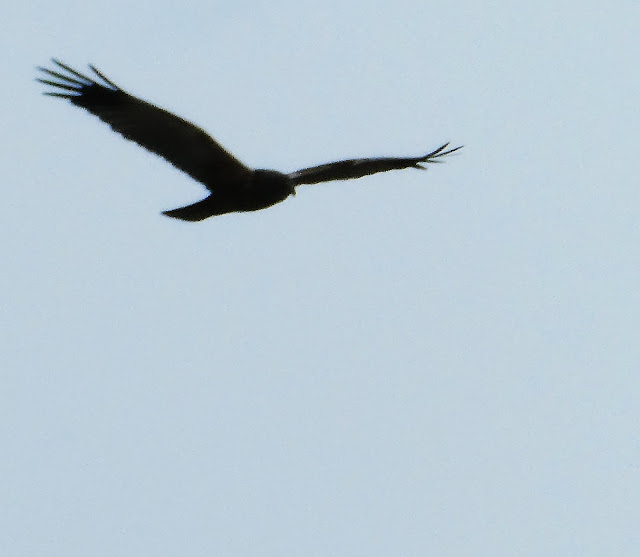 We took a final look at Havergate Island and turned for home.

What a great outing! Avocets are so very graceful and photogenic. Thanks for including all the information about the habitats and history - I love having the context.

Thank you, Wilma, Mark and Susan, for the kind comments.

What a lovely outing you had.
I enjoyed seeing all of your photographs.

How great! Such a lovely post and photos. All good wishes.