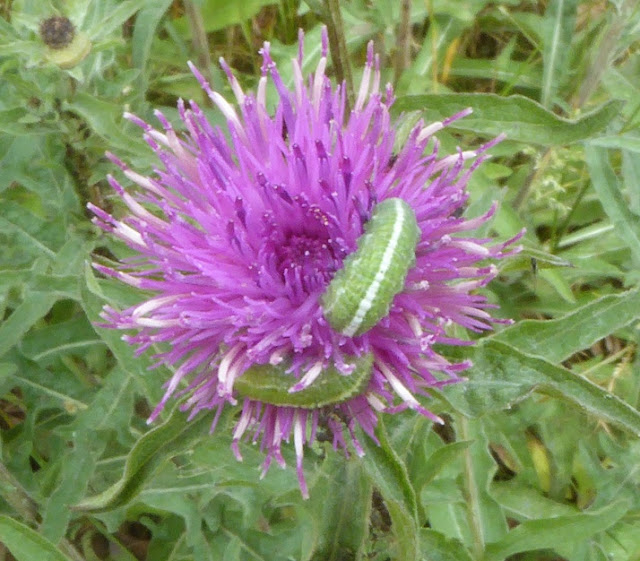 I seem to have been preoccupied with correspondence during the last 36 hours, so, with some reluctance, I will pass over Dr Miriam Darlington's tempting #30DaysWildCreativity meme offered today by her guest, Sarah Acton, though I would like to try it at some point.

Instead I have opted for this morning's discovery which follows on perfectly from yesterday's post about the new Knapweed plant in our wild garden...

I am pretty excited, particularly since they were not there yesterday, and I'm not entirely sure I know whose larvae they are (I had wondered Angle Shades since the moth had been in the area, but I am not sure the pictures match). I am in the process of trying to find out, but do leave a comment if you can help.

In yesterday's post I wrote about what insects the Knapweed might attract, little thinking that by this morning there would be at least four hungry mouths feeding on the plant. The weather has not been particularly bright or warm, but, as they say, what a difference a day makes...

Having guessed these were moth larvae, I am now wondering if they might be Hoverfly larvae. The reason is the photo in the pop-up window labelled 'Hoverfly larvae' on this UK Safari page. Other suggestions from kind folk on iSpot are both types of Orthosia; O. gracilis (Powdered Quaker) and O. gothica (Hebrew Character) and

Lovely to see these caterpillars! i don't know what they are, I wish i did recogise more caterpillars than I do!