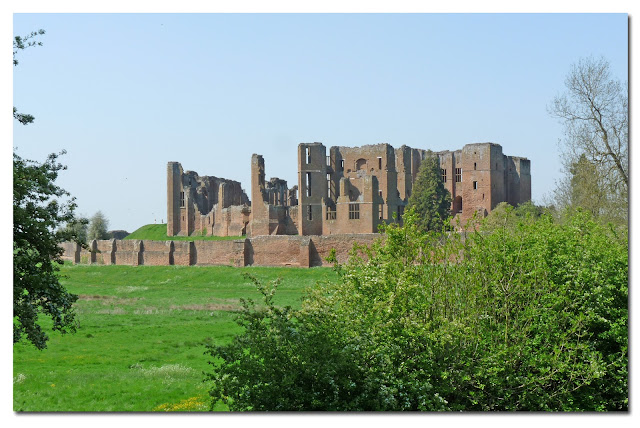 We visited Kenilworth Castle a couple of years ago when the reconstructed Elizabethan garden was almost in place but still under wraps, so we were keen to see how things had developed. 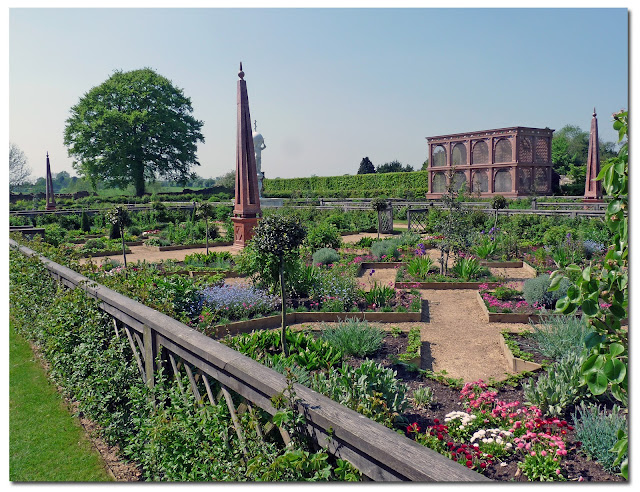 The flower gardens were looking beautiful and had been planted with flowers that would have been popular in the time of Queen Elizabeth I. Some of these, e.g. the strawberry flower and the rose, are depicted on Elizabethan needlework and had special meanings. Our eyes, however, were soon diverted from the flora and foliage by the activity of Ladybirds. 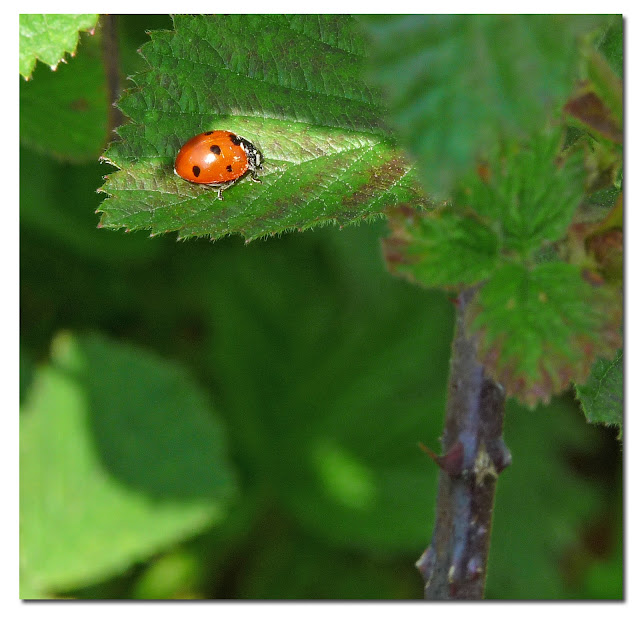 We counted one hundred and forty-nine 7-spot Ladybirds (Coccinella 7-punctata), like the one above. Some were on grass but many were scuttling about on roses, small evergreen shrubs and leaves. 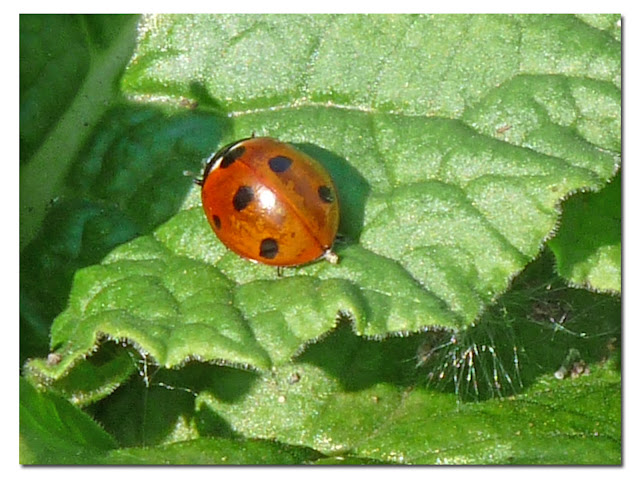 I wondered whether this one above was laying eggs, but I can't be sure. You can see a selection of pictures of Ladybird eggs here. 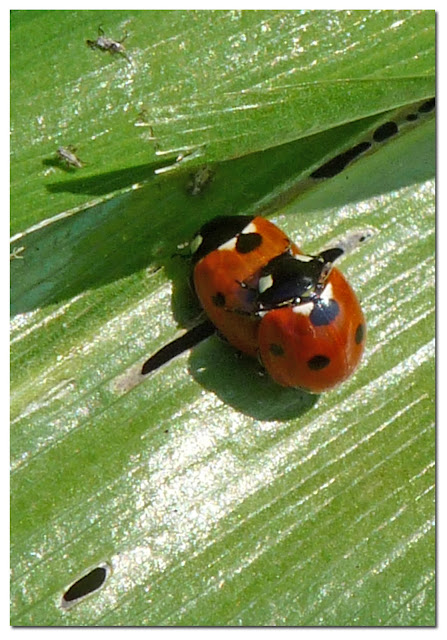 These 7-spots above appeared to be mating. 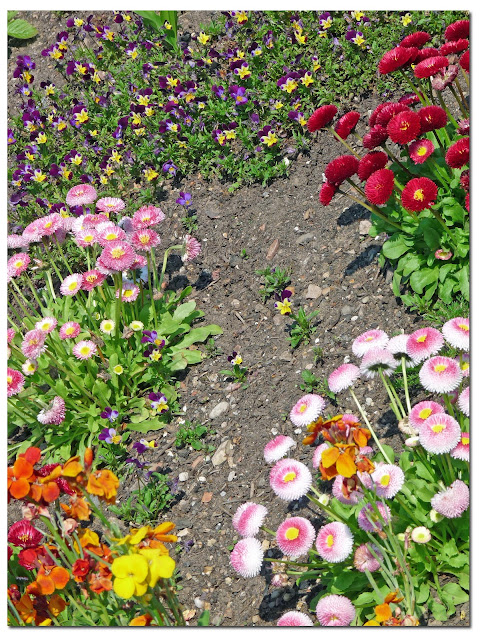 These were some of the flowers in the new garden, so there was plenty of choice when it came to Ladybird habitat. 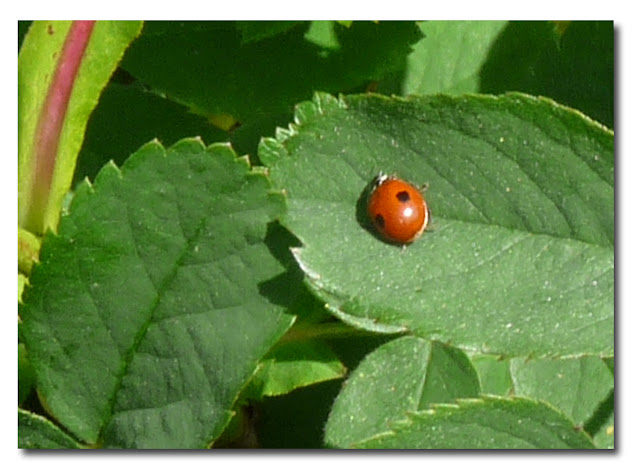 We saw five 2-spots (Adalia 2-punctata) like the one above, but some were too difficult to photograph easily as they were buried in between leaves. Some were extremely small and made me realise that a pair of glasses would have been helpful! 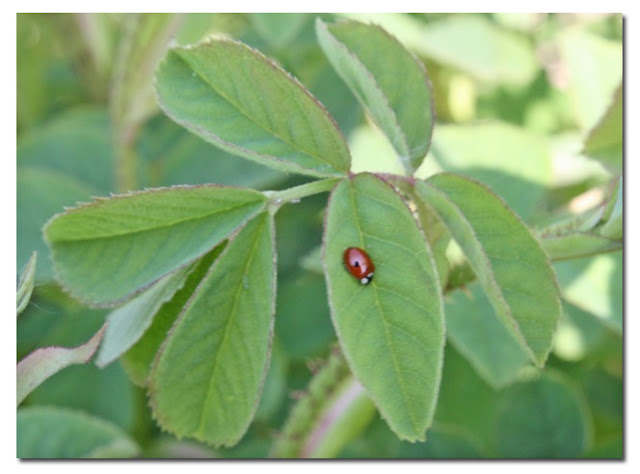 My thanks to David for taking the picture above of another 2-spot ... 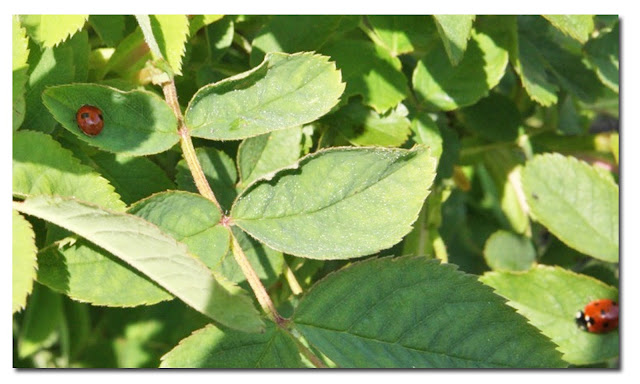 ... and another. As you can see, there is also a 7-spot in the lower right-hand corner of the photo. 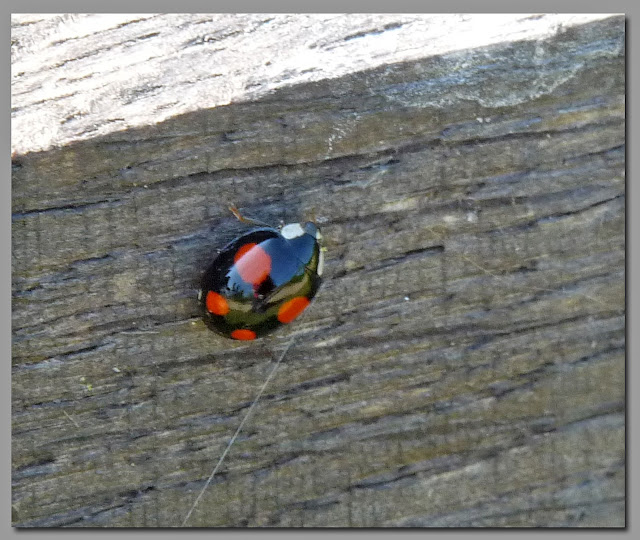 I noticed two Ladybirds like the one above. I wondered if they were Pine Ladybirds - or a melanic (black) form of the 2-spot (Adalia 2-punctata) since the markings were in the form of spots rather than commas - but I have it on good authority that they were 'one of the melanic forms of the Harlequin ladybird', like H. axyridis spectabilis. It was hard to tell with any sense of certainty whether these ladybirds had the telltale phlange around the base of the elytra that might have suggested an ID of Pine Ladybird. The one in the photo above was climbing along a wooden garden post. 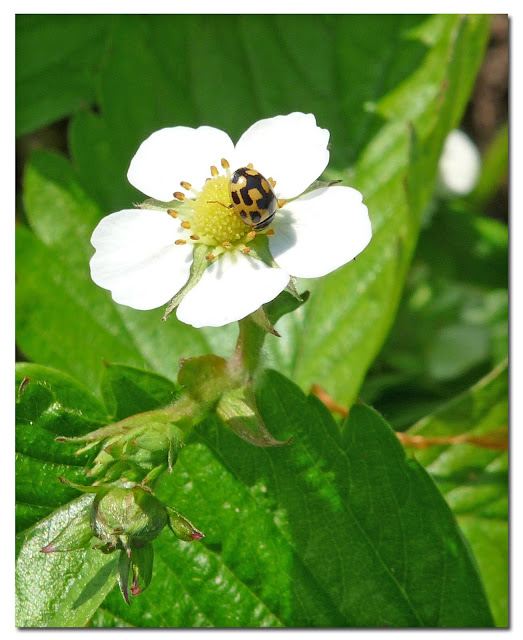 I encountered three 14-spot Ladybirds (Propylea 14-punctata) in the Elizabethan garden. They were small and pretty active, walking along leaves and over flowers ... and often disappearing just as I tried to click the shutter! 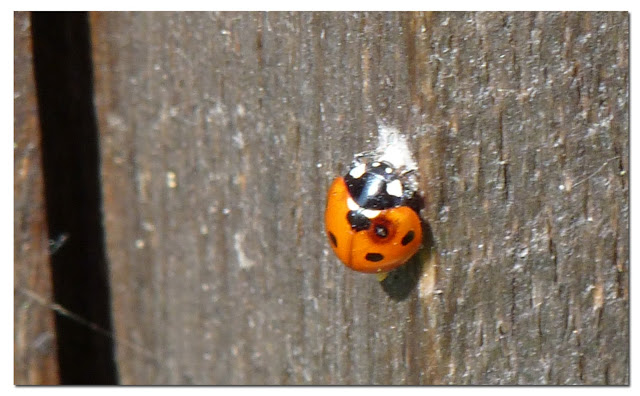 The seven-spot in the photograph above particularly caught my eye because it had what at first seemed to be an extra spot, the one with the 'halo' round it. I have no idea whether it is an extra spot or whether, perhaps, it could be an injury. I am wondering whether this ladybird was injected with an egg of the parasitic wasp, Dinocampus coccinellae. My reasons are as follows ...


I have no idea whether the ladybird in the photo above had fallen victim to attack, but the subject is a fascinating, if unpleasant, one. A large proportion of ladybirds who encounter the parasitic wasp in this way fail to survive. It is believed that some kind of 'brain-washing' may be involved, due to chemical processes, because it has been noted that the ladybird appears in some instances to show protective behaviour towards the alien larva.

Scientist, Jacques Brodeur of the Department of Biological Science at the University of Montreal in Canada, has been studying this phenomenon and the ways in which the 'host' ladybird is affected by such an invasion. Observations have appeared in the Royal Society journal, Biology Letters.

You might like to read more on the BBC site here or  on a series of excellent National Geographic pages, starting here. 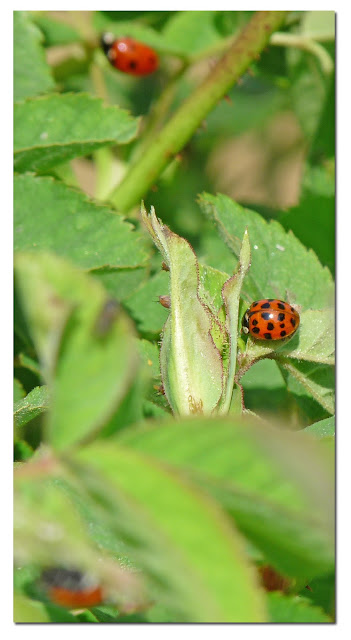 We also saw at least two (above and below) large multi-spotted ladybirds. I take these to be Harlequins (H. axyridis succinea). This was not good news for the native ladybirds.

As usual I shall be logging these Kenilworth sightings with the UK Ladybird Survey, and if you find ladybirds in the UK, I would encourage you to do the same. You can read about Dr Helen Roy and her ladybird work here. There was an excellent feature about it in The Times last weekend. 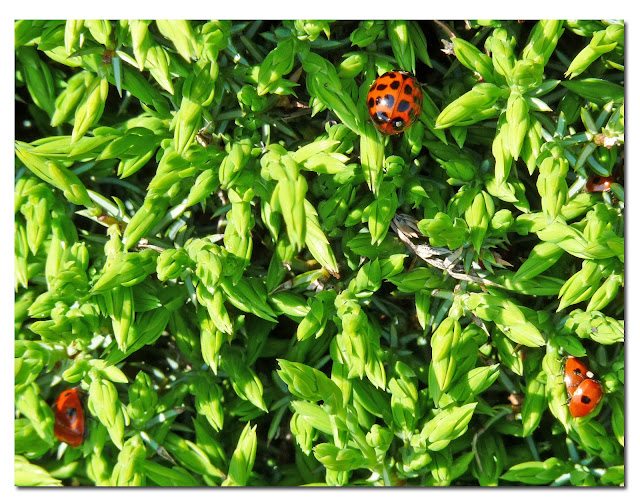 What a wonderful post about Kenilworth Castle's Elizabethan garden. I so enjoyed seeing all your photos and thanks so much again for sending the link - please accept my apologies for only just seeing and responding to your very kind email. Now we are members I will be returning when the weather is better and there are some flowers to see there :)

Love all the Ladybird photos - you saw so many. It was fascinating to read about the one that may have been parasitised as I had no idea that this happened to Ladybirds. Off to check out your other blog now and huge thanks (and apologies!) again.

Thank you, RR, so much for your comment. I hope the ladybirds will all be there when you visit in the summer!