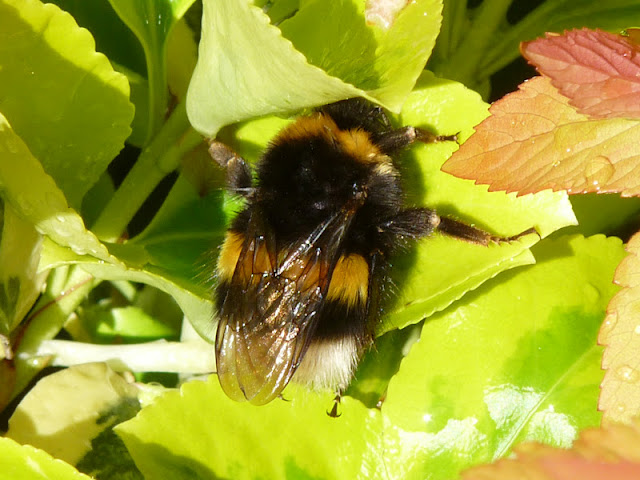 I found this sluggish bee in my garden back on 17 April, and it has been puzzling me ever since. I had a hunch that it was a queen, but something about it made me think it was a bit different to the other Buff-tailed Bumbles I had been watching.

I began to think that it was perhaps a Cuckoo Bumblebee, Bombus bohemicus, and visited Stuart's Donegal Wildlife blog for assistance. However, I now have my doubts for various reasons. You can't see the back legs in my photo, and I don't know whether the honey coloured parts in the front legs are signs of pollen. 'My' bee has a central golden band ... so perhaps it is just another Buff-tailed Bumblebee after all.

Now that I have been alerted to the existence of the Cuckoo Bumble, I will be on the look-out for these wily creatures. Do let me know if you can give me an ID for the creature in my photo!

Wonderful capture! I'm afraid I don't know much about bees. The ones visiting my blooms are carpenter bees and the blue-banded bees.

I live on the wrong continent to know this guy but he does remind me of some of ours. I have never noticed the buff color on the tail but I will research ours to see our exact coloring. It is a great photo and fun to research it.

Thank you for your comments!