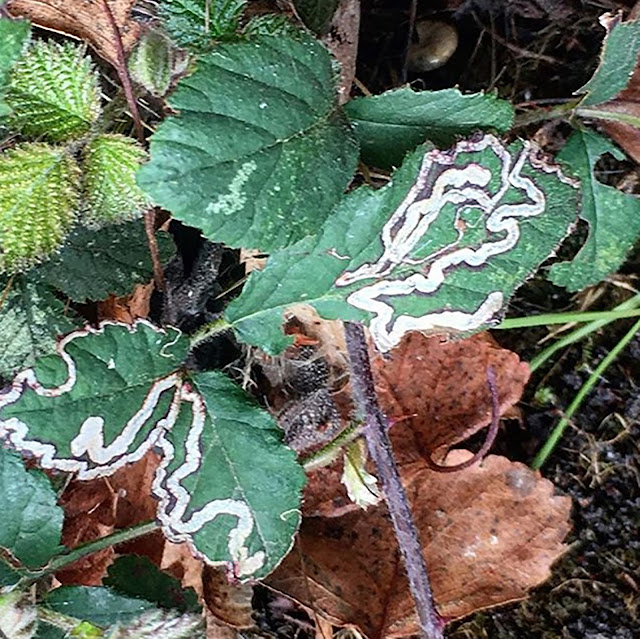 There has been much media coverage today for the school strike by young people against climate change. I have been thinking back to those balmy, if 'unnatural', February days when sightings of early butterflies graced the pages of @twitter, and I began to wish that I had a 2019 butterfly photo of my own to share. We visited NT Wicken Fen, a renowned site for biodiversity, but any lurking butterflies eluded me.

Since then we have been battered by Storm Gareth, which comes and goes in pulses, bearing a chill wind in its wake at times. What, I wonder, has become of those early butterflies?

I checked the garden this morning for signs of a return to spring, and found a 7-spot Ladybird but few other signs of insect life. I was about to come indoors when a rather scruffy bramble caught my attention, and I noticed the leaf-miner trail in the photo above. I knew virtually nothing about the creatures who make these so it seemed a good moment to learn (so please let me know if any of the text that follows needs a tweak!).

I discovered that these insects are larvae, a thought that had not previously crossed my mind. Furthermore, it turns out that these ones are lepidopteran larvae. OK, so there are no bright-winged butterflies for me to photograph and enjoy this morning, but there is the excitement of discovering that the small miners who leave a corridor-trail (known, it seems as a 'gallery', patterned with 'frass') will become moths, probably Stigmella aurella (and here for Suffolk sightings) or a similar Stigmella species.

The adult moth, while not without a certain charm, is not the most exciting creature in terms of appearance. The wingspan of this species of Nepticulidae is less than a centimetre. The fact that these insects are part of the Nepticulidae family indicates that they have eye-caps over their eyes. We quite often see Mint Moths in our garden, but I cannot recall seeing a leaf mine moth, such as the Golden Pigmy, when they are on the wing in May. Photos of the larval stage can be seen here.

Those of you who follow my blog may know that I like to contribute data to insect recording surveys. I see there is a rather comprehensive Leaf-miner Moth Recording scheme here.

Many of my UK readers will be aware that Butterfly Conservation have just launched a new awareness initiative in the face of a serious decline called #MothsMatter. It seeks to show us why moths matter as pollinators and as an important element in the food chain. Many of us admire these insects for their variety and beauty.

Here at home we have a dedicated wildlife patch in our garden. We also have a few self-seeded Buddleia butterfly-bushes (including one growing up through out tarmac drive!). I have three insect hotels. There is a ready supply of water, and while a slab by the french window may not be the ideal space for a bramble, I see no reason why the larvae should be disturbed.

I had a couple of moths on the outside of my window last night: here's to a summer ahead of knowledge, wonder, conservation ... and moths.
Posted by Caroline Gill at 13:42

Very interesting post Caroline. Moths are fascinating creatures and the Moths Matters campaign is much needed

Yes,I have that going on in my own garden and now you have confirmed my suspicions!

Hi Caroline, I blogged about the Moths Matter campaign today and linked to this post! You can read my post here https://craftygreenpoet.blogspot.com/2019/03/moths-matter.html