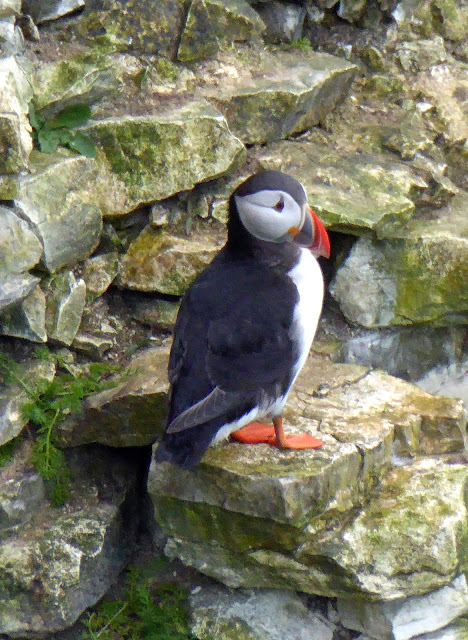 I have been wanting to post these Puffin pictures for days, but I recently switched to Lightroom as a photo storage system and it is taking me a while, particularly with more than one or two images, to become adept at exporting and so on. I really like the way Lightroom displays, and I feel sure that the procedures will soon become second nature (but you didn't hear me say that) ...

So here at last are a few Puffins!

Our days out on the cliffs were during that bitterly cold snap. We had pelting rain, howling gales ... and just occasionally a sunny moment. I feel sure that my photos would have been better if the light had been on our side. But Puffins are Puffins, and they are always a joy to watch. It was a good opportunity, too, to visit the re-vamped RSPB Seabird Centre. 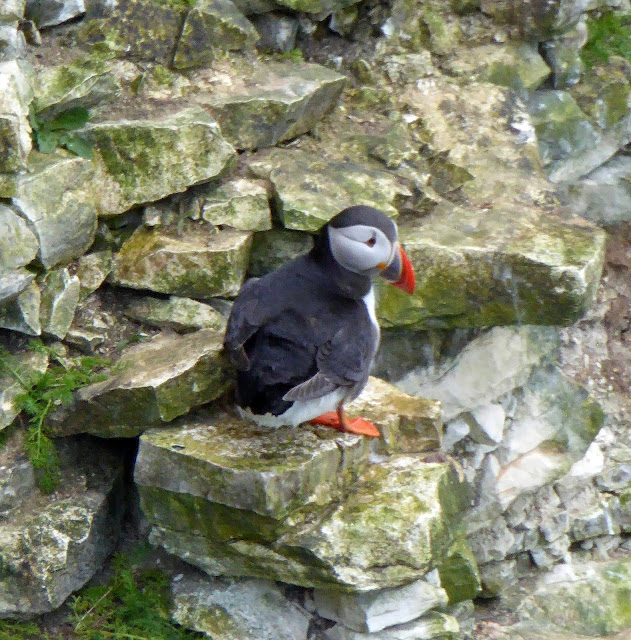 Our first visit on this occasion was in especially unfavourable conditions. My hands have not felt so cold since I was on the outside balcony at the top of the Empire State Building in January some years ago. The Puffins were not showing well (who can blame them), but this one little chap more than made up for any discomfort. 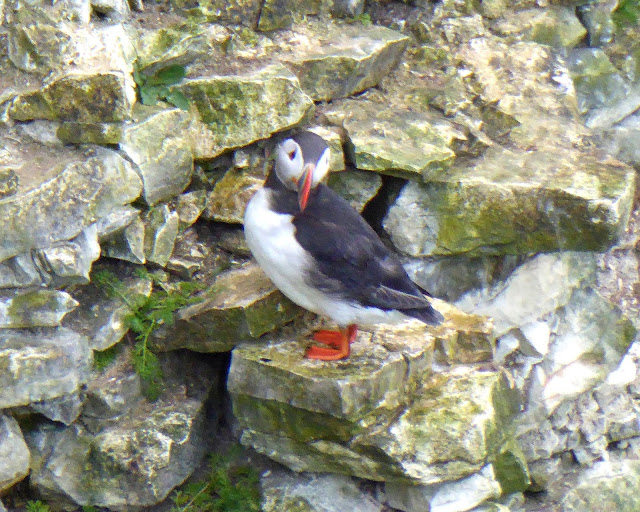 The Puffin may have been busy with some pre-mating grooming ... 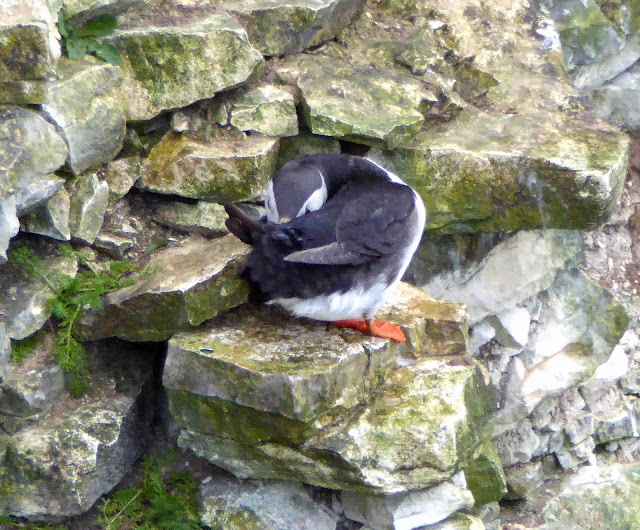 ... or was perhaps busy fluffing up the feathers, having only recently arrived off the ocean. 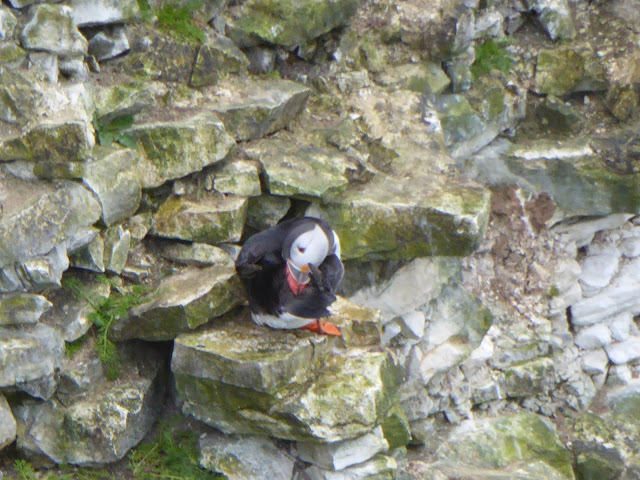 You can see from the photo below that the sea was a steely grey, but the perfect backdrop for a rainbow. 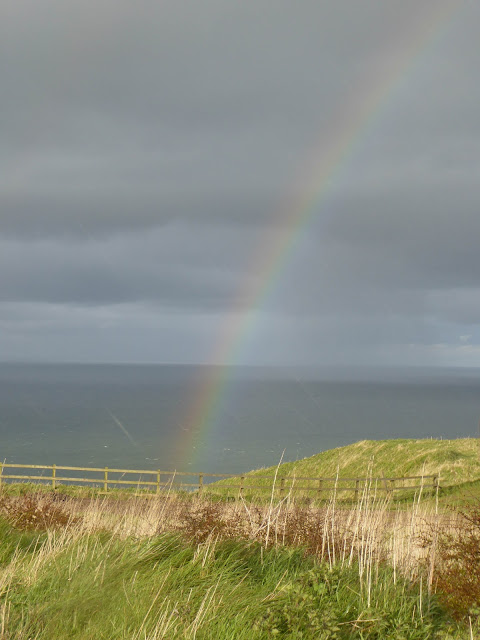 On our second visit the weather was a bit kinder, though I was still wearing two coats, a scarf, hat and hoodie. There were more Puffins about. The one below was peering down on the neighbouring Razorbills. 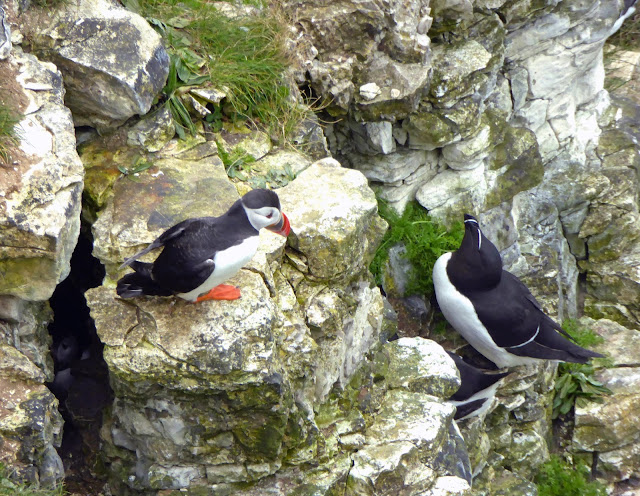 The photo below shows the distinctive orange-yellow spot on the cheek. If you click this link, you will see how it moves. 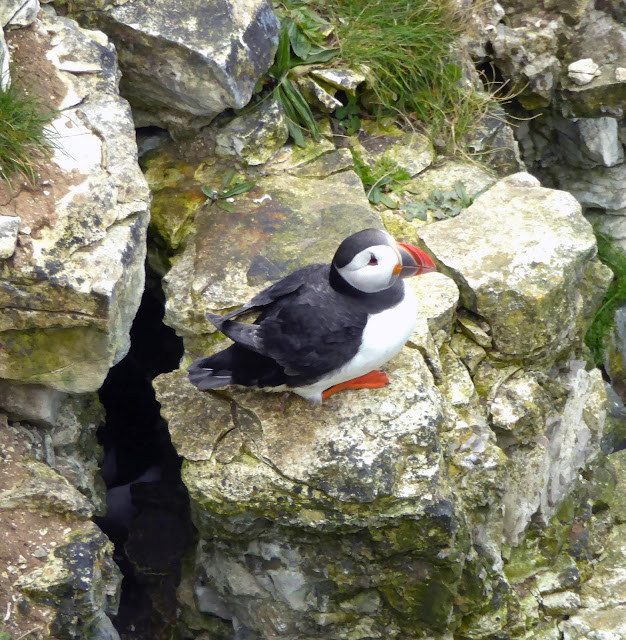 The coast, as you can see, were awash with seabirds. I will post more photos of the Puffins' neighbours in the days to come. 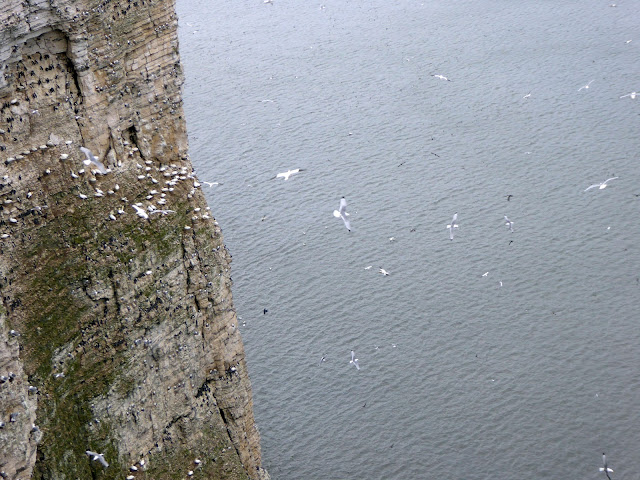 I just love those orange feet! 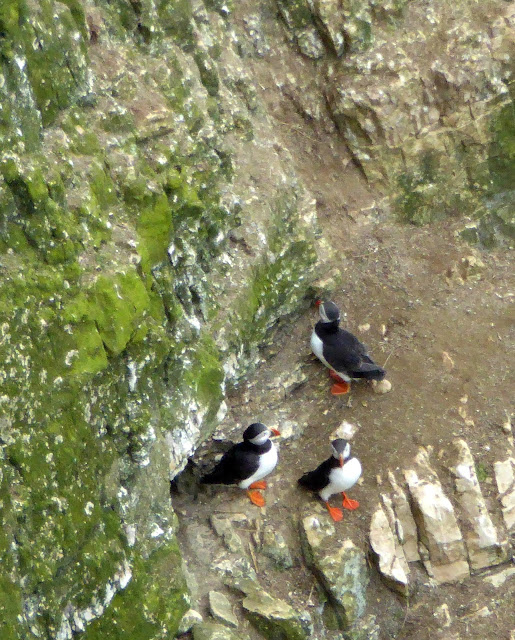 A pair of Razorbills strutted along the steep cliff ledge path to inspect ... 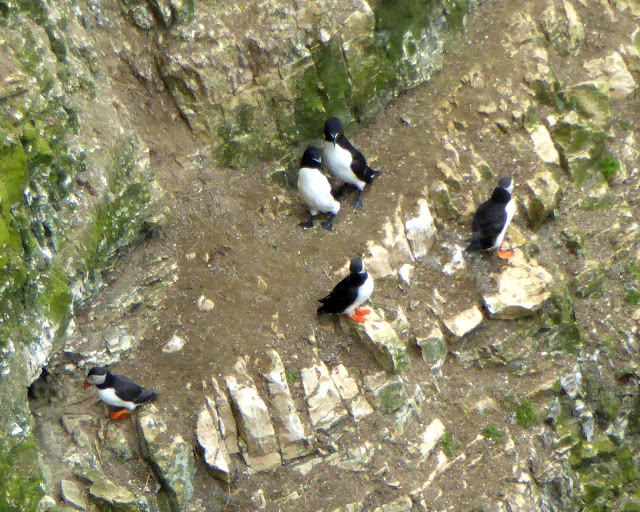 ... and a Puffin perched precariously near the edge to look down. 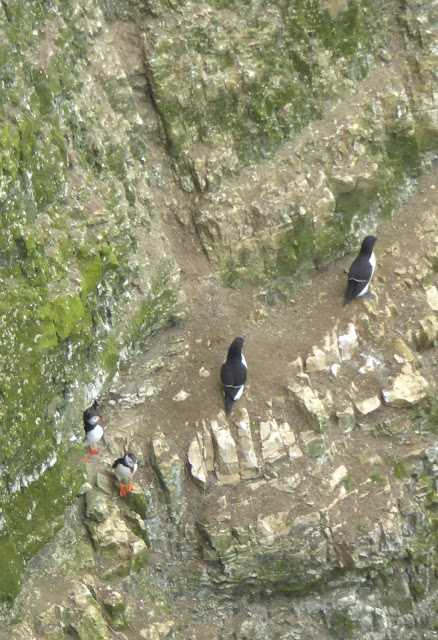 Puffin, Kittiwake and Razorbill all seemed quite at ease with one another. 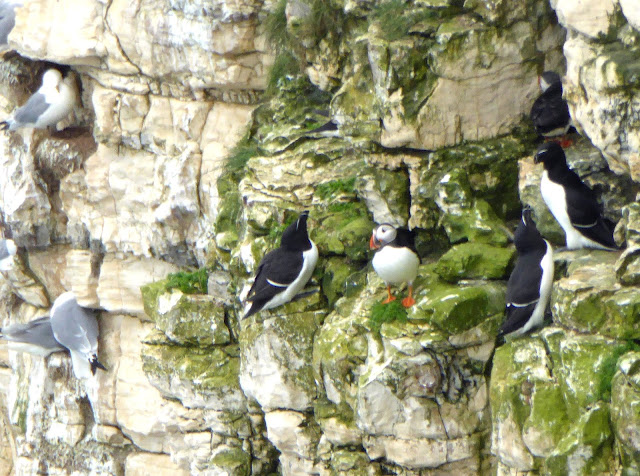 I asked David to pose on one of the new viewing platforms. Isn't Mosey Downgate a brilliant name? 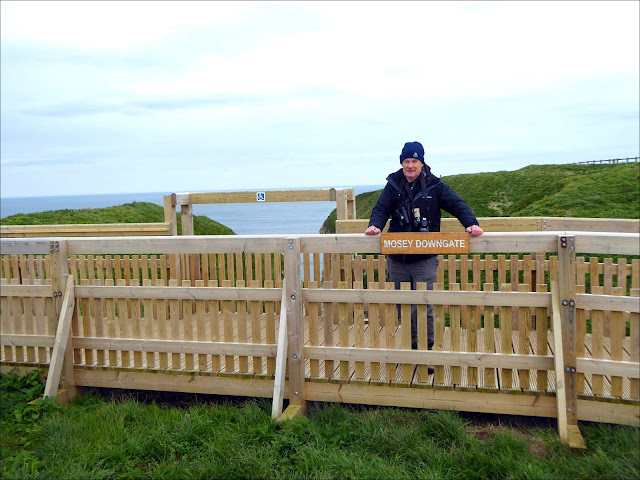 I hope the photo below gives you some idea of the sheer size of the cliffs. 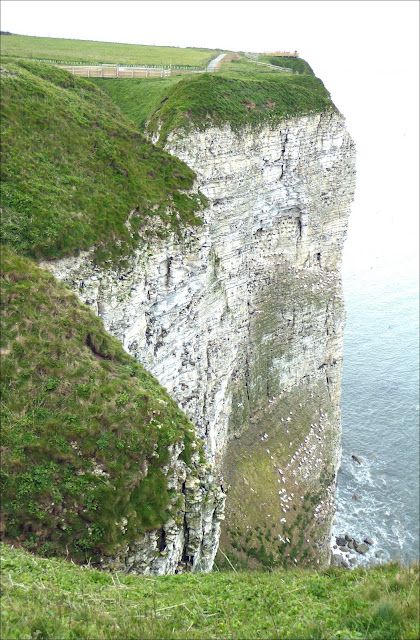 A visit to RSPB Bempton Cliffs is always a most enjoyable experience. It is also an educational one.

The viewing platforms mean that you can watch the birds safely from a distance, without causing a disturbance. This is particularly important since threatened species such as the Puffins and the other seabirds arrive for the breeding season. The RSPB website includes helpful information on the subject of nesting birds. A local MP, Kevin Hollinrake, has become a Species Champion for the Puffin. You can read about his conservation publicity role here.

The Bempton staff often have scopes positioned on the cliff ledges to enhance bird-watching activity: zoom lenses are very helpful, and I often found that I had a better view through my camera than my binoculars.

The RSPB staff and volunteers are often on hand to point out the Puffins (which, despite their 'hi-vis' features) can be surprisingly difficult to spot. There were several amusing and informative signs like the one below along the cliff. 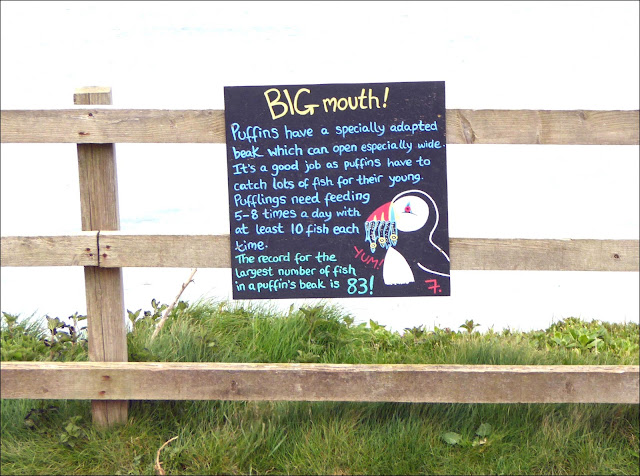 No surprises here, but I came away convinced that Puffins are my favourite bird! 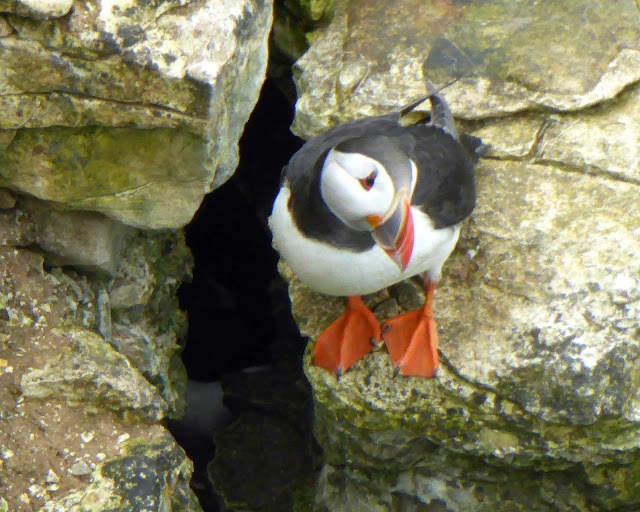 My poem, 'Penmon Priory', has just been published in the 2016 ekphrastic eBook produced by Lidia Chiarelli and Huguette Bertrand for the international Immagine e Poesia Movement. The poem, largely about the priory on the Isle of Anglesey (off North Wales), also concerns Puffin Island, an islet off Anglesey, on which 2000 breeding pairs of Puffins were recorded at one point in the past. My poem has been paired with artwork by Jongo Park from South Korea. The eBook is free and can be downloaded from this link.
Posted by Caroline Gill at 16:16

Such strange and curious looking birds. Would be easy to spend hours watching them. You got some great shots of them!