Post for 'I and the Bird' Blog Carnival: Northern Gannets

I have occasionally participated in these I and the Bird blog carnivals, and have always found them an excellent way of learning something new about a topic I already knew a little about. Blog carnivals offer the opportunity of visiting different blogs to see the most wonderful photographs on a given subject. Do follow the links to see who else has been taking part. The Carnival was delayed, but is now up and running here ...

On this occasion the folk behind I and the Bird put out a call for posts about Sulids, a group of birds including the Booby (which sadly we do not have in the UK) and the Gannet (which can be seen here in the UK in coastal areas and on offshore islands).

I hope you you will enjoy my photos. Do check out the links listed here - and please leave me a message in the Comments section if you would like to do so!

So where do I enjoy watching Gannets (my shorthand from now on for Northern Gannets)?

Well, I have often seen them off the Scottish coast, particularly around the beautiful Inner Hebridean island of Skye, but the site I have visited most often is a reserve run by the RSPB called Bempton Cliffs, on the Yorkshire coast in the north-east of England. This is the only mainland colony.

The coastline at Bempton Cliffs is steep and craggy. However, there is pretty good access to the viewing points via a series of pathways, which means that this site is a popular one, even with those who have certain mobility restrictions.

Look at these sociable birds! The top two are perching on their adjacent nests. 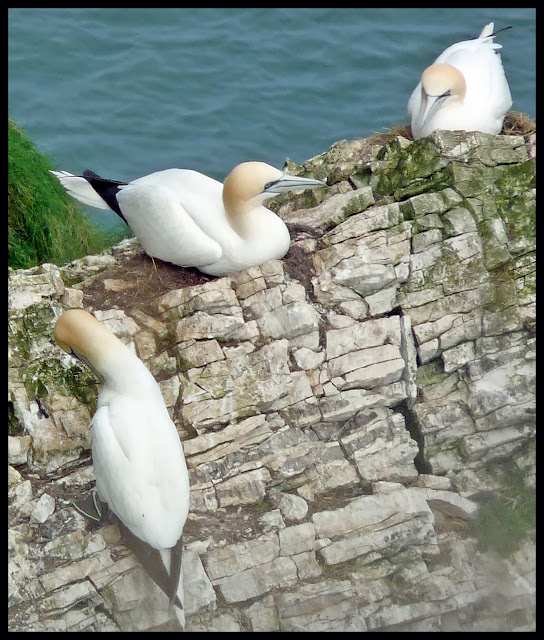 And here (below) you can begin to appreciate the precarious nature of the cliff-face. The diagonal supporting rock looks particularly unstable ... 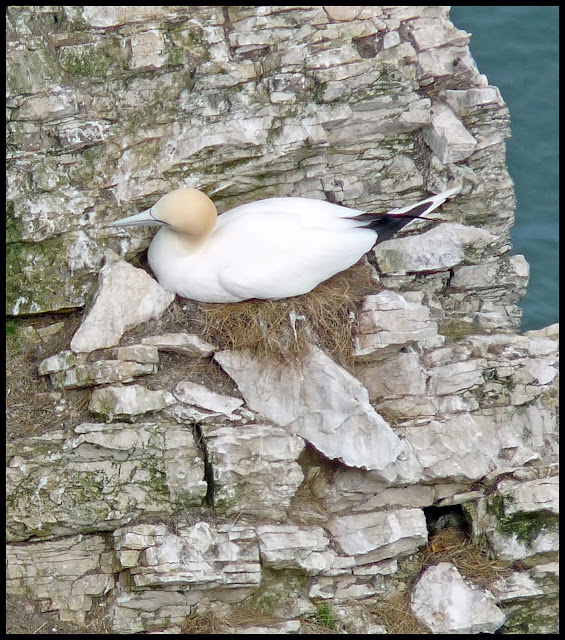 The photo below shows the majestic line of these cliffs on a sunny day. You can see a couple of gannets in flight out to the right ... 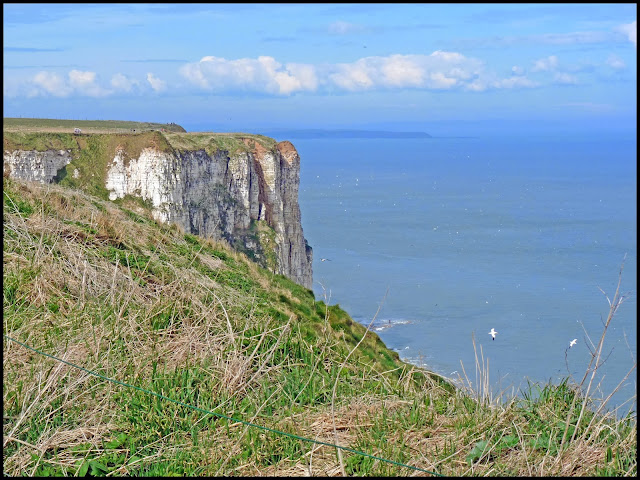 ... and here (below) are more Gannets on the wing. 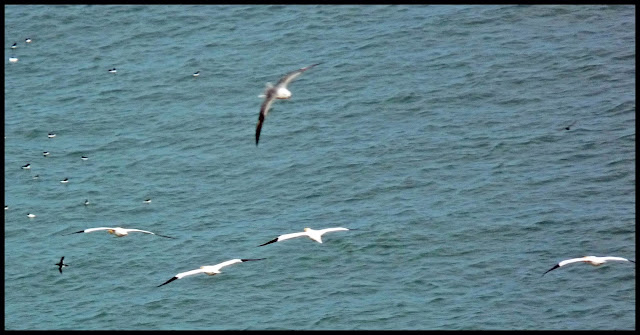 There are sites around the UK where you might spot the occasional Gannet, but RSPB Bempton Cliffs is not one of these! You can see one of the rocks used by the colony in the photo below ... 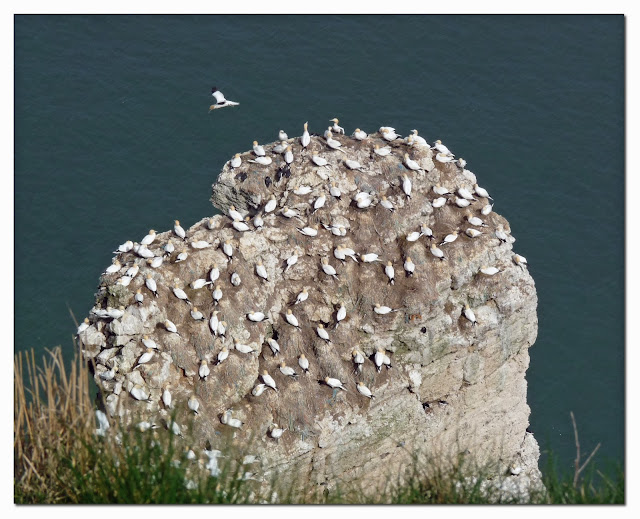 There is usually one bird flying out ... 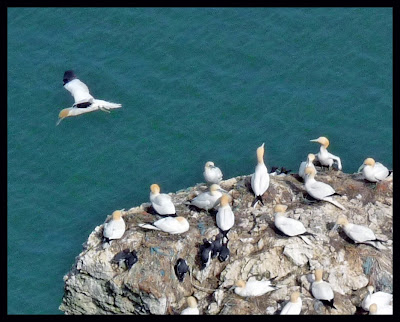 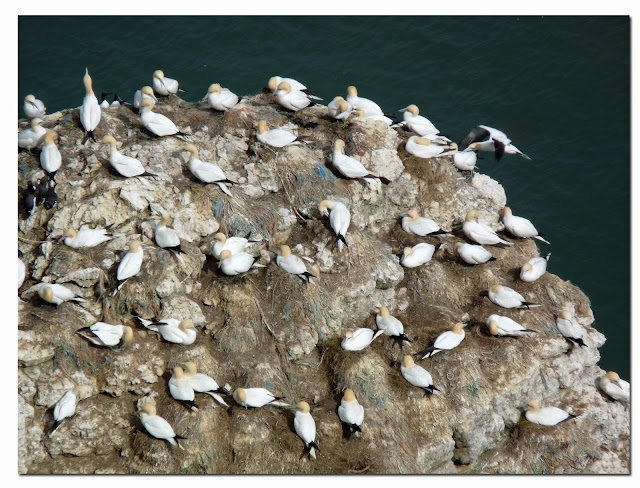 I'm not sure what has caused the streaks of blue on the cliff, but you sometimes see bits of coloured twine or netting incorporated into the nests. 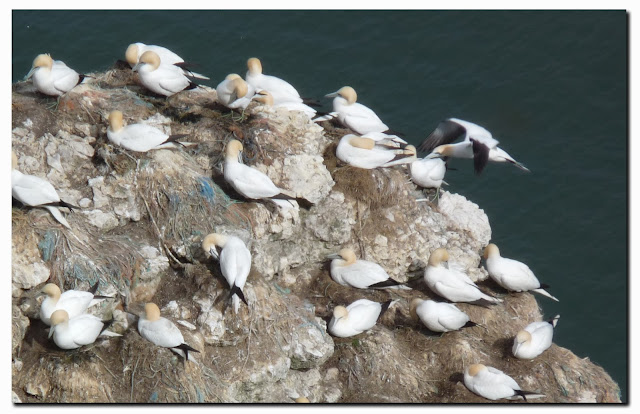 The photograph below shows a Guillemot preparing to touch down. The Bempton Gannets share the cliffs with Guillemots, Fulmars, Kittiwakes, Razorbills ... and Puffins. 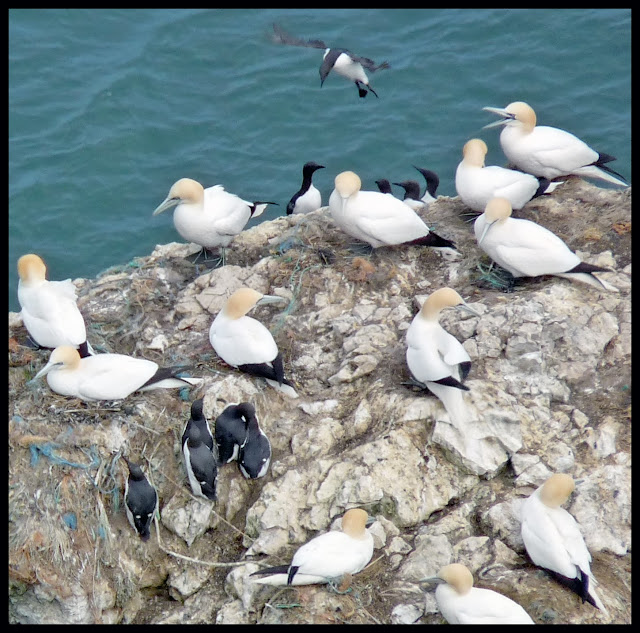 It is not surprising on account of the size of the colony that there are occasional lively exchanges, squabbles and spats! 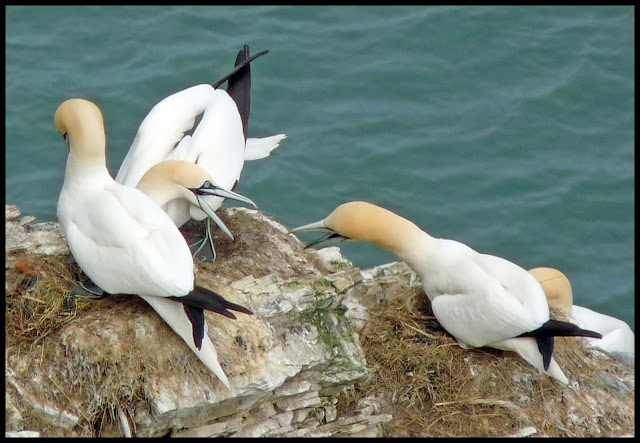 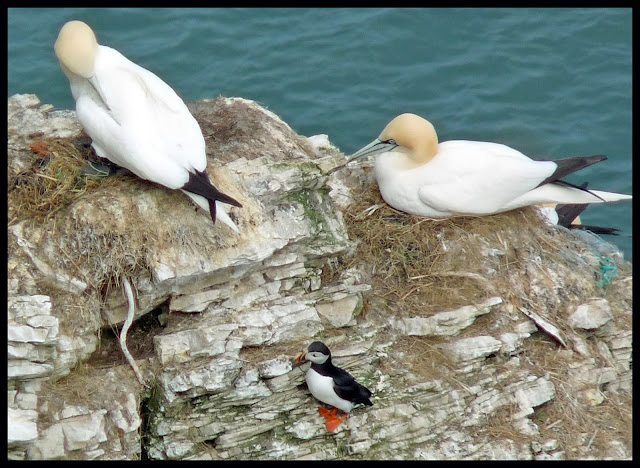 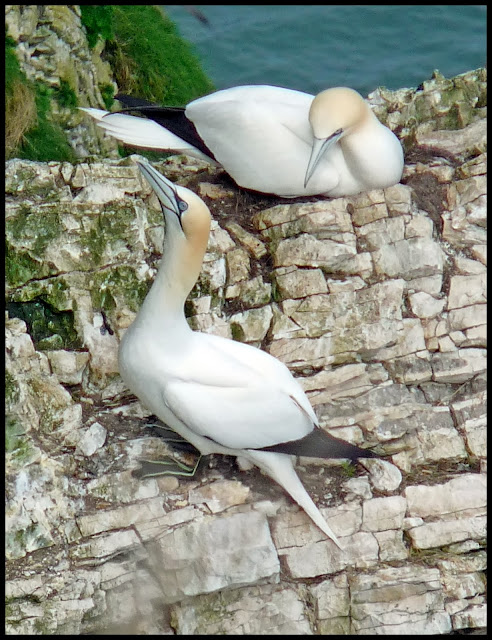 The photo below shows the wings. The Gannet's wingspan is up to 2 metres. 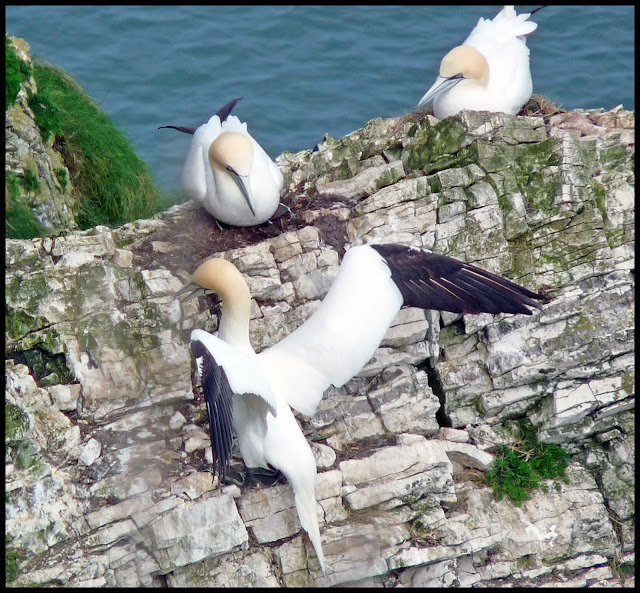 The birds in the photo below are just three of the 200,000+ nesting seabirds who make their home in these cliffs from April - September. 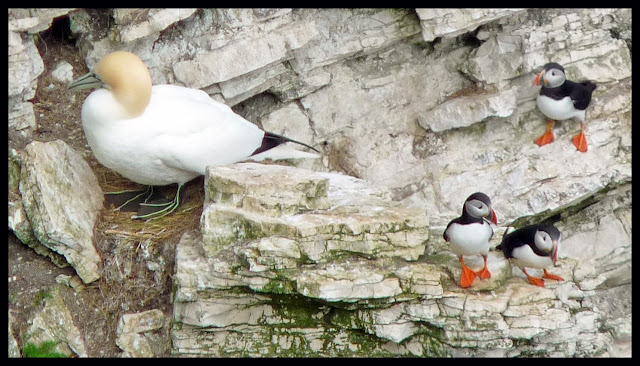 Sadly the Bempton Puffin colony has been affected by adverse weather conditions, diminishing supplies of sand-eels and other factors. Scores of Puffins were lost earlier this year on the Yorkshire coast in what has been described as one of the worst Puffin disasters for almost half a century. The eventual return of the birds was celebrated with special cappuffinccino drinks that went on sale in 30 local outlets. 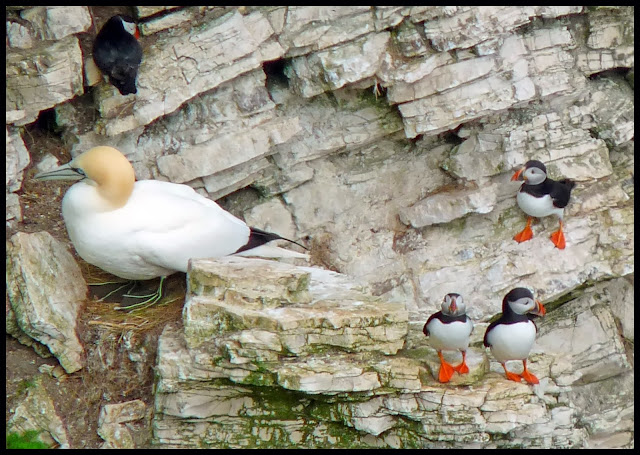 Late spring is a busy time on the cliffs, with Gannets nesting and Puffins seeking out their cliff burrows, which they line with strands of long grass. 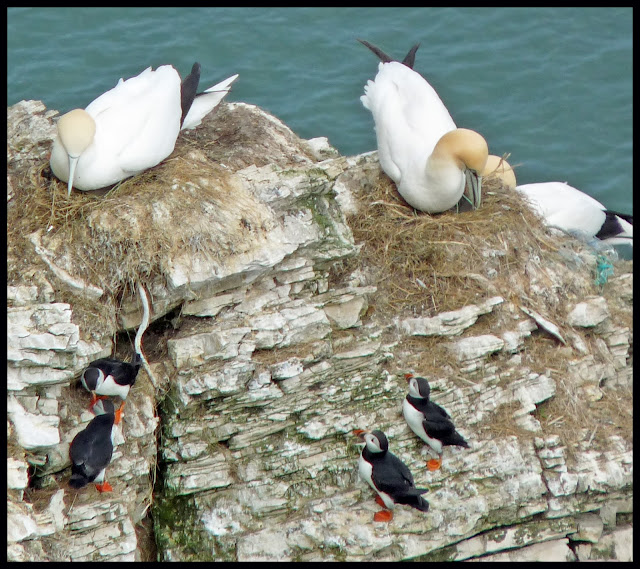 Here I am on the cliff at one of the five Viewing Stations ... 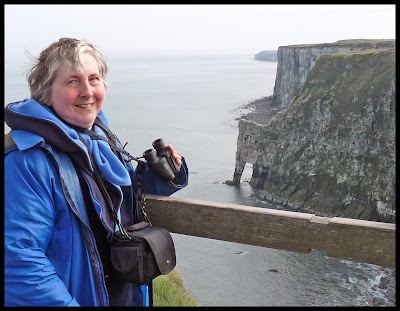 ... preparing to take a look at the variety of seabirds on this stunning bit of coast. 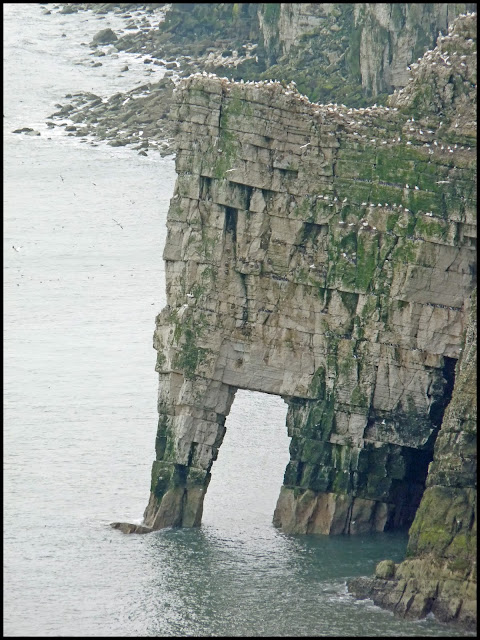 Gannets comprise the genus Morus, in the family Sulidae. 70% of Northern Gannets breed around our British shores. 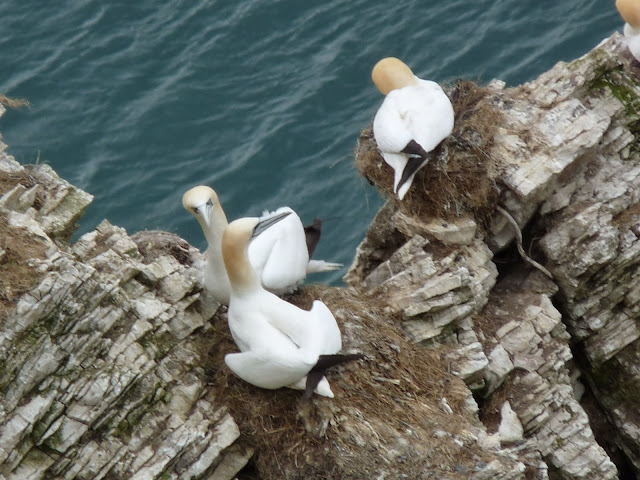 They feed on mackerel and herring by plunge-diving from great heights of up to 40 metres. I love the pale blue eyes, surrounded by bare, black skin, which make this bird so distinctive! 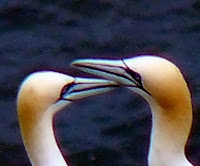 What stunning pictures Caroline. That subtle colour on their heads is so beautiful.

Amazing photos, giving us a real insight into their lives!

Wow, what a great post! I enjoyed all the photos. The cliff and birds are a wonderful sight! Thanks for sharing your experience!