Welcome to my Tree Following post for June and early July 2016.

Even in the bluest noonday of July,
There could not run the smallest breath of wind...

So here we are, past the longest day - and already the evenings are beginning to draw in ... just a little. The following is an update on my list of wild things seen in, on or around my two trees.

The tiny cherry tree has finished flowering. A lot of foliage has grown up round it, so I continue to wonder whether we should attempt to move it before the winter sets in. Some insect has been nibbling the leaves.

I was away for part of this last month, which is probably why there are less sightings than I might have expected at this time of year. A number of my #gbb16 Bioblitz records from last month have been verified on iSpot and iRecord and added to my list below.

I saw my first dragonfly in the garden of 2016 a few days ago, but it flew off before I could get close enough to attempt an ID. The cockchafer beetles - I always assumed they were bugs - have been flying busily around the silver birch on mild(er!) evenings, but the most exciting visitor this last month has been the hedgehog. The photo below actually shows one we saw last year as the camera failed to flash when David tried to take a picture of the 2016 hedgehog visitor last night. 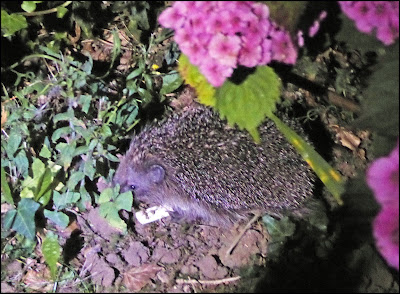 The Silver Birch is full of sap, which is presumably what is attracting the Cockchafers. Apparently the larvae can damage the roots of trees, so perhaps we should not be so excited by their annual appearance! Here's one who came in through the french window and landed on the carpet. 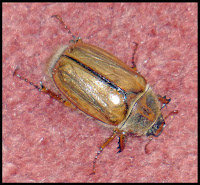 Avian sightings seen at any time since I began the Tree Following project are shown in pink.

I wonder what the next few days will bring ...

What a wonderful variety of wildlife you have - I especially like the comma - I haven't seen one for years.
Thanks for following your trees :)