Sand Wasps, Digger Wasps, the Ant-lion and the Bee-wolf

Suffolk boasts a number of sandy heathland and sand dune habitats. The photos below were taken at NT Sutton Hoo, above the river Deben near Woodbridge and at RSPB Minsmere on the Suffolk coast. The mounds at Sutton Hoo rise prominently above the skyline, but there are also a number of tiny mounds in the area that you could easily miss. These belong to a variety of burrowing insects including digger wasps.

The sandy soil around Minsmere and the adjoining heath above Dunwich is home to the Ant-lion and the Bee-wolf. Adult Ant-lions are not exactly spectacular: they look a bit like dull grey damselflies and are not often seen during the best hours of daylight, preferring the evening for their excursions on the wing. The larvae are the ones responsible for the name since they have soft bodies covered in bristles: they also have huge appetites for ants. They live in sandy pits, which they create and in which they sometimes play host to parasitic insects.

The Bee-wolf, on the other hand, is actually a solitary digger wasp. This insect preys on the worker Honey bee, but since the Bee-wolf needs a very particular habitat, I wonder how much of a threat it poses to the Honey bee population. It looks like a large wasp, but with rather short thick antennae.

My first photo (immediately below) was taken at Sutton Hoo in sandy soil. I do not have an exact ID for the insect to date, but I am pretty certain that it is a species of Digger Wasp ... 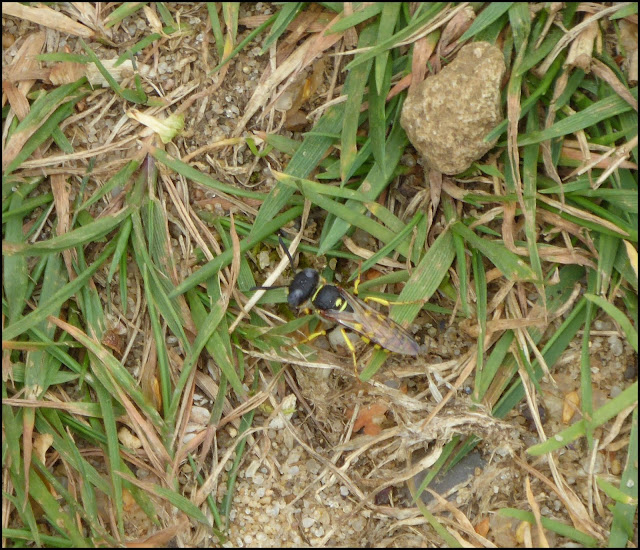 ... for here it is doing what Digger Wasps do best. 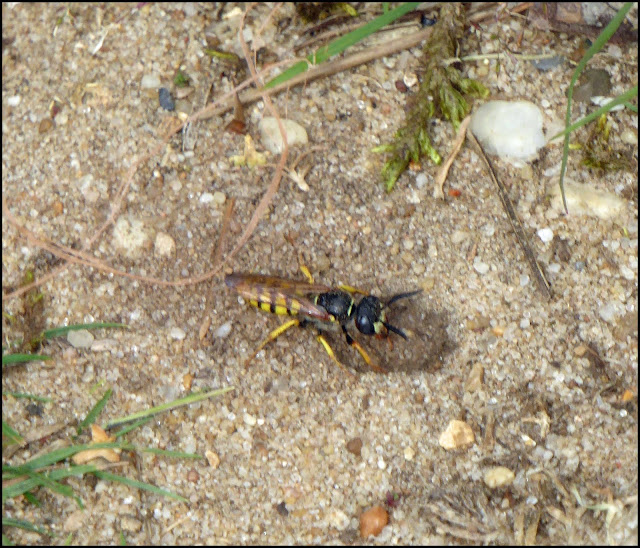 The photo below shows ... a head in a hole. No prizes for guessing that! 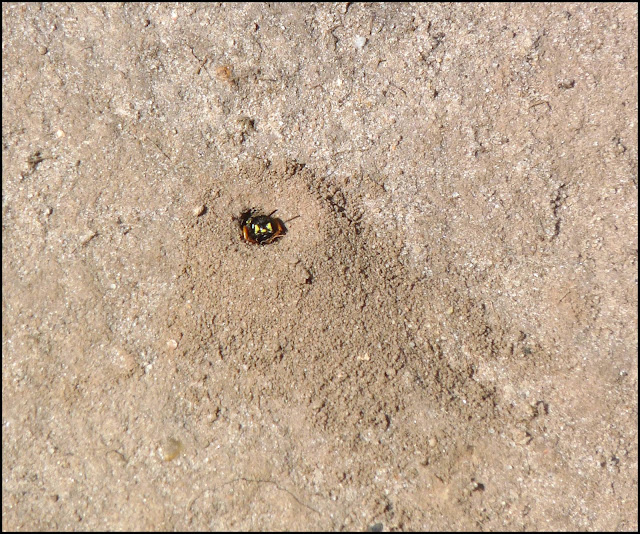 The next photo was taken on the reserve at RSPB Minsmere along the sandy edge of the path that leads towards the sea from the Visitors' Centre. 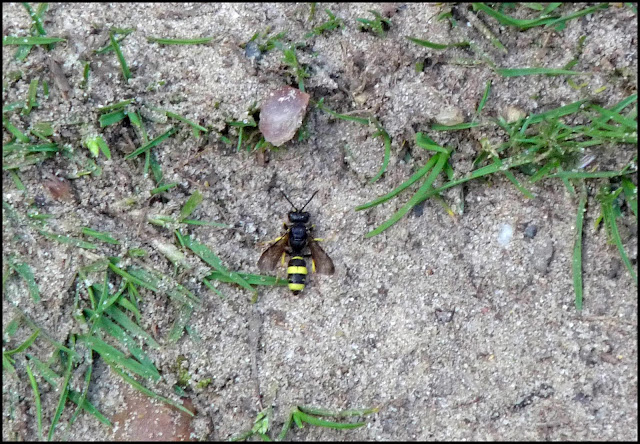 Here we are back at NT Sutton Hoo again, where the brown insect - a weevil perhaps, possibly a larva of some sort - is climbing up the sandy wall of a large Digger Wasp/Sand Wasp hole. I am wondering if there is another insect slightly above it to the right in the hole within the hole. There was a lot of insect activity in the area. 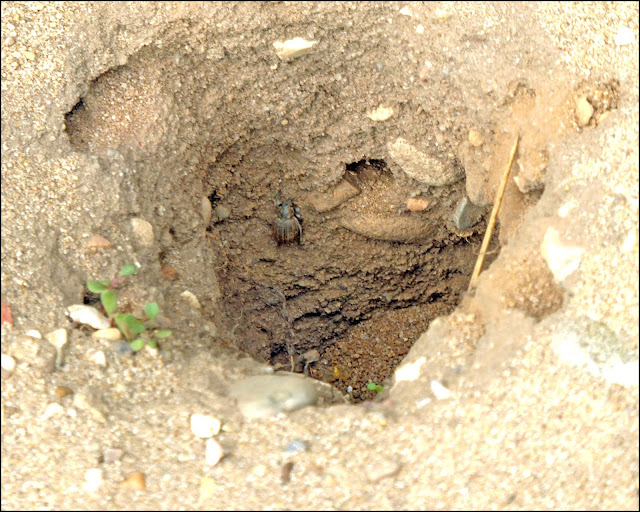 The following picture is of the same hole, and shows a wasp peering out of a crevice. 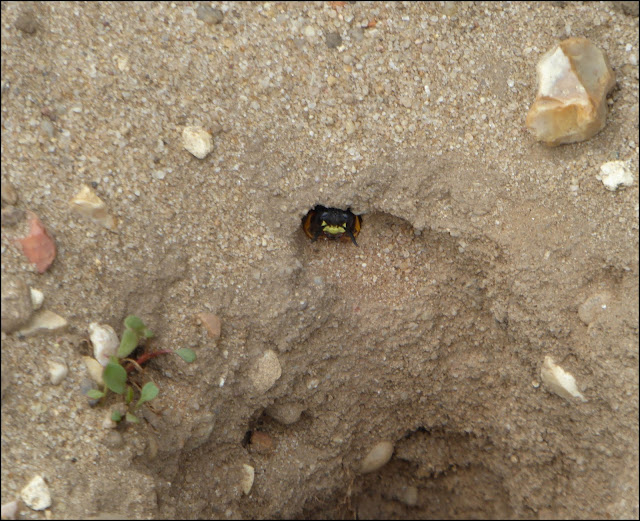 The hole below was about a couple of metres away from the large one above. This time you can see a different kind of insect, looking more like an ant; and yet it is in fact a solitary Red-banded Sand Wasp of the Ammophila family. 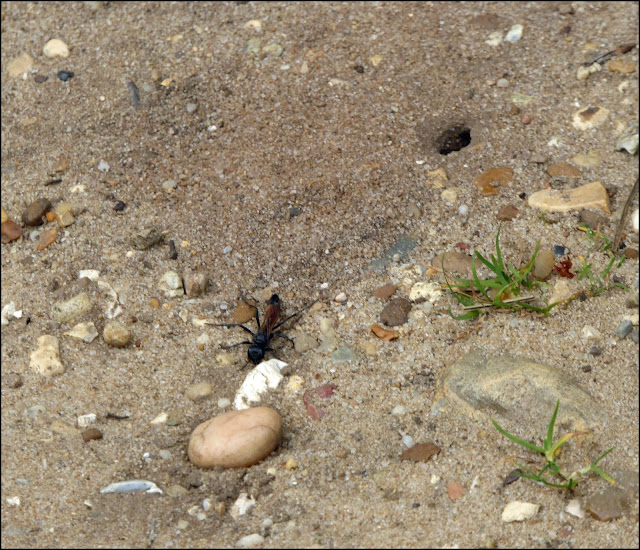 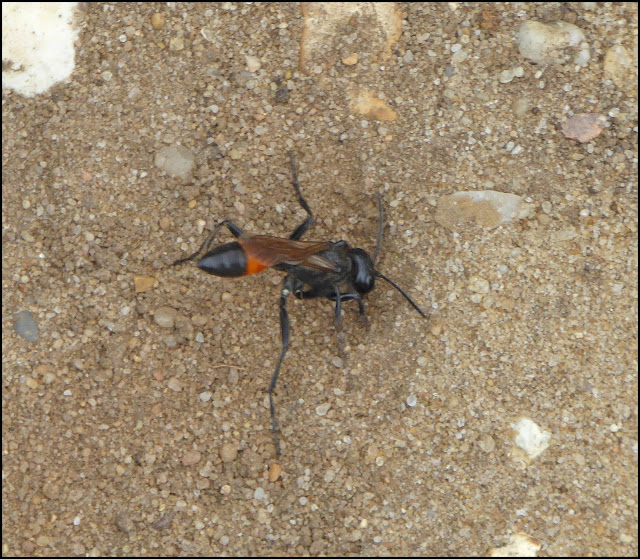 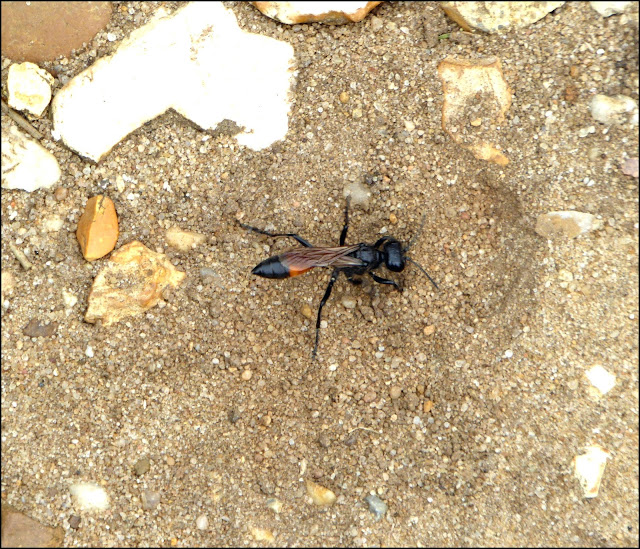 The photos that I took at Sutton Hoo were taken during a walk around the mounds. The photo below shows just how brown the long grass has become, despite the heavy rains in June. I find it sad to think that we are already about a month on from the longest day. 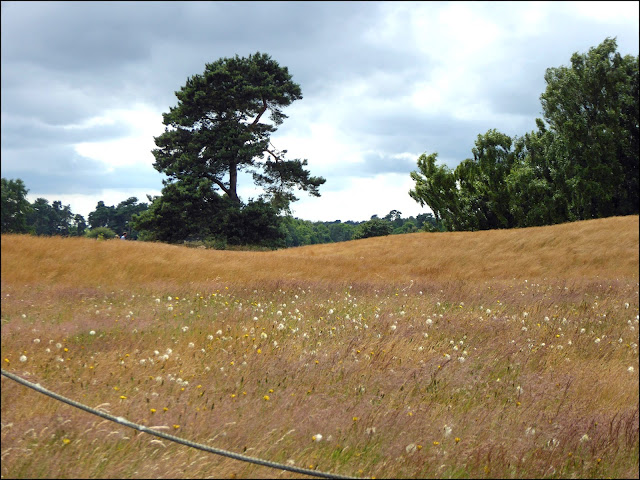 And finally, here is a photo of three friends who were quite happy to stand in our path until their pictures had been taken! 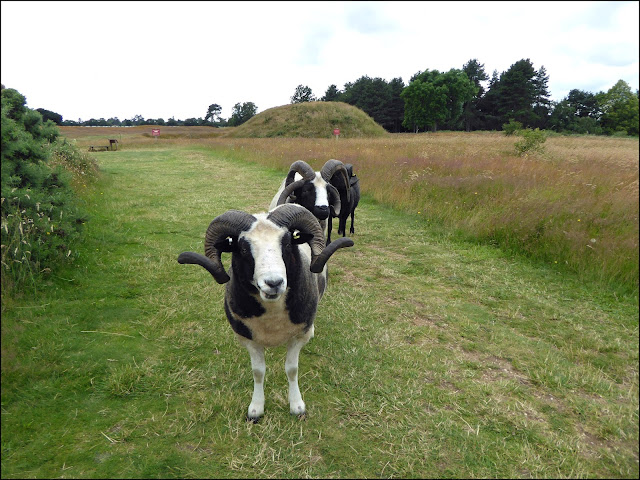 Ant lion???? What a strange concept for a thing. I do like your sequence of the digger wasp, you must have been very patient and quiet.

That was really interesting. I had no idea those insects existed in this country.

Hi Caroline, you are a great observant. These things are not done by many of us here except the scientists working on them, because they are common occurings. That's why when my nephew, 6 yo that time, told me he saw a spider that is very good in making his web on top of the hole of a big ant. The spider eats the big black ant immediately when it emerges from the hole on the ground. I asked how he knew it, he said he observed a long time. So together we observed, and yes his observations were true, i thought there is a making of a scientist, hehe.

Those cows are awesome, so small and yet the thorns are so long and beautiful.

Thank you to all for your kind comments. And, Andrea, the 'cows' are actually rare breeds of sheep. The dark one at the back that you can barely see is a Hebridean.