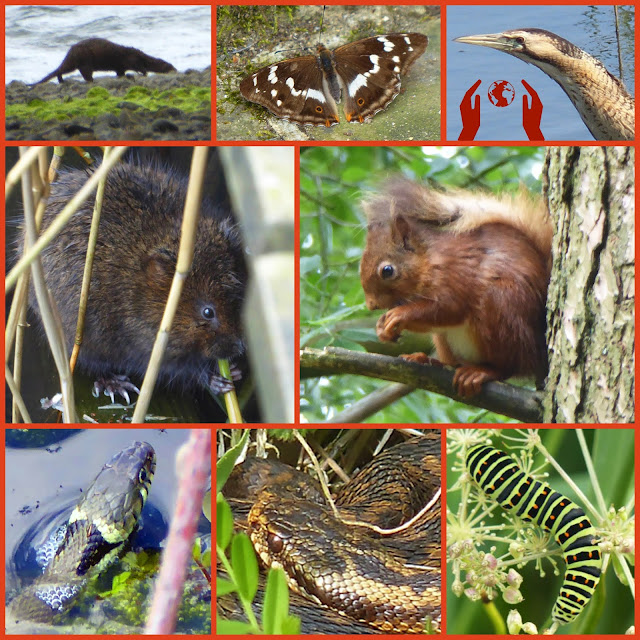 'Will we permit the rewilding of our hearts and minds,
that is so needed now?'

I wanted to remind myself of some of the threatened wildlife I have encountered over the years, and I hope you may also enjoy seeing my pictures of these fine creatures.

I recall seeing a whale washed up on a Cornish beach several decades ago. It was dead, and the memory stays with me. The 'Save the Whales' slogan certainly made an impact on me as a teenager, even if I did not know how these magnificent mammals might be saved.

Picture 1: Otter
Many of us read about otters as children and teenagers in books like The Wind in the Willows, Tarka the Otter and A Ring of Bright Water. I visited the Otter Trust near Bungay in the 1970s, but I did not see an otter in the wild until I visited Skye some thirteen years ago. I have also watched them off Mull and the Kintyre peninsula. Miriam Darlington writes about otters she has encountered and observed in Scotland (and also in Devon, Cornwall and other quiet corners of the British Isles) in her wonderfully evocative book, Otter Country.

Picture 2: Purple Emperor Butterfly
We were visiting Chedworth Roman villa in Gloucestershire when we were called over to see an unusual butterfly. It seemed to be in need of a little sugar and water, which the cafe supplied. I took this photo, and sent it off to Matthew Oates, who confirmed that we had been looking at Her Imperial Majesty, the Purple Emperor (you can read his upbeat reply in the Postscript to my post here). The fact that this resplendent, if slightly dehydrated, Emperor was visiting a Roman villa made us smile. I hope she revived and lived her butterfly life to the full.

Picture 3: Bittern
When I was growing up, one of our family board games was Conservation, a game produced by the RSPB to encourage young people to learn about endangered birds in Britain. The Bittern was one of these species, and it was a bird I never thought I would see despite the fact that our home was only about a mile from some of the Norfolk reedbeds. It was only when I moved to Suffolk some eight years ago that I finally saw, and heard, my first Bittern at RSPB Minsmere. I remember the wave of excitement that rushed through me when I set eyes on a sight I thought I would never see.

Picture 4: Water Vole
Speaking of The Wind in the Willows, I believe I was in my 40s when I first realised that Ratty was in fact a Water Vole. The photo above was taken (with zoom lens) at RSPB Minsmere. You can read about the conservation status of this delightful species here.

Picture 5: Red Squirrel
Like thousands of other children, I first encountered the Red Squirrel in the pages of The Tale of squirrel Nutkin by Beatrix Potter. Later on, when I was about eight, I saw one or two for myself on Brownsea Island. More recently I have watched them in the Cairngorms and in Dumfries and Galloway. You can read about their situation here.

Pictures 6 and 7: Grass Snake and Adder
I had seen very few snakes in the wild here in the UK until we moved to Suffolk. Since then I have seen a handful on a couple of reserves, namely RSPB Minsmere (Adder and Grass Snake) and SWT Carlton Marshes, where I photographed the Grass Snake in the picture above. The adder in the photo was on the Minsmere Adder Trail: an RSPB official pointed us in its direction, and there were in fact two snakes coiled round one another. What a privilege to see these reptiles.

Picture 8: Swallowtail butterfly larva
Ah, I had been longing to see a Swallowtail butterfly, and here at last was a Swallowtail larva on the NWT reserve at Hickling! I had spent my teenage years in Norfolk at the edge of The Broads at a time when these butterflies were practically non-existent so the thrill of seeing this magnificent caterpillar was almost overwhelming.
*
I hope you have enjoyed my 'conservation' selection. The lockdown has certainly allowed our wildlife to experience a more peaceful few months than usual. Let's acknowledge that there may be lessons we can learn. It is wonderful when people join together to put measures in place, whether political or environmental, to enable threatened species to fight back.
Posted by Caroline Gill at 23:14