Day 19 #30DaysWildCreativity: A Dazzle of Damselflies 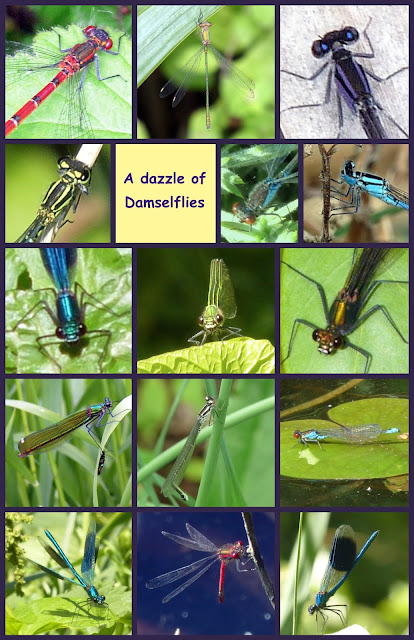 This collage was made in response to Dr Miriam Darlington's #30DaysWildCreativity meme on the theme of the reciprocal relationship we have with nature. The idea was not (necessarily) to write about feeding the birds or planting vegetables but to tap into something that represented what we had done to connect with an aspect of the natural world.

After a difficult spell I found myself drawn back and back, with camera and binoculars, to the WWT centre at Llanelli in South Wales. I became increasingly aware of the variety of 'damsels and dragons' that could be found on the bushes and at the edge of the scrapes on the reserve. I was keen to see how many species I could spot on each visit; and the more I looked for odonata, the more I became intrigued by the damselflies with their slim bodies, beautiful markings and shimmering iridescence.

I don't recall seeing any Demoiselles on the WWT reserve, but these majestic insects remain a particular favourite to this day. It was not just the physical features of the Llanelli damselflies that made me want to photograph them: it was their eyes. Now, I don't want to enter the realms of anthropomorphism or speculation here, but I think you may agree that to peer into the eyes of a damselfly is like opening a window on a very distant past.

My photos in the collage were taken in various places, some at WWT Llanelli and other locations in South Wales, some in Suffolk and one in Norfolk.

beautiful photos in the collage Caroline. I love seeing dragonflies and damselflies, the best place i know for them is WWT Caerlaverock in Dumfries and Galloway.

Oh, Juliet, and I so nearly included one from Caerlaverock Castle!