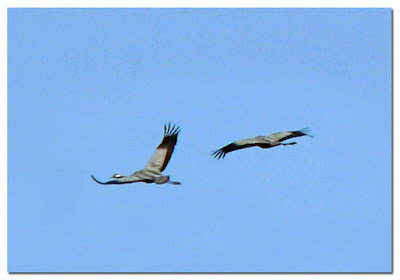 We have just returned from a few days away on the east coast of England. I will post about Puffins soon, but I thought these Common Cranes deserved an initial mention since it was my first sighting of these birds in the wild.

We knew that the Cranes were about, but we really were not at all sure that they would put in an appearance. However, we had not been sitting quietly for very long when we heard a very distinctive sound. It was unmistakeable, and you can listen to a short (if somewhat muted) recording on the RSPB site here. We find Homer in the Iliad comparing the sonorous call to the noise made by advancing armies. We read that ...

"the Trojans advanced as a flight of wild fowl or cranes that scream overhead when rain and winter drive them over the flowing waters of Ocean." 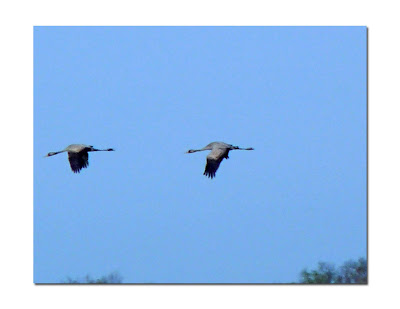 We watched the birds in a mesmerised state, not sure whether to use the camera or binoculars. 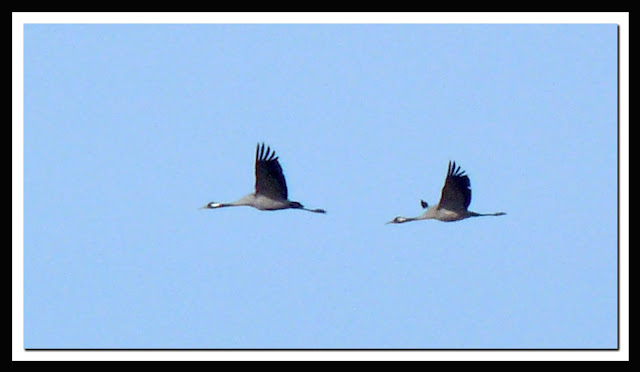 It was fascinating to see the coordination between the wings and the feet. With the help of binoculars, we could just about make out the red patch above the eye. 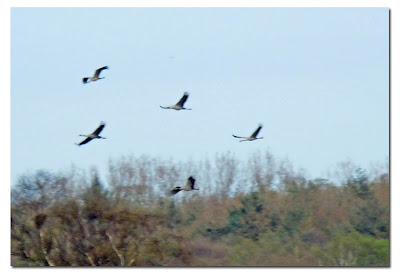 The Common Crane is very large: in flight it reminded me of a Flamingo. The Crane was once a regular part of the East Anglian landscape, but ceased to breed here way back in about 1600. Place names like Cranfield and Cranmere reflect the presence of these birds in former days. 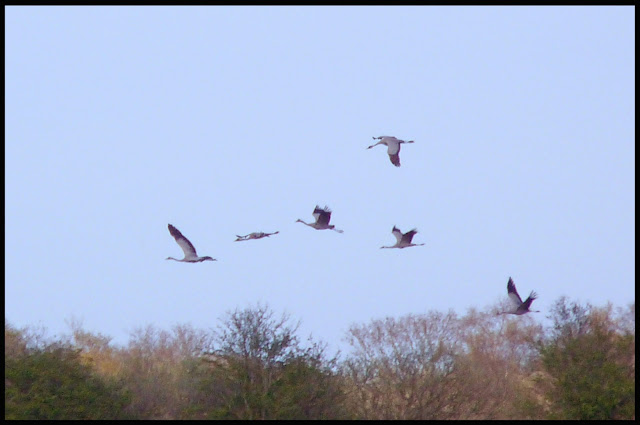 During our time away, we visited the extensive secondhand bookshop at Blickling Hall, where I bought a copy of Nature in Norfolk: a Heritage in Trust (Jarrold), a symposium volume published in 1976 to mark the 50th anniversary of the Norfolk Naturalists Trust. Eric Fowler's introduction includes a quotation by the seventeenth century diarist, John Evelyn, mentioning cranes' eggs from 'that country (especially the promontory of Norfolk.' Scientific knowledge was increasing rapidly, but concepts of 'conservation' were still two hundred years away. 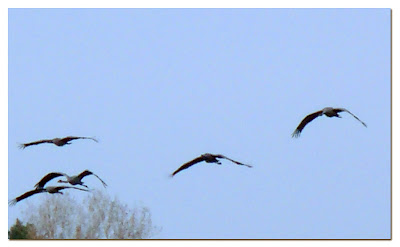 You can read more about Cranes in the UK here at the Great Crane Project, supported by WWT, RSPB and Pensthorpe Conservation Trust. The Norfolk Wildlife Trust supports the Common Crane along with many other species in its patch. We joined the Trust while we were away, and greatly enjoyed the NWT reserves at Cley, Ranworth and Hickling. 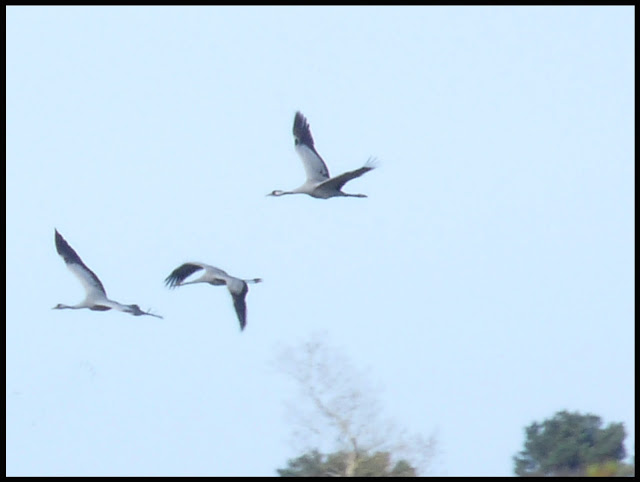 So why was I keen to see the Common Crane in the wild? Well, it is always exciting to see a new bird, to tick off a 'lifer', but Cranes came to my attention thanks to the wonderful blogging work of Vickie Henderson in the USA. You can see some of Vickie's Sandhill Crane photos here. Samples of her artwork of the rare Whooping Crane can be seen and purchased here.

Just breathtaking, Caroline. Thanks so much for sharing. I have missed you.

Great post on the cranes! They are beautiful birds. Sound like a wonderful outing! Have a great day!

Aren't they fantastic. Pretty good in-flight pictures too - very impressed! My camera is a bit hit and miss there; sometimes it'll come up with an amazing one, but usually it's just a disappointing blur.

That was a really interesting post Caroline, thank you. Great photos too.

Lovely crane report! That must have been loads of fun. I enjoyed listening to the call--had forgotten the song of the common crane. All crane vocals give me goose bumps! Thank you so much for mentioning my art and for the links! Vickie