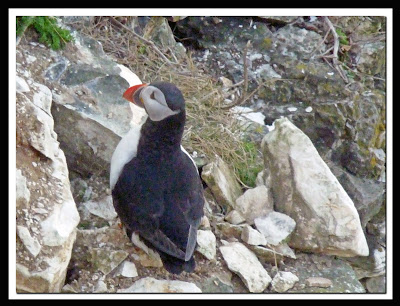 Those who are familiar with my blog will know how much I like Puffins!

I have been concerned by recent media stories (and here) of declining numbers and of dead and emaciated birds being washed up on our beaches.

We arrived at Bempton Cliffs on 20 April 2013, wondering whether any Puffins would have returned to their nesting sites. It was a cold afternoon, with blue sky and a blustery breeze. I had a job to angle my monopod and to keep the camera still. However, we had only been there a very short time when we saw our first Puffin of the season. 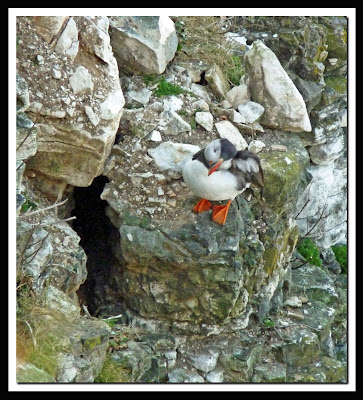 You can see the bird here, eyeing up its burrow on the cliff edge. 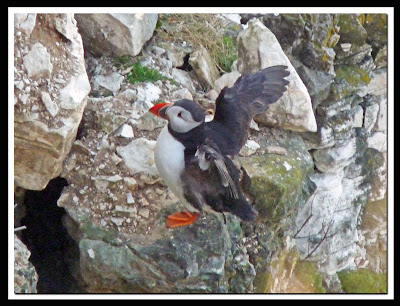 The bird flapped about a bit, but seemed tired. 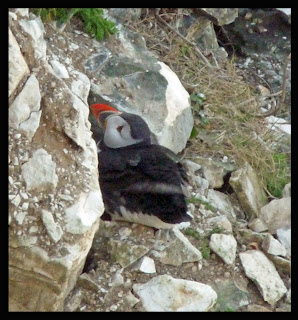 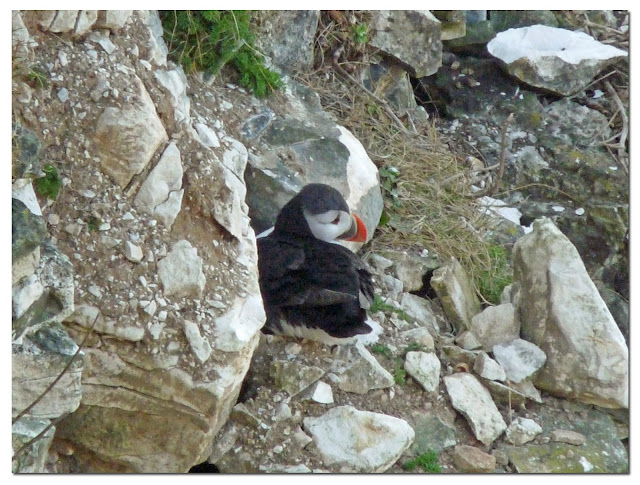 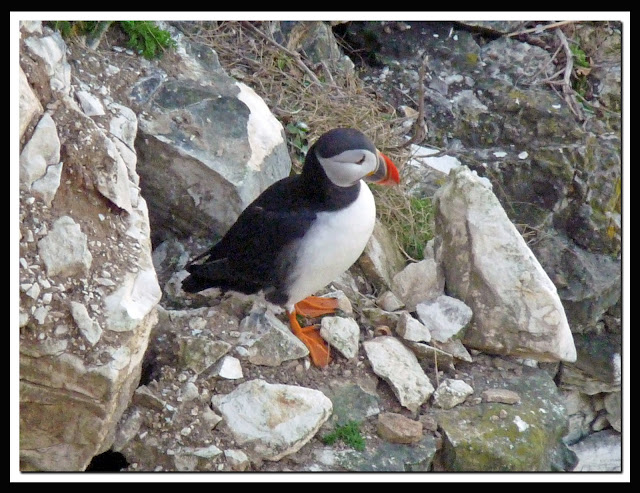 A few minutes later the bird stood up and surveyed the scene ... 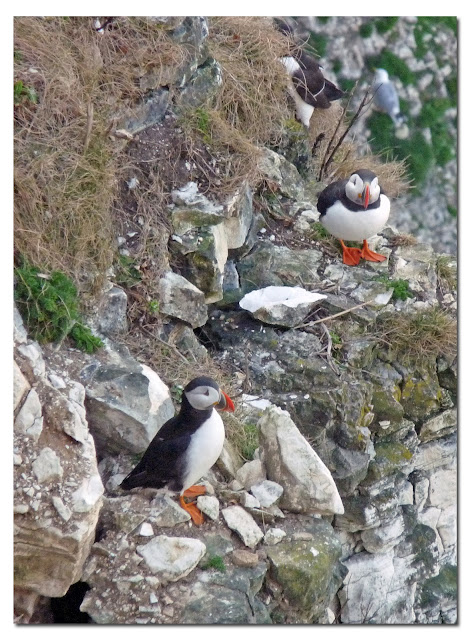 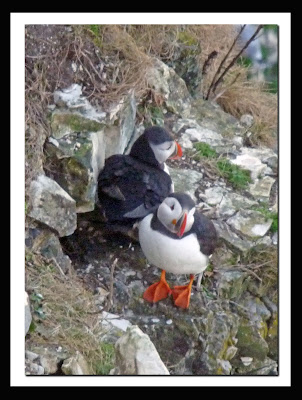 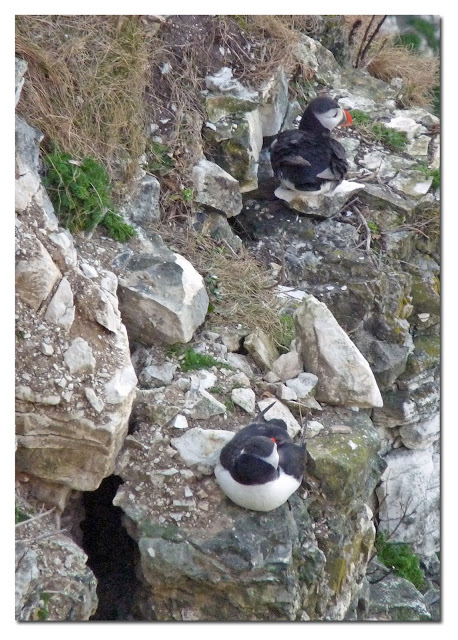 It was soon time for a further siesta ... 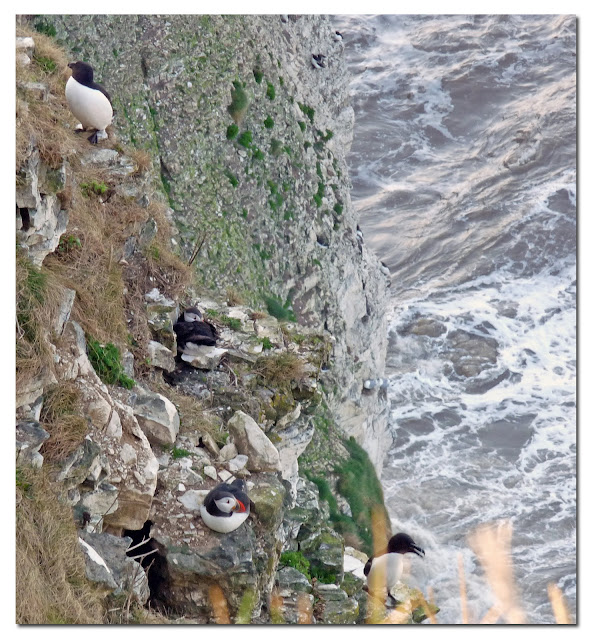 ... while the sea raged below the cliff. 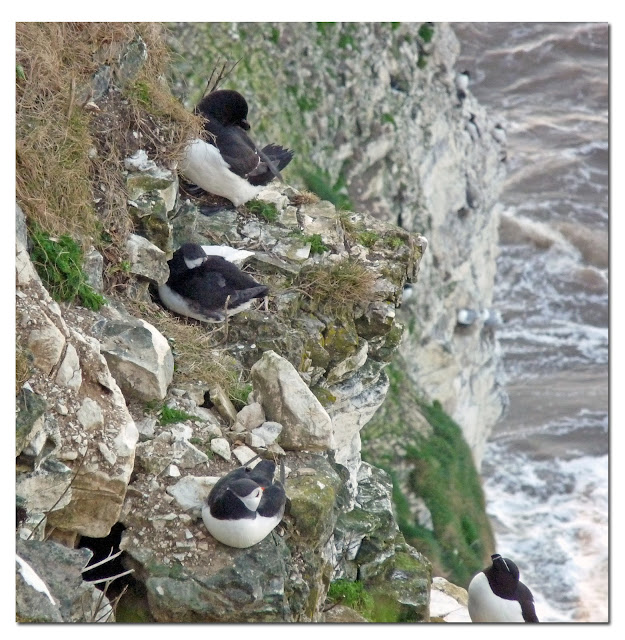 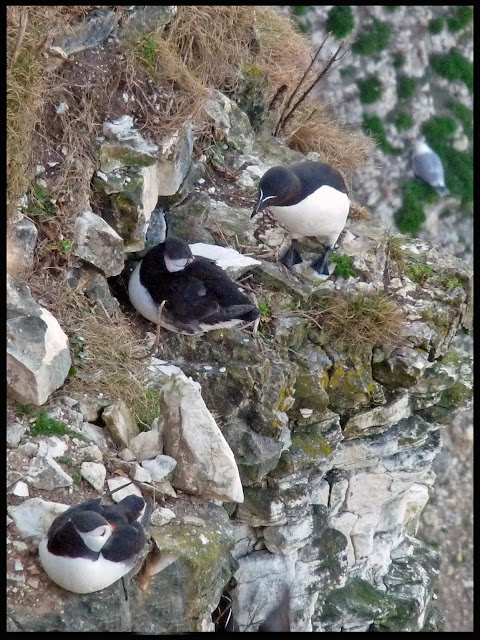 ... deciding that they needed an even closer once over. 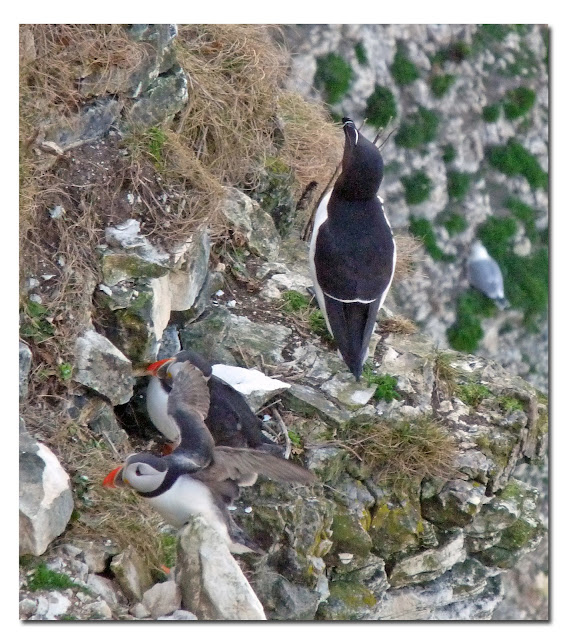 There was a sudden kerfuffle ... 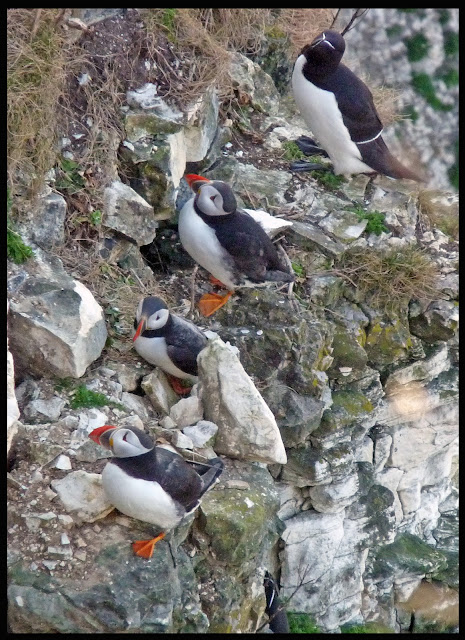 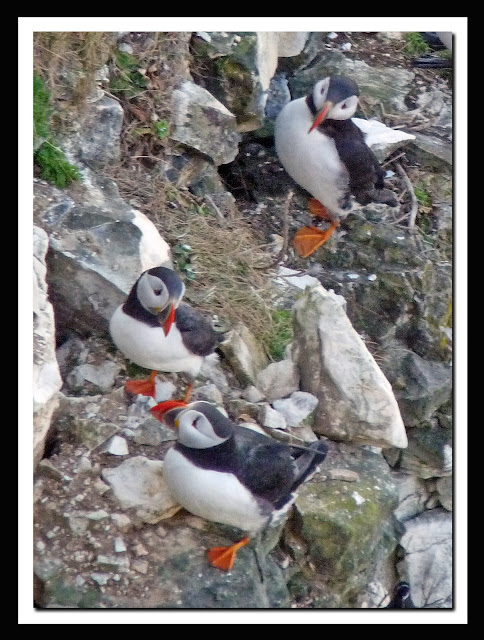 I don't know what had happened to the third Puffin's mate ... 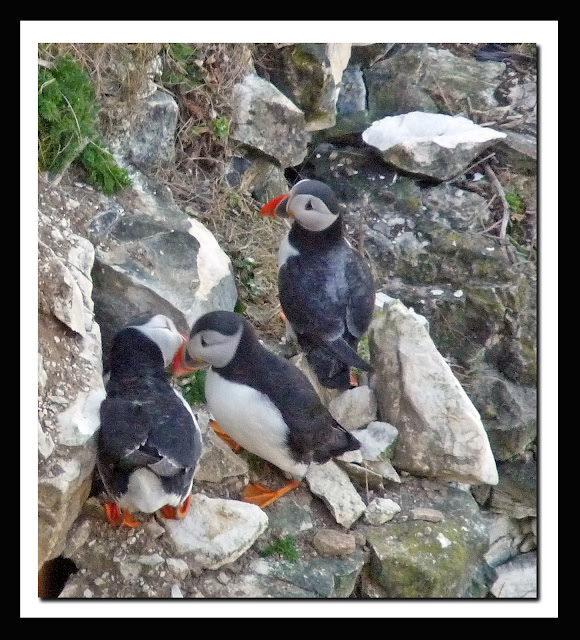 ... but the pair of birds carried on without much regard for the one on its own. 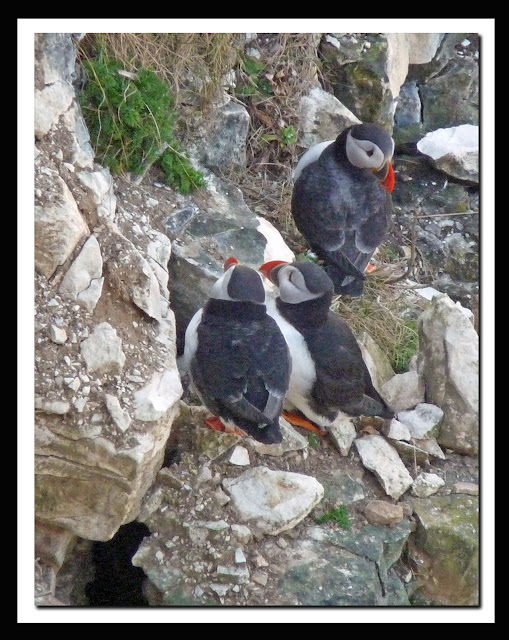 I wished I could have been just a bit closer to watch the pair as each partner demonstrated affection for the other. 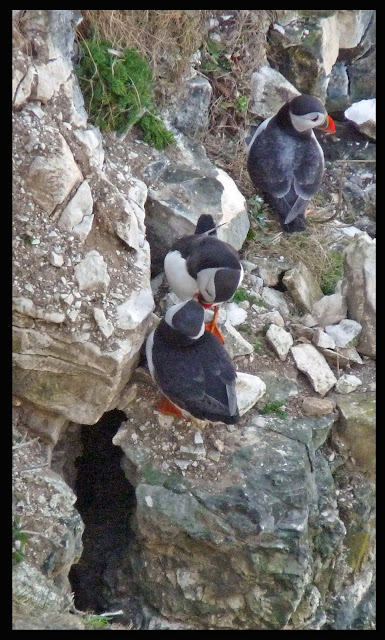 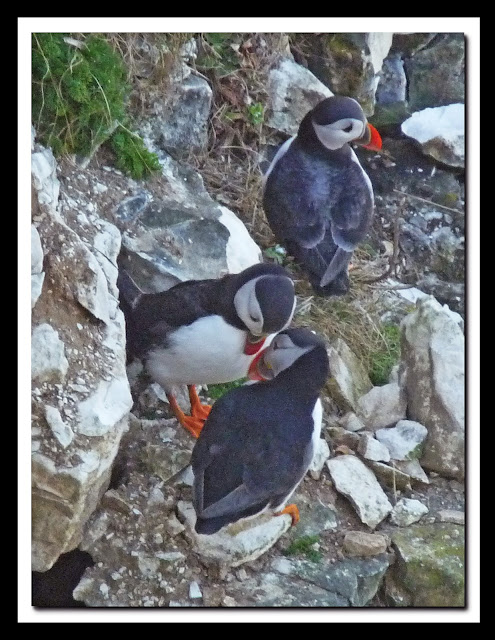 ... and I only use it because I cannot think of a better one. Suggestions on a postcard, please! 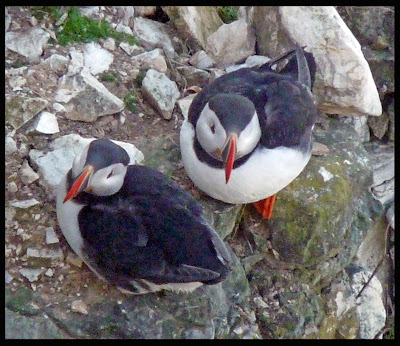 I think you can see from this photo how one partner was much larger than the other. 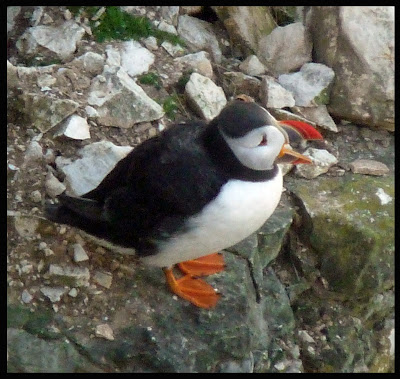 Puffins don't make a lot of noise on the cliff, so I was interested to see this bird opening its bill. 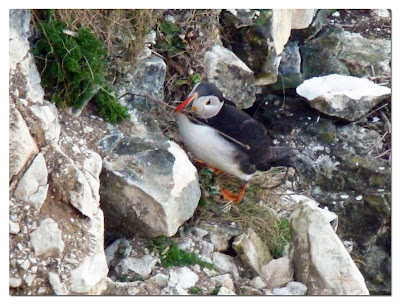 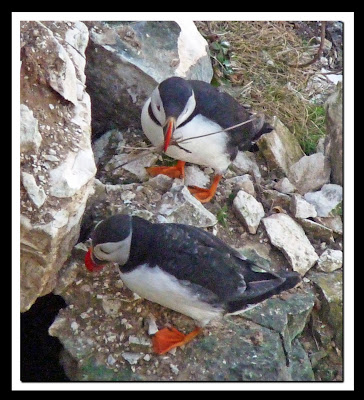 for a bit of nest-building. Puffins lay a single egg. You can read about the breeding season here. 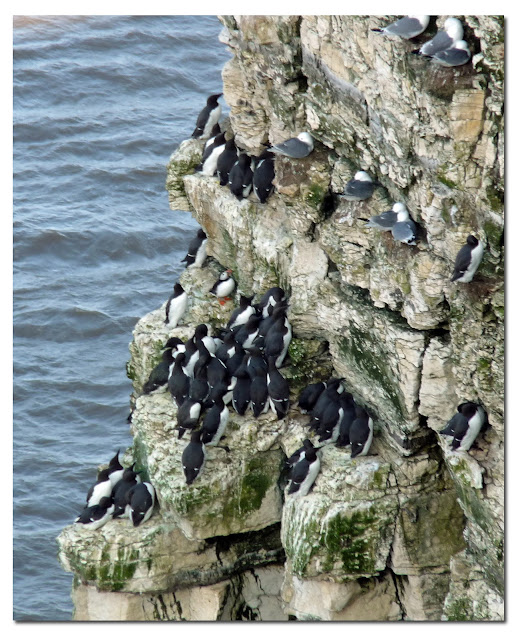 During the time we were out on the cliff, we saw three Puffins (the ones in the photos above) to our left, and this single Puffin (spot the orange feet) in among the Guillemots on our right.

RSPB Bempton Cliffs is a wonderful resource, and the main Puffin viewing areas are pretty accessible. I would love to visit the site once the Pufflings have hatched later in the season.

Caroline, you are so lucky to see these cute birds. And so close, wow! I would love to see the Puffins, they are adorable. Great shots and I really enjoyed this post.

Great shots, Caroline. I went there quite a few years ago - what an amazing place!

Affection is fine by me as I can't think of a better one either. Perhaps you should make one up?