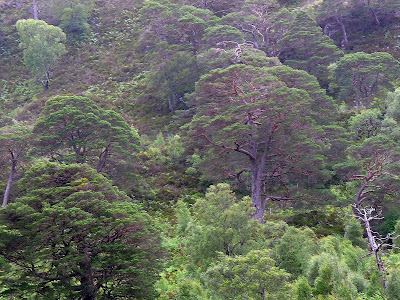 Remnants of the Caledonian Pine Forests,
one-time home of the Auroch, the Grey Wolf and the Brown Bear

We left Skye and drove on up to Ullapool in early July 2010,
passing some amazing scenery around Torridan,
with blue-green lagoon-like lochs.

We were soon in the area of the ancient Caledonian pine forests.
The heights of Beinn Eighe towered above us,
with its cloud-hidden ridges and slopes of scree.

The Beinn Eighe Nature Reserve was established in 1951.
It was part of a strategy to preserve the pine forests above Loch Maree. 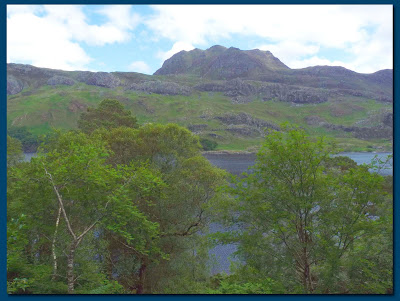 This is where we stopped for a picnic lunch, just above Loch Maree.
The mountain in the background is the Munro called Slioch. 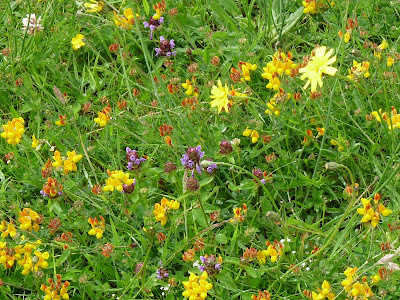 The wild flowers along the shore of the loch were stunning.
Loch Maree is bordered on the Slioch side by deciduous oak woodland.
The Beinn Eighe pine forests line the opposite bank.
The water was low due to 'drought' conditions,
but the loch lines a glacial trough of up to 110m deep.

An information board informed us that the loch
boasts almost 6% of the UK breeding pairs of the Black-throated Diver.
This bird is found most commonly
in the forests of Siberia and on the Arctic tundra.

There are 66 islands on Loch Maree.
Some of these are home to Scots Pine trees of 350 years old.

It is a sad fact that a mere 1% remnant
of the Caledonian Pine Forest survives today
in 35 scattered locations in Scotland.
The appellation 'Caledonian' is thought to have come from the Romans.
They called the land of Scotland 'Caledonia',
supposedly after a Celtic word meaning 'strong'.

My ancestors come from the Kingussie area of Scotland,
so I was particularly interested to learn that 'Kingussie'
means the 'Head of the Pine Forest'.

beautiful pictures. glad you guys were able to look around and share this time with us. sad to hear only 1% of the forest remains. hope all is well.

Caroline I'm thrilled that you have a new blog with wildlife photos. We wanted to go up along the west coast this week but the weather has been so dreadful here we decided to just stay at home. The boys say it takes me too long to even go on a walk as I'm always stopping to take photos lol

I've never been in the areas you have visited and the photos look so idyllic and just look at those wonderful wildflowers.

caroline thanks for giving me the link to this beautiful blog!!! it's been a very long time since i was in scotland. the highlands stay with me to this day as among the most beautiful places i've ever seen. steven