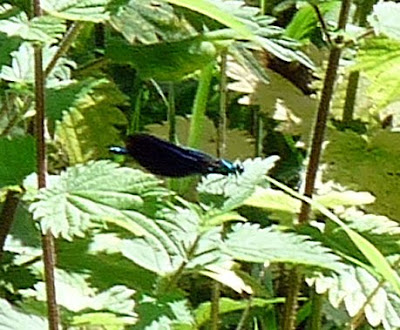 I have been looking at Dragonflies and Damselflies.
Today the Demoiselle comes under my spotlight.

The photograph above was taken in Llandeilo, Wales, UK, on 12 June 2010.
I thought I had missed the creature altogether,
so although this photo isn't great,
it was a bonus.

I had already failed to photograph a different one,
flitting through the stinging nettles
at the edge of the Guardian Hay Festival site in May. 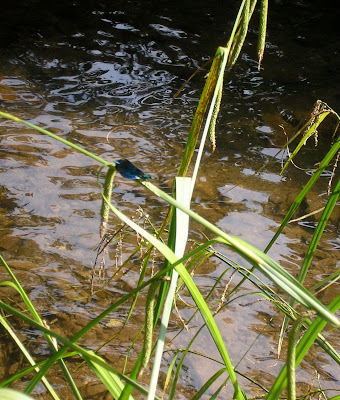 The Demoiselle in the photograph above was seen
at Dunster in Somerset back in July 2005,
in very close proximity to a large Slow Worm -
yet another creature to escape my lens.

I have blown it up to a ridiculous size below,
just for the colours. 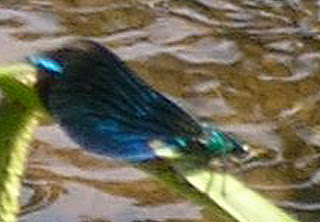 The photo below
gives a reasonable overall impression of this exquisite
and iridescent species. 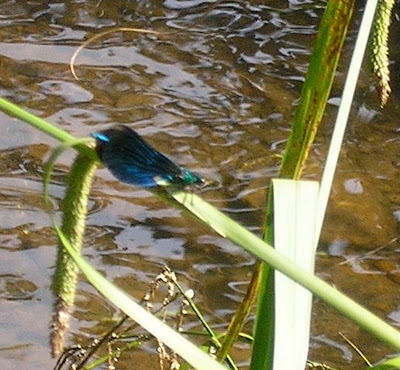 I think this creature above may be a male
Beautiful Demoiselle.

Demoiselles are in fact Damselflies.
We have two varieties in the UK:

which has less hairy legs!
The latter frequents slow-running waterways.

Demoiselles display colourful courtship rituals.
The Banded Demoiselle has deep blue areas on each wing,
and it is these that transmit signals to the female.

It is worth pausing to consider the matter of iridescence.
The play and quality of light at a given moment effects the colours registered by our eyes.
The 'Explore' section of the July-September 2010 WWT Waterlife magazine
has a helpful feature in its kids' zone on p.42,
explaining how the iridescence factor
effects the colours we associate
with that other iridescent icon,
the Kingfisher.

I know the Banded Demoiselles... They are stunningly beautiful!

Caroline I've only seen these little beauties in photographs - I would be so excited to be able to see them for real - the colour is just fabulous.

I was reading a website, Rosie, about Demoiselles north of the border: had always thought of them as southerly creatures.

Hi Caroline! Thanks for visiting my blog. Amsterdam is in fact more beautiful then Rotterdam, because it was never bombed during the war. The old buildings of the rich people from the 17th century are still there.
Your demoiselles are beautiful. You must have had a lot of patience to take these photos. You live in a wonderful part of Great Britain. We were three times in Wales near Llandrindod. We saw the castles which we found very impressive.

Hi Caroline, I didn't know that these beautiful insects were called demoiselles! I've photographed damselflies but not the ones you've shown. The colours are striking!

Thank you for visiting my blog. I look forward to reading your posts and learning from them. I started photographing insects only after I started blogging nearly three years ago. Still googling a lot to learn their names:)

Have a great weekend!

Was at Dunster today and saw two male Beautiful Demoiselle by the water mill.