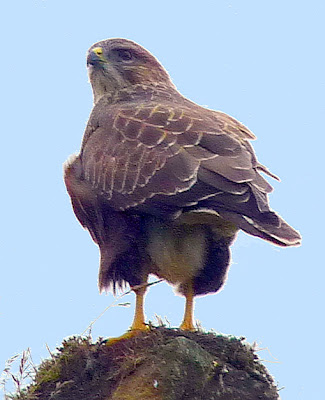 Buzzard
below the Quiraing
[Buzzard photos by David Gill, with an 18x zoom]

I have a strange relationship with the Buzzard.
When I first encountered one,
I thought it was truly amazing, largely on account of its size.

Many Buzzards later,
I began to feel that this species was less appealing.
We often saw Buzzards hanging around motorways,
waiting for easy pickings.

A bird has to eat, I hear you say, and this of course is true.

I then began to spot Red Kites (quite a lot - largely here in Wales)
and the occasional Eagle on Skye.

I felt the Buzzard lacked the grace
of these other birds of prey.

It was time to address my prejudice! 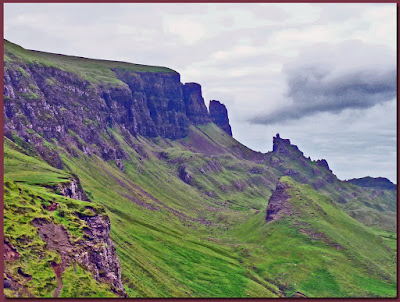 Looking up towards the Quiraing

I had to admit that the Buzzard looked quite different
when I saw it against the background
of a wild rocky landscape like the Quiraing.

Its size was tempered by its surroundings,
and I found myself admiring its ability to survive and thrive
in such harsh and inhospitable terrain. 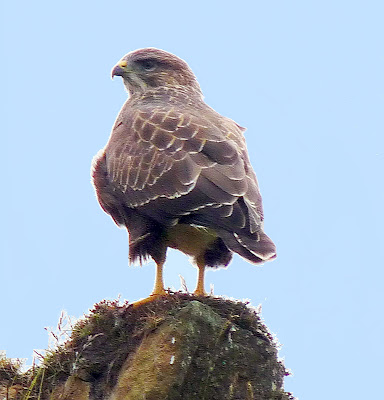 Above and Below: the Buzzard again

I have to confess, however, that when we first caught sight
of this particular bird,
I really hoped for a moment
that it was going to be an Eagle -
probably a Golden Eagle.

But a Buzzard it was.

This species is not known
as the Tourists' Eagle for nothing!

As we drew closer, I begrudgingly had to admit
that it displayed a certain rugged grandeur:
beauty is still not a word I feel happy to use of our friend ...

But I am glad that we have the opportunity
to see these impressive creatures flying free
in their natural surroundings. 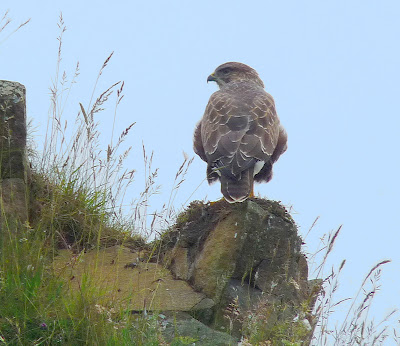 You can just make out the yellow legs.
[Sea Eagles aka White-Tailed Eagles
and Golden Eagles also have yellow legs].

The white chest with brown spots does not show up
in these pictures,
but the yellow area just above the beak is visible
in the first two Buzzard shots.

I did not know before that these birds are very territorial.
It did not surprise me to learn on the RSPB site
that the Buzzard
'our commonest raptor',
here in the UK.

Buzzards in the news:
The Quiraing
Posted by Caroline Gill at 18:45

i think it's great you get to see such prominent wildlife. it's beautiful. have a great day/ weekend.

Buzzards have been doing really well across the UK, I think they've been increasing in number as the kestrel declines.

I like buzzards but I have to admit I prefer the hover of a kestrel, the speed of a peregrine or the wonderful colour of a red kite. My greatest raptor memory is actually of a hen harrier flying out of a hedge immediately in front of me!