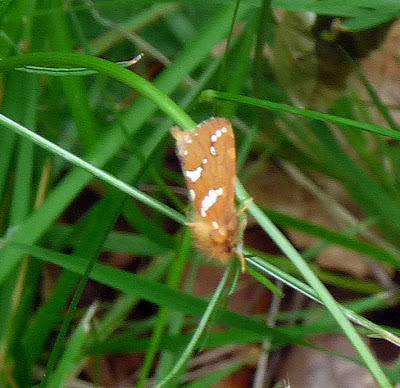 We encountered this moth in the middle of the morning in a shady corner of leaves, grass and bracken, beside the road from Newtonmore to Laggan in Badenoch, Scotland.

I have as yet been unable to confirm my identification - but I think it may be a male Gold Swift, Phymatopus hecta (Linnaeus, 1758). [P.S. 18 August 2010: my thanks to Stuart of Donegal Wildlife for confirming my ID].

The Gold Swift moth belongs to the family of Hepialidae. The males of this species supposedly have a scent resembling that of pineapple, but I cannot vouch personally for this! I saw the above moth in late June [2010], which is when the adult moths fly around, usually from dusk.

Female Gold Swifts are more muted in tone. They deposits their eggs on the wing. Their larvae feed on bracken (Pteridium aquilinum)*, mainly internally until fully grown, at which point they begin to eat young shoots.