This post is the sixth in my Tree Following series, part of a wider project run by Lucy Corrander from the Loose and Leafy blog. I am following a Silver Birch in Suffolk, UK. You will find the other Tree Follower links for August 2014 here ... so do take the chance to go on a virtual exploration of the arboreal world! 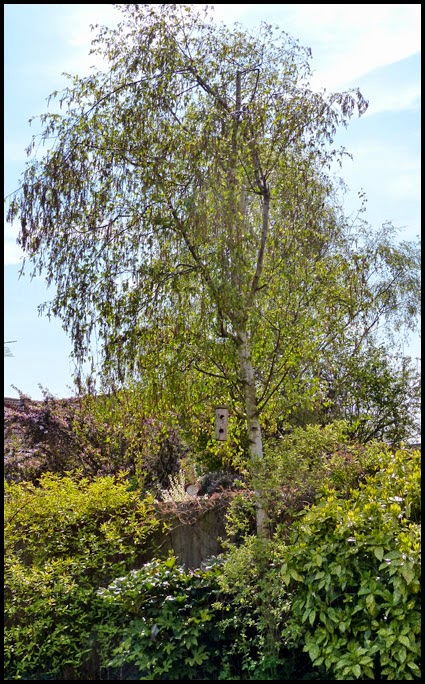 We had thousands of ants taking wing on Saturday afternoon, 12 July. They came out of the hole in the brickwork used by the mortar bees and out of the soil and out of the air itself. We did some gardening over the weekend in an attempt to reclaim our fence from its stranglehold of Mile-A-Minute Vine aka Silver Flea Vine (Polygonum aubertii or Fallopia baldschuanica).

There has been a sudden influx of birds to the area around the Silver Birch, perhaps due in part to the combination of our pruning efforts and the hatching out of the ants. The mowing of the lawn and the subsequent torrential rain disturbed yet more insects, thereby enticing the birds back in good numbers for the easy pickings.

I was delighted, if a little surprised, to find myself nose-to-beak with the fluffy face of a juvenile Long-tailed tit. The youngster was perching just above the coconut feeders on the Silver Birch. I had been taking a photograph of one of the ants on the bark, and was just thinking that a new coconut was needed. Before anything could be done about the limited coconut supply, a small company of about seven Long-tailed tits flitted across the garden. Three stopped to have a nibble before they moved on to the cover of a large shrub on the far side of the garden. I am really thrilled that they have reappeared as I have not seen a Long-tailed tit in my home patch since March. I just hope they will return at a time when the feeders have more on offer!

No sooner had the Long-tailed tits gone than a family of four Blue tits crowded around the feeder. They were soon displaced by a couple of Great tits, keen to re-assert their claim to the territory. The Dunnocks were flitting about but as I retreated to an upstairs window, the garden became still and lifeless once more. Suddenly the threatening silhouette of a bird of prey, a Sparrowhawk or Kestrel, flew from the tall trees that herald the start of the local nature reserve, and circled over the garden before disappearing in the direction of the stream.

I looked out of the french window and saw a quick flash of black and white. I wondered if it was the Great Spotted Woodpecker making an appearance after her long absence from the feeder on the Silver Birch. When I returned to the spot with my coffee a few seconds later, the only birds in the garden were a pair of Magpies, fighting the toss over some morsel of food. I assumed the previous bird had been one of them and was just feeling a little deflated when - lo and behold - there was the black and white Woodpecker, resplendent with her crimson feathers. I feel slightly guilty writing this as all birds have their part to play in the grand scheme of things and Magpies often get a bad press, but this is the first time I have ever lived in a house with a visiting Woodpecker!

Something white caught my eye as it flickered and twitched behind a post around the decking area. I waited and watched. Suddenly the bird, for bird it was, flew off its perch and descended on the coconut feeder that dangles from the Silver Birch. It was a bedraggled Great Spotted Woodpecker. It is possible that the 'drowned rat' appearance made the bird look smaller than it really was, but I am excited to think that this Woodpecker was probably from a 2014 brood. A Blue tit was hanging about in the wings and eventually plucked up courage to join the larger bird. The coconut made me realise that the Woodpecker was small, but it looked enormous beside the Blue tit! 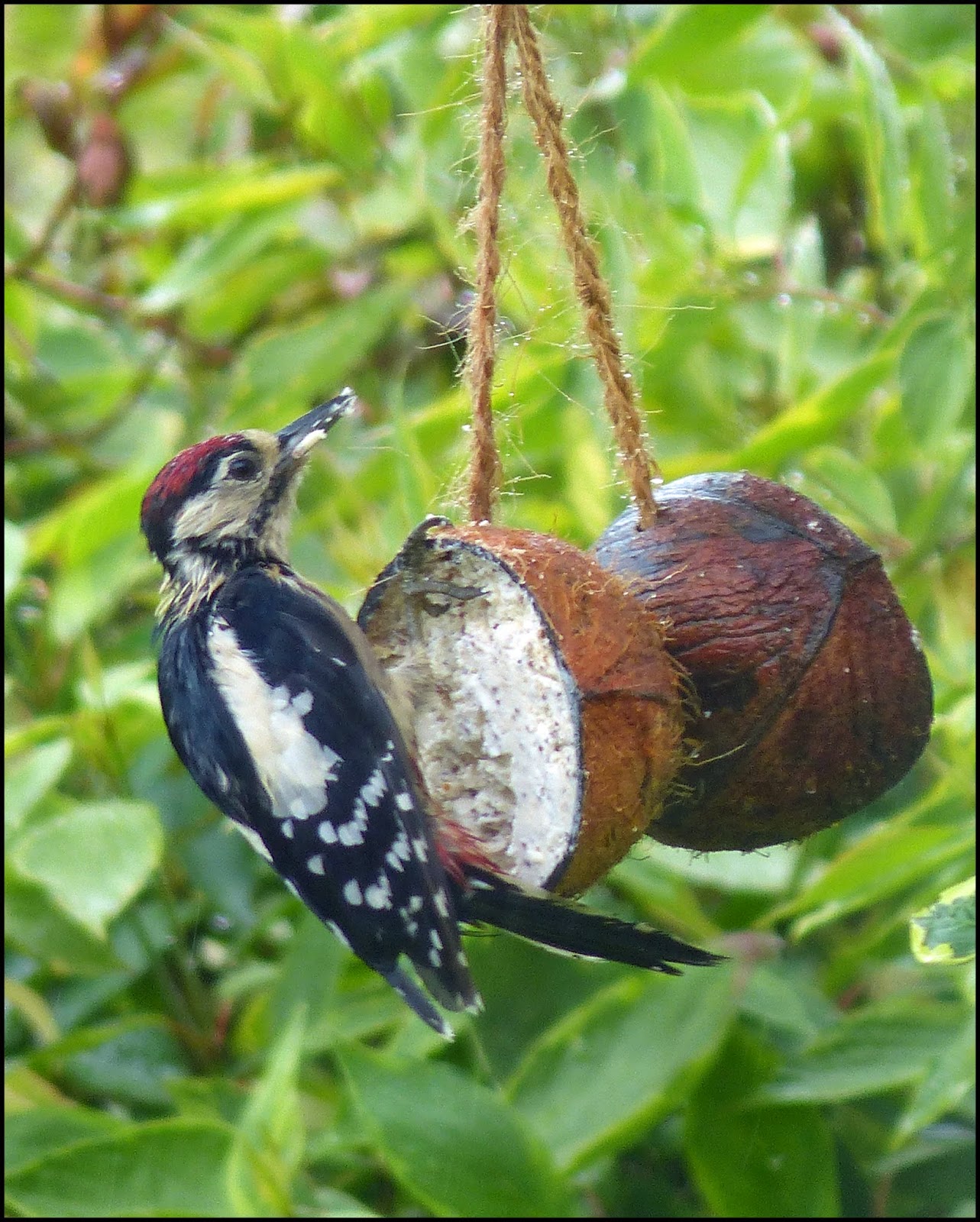 
This months sightings in, on, under, over and around the Silver Birch include ...


Previous birds not seen this month (and admittedly I was not at base all the time) ...

On the insect front, this month's sightings on or near the Silver Birch included ... 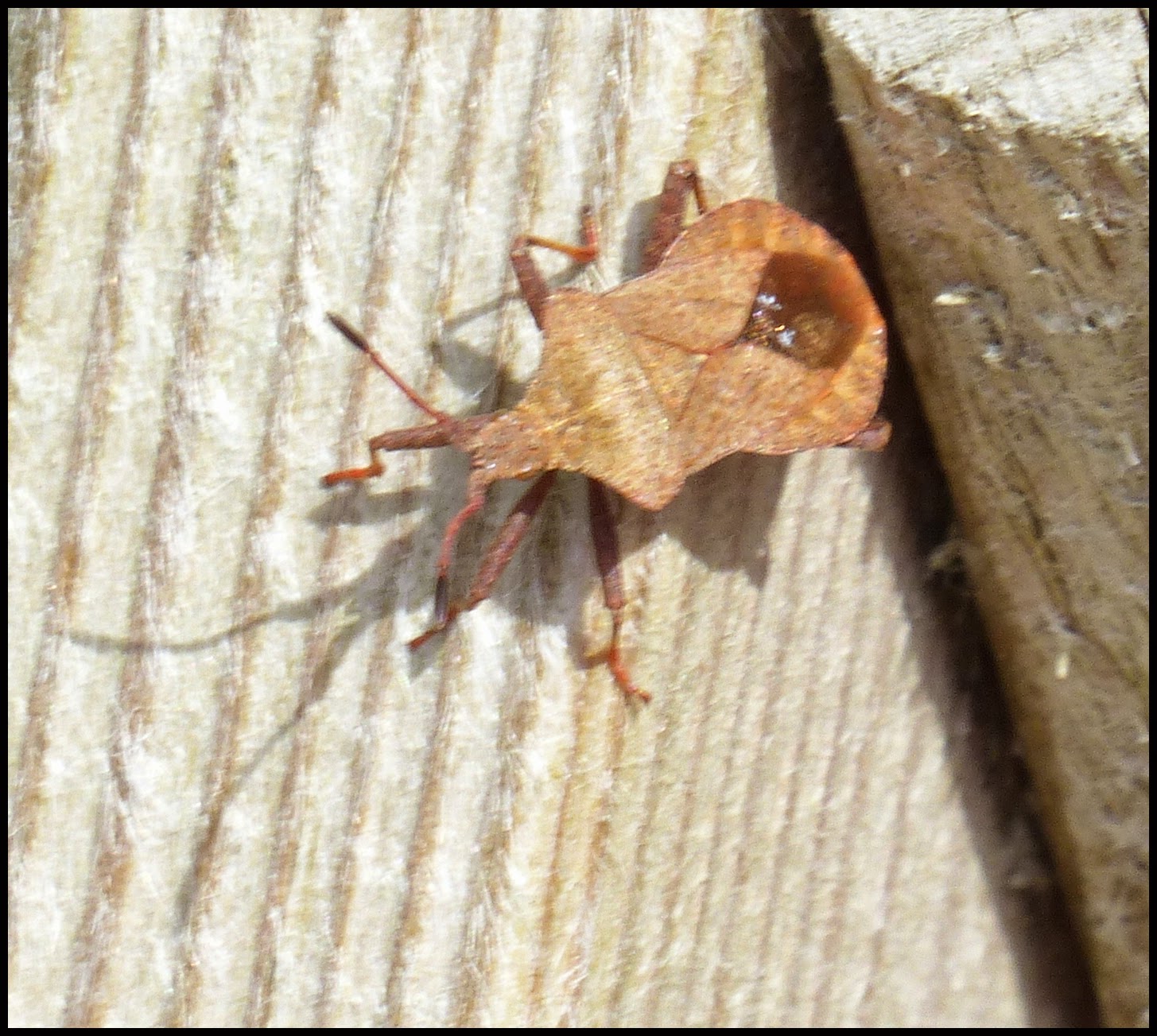 Here (below) is a photo of one of the many Migrant Hawkers. Most flitted between the Silver Birch at one end of the garden and the tall shrub in the photo at the other. The dragonfly in the picture was the only one that landed (on the tall shrub), and was therefore a sitting target for the camera. It may have a slightly damaged wing. 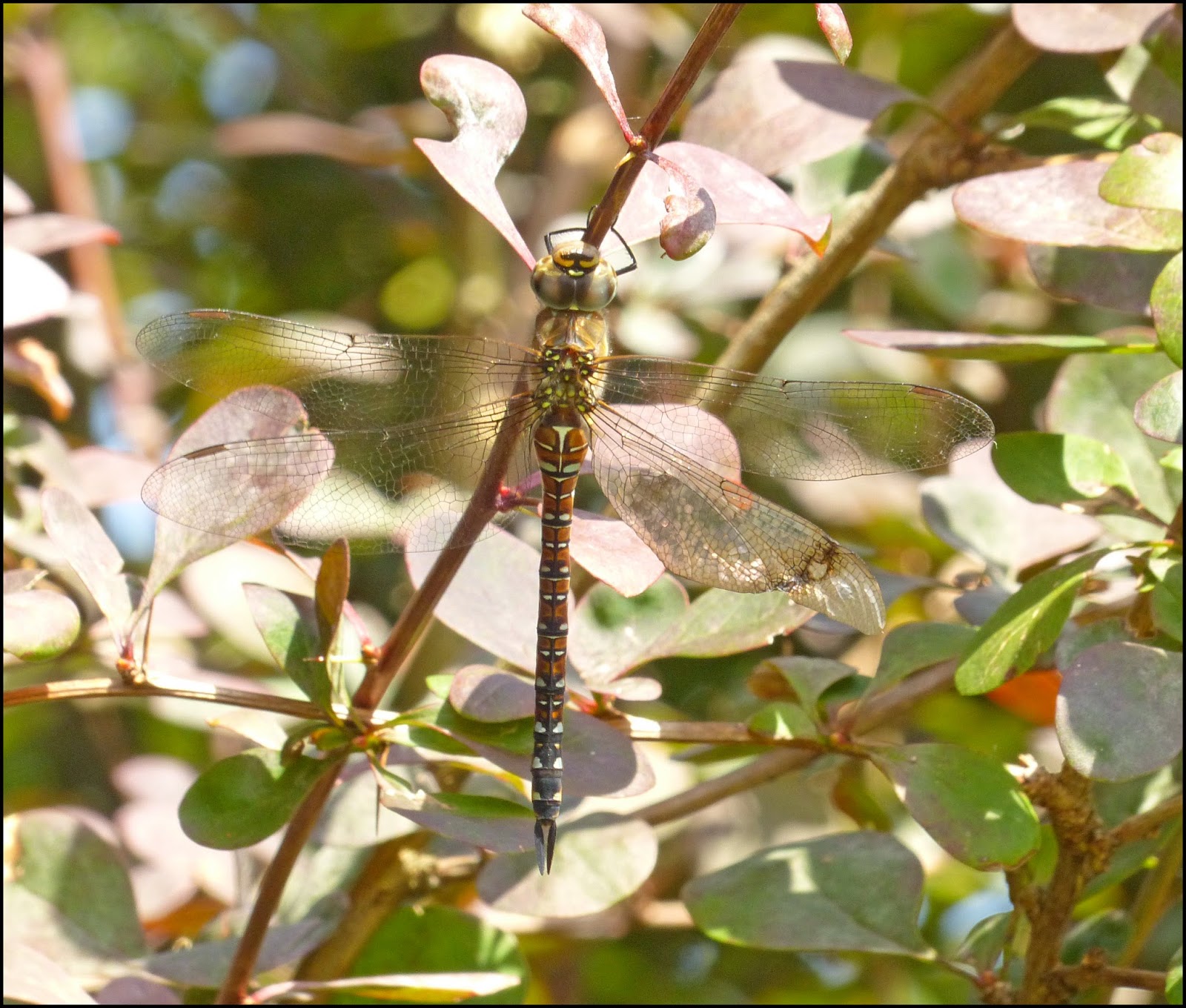 There were also plenty of moths. My moth ID skills are sadly lacking.

Previous sightings around the Silver Birch include ...
Of course it is often hard to tell whether the examples of flora and fauna that I spot in the vicinity of the Silver Birch - or on the feeders that hang from its branches - are there specifically on account of the tree.

The Silver Birch has not changed in appearance very much from last month. However, the tiny seeds seem to be everywhere. There was a sprinkling on my windowsill this morning, and one seed landed on me while I was enjoying a mug of tea in the garden. The Silver Birch produces an incredible 15-17 million seeds in a year, so it is hardly surprising that these seem to be everywhere! They look like mite-sized bats on account of the 'wings' that enable the wind to disperse them. You can find a photo here.

If you are part of the Tree Following brigade, I look forward to reading your August updates. I wonder whether you also noticed less change in the actual appearance of your tree than in previous months. I suspect the story in September will be rather different, particularly since there are already signs of an early autumn, with ripe blackberries, plenty of apples and swelling conkers.

How fortunate all those seeds don't germinate!

That's a lot of seeds for one tree to produce! I wonder how that compares to the sycamore, we have loads around here and I am forever weeding out the seedlings. Somehow I wouldn't mind as much if they were silver birch seedlings - tree prejudice in action! A quite magnificent array of birds you get in your garden, proof of the value of creating a bird-friendly environment and feeding them too.

Certainly less change in my tree this month apart from growth, but it will soon start to turn with the season. Love your tree, Silver Birches are one of my favourites.

Silver Birch are great colonisers perhaps because they are short lived and subject to drought! Yours looks in tip top condition for this time of year - supporting a lovely lot of wildlife

You have a lot of great things going on with your blog. I wonder if the silver birch there is the same as my white birch. I could look it up I guess. I have blue jays attacking an old suet cake leftover from winter feeder.

Thank you so much to all you Tree Followers and friends for the lovely comments!

Wonderful post on your tree following.. The birds are awesome and I love that last shot of the dragon.. Happy weekend!

I especially enjoy your accounts of bird visitors. The photo of the blue tit and woodpecker on the feeder is wonderful :) I also found my tree did not change much since my last post -- and I wandered off to other things.

lovely to catch up with your tree, Caroline! Lovely too to have such close views of the young long tailed tit, one of my favourite birds, and oddly one of the few birds I've actually ever been able to watch nest building, and I've seen three different pairs building nests in three different localtions...

What a wonderful variety of life flourishes around your silver birch (my downy doesn't seem quite so blessed). Interesting that your tree is shedding seed already - mine is still hanging on. I'd no idea there'd be quite so many seeds - wow...

I am really envious of all the birds in your tree! There are so many cats in our road that I have actually stopped putting bird food out, even though it goes right against my instincts But every time I do I first get a flurry of dunnocks, tits and finches; then within days at least one cat will take up residence underneath the feeder. So it feels as though I am actually paving the way for bird destruction! I do miss them though when they don't come.