We checked the weather forecast carefully on Saturday and headed south along the coast, into Essex. Many moons ago I did my A Level History project on the Roman forts of the Saxon Shore, but had never visited the scanty remains of the fort at Bradwell, which shares a site with the historic church of St Peter at Othona.

The strip of land straddling both ends of the photo above is Pewet Island. I was intrigued by the name, assuming that it was after the Lapwing or 'Peewit'. More research needed here! 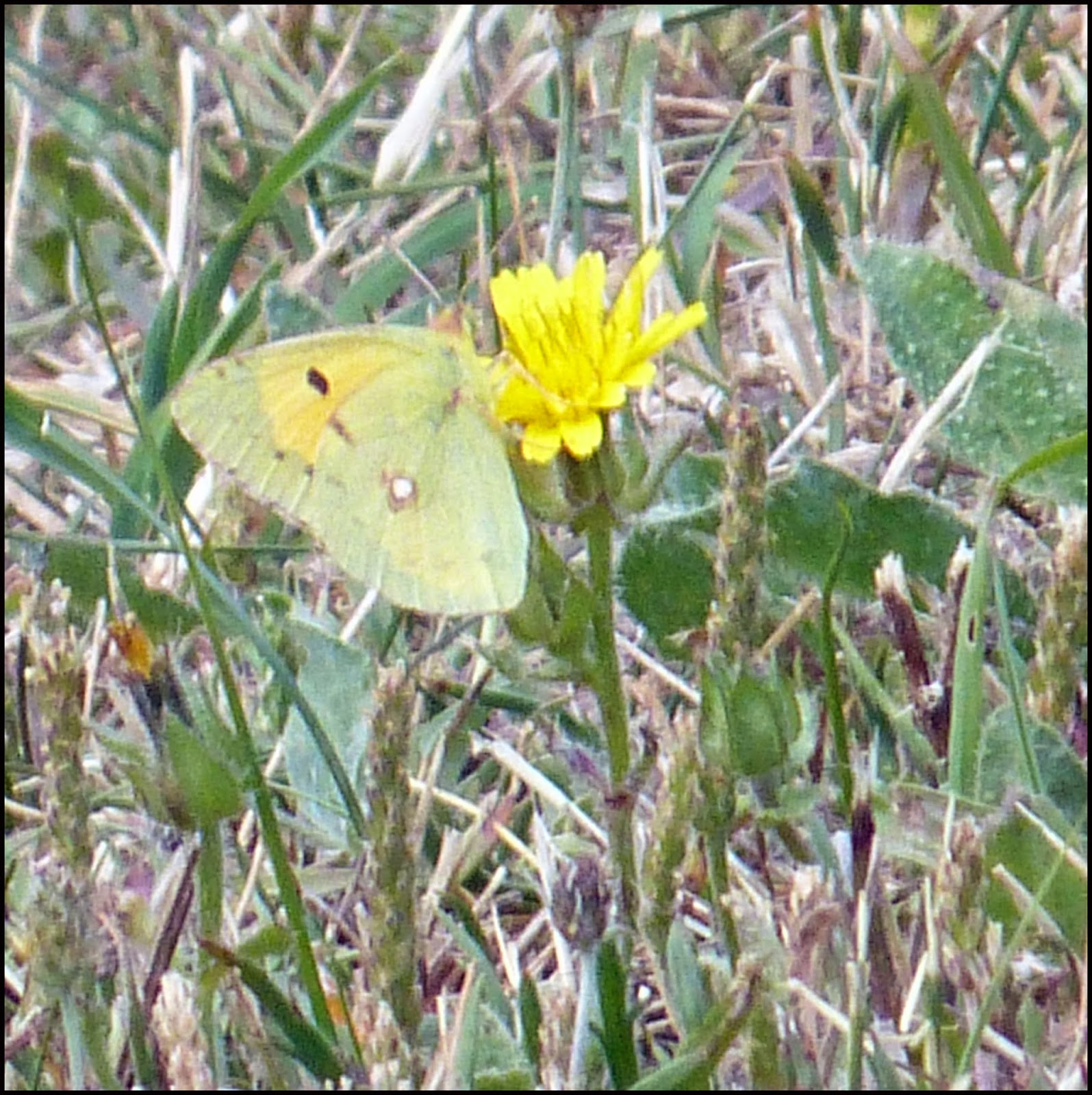 The first butterfly of the day was a rather pale Clouded Yellow. It is not a species we see very often, though I have seen these  butterflies on a bank at Minsmere on occasions. 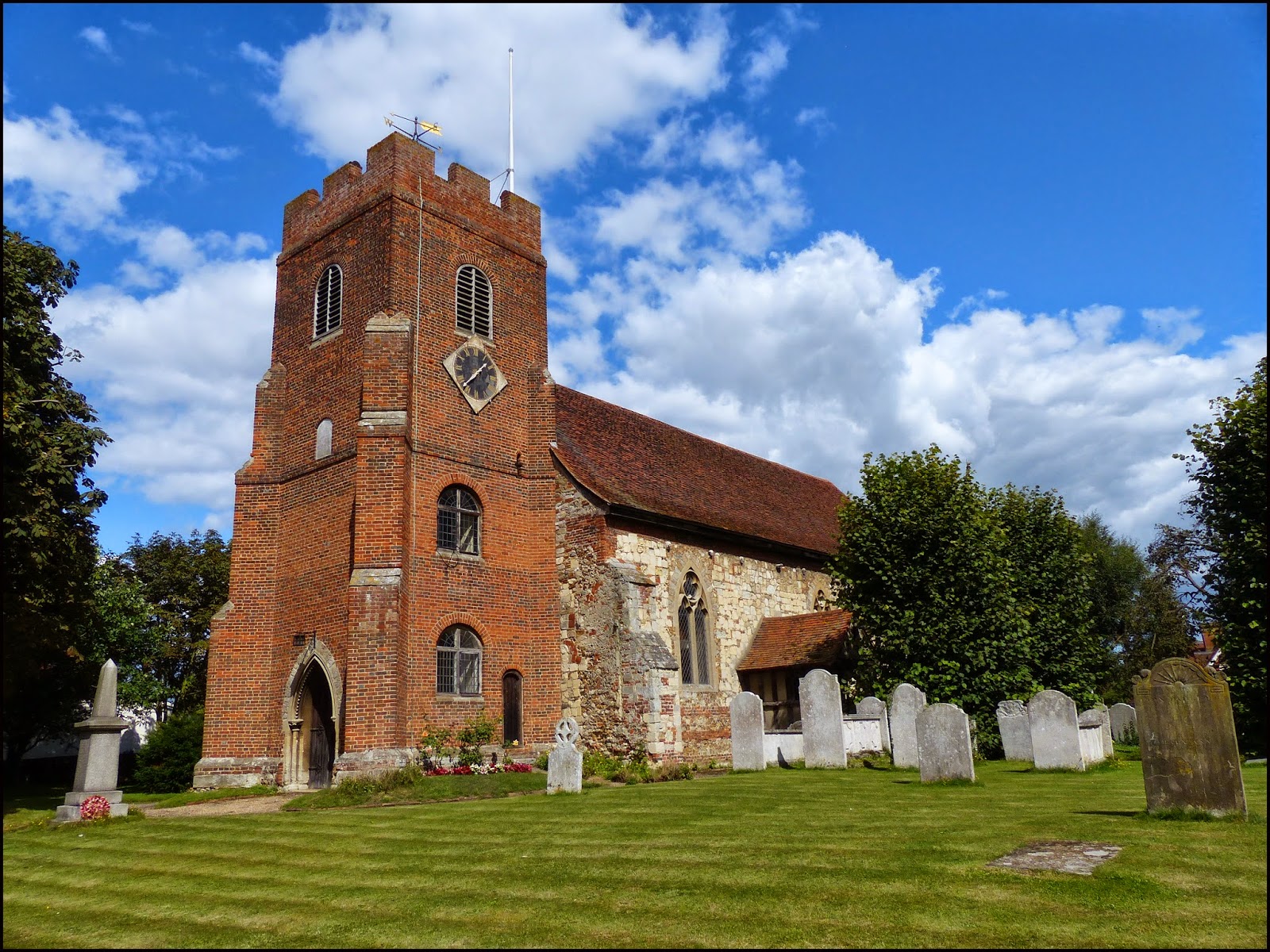 We called in at the church of St Thomas, which, as you can see, was built and re-built at different times. We reckoned we found some Roman tiles in amongst the masonry.

It was time to head on out to Othona to see the church founded by St Cedd. You can see him holding a small version of it in the stained glass window above.

We made our way down the track, looking across to the sunny shores of Mersea Island. 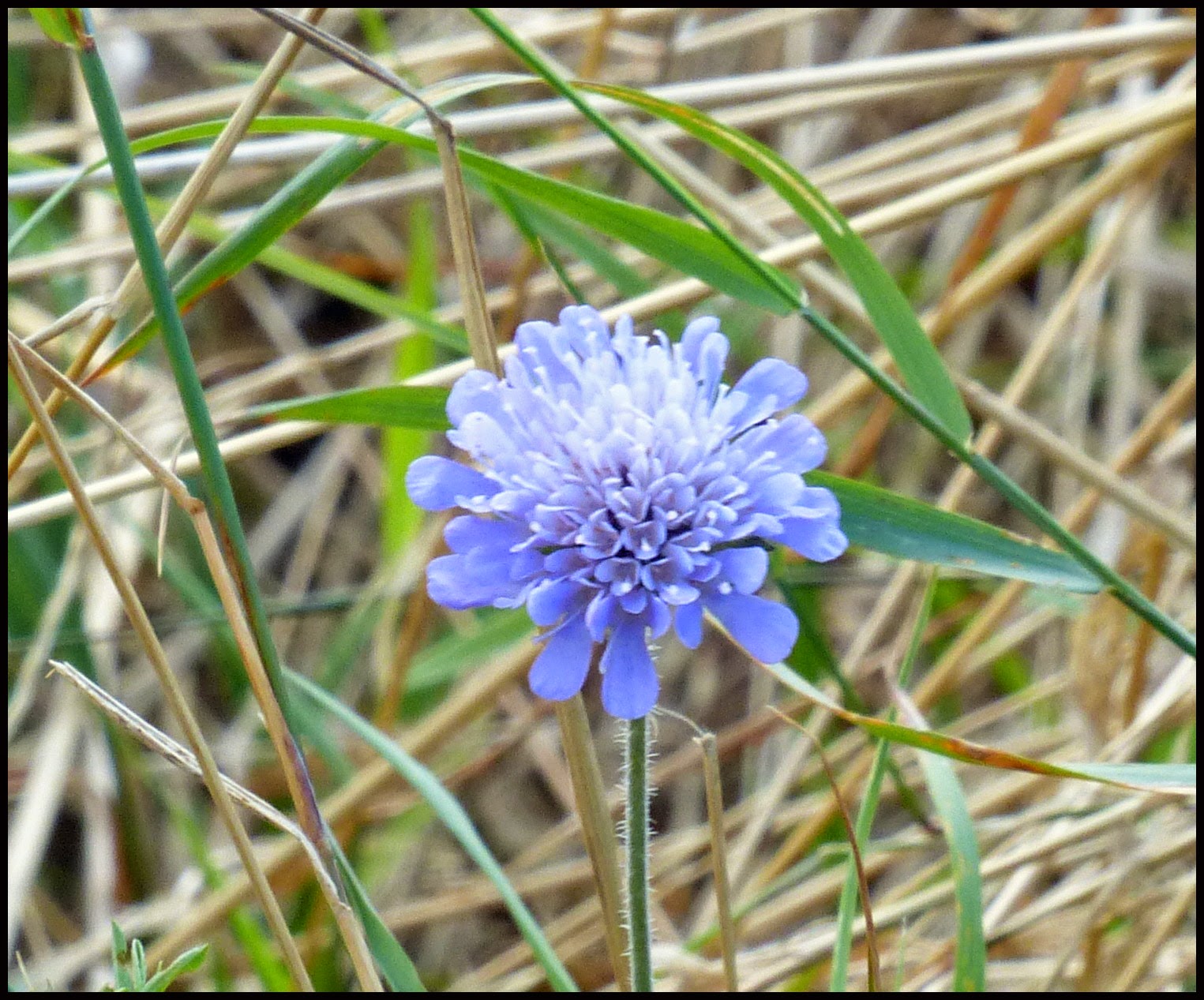 The footpath bordered farm land, and it was a joy to see Scabious heads popping up here and there.


St Peter's was built on the west wall of the Roman fort of Othona. We could make out a rise in the turf and we found signs of masonry but there was not much to be seen of the fort. 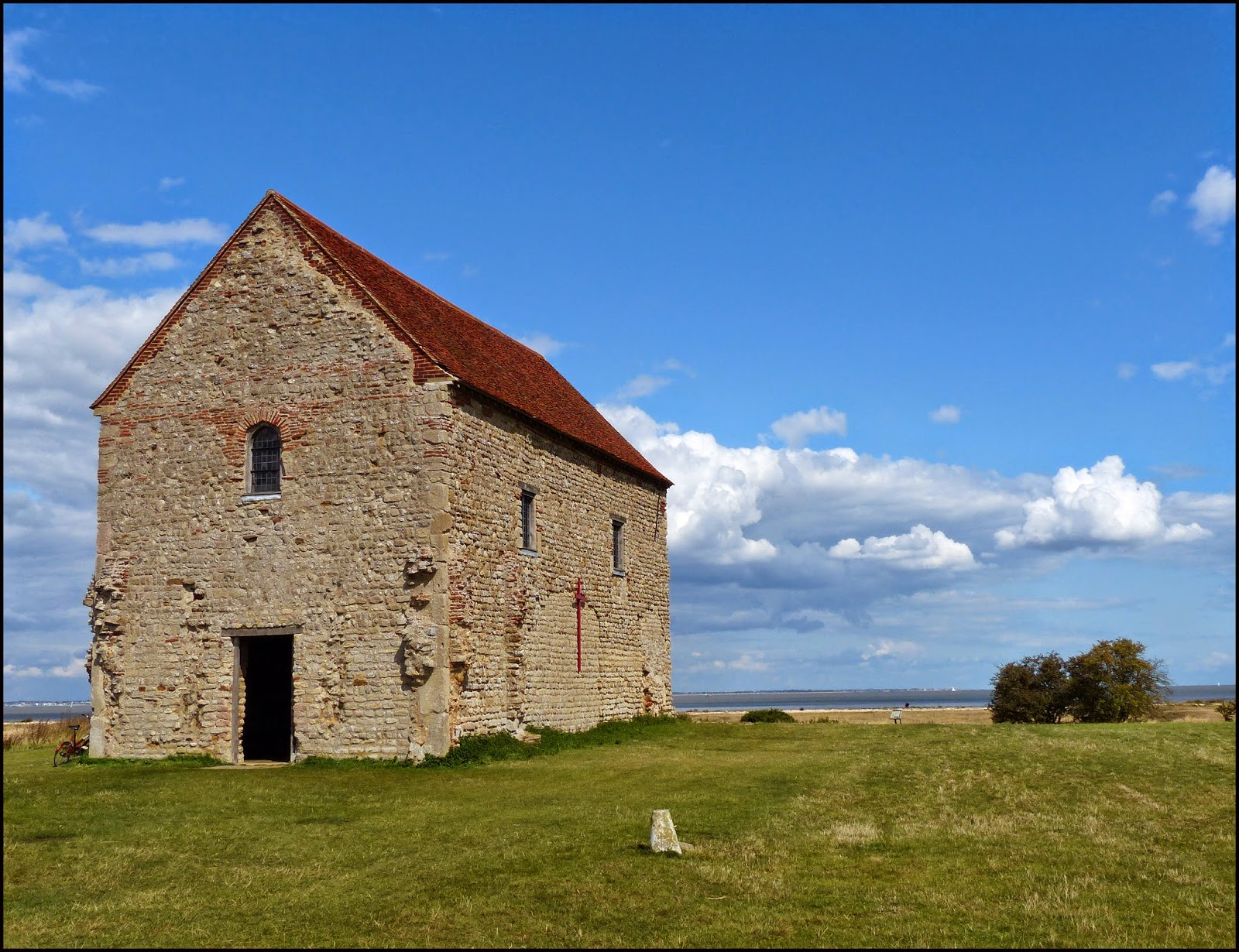 St Peter's is used as a regular place of worship by the Othona Community. 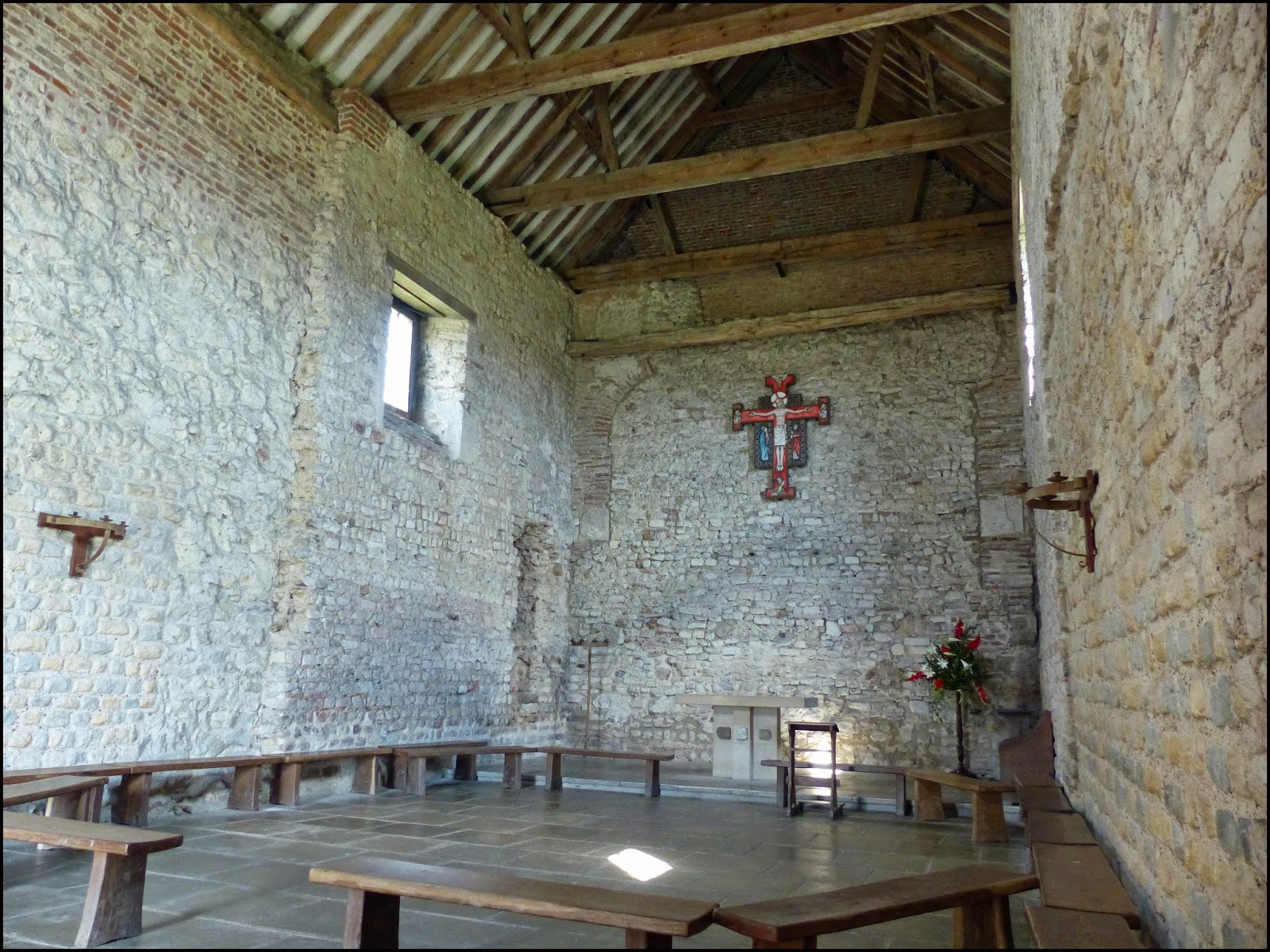 I thought you would like to see inside! There was a leaflet of poems by Trevor Thorn: you can read some of his pieces here. 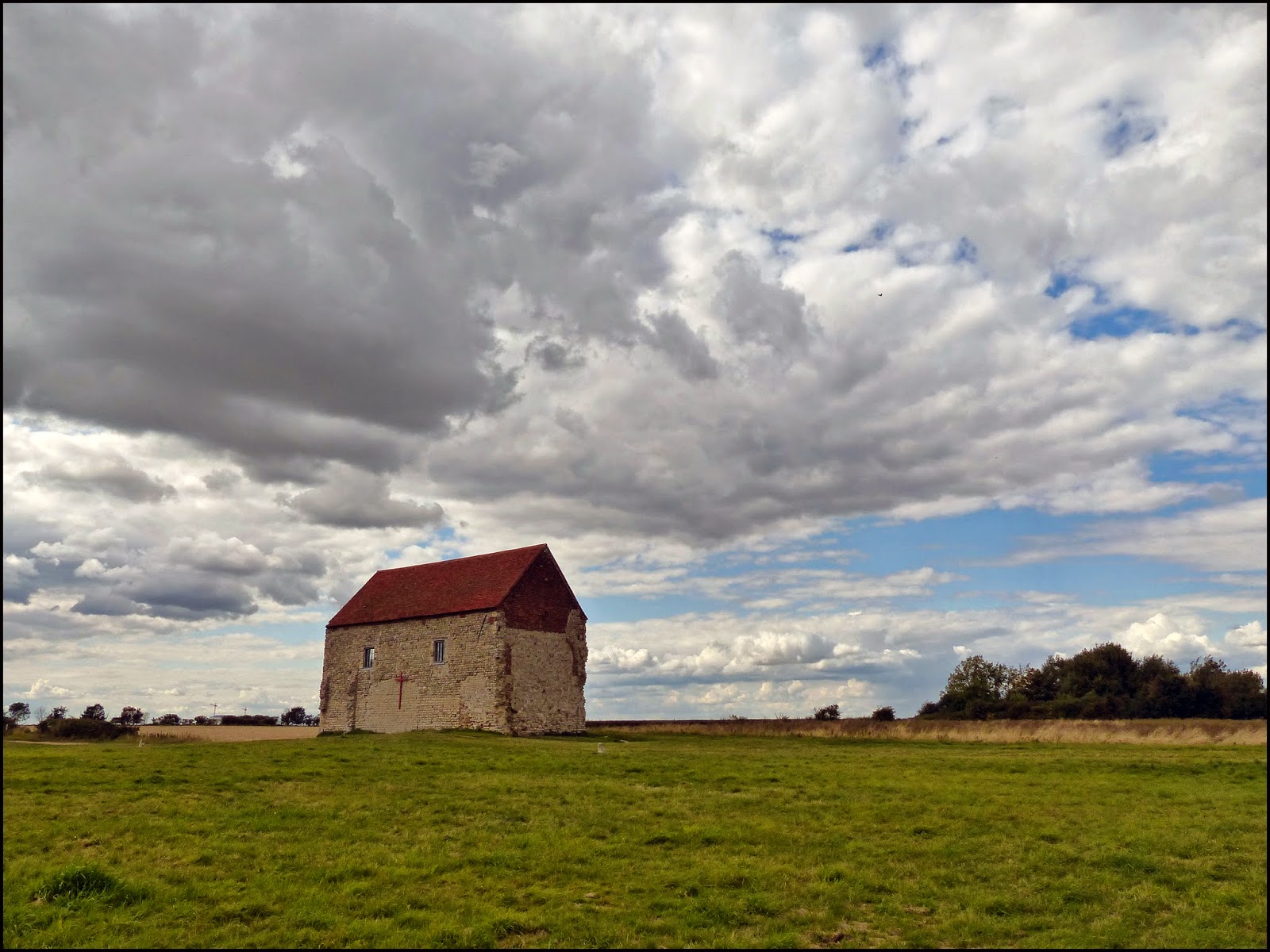 My constant refrain recently has been that August has felt like October! You can see the wealth of autumn berries in the photo below. Walkers are requested to avoid the Cocklespit Nature Reserve and saltmarsh you see in the picture to preserve its delicate ecological balance. The area, managed by the Essex Wildlife Trust, is a site of special scientific interest (SSSI). It is apparently one of only eight places in the country where the rare jumping spider, Euophrys browningi, has been recorded (but see also this Essex Field Club report as to the identity of the spider in question). 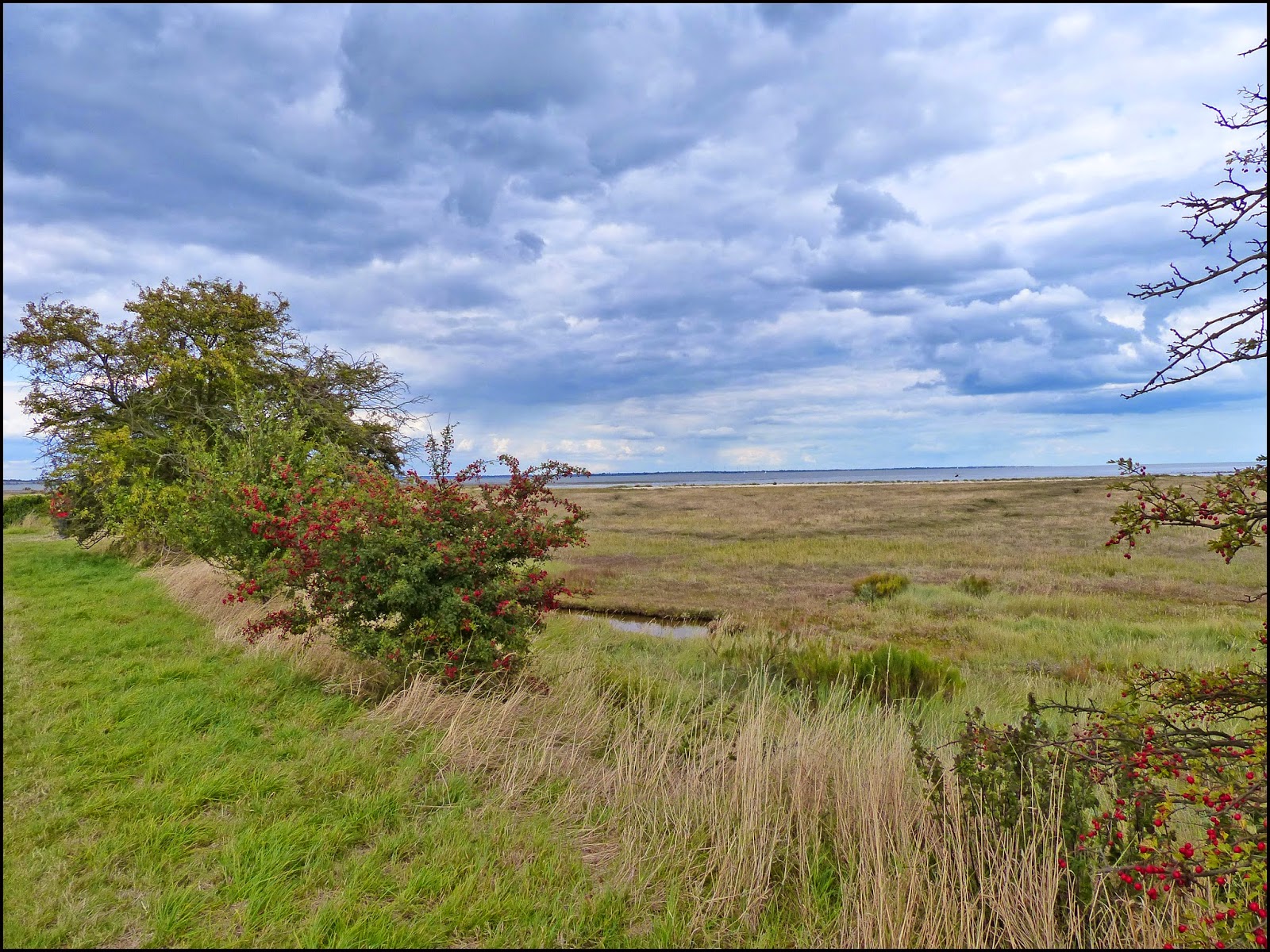 I may have known about the Saxon Shore since my school days but I first encountered the estuary a decade ago through a poem called 'Blackwater' by Lavinia Greenlaw in her collection, Minsk (Faber and Faber 2003). Greenlaw's evocation of the scene came to life in a new way as I stood on the shoreline of this strangely silent corner of Essex. 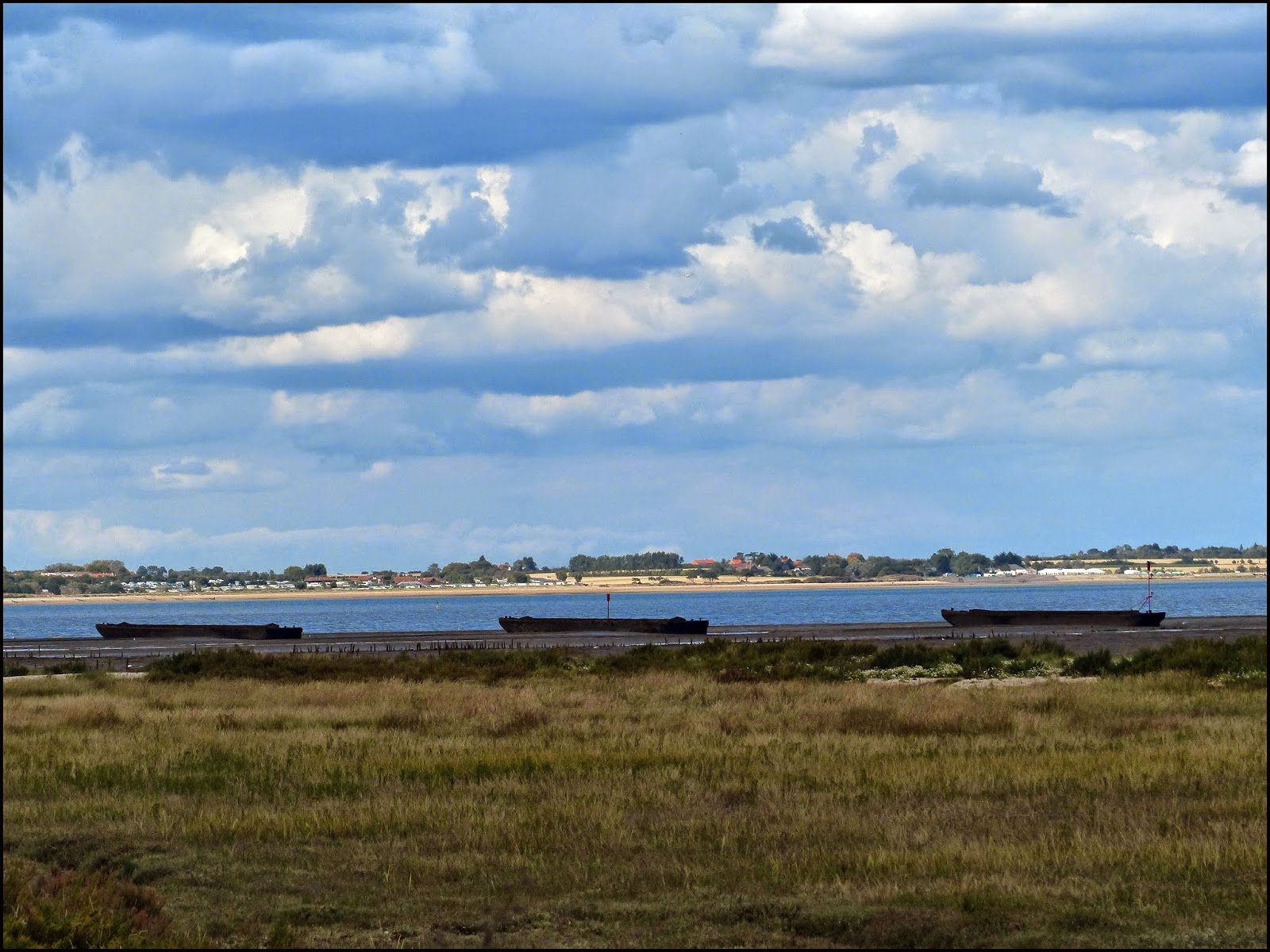 The water may have been a deep blue but the mudflats beyond the bank of shells had a distinctly dark tinge to them! 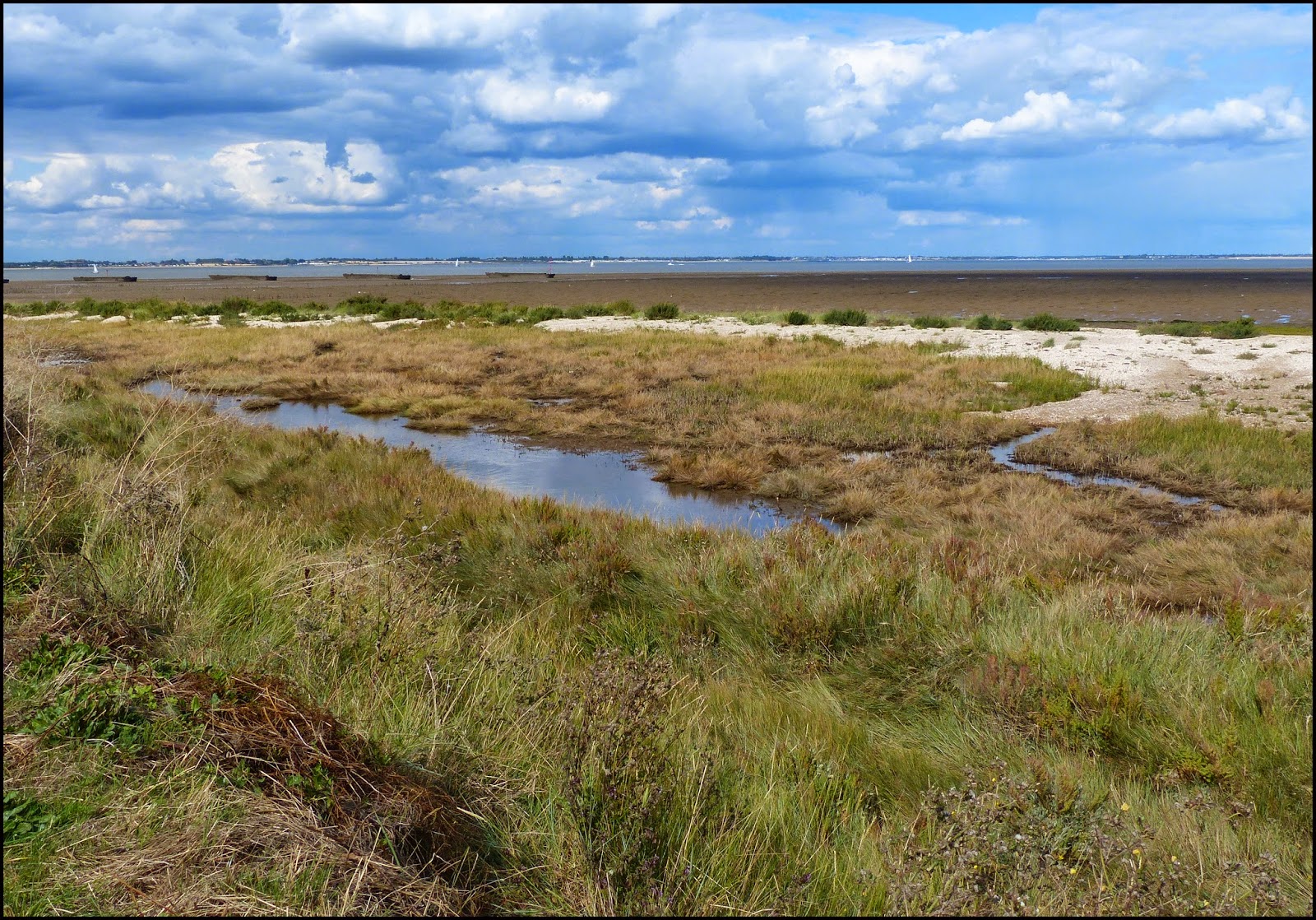 The banks of broken shell reflected the light. We were standing on the footpath when a stoat popped out. It retreated pretty quickly and I failed to get a photograph, but it was good to catch a glimpse of this animal at relatively close quarters. 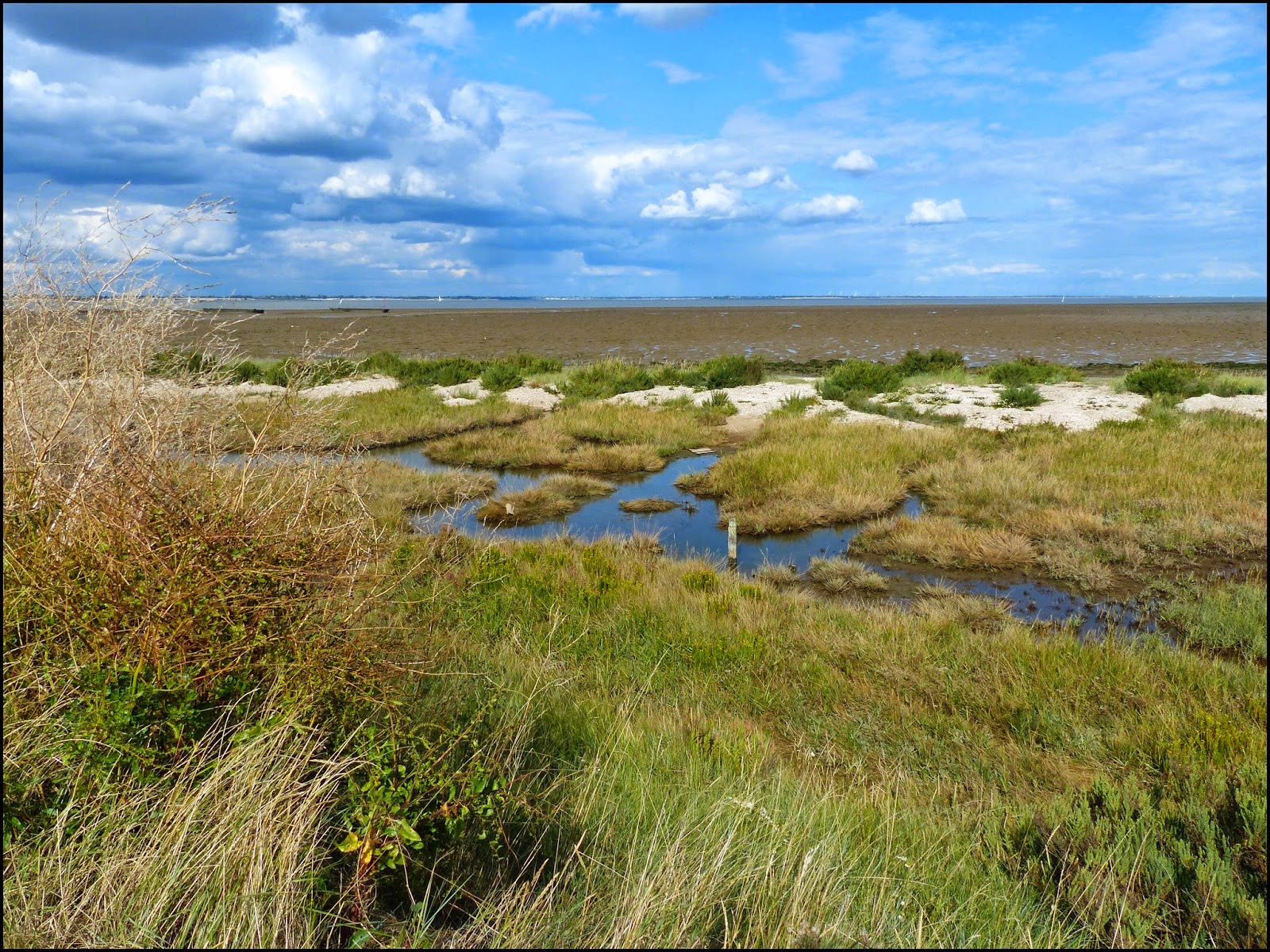 The shore is lined with unusual flora. White butterflies were plentiful and every so often they would alight on these yellow marsh plants. 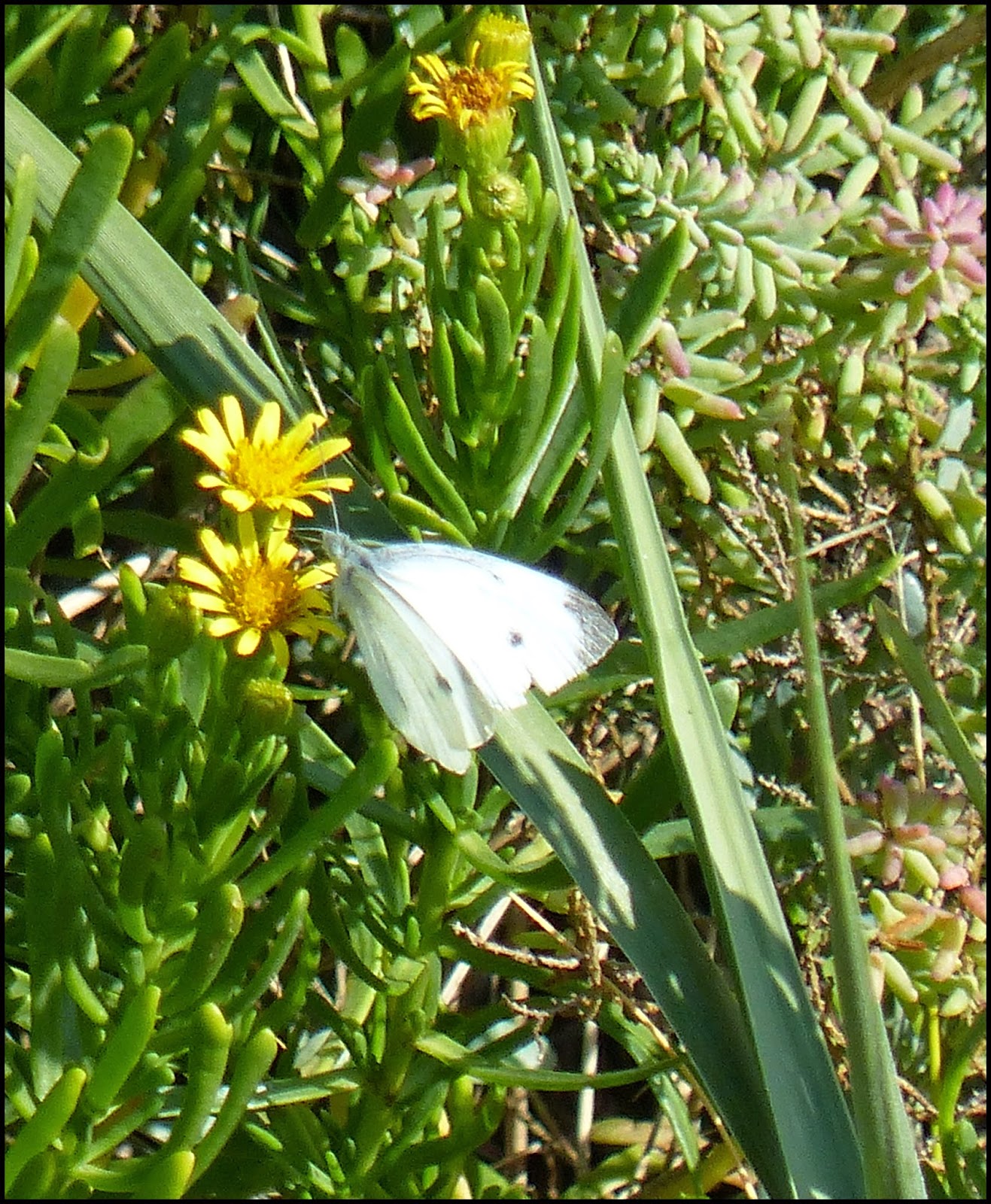 The photo below shows what I assume are - in part, at least - the wooden remains of Saxon fish traps or later substitutes. The Saxon traps were huge contraptions as this extraordinary reconstruction shows. It was soon time to return to the marina for a cup of tea, but I couldn't resist a last look back ... 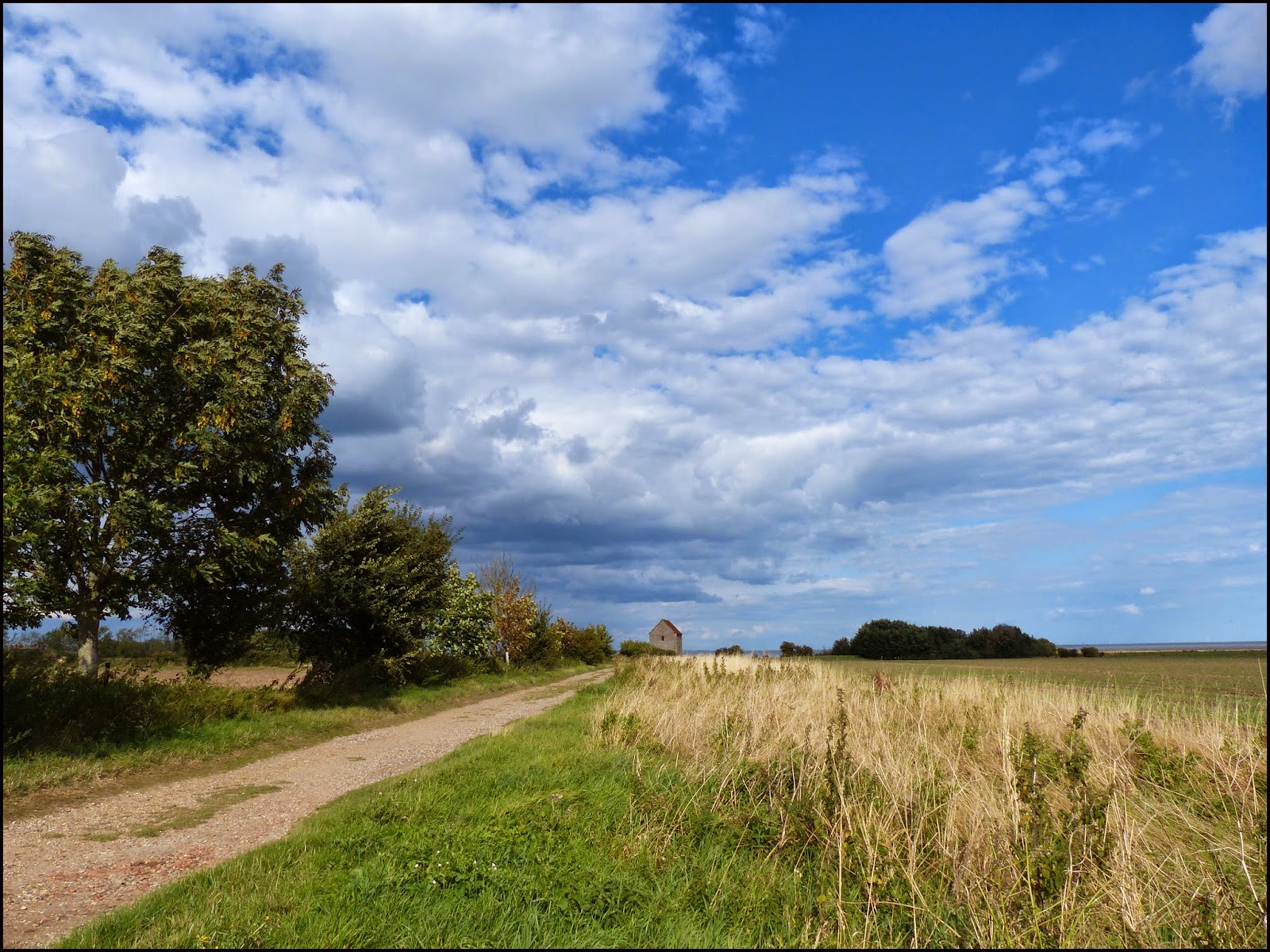 Sites of archaeological interest are very often good locations for wildlife. We had almost completed our expedition when I spotted a Painted Lady, the first specimen I have seen this year - and a rather faded one at that, but lovely to see. 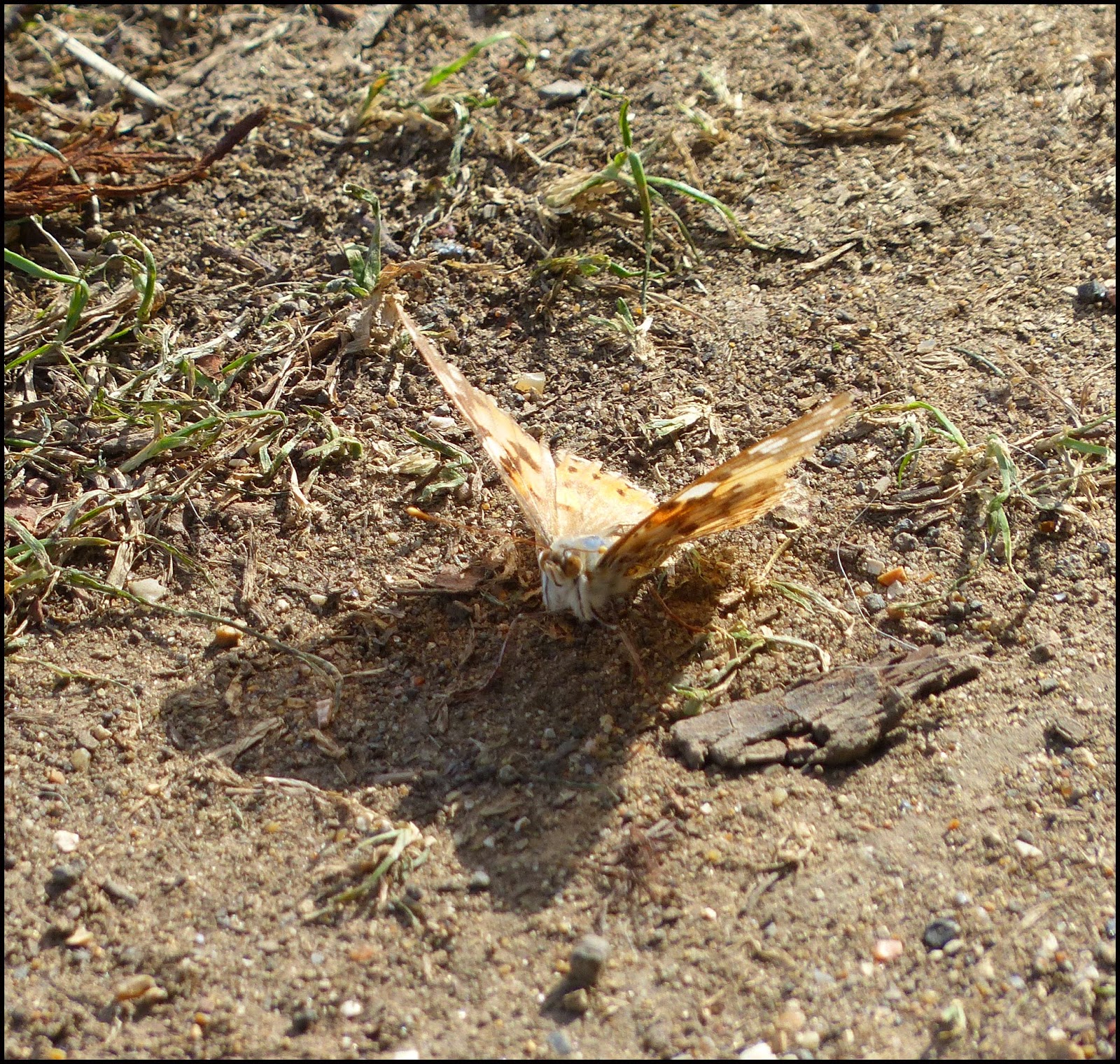 We also saw a couple of damselflies on the brambles. This is a Common Blue ... 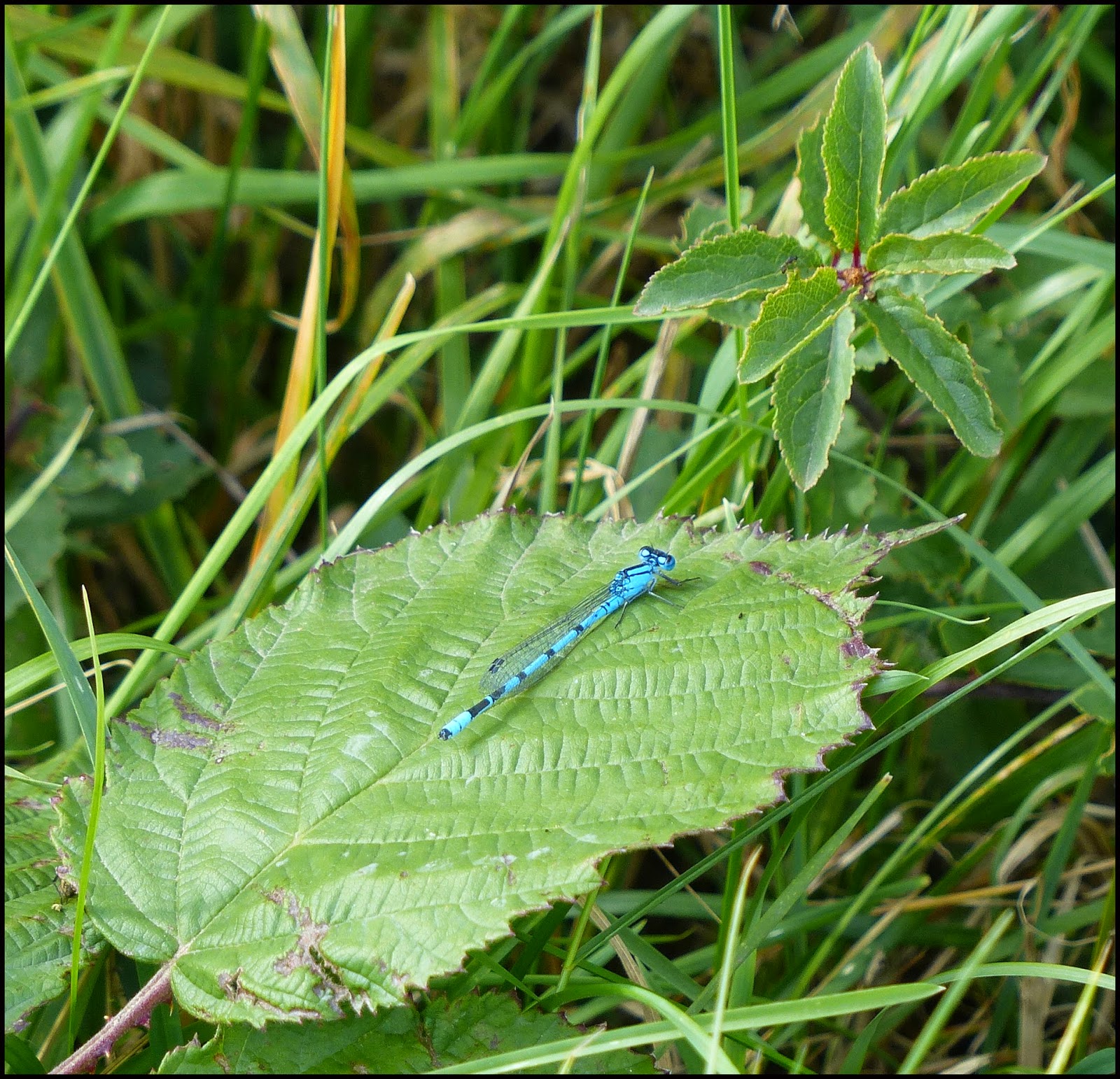 And finally, I noticed this bee alighting on a teasel.

The Othona area is a fascinating place to visit with its wide skies and long stretches of coast inhabited by Whimbrel and other waders. I particularly like the fact that the Roman fort was replaced by a church under Cedd, with his Lindisfarne connections.

Seems you had a wonderful day full of nature and history with beautiful photos to document it. Enjoyed your post very much.

You have taken some very beautiful photos, looks like a realy nice day out..
Amanda xx

I've visited Othona and St Cedd's chapel several times but never once was the sky or sea blue. So now I know the sun there sometimes shines.