We visited Chedworth Roman Villa in Gloucestershire on Wednesday 30 July. It is a beautiful site, with views of the Cotswold countryside and superb Roman remains.

Archaeological sites often offer surprisingly rich habitats for wildlife, and Chedworth proved no exception, as you will see on my lizard and Roman snail post here.

A National Trust worker pointed us in the direction of a large butterfly, initially on the wall and then on the ground, just outside the Visitors' Centre. 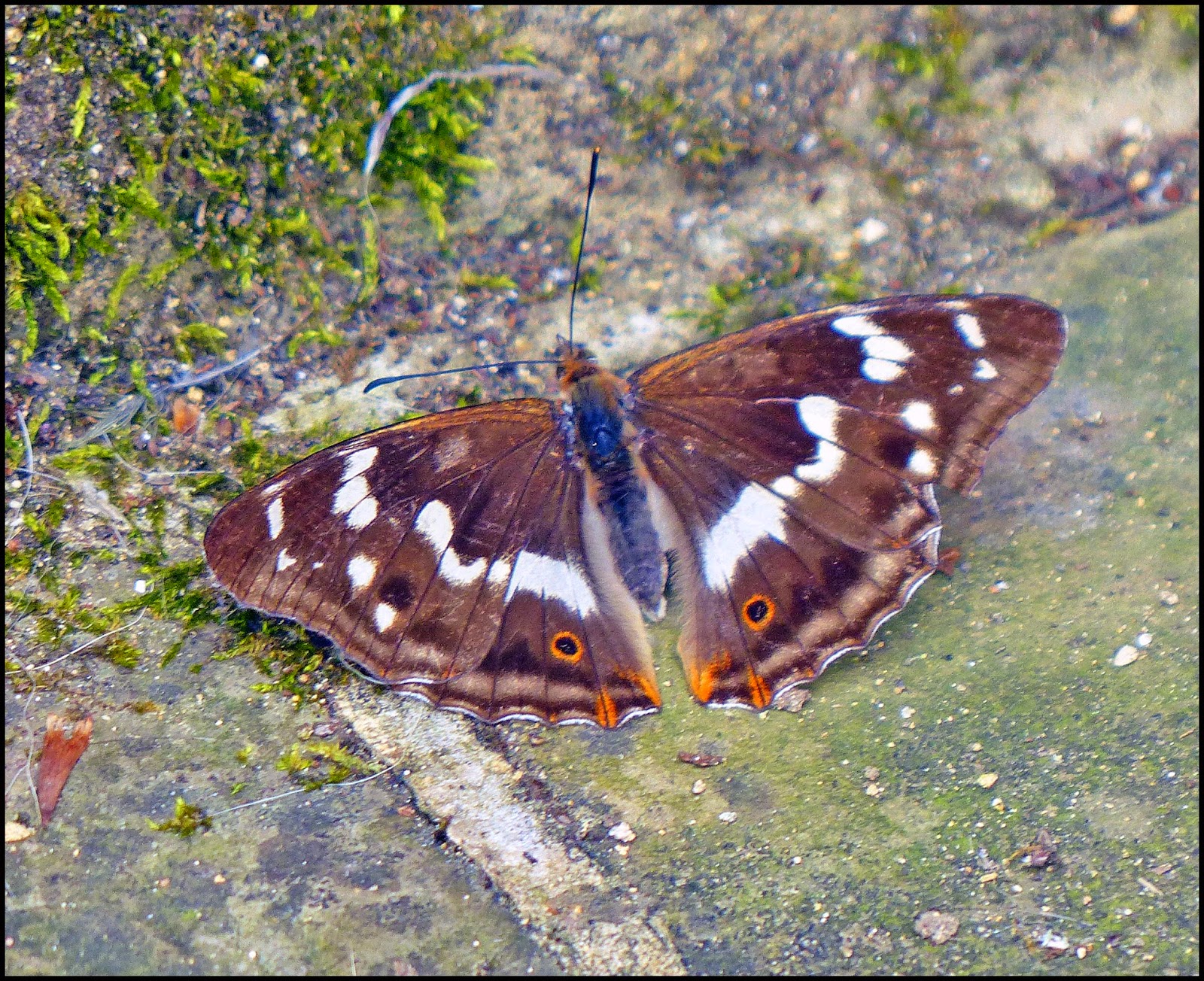 It was a very warm day, and the butterfly appeared to be rather lethargic. As people passed it, on their way in or out of the site, a number of possible identifications were offered. Purple Emperor seemed the most likely although some were convinced that it was a White Admiral. 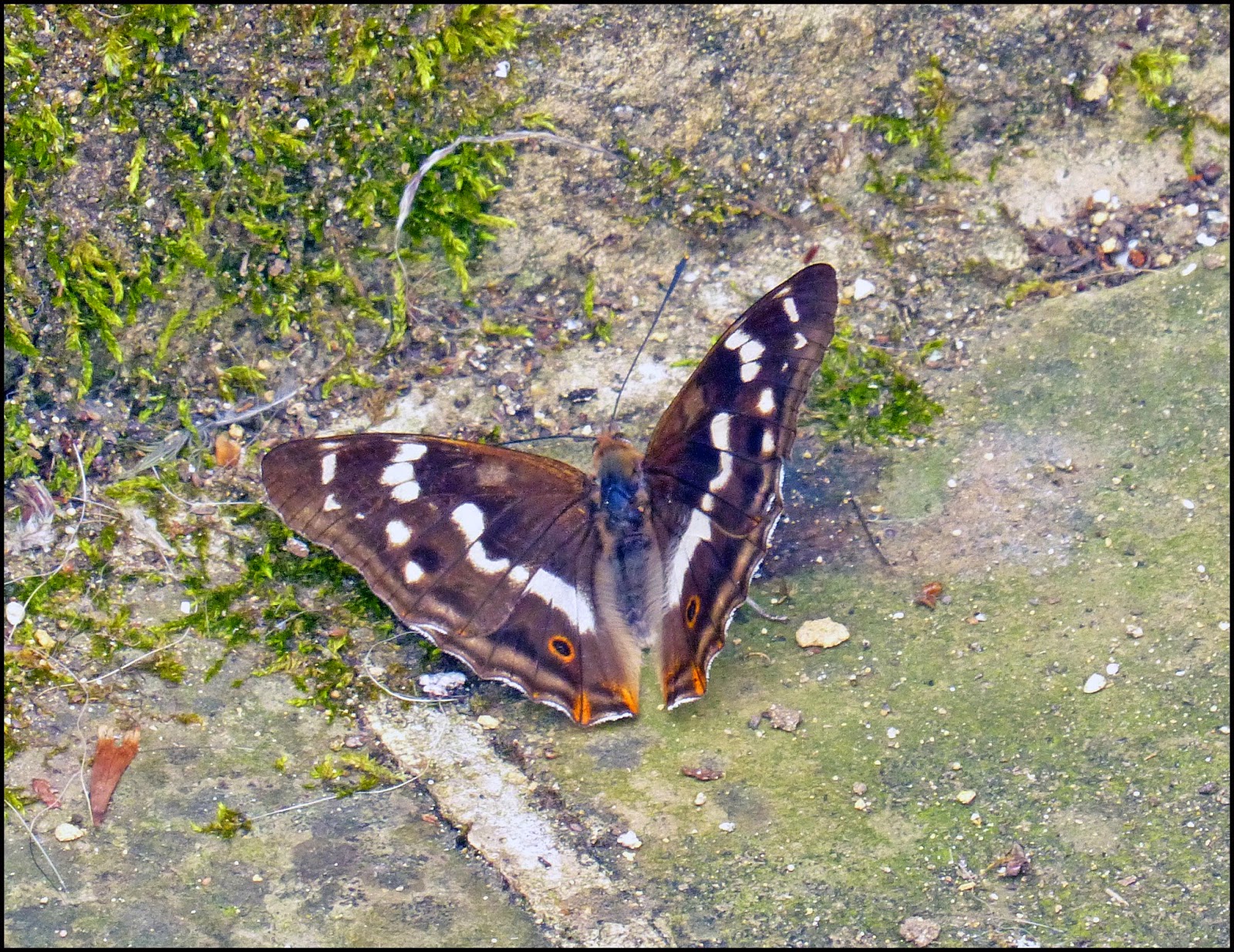 I believe the butterfly was a Purple Emperor on account of ... 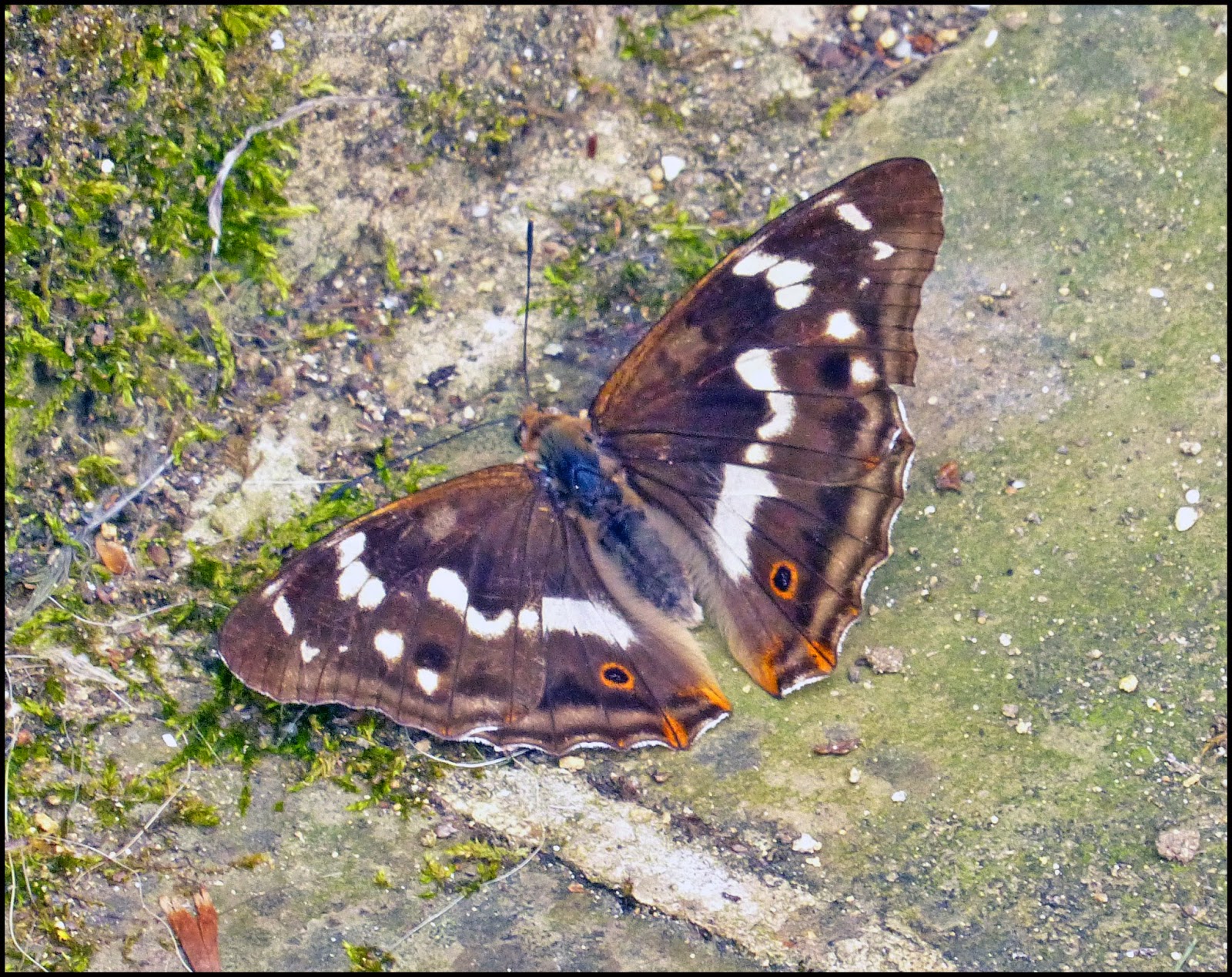 I wondered why the Purple Emperor was not looking 'purple' and assumed the butterfly before us was perhaps a female, which is probably the case. I had, however, overlooked the nature of iridescence which I know a little about from watching dragonflies and kingfishers. The male Purple Emperor has black wings with white markings - and the black pigment only takes on the distinctive and lustrous purple sheen when sunlight is refracted from the butterfly's wing scales.

I have recorded the sighting on the Big Butterfly Count form. From my reading, I reckon we were very privileged to have this unexpected sighting. It seems rather fitting that we were introduced to an emperor at a Roman villa! Just occasionally we find ourselves in the right place at the right time ...

***Postscript***
In case you missed the Comments...

That's the first sighting of a Purple Emperor in Gloucestershire since 1990! And I've looked hard. Chedworth Woods certainly look suitable. Well done and Thank You for turning Gloucestershire Purple, and on NT land to boot!

What a lovely butterfly! I'd love to see a purple emperor

It is a beautiful mosaic. The butterfly shots are great. The outside of the one is really a colorful butterfly for being so brown on the inside wings.

It is a gorgeous butterfly whatever it is. thanks for sharing.

Hi Caroline. It's a beautiful specimen. I think you are correct in your identification. Great photos!!

I love the mosaic and the beautiful butterfly. Lovely photos.

The butterfly is gorgeous, I have not seen one myself but maybe next season :)

The purple emperor is new to me. Handsome butterfly!

That's the first sighting of a Purple Emperor in Gloucestershire since 1990! And I've looked hard. Chedworth Woods certainly look suitable. Well done and Thank You for turning Gloucestershire Purple, and on NT land to boot!
Matthew Oates NT specialist on butterflies and devotee of the Purple Emperor

Thank you for the identification!