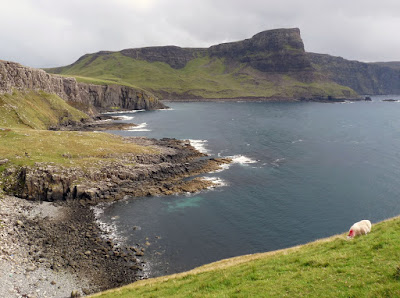 We visited Neist Point on the western edge of Skye
during the afternoon of 27 June 2010. 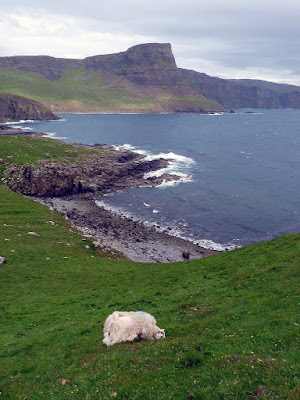 I remember it well because I had a bad fall
and fractured my ulna.
It has taken me until now
to want to write about our visit.
[I will refrain from saying my 'trip'...]

There used to be a winch in use
for shifting lighthouse supplies
up and down the steep rock face. 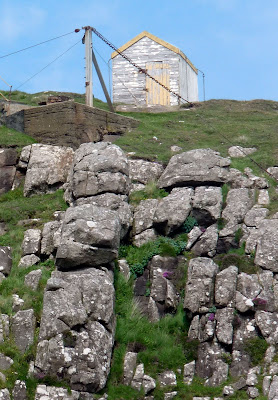 I sustained my injury on the path at the bottom,
and could have done with a winch to get me back up to the top!
Alas, it was not to be. 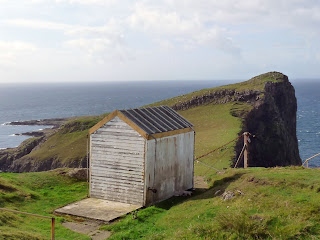 The view from the top is stunning ... 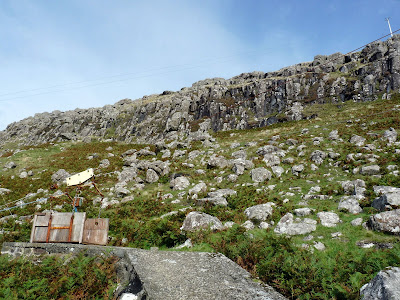 ... and this is the view from the bottom.
The winch platform has seen better days. 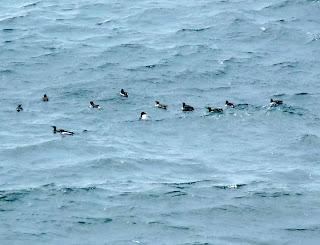 Thankfully my accident took place at the end of our visit.
Before that memorable moment, we had enjoyed watching
this raft of Guillemots. 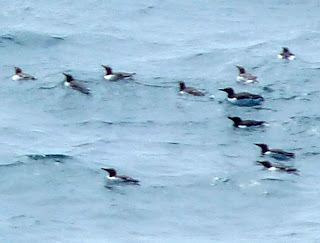 I had thought they were Razorbills at the time,
but now that I have been able to enlarge my photograph,
I suspect they are Guillemots,
which have more rounded heads in profile. 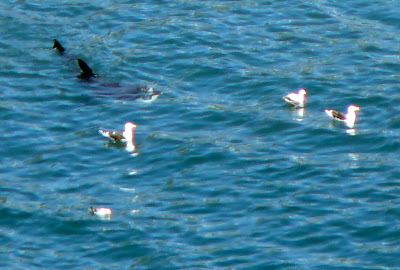 The photograph above was taken on a previous occasion,
when sea conditions were calm.
The waters around Neist Point are well known
as a favourite haunt of Basking Sharks and Whales. 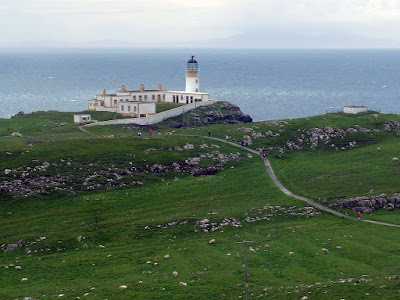 We enjoyed walking out towards the lighthouse:
you can see the misty shapes of the Outer Hebrides in the distance,
way out in the Minch.
The light can be seen from a distance of 25 miles.
The lighthouse complex was constructed in 1909
under the engineering expertise of David A. Stevenson,
from the famous dynasty of lighthouse builders.
The last lighthouse keepers left in 1990.

Two large dark sea birds flew over:
they might have been Skuas. 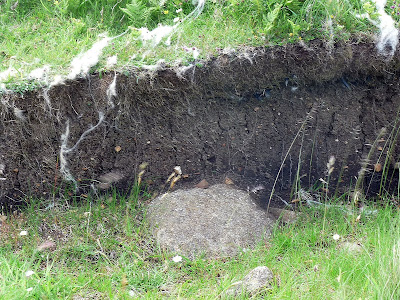 No prizes for guessing who has made a shelter here! 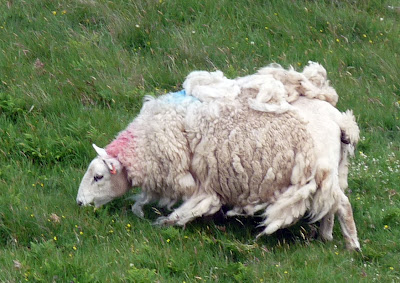 The sheep have thick coats to insulate them from the elements. 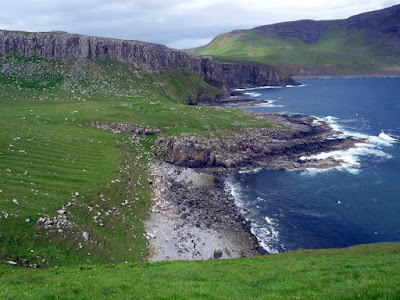 This photograph shows the Runrig strips of cultivation,
or 'Lazybeds' as these are known on Skye.
During the Clearances [see also here],
the crofters were 'cleared' off the best land
and banished to the edges of the earth,
where soil was often poor
and weather conditions extreme.
It must have been an unbelievably tough existence
in isolated corners,
where gales blew in with tremendous force.
These days the land consists of Common Grazing for livestock
belonging to the residents of Waterstein. 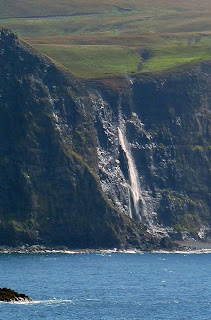 You can see the rainwater
pouring off the land in this jet of waterfall ...
and this is on a rare fine day. 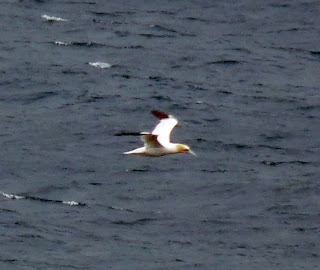 Neist Point is a good place for watching Gannets. 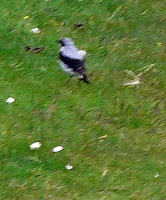 We also spotted a number of Wheatears
on the scrubby turf. 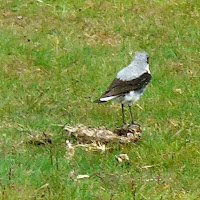 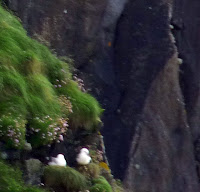 Nesting birds preferred the craggy ledges in the cliffs. 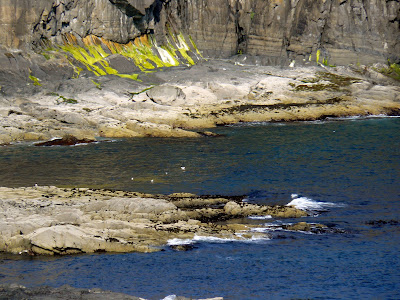 The colours were spectacular at times. 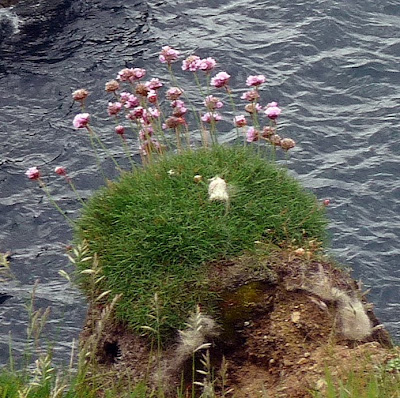 There were colourful patches of Thrift ... 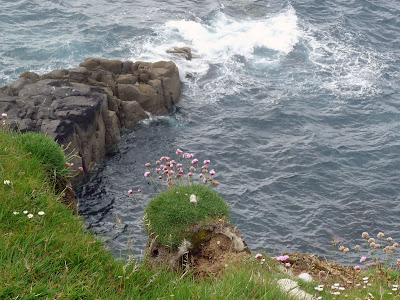 ... on the cliff edge.
We watched a seal in the water below,
but each time I tried to photograph it,
the creature dived! 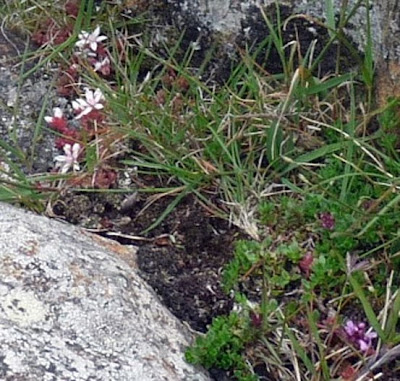 Plants have to be hardy.
There were clumps of Heather
in addition to the Stonecrop [or is it a Saxifrage?] illustrated above. 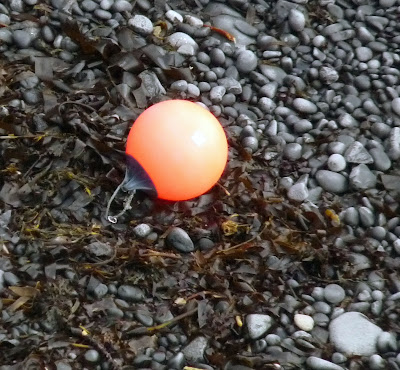 A fisherman's float added a splash of colour
to the pebbled shore. 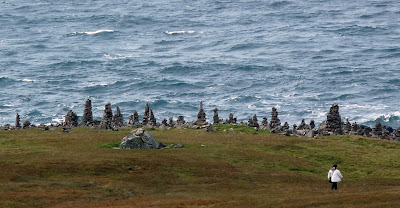 Humans have a knack of leaving their mark
wherever they go. 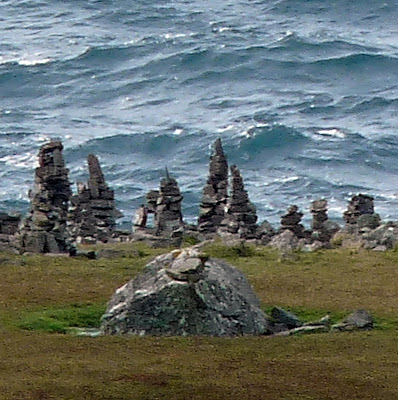 The extreme edge of Neist Point, near the lighthouse,
is covered with this strange display of cairns.
I can't help wondering if it wouldn't be better to
'take only photographs
and leave only footprints' ...
Posted by Caroline Gill at 23:06

Skye is a beautiful place. i wish i could see this in person someday. you're so lucky to have all this scenery around you. wonderful photos, btw. stay well and have less 'trips'.

Carol I hope you're on the mend now. You've shown me more reasons with these incredible photos why I should go up to Skye - its only about 4 hours drive from here......... someday I'll get there.

Beautiful place and such wonderful photos! I'm sorry such a pretty place resulted in injury for you! I love that photo of the clump of flowers on the cliff's edge. Nice new blog!

caroline what a rugged and beautiful place in which to hurt yourself. really that's a shame but it obviously didn't affect your appreciation for and ability to capture the truly stunning scenery!! get well soon. steven