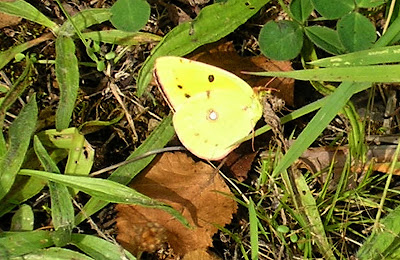 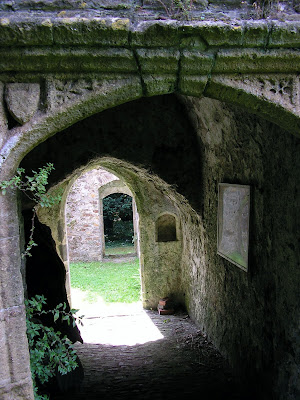 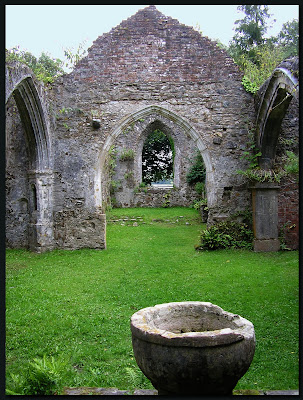 Slebech
I have been meaning to post this butterfly photograph on my blog for some time, but it has taken me until now to identify the species. I am still not sure whether it is a male or female, but I think it is a Clouded Yellow butterfly.

Clouded Yellows migrate from the south of Europe and the north of Africa. They have been known to overwinter in the south of England. Apparently it is rare to see the dark wing borders when the butterfly is not in flight, as it rests with its wings together. I can't remember whether this particular butterfly had just touched down when I clicked the camera. The caterpillars are sage green, with a white stripe running along the side.

We spotted this particular butterfly on our way to the 12th century ruin of Slebech Old Church, a building dedicated to John the Baptist, and vested in the 'Ancient Order of St John of Jerusalem'. The Order was dissolved in 1540. In 1955 the church and its land were gifted to the Priory for Wales of the reconstituted Most Venerable Order of the Hospital of St John of Jerusalem. It is the resting place of Sir William Hamilton, K.B. (1730-1803) and Catherine, Lady Hamilton (1738-1782). Sir William was British Envoy in Naples in the 18th century. He was a vulcanologist and also an expert on Classical vases. Catherine, his first wife, was the daughter of John and Anne Barlow of Slebech. She died in Naples.

The path to the graveyard runs beside the creek. It was swathed in dapple shade when we were there, with clover, blackberries, teasels and other plants along the verge - making it a butterfly haven.

P.S. I am grateful to Mary of Faith, Fabric and Photos in Indiana for pointing out in her comment below that her photograph (here on her blog banner) is of a Clouded Sulphur butterfly. There are more Clouded Sulphurs here on Ecobirder's blog. There is, I see, also a variety called the Cloudless Sulphur.

What a pretty photo. A joyful way to start my day!

It does look like the same butterfly and I think we call it "Clouded Sulphur" so I'm sure it is the same! I love all these photos...what a fascinating looking place to explore! The second photo is wonderfu!

i love those pictures of the old church and the background you shared with us. fascinating. and thanks for directing me to faith, fabric and photos. she has a nice blog. hope you're taking care of your arm. have a great night.