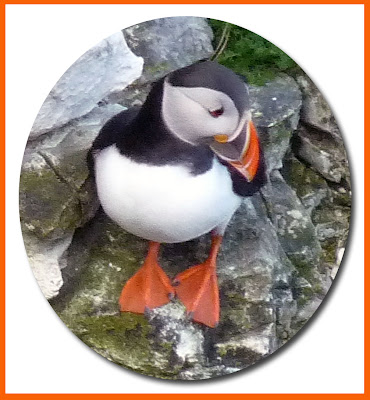 Those who follow my blogs will know that the Puffin is probably my favourite bird, though I have been greatly enjoying the Little Penguins on the television programme, Penguin Island, narrated by Rolf Harris.

I recently blogged about humans eating Puffins on the Shiant Islands, but the RSPB has issued a report about adult Puffins attacking a young one at Sumburgh Head on Shetland. It may be that the chick-less, would-be parents are venting their frustration on the Puffling. You can read more about the story here. Thankfully, despite the attcks by 'ASBO Puffin', the youngster was strong enough to fledge on 11 August 2010.

It's a beautiful bird. And visiting you is an opportunity to see the wild and the wonderful from your part of the world.

Thank you for stopping by my blog. I'll be checking out the link again.