Grayling and other Insects on Sutton Heath (near Sutton Hoo)


We have been exploring what for us is a new corner of Suffolk this weekend. We know the Sutton Hoo site pretty well, but had never discovered the lie of the land at nearby Sutton Heath ... until yesterday. We liked what we found so much that we returned this afternoon and were treated to a remarkable aerial display by Grayling butterflies.

The Grayling is not a butterfly we see very often at all; and in this year of C-19, I had begun to think that, along with other wild things such as bluebells, tadpoles and demoiselles, it was going to be just one more species that would have to wait for a future year. How wrong I was. But I had almost forgotten just how camouflaged these Graylings can be when they are not on the wing against a blue sky. 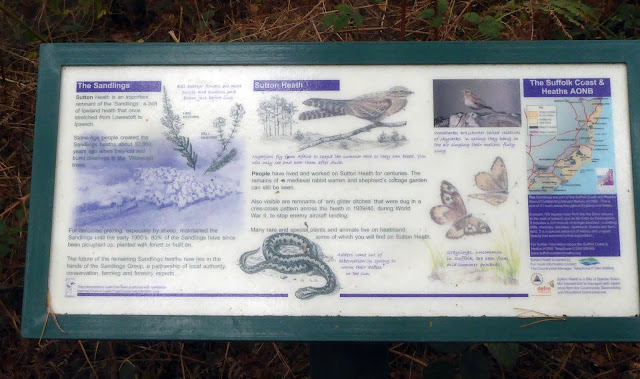 When you visit a new place, I always find it helpful when there is a ready made guide. This information board may have been a bit faded, but it told us about Nightjars, Adders and about the different kinds of heather that one might encounter on this site in the Suffolk Sandlings.

We followed the marked-out trail and were soon heading into the forest, where we saw conifers, rowan, oak trees, chestnut, silver birch and holly. 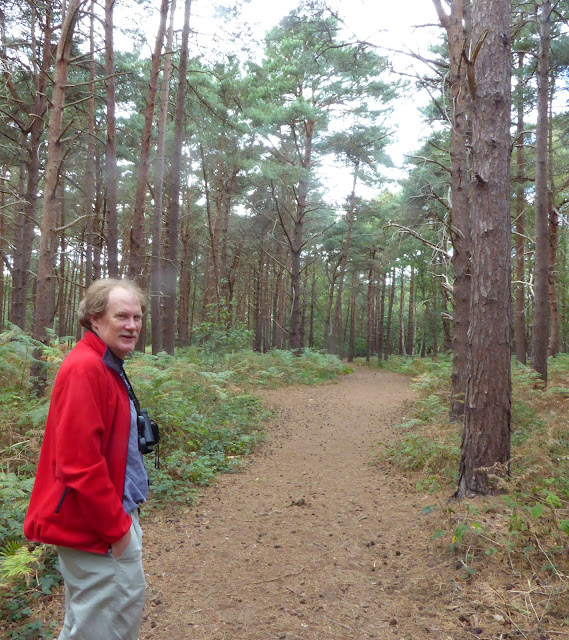 After a short time we found ourselves in dappled sunlight, and began to wonder if the forest was about to give way. 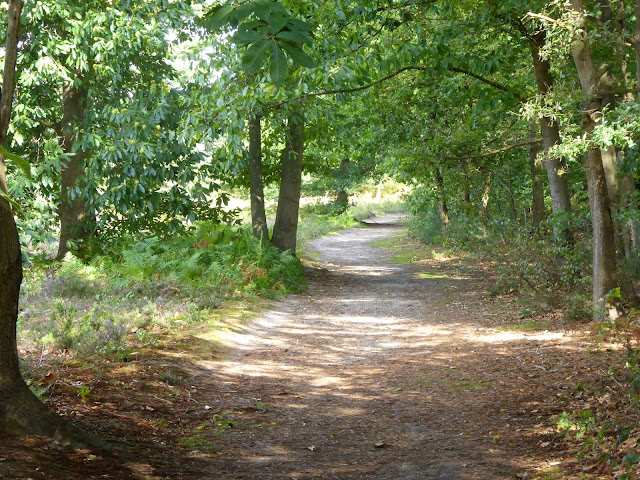 Having seen an Elephant Hawk-moth caterpillar near our home on Friday, we checked the Rosebay Willowherb carefully, but failed to see this distinctive larva on the heath. 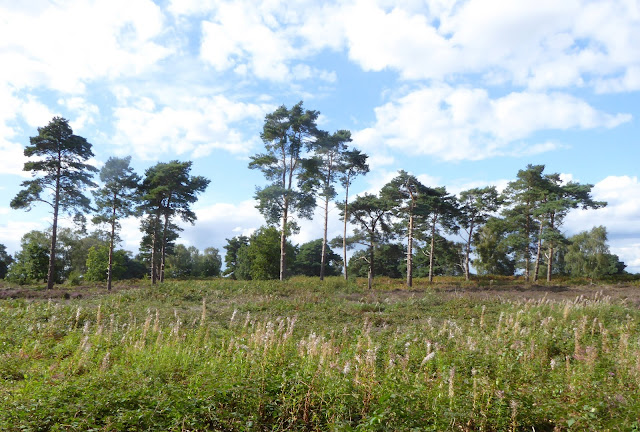 We came across a Buddleia, presumably a self-seeded one, in a clearing with benches, and there beside it was this Red Admiral. 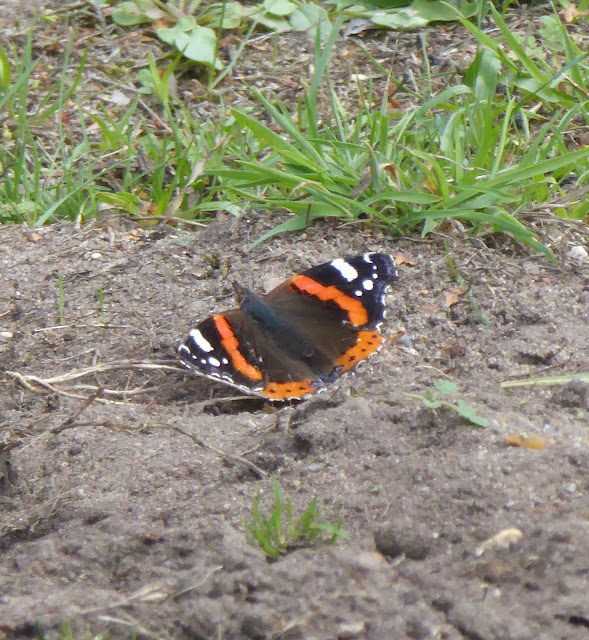 This grasshopper was spotted in the same place, hopping about on these dead oak leaves. 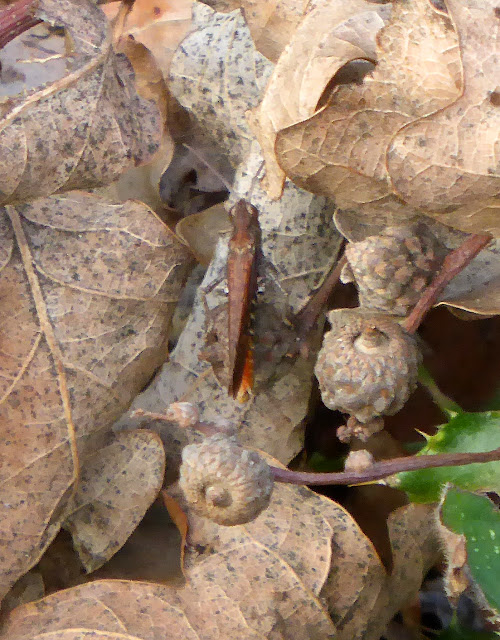 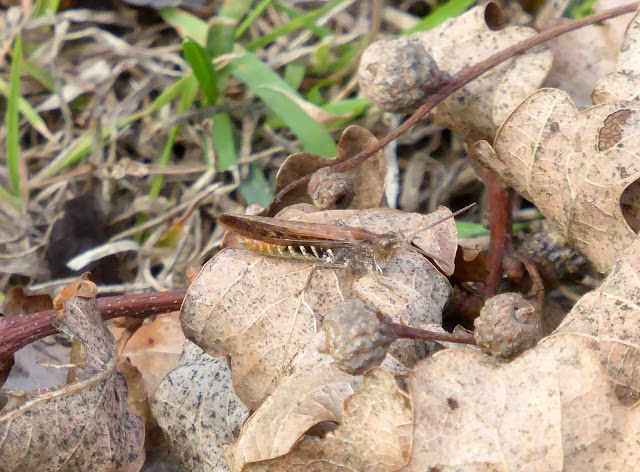 The butterfly in the photo below is a Small Heath, a species we see not infrequently in this part of the world. It is very small. 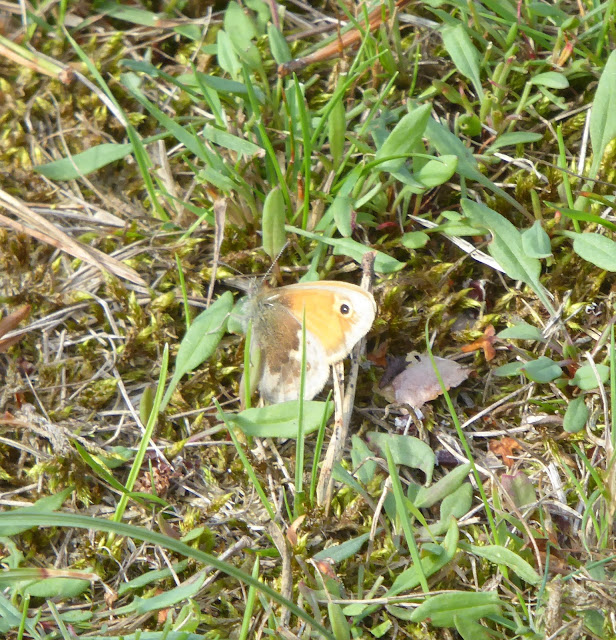 I mentioned above that Rowan was one of the species of tree we noticed. 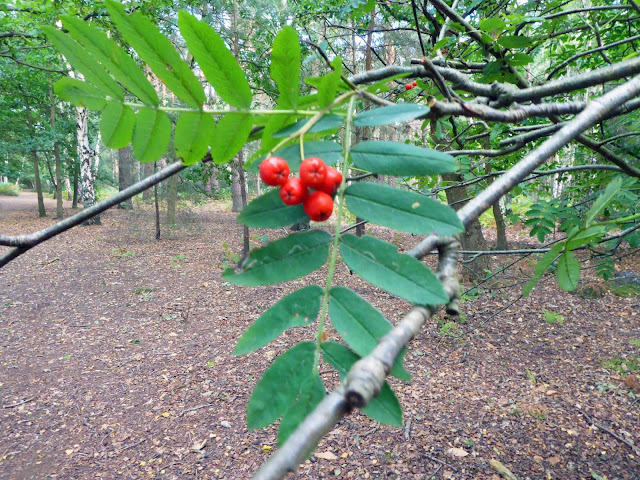 The view below gives an impression of this mixed habitat, with heather giving way to bracken, which in turn gives way to more heather and bracken before you reach a stand of silver birch. There is also a large conifer, and what looks like an oak in the foreground. 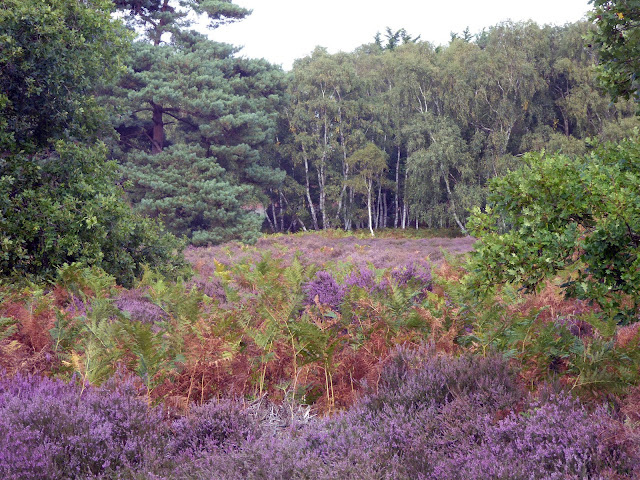 These may not be the Scottish moors, but we can't really complain, can we? 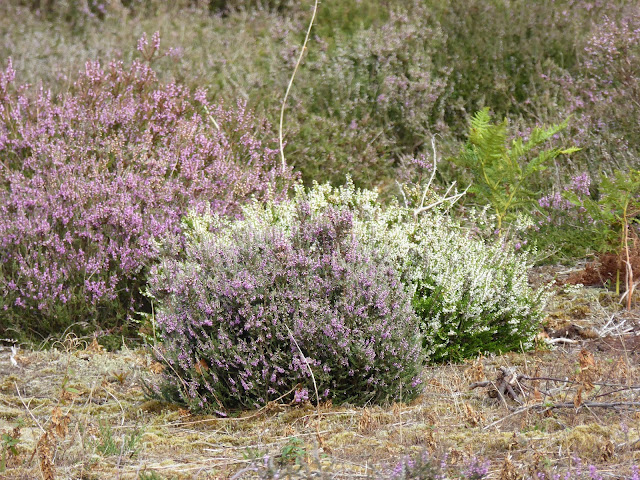 We were keeping a sharp eye out for more Grayling butterflies when we noticed this sand wasp, possibly the Red-banded Sand Wasp. We see these from time to time, but had not seen one for ages. 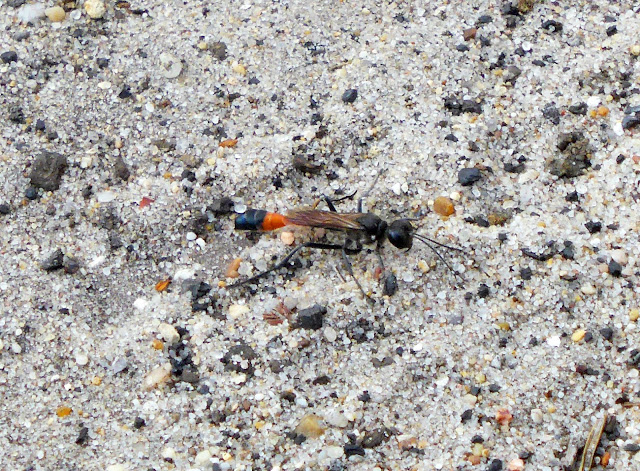 I'm not quite sure what it was doing on this bit of dead vegetation... 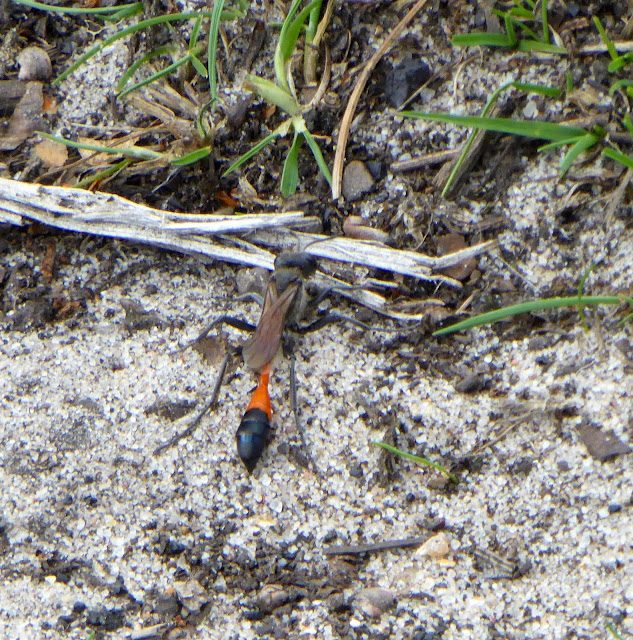 I particularly like the way in which the Grayling in the photo below barely shows up beside the pine cone. In a recent post I featured the Spider Wasp, with its unmissable yellow stripes. How strange that that particular insect should protect itself by mimicking a very visible wasp while this butterfly should use camouflage. 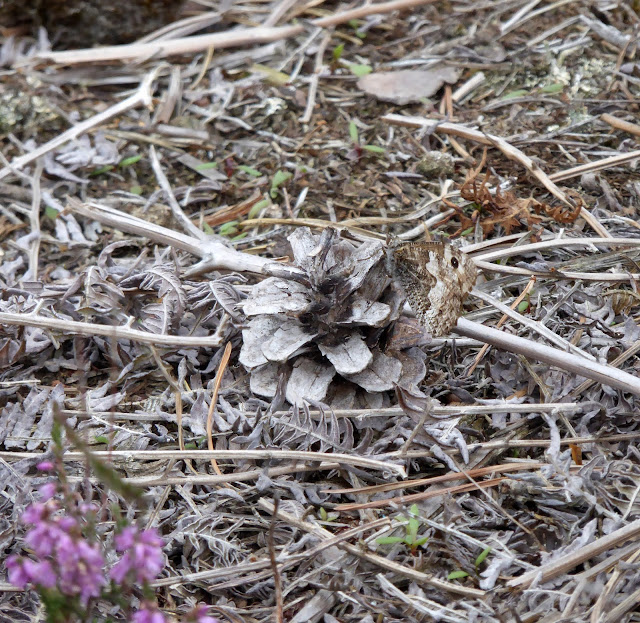 Look for the legs in the photo below... 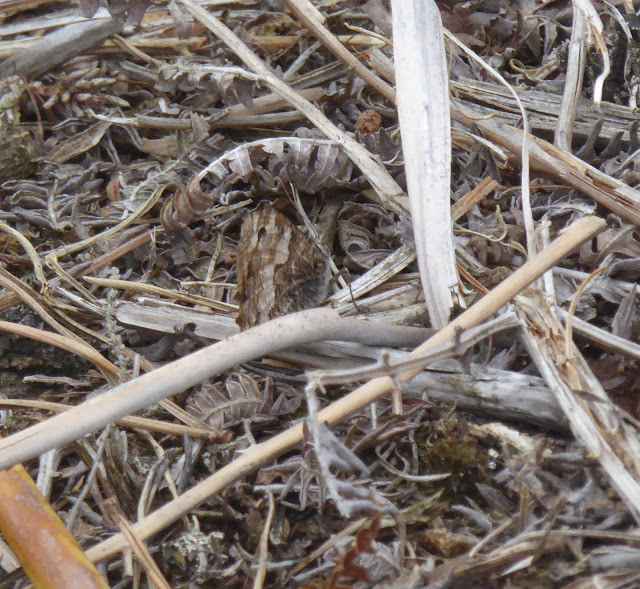 The undergrowth here on the sandy heath is made up of dead bracken, old acorns, bits of bark and old stalks. 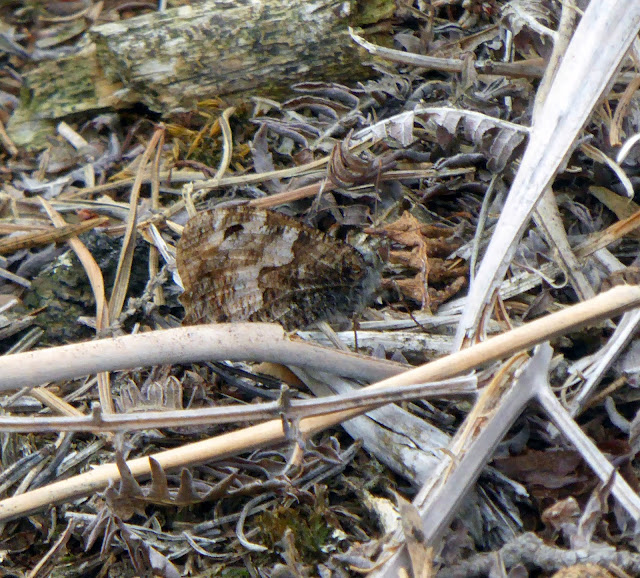 In total contrast, this tiny caterpillar could hardly be missed! Is it a species of (?pine) sawfly? 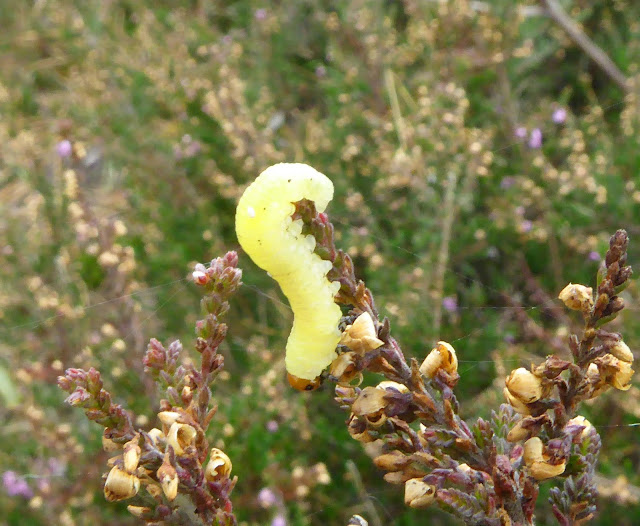 We noticed two snails (or shells) in close proximity to one another. 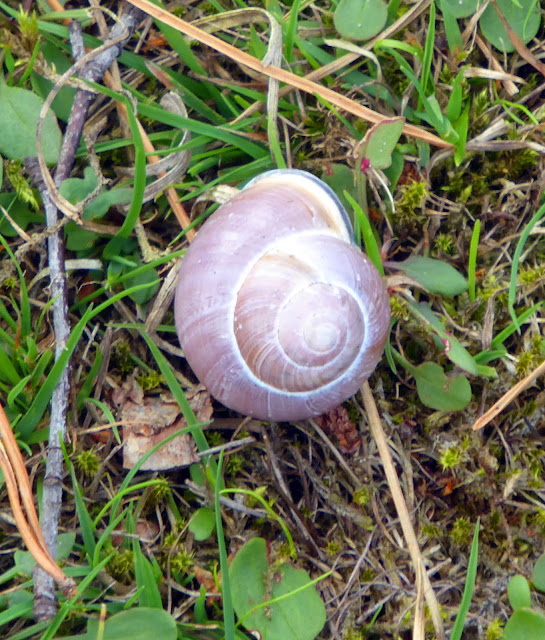 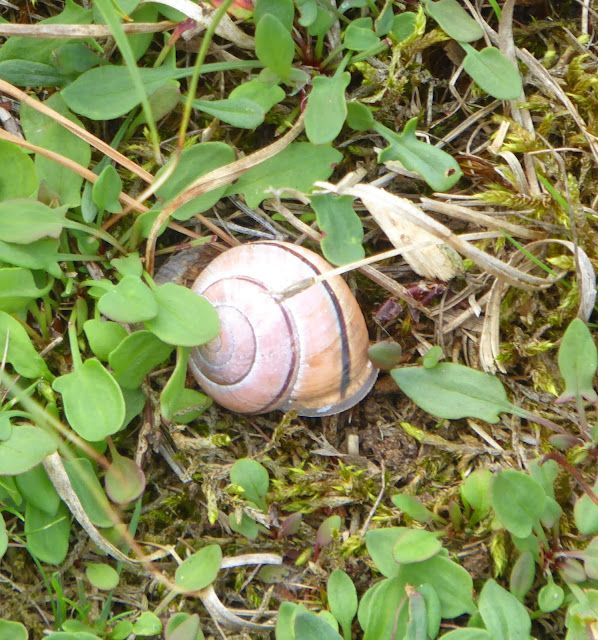 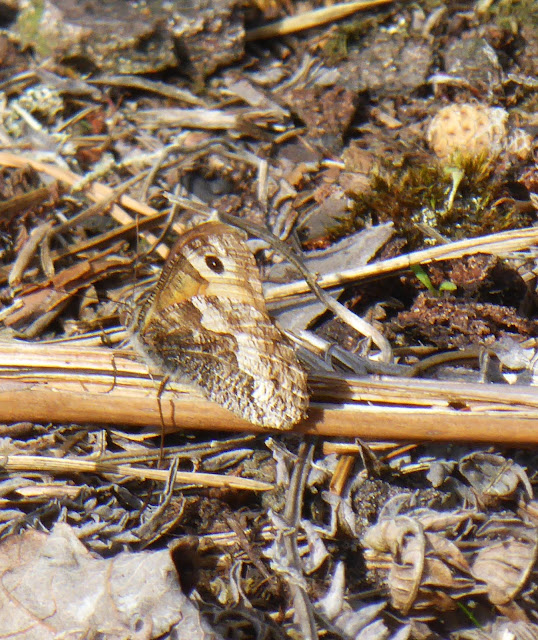 It was a joy to watch the butterflies in a little glade. We had not seen Small Coppers (below) for some weeks. 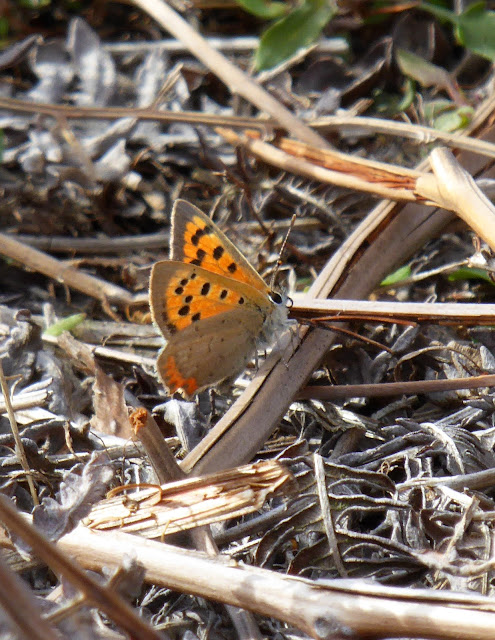 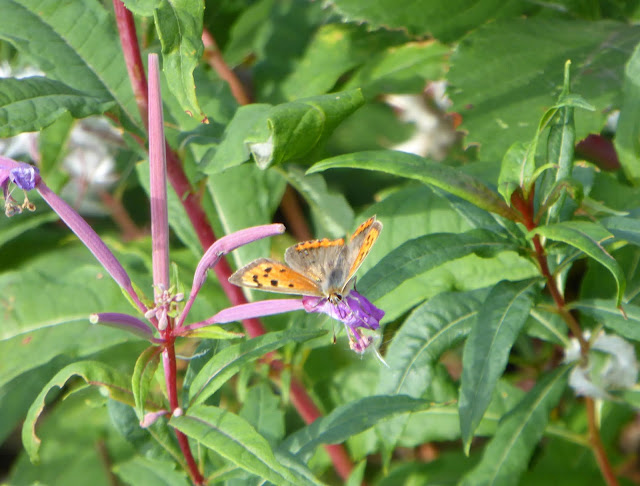 This is certainly a place we are glad to have found. And it feels good to add the Grayling to my list of butterflies seen in this strange year. 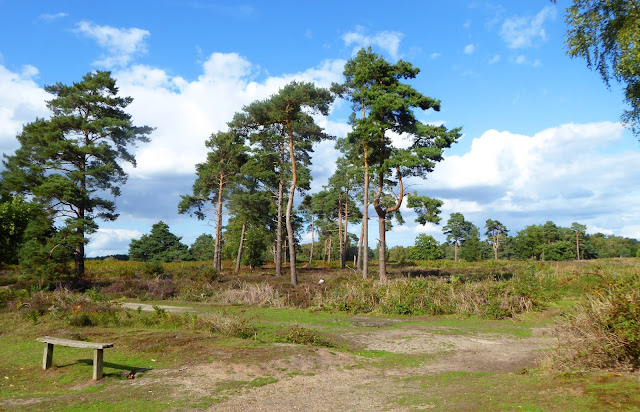 Looks like you had a lovely walk Caroline! Lovely to see graylings, they are incredibly well camoflaged as you say! I've seen a grayling this year but no small coppers (which usually we would see) or small heath (which for us are rarer).