Northern Holiday 2018, Post 3: The Mull of Galloway in Scotland 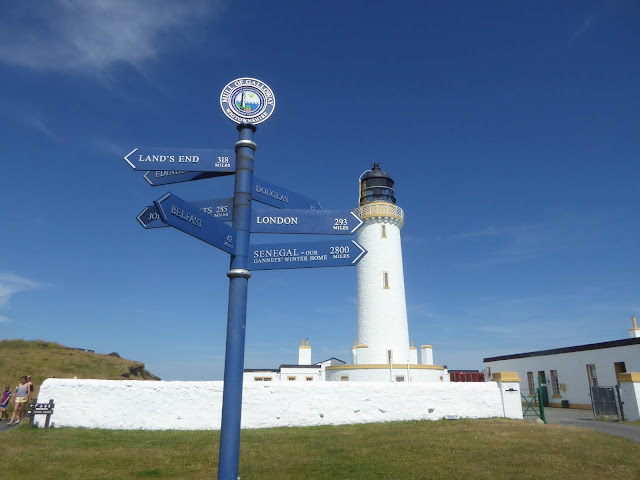 We love places 'on the edge', and the Mull of Galloway in Scotland at the southern tip of the Rhins peninsula qualifies as just such a location. If you are wondering about the destinations on the signpost above, we reckon the Lands End sign has had a bit of a turn! 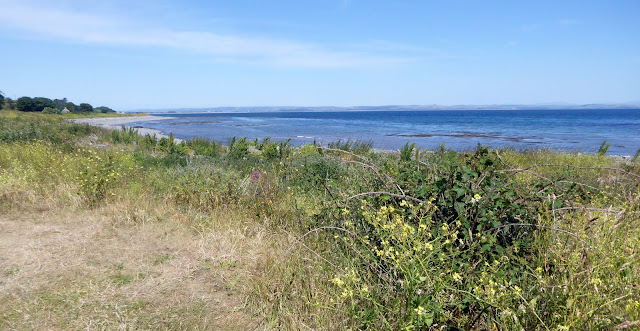 The peninsula is about 30 miles in length. We stopped here at this beach near Ardwell for a picnic lunch, and enjoyed watching some swimmers with their floating gear. 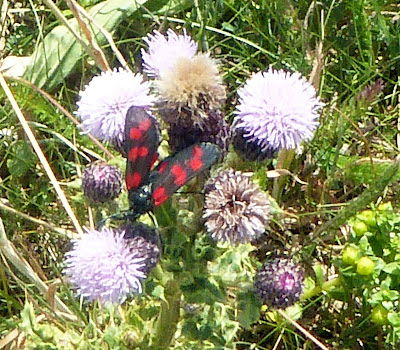 There were a number of Six-spot Burnet moths hatching out and flying around, which was lovely to see as lepidoptera had been conspicuous by their absence this year in some places. The Six-spot is one of the day-flying moth species on the Big Butterfly Count chart. 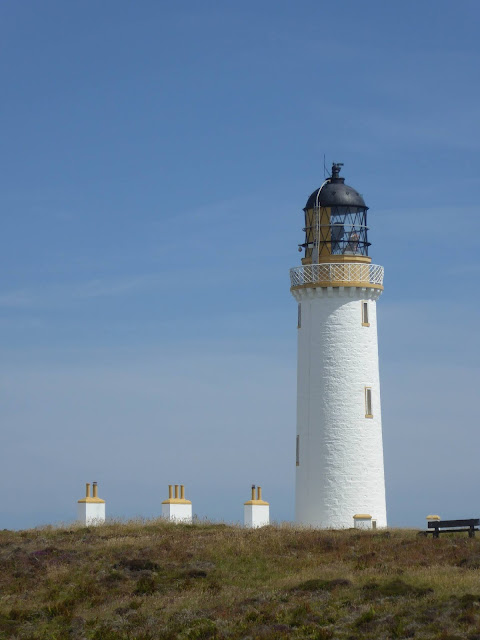 It was soon time to head down to the lighthouse. It marks Scotland's most southerly point, just as the one at the Lizard marks the most southerly point of Cornwall. The Galloway lighthouse has 115 steps to the top, and I am quite prepared to take that on trust! The lighthouse was built in 1830 by Robert Stevenson, grandfather of the writer Robert Louis. Ballantrae, as in The Master of Ballantrae, is a bit further round the coast towards Ayr.

The Mull of Galloway has a resident population of Rose Chafer beetles. These scarab-like insects shine with iridescence and can be found on the thistles and umbellifers like Hogweed that grow in this area. It took me some time to locate one of these beetles, but once I had got my eye in, we saw quite a few. In some lights they looked bronze and in others, a bright viridian green. The 'aurata' in the scientific nomenclature, Cetonia aurata, presumably implies a glint of gold. These insects always remind me of the Rose-Beetle Man in My Family and Other Animals by Gerald Durrell! You might be interested in a post about these strange creatures on The Cabinet of Curiosities blog. Some years ago the RSPB produced a Rose Chafer pin-badge, but I don't think it is available any more. 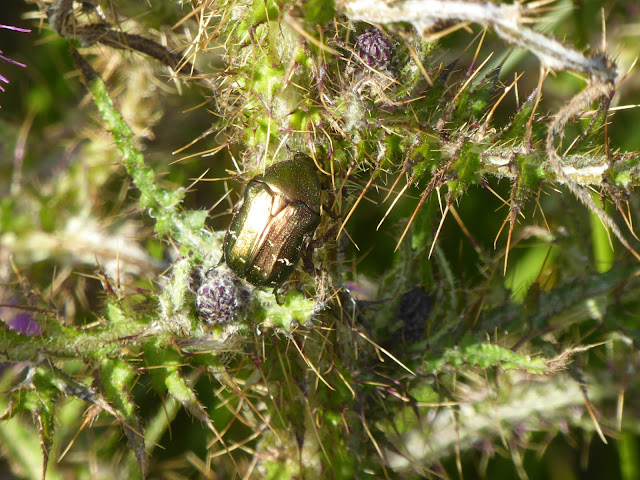 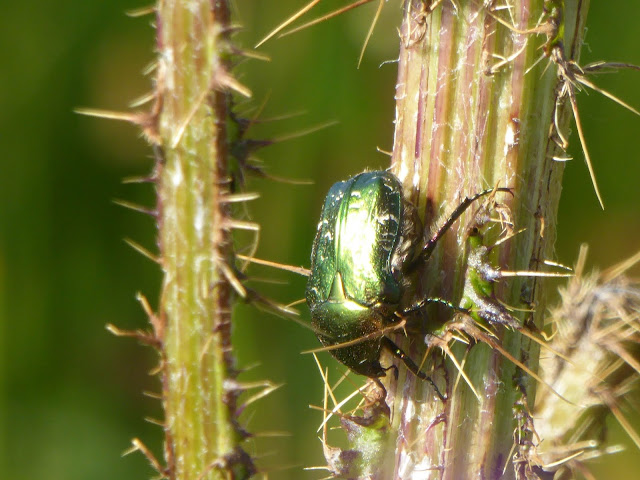 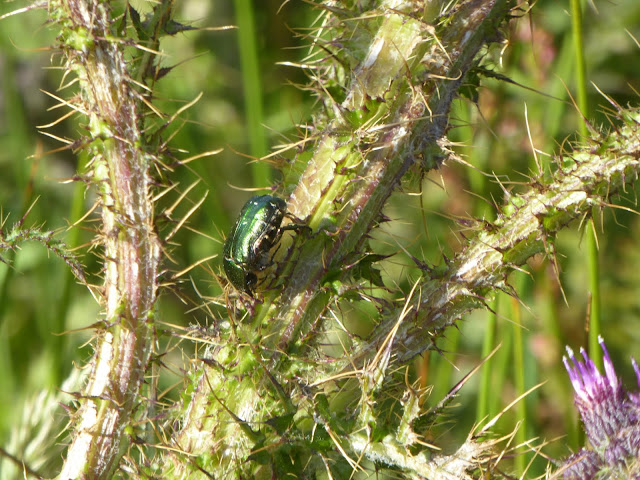 As we made our way towards the lighthouse, we saw a Linnet in the distance ... 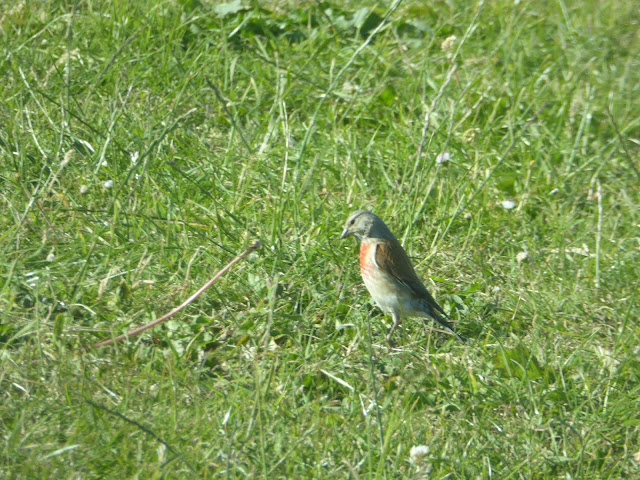 There were drifts of cotton-grass in the boggy areas... 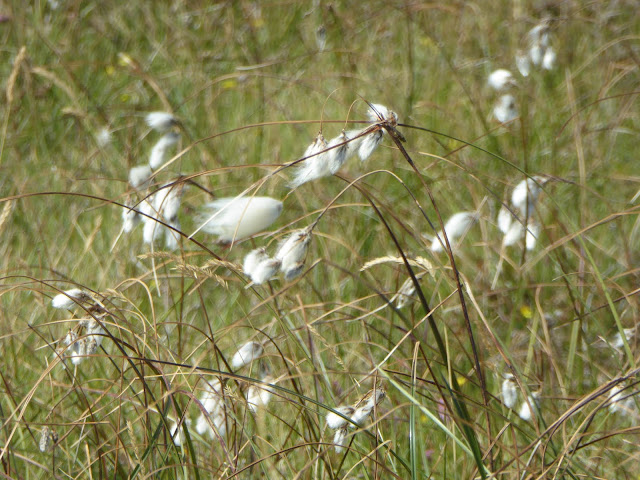 ... and Goldfinches in among the thistles. 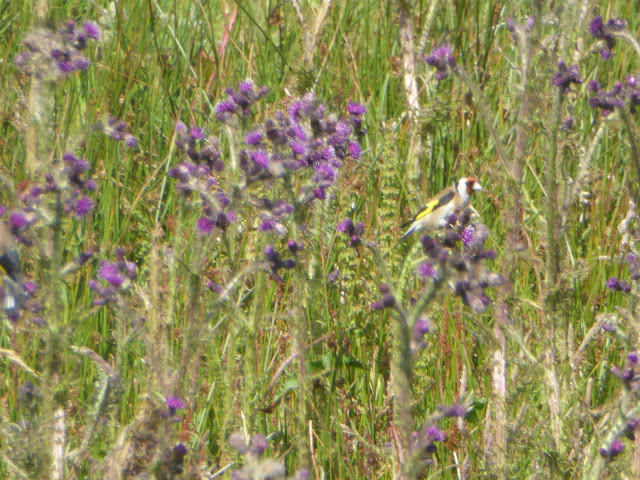 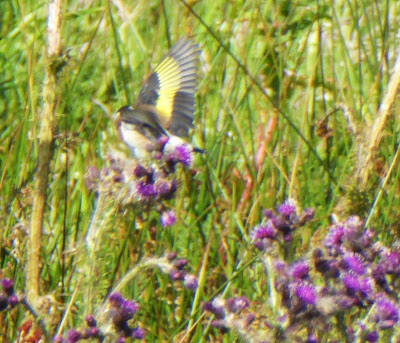 The path to the RSPB Visitor Centre... 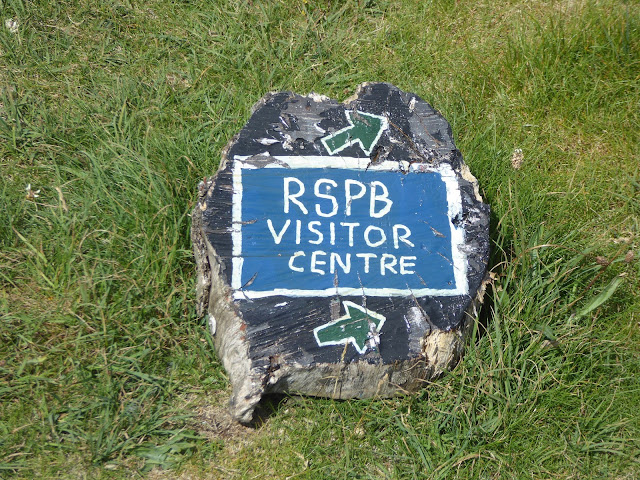 ... takes you this way, through a sheltered dip in the landscape. 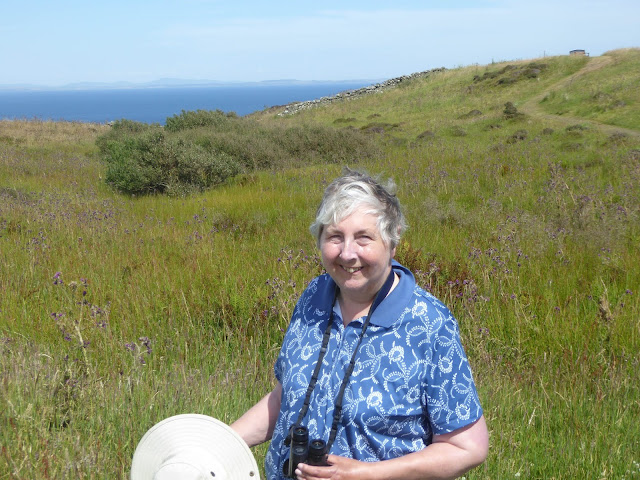 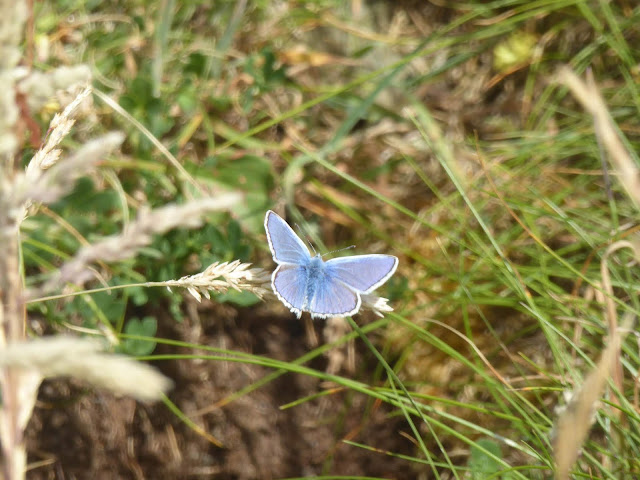 It proved a good spot for Common Blue butterflies. 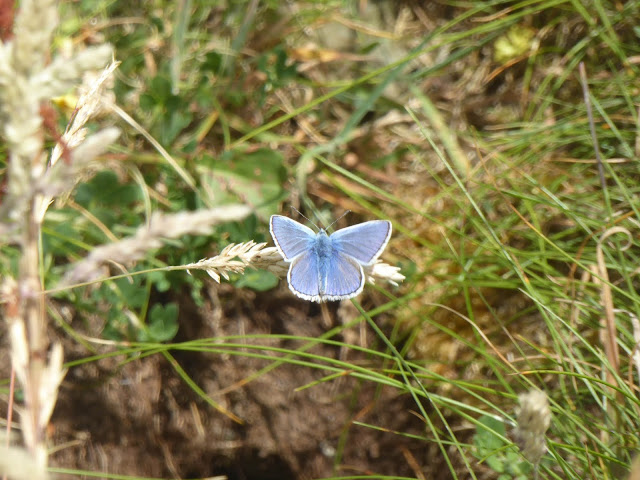 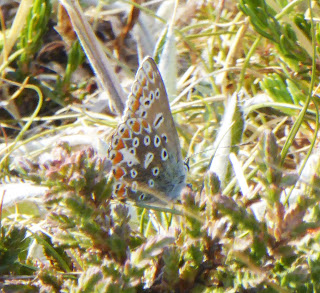 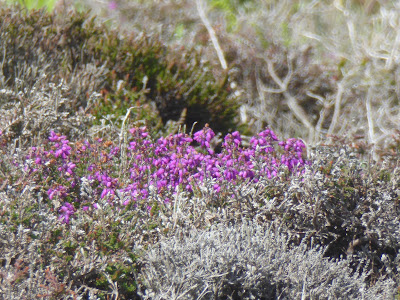 You can see the RSPB Centre top right. 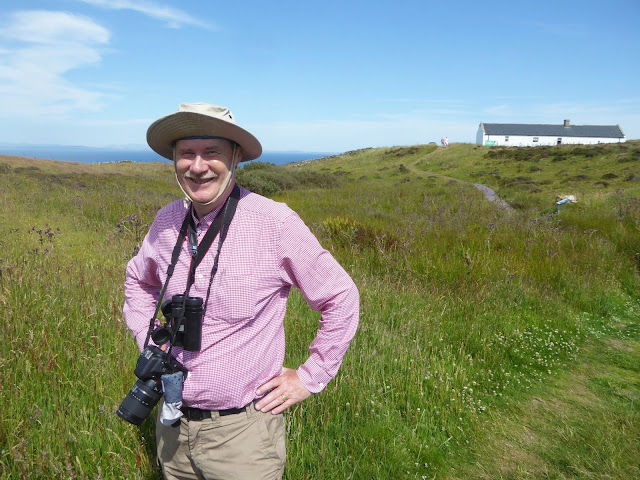 There are a few artefacts on display at the lighthouse. This Bible caught my eye: it was provided by the Northern Lighthouse Board for the Ailsa Craig lighthouse off the Ayrshire coast. The lighthouse keeper's life must have been a lonely and difficult one at times, and I imagine members of the Board decided to provide spiritual reading material for its staff in much in the same way that the Gideons distribute Bibles for patients in hospital today. 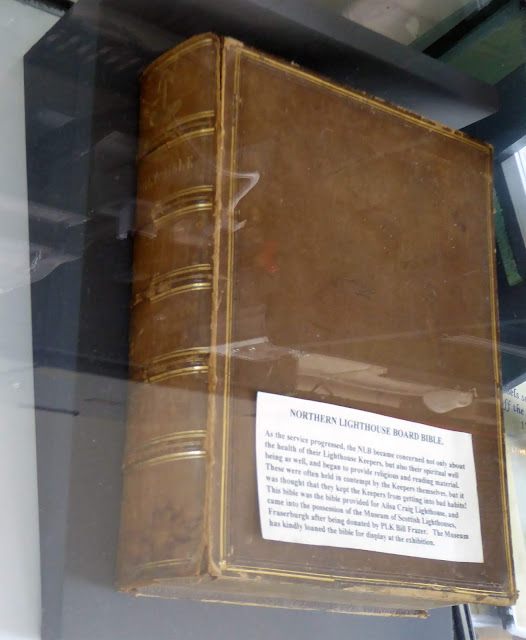 David saw a puffin here at the Mull on a previous visit. We failed to see any this time around, but there were plenty of Guillemots on the cliff ledges way down below us. 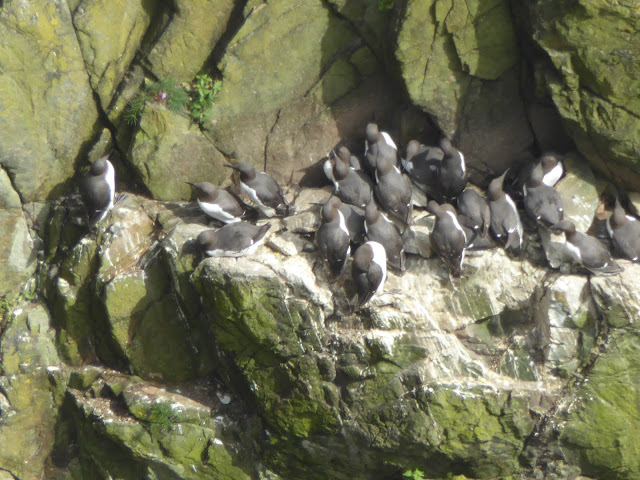 My next holiday post will include their black cousins, or Tysties, which we saw up the coast on the western side of The Rhins peninsula at Portpatrick.

I love the lighthouse and beautiful butterflies. Looks like a lovely place to visit.
Enjoy your day and the weekend ahead.

I always like seeing lighthouses, but I've not a good head for heights so I'm never too keen to go up them!

The Common Blue butterflies are such a wonderful colour blue aren't they.

You had a very nice holiday … looking forward to your next post.

lovely photos, a place we need to visit again.

I'm with Lowcarb about lighthouses too, vertigo keeps me from going up them

What a wonderful day you had. I love the lighthouse - I don't like heights so rarely go up to the top - not to mention the thought of all those steps!!

The Rose Chafer beetles are beautiful and I can understand you thinking of the Rose Beetle Man in the superb Gerald Durrell book.