Lound Lakes, Southwold Beach and A Pair of Late Visitors of the Spiny Kind 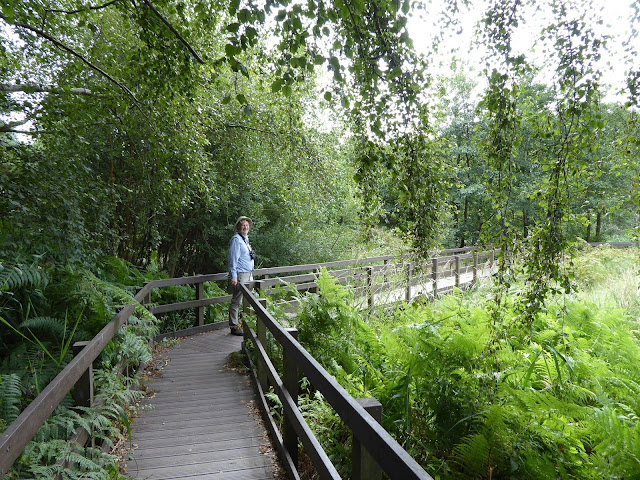 I'm a sucker for a boardwalk, and when I read that there was one at Lound Lakes, owned by Essex and Suffolk Water and managed by Suffolk Wildlife Trust, I was keen to go and find it. As it turned out, it was not particularly long (the boardwalk at Wicken Fen is my favourite ... and it has lizards), but it offered good views of one of the lakes and the very active dragonflies. We heard a lot of splashing but failed to see any jumping fish. 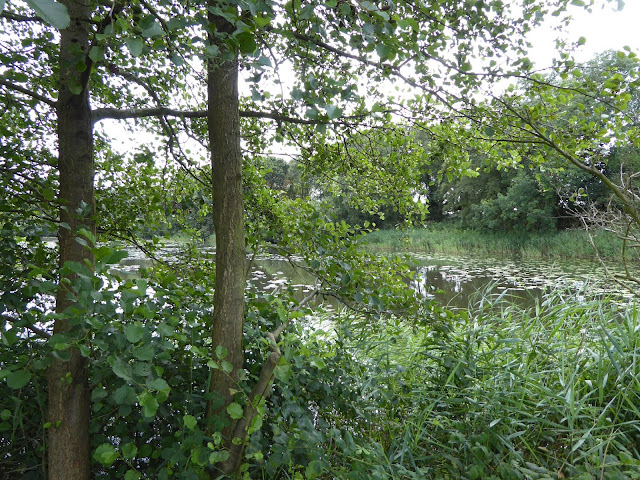 This shows the view from the start of the boardwalk ... 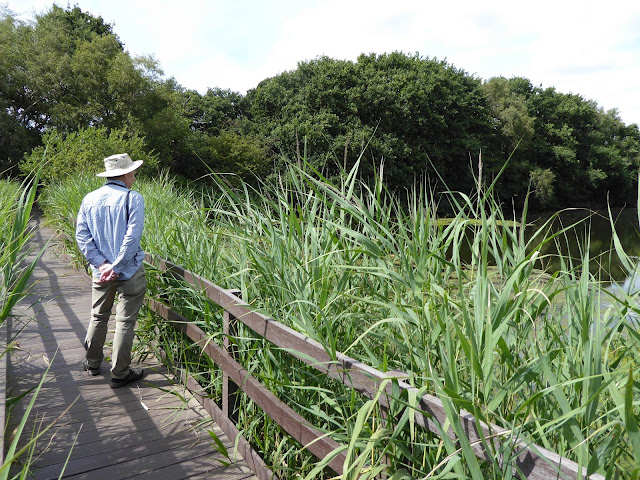 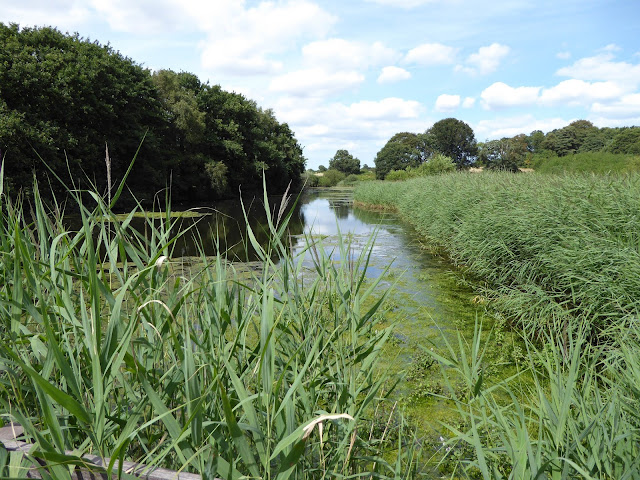 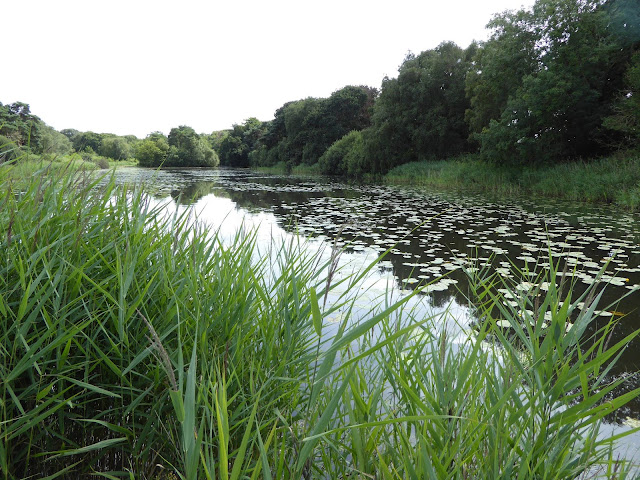 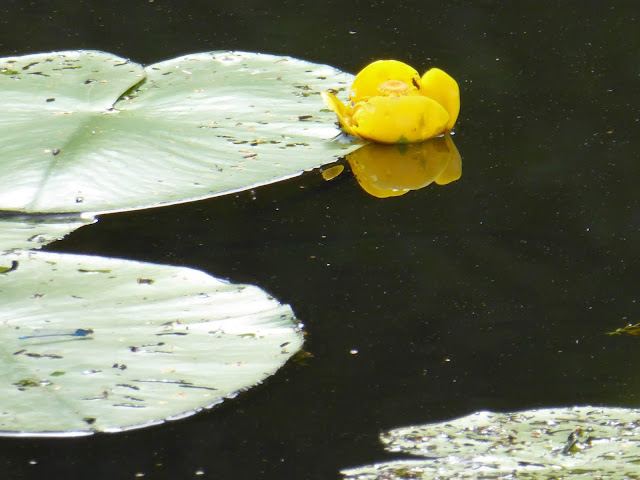 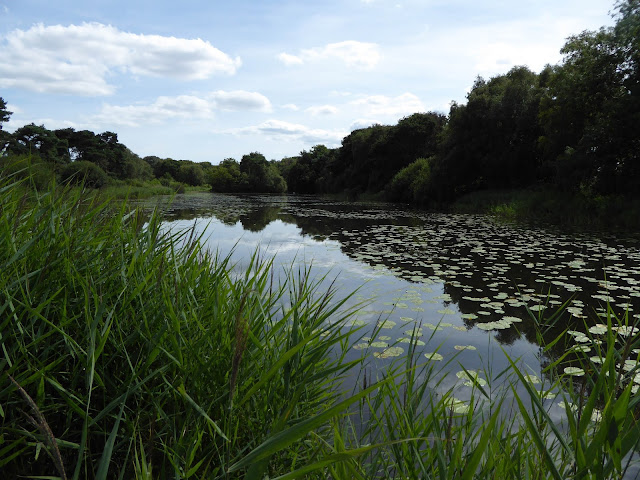 We had hoped to see butterflies, and indeed we did see a few. David also spotted this rather handsome Dock Shieldbug ... 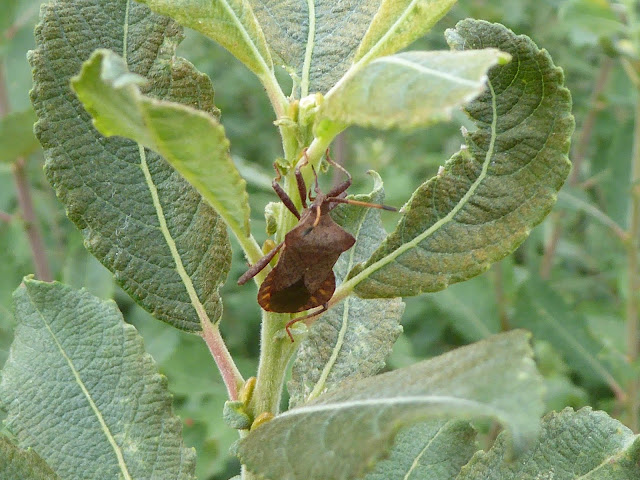 Do you think this would be an owl box? I felt the hole was rather small. 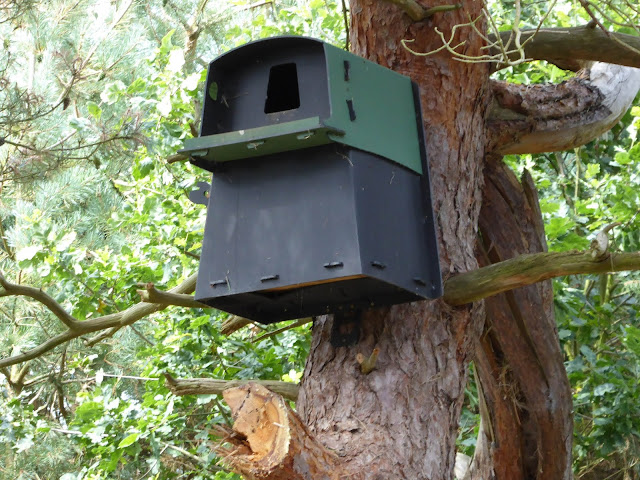 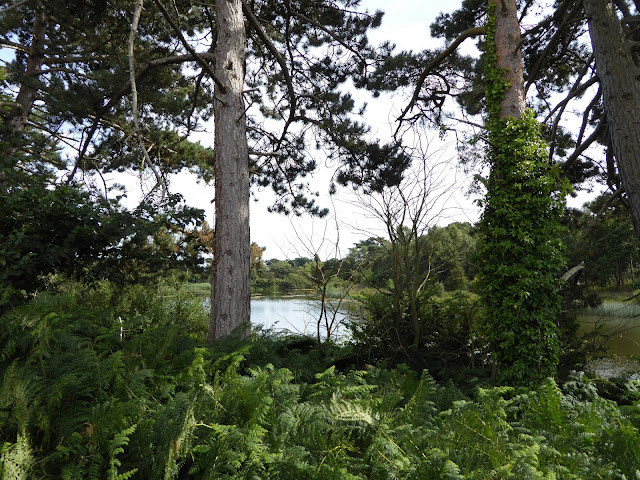 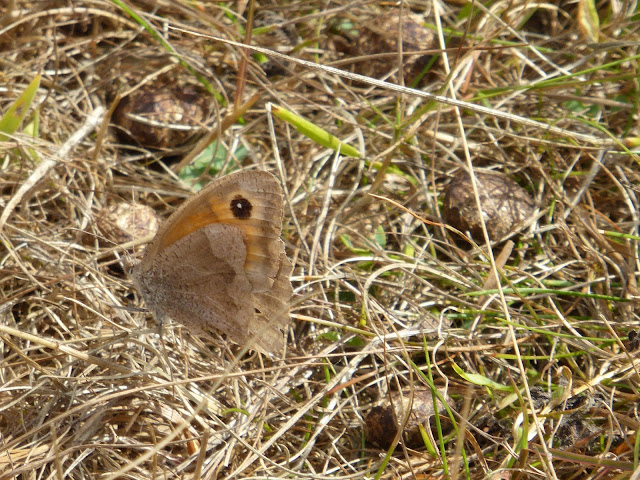 The butterfly above is a Meadow Brown and the one below, a Gatekeeper. 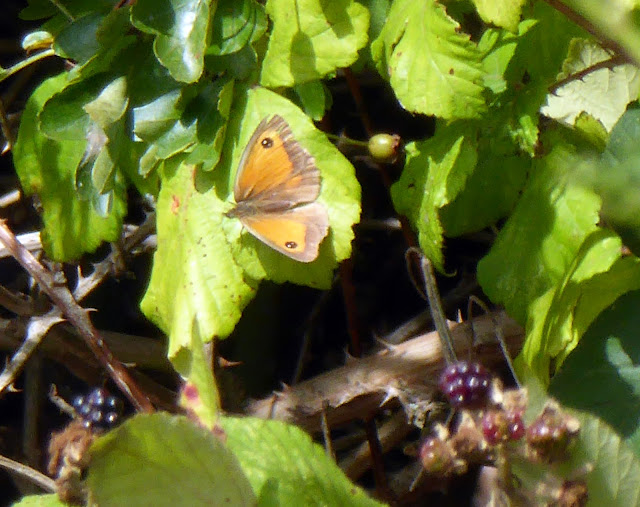 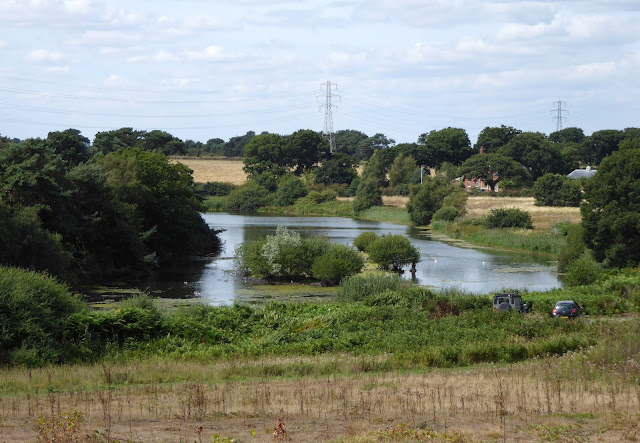 The photo above was the view from our picnic bench, looking out across the countryside in this area where Norfolk and Suffolk meet. 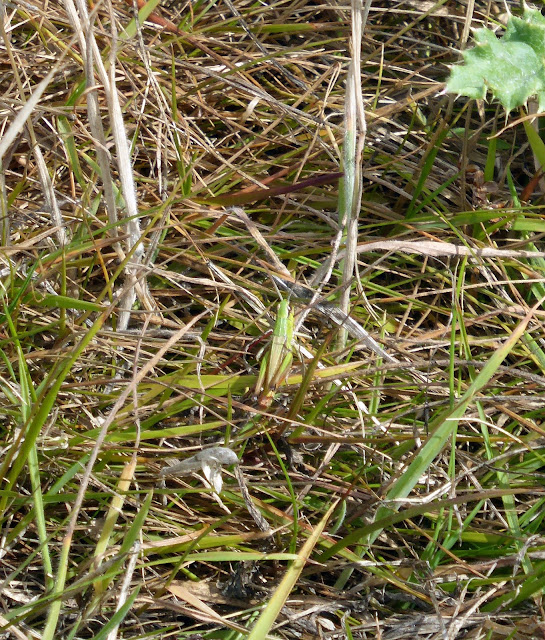 Eagle-eyed David (below) spotted this grasshopper (above). Such good camouflage! 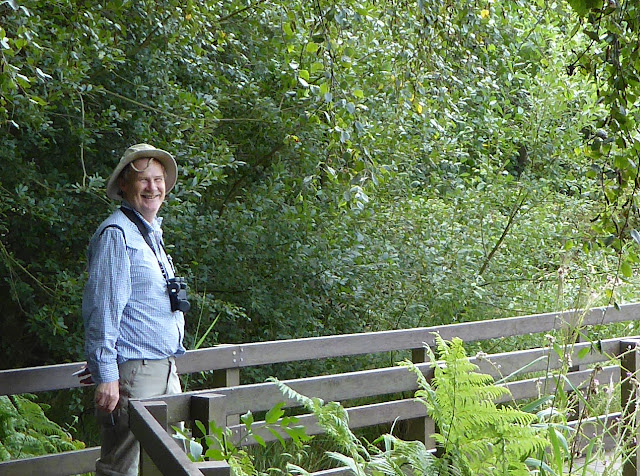 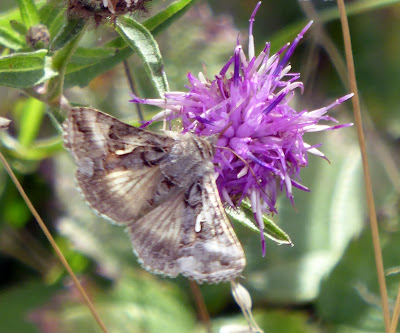 I can hardly believe that I saw two more Silver Y moths today. It is proving to be a good year for them. 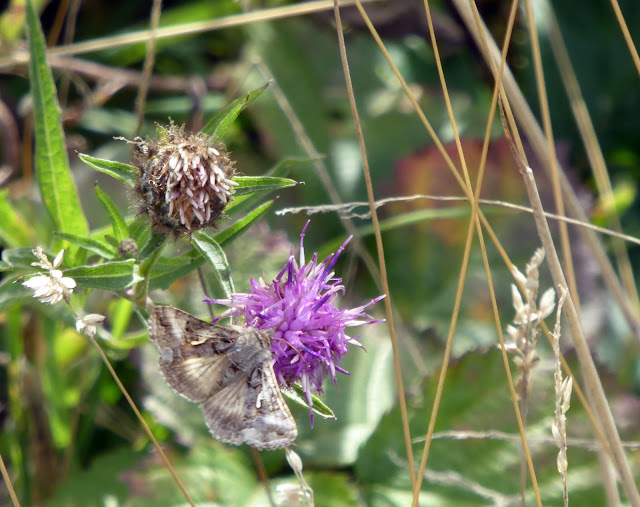 The butterfly below was very skittish: I was longing to get a photo of it with its wings out, but this opportunity eluded me. It seems to be a Holly Blue from its distinctive underwing dots and dashes. I am guessing it was a male as the black border was hardly noticeable. 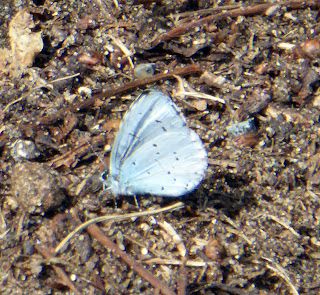 We left Lound Lakes in the afternoon and reached Southwold at about 5.30 pm. I have not seen so much sand on the beach before and have certainly never seen such a marked sandbank.

I suppose Saturday is 'change-over' day, but for a warm August afternoon, the beach seemed surprisingly empty (though there were plenty of cars in the carpark). 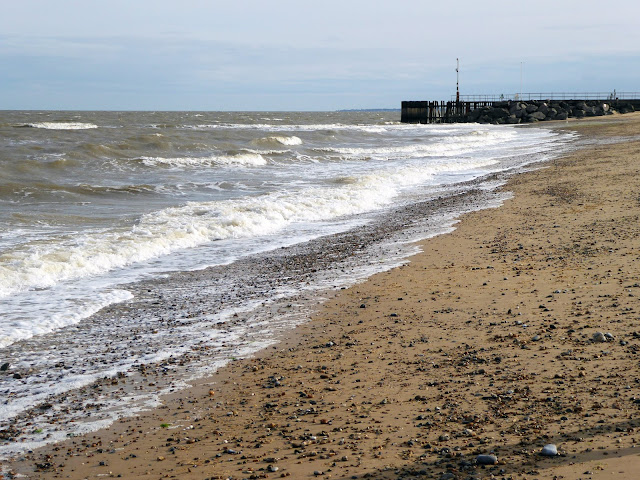 We visited the beach at Southwold quite a lot during my teenage years, and I have always felt that it is one of the best beaches for pebbles. 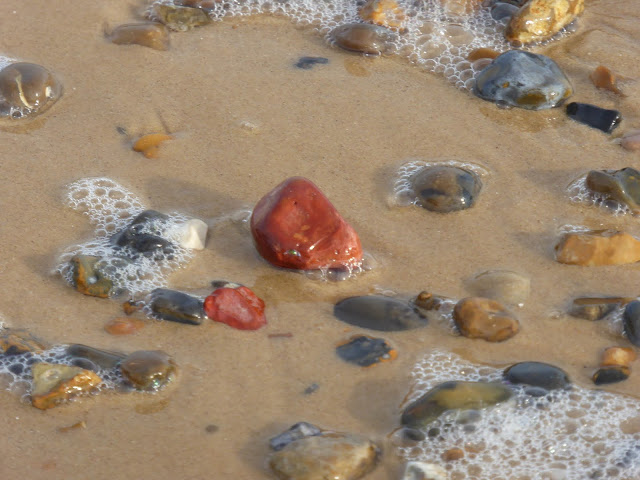 I got quite good at identifying some of them at one stage, and am delighted to find that The Pebbles on the Beach: a Spotter's Guide by Clarence Ellis has just been republished by Faber. 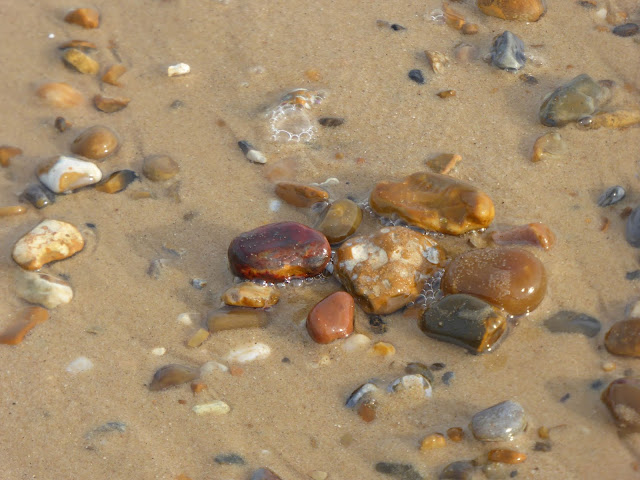 I couldn't resist including the next photo: it isn't a colourful pebble, but its markings reminded me of the fossils found on Charmouth beach during the recent BBC4 Beach Live: Jurassic Coast programmes presented by Lucy Cooke, Dan Snow and Niall Strawson, which we have been watching (a month late!) this past week. It also reminded me (well, just a bit) of the Sea Potatoes that have been washed ashore near Penzance. 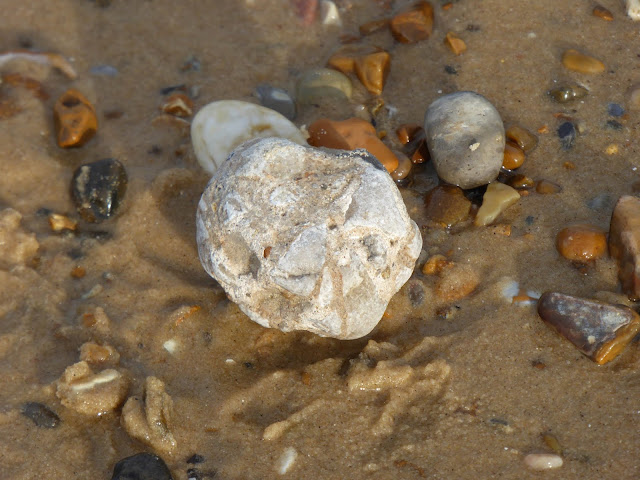 And just to add at the end of this somewhat rambly and diverse post that when we went out to look at the sky with Perseid showers in mind, not only did we find cloud and rain but also a tiny hedgehog. Thankfully when I went back to look, there was a large adult as well, presumably the mother. I suppose the rain had brought out the slugs ... I didn't want to alarm the youngster with flash photgraphy, so here is a photo of a previous visitor enjoying our garden under cover of darkness ... 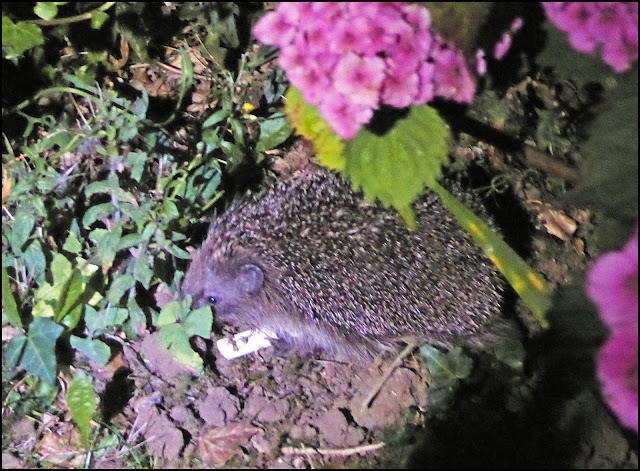 It looks a great boardwalk to explore Caroline. I love the pebbles on the beach too - I found out recently too that the Pebbles on the Beach book was going to be re-published. I suspect it is a book I will just have to buy :)

Wonderful to see the hedgehog in your garden and, even though I haven't put my moth trap out recently, it does seem a good year for silver y's.

So lovely to see your photographs.
I have never visited Southwold, it is a place I would like to go.

Thank you, RR, for your kind comment. Yes, I think we will both be keeping an eye out for the updated pebble book!