Isle of Wight (1): Osborne and Carisbrooke 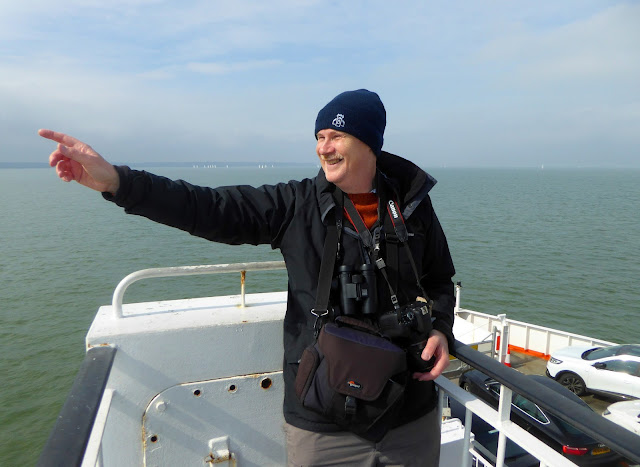 I mentioned in my last post that I had been away from my computer on the Isle of Wight and that I would share some pictures of our visit. We had a bitterly cold but calm crossing. We stayed out on deck, and David enjoyed looking at the forts in the Solent. The yachts from Cowes were out in force: you can see the island in the distance. I had spent a night on the island a long time ago, but had not previously had the chance to explore beyond Ryde and Newport.

We drove straight to Osborne House, Queen Victoria's holiday home, with gardens stretching down to the sea. 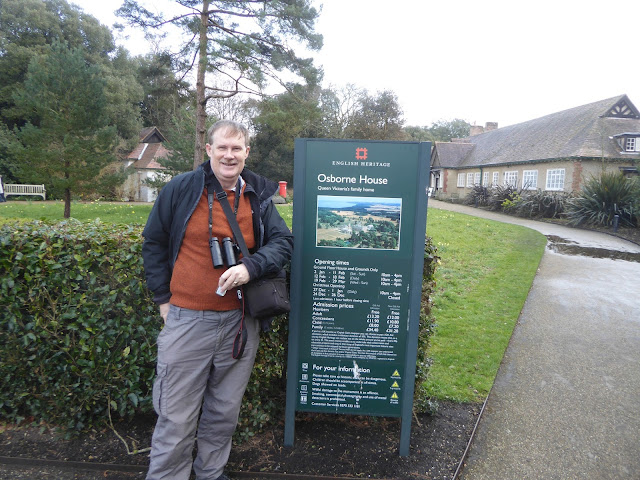 We passed this Victorian pillar box on our way to the cafe, where we were glad to warm up after the crossing with cups of steaming coffee. 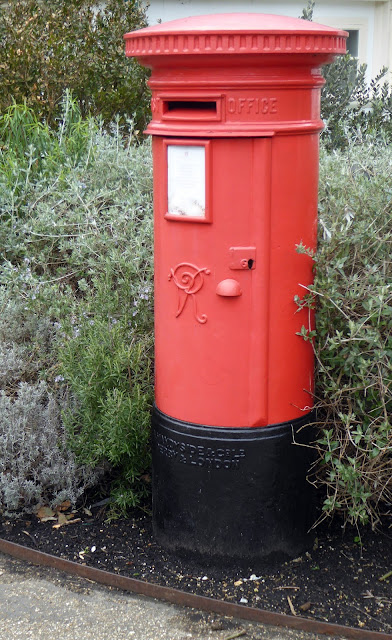 You can just about make out the Solent. What lovely trees. 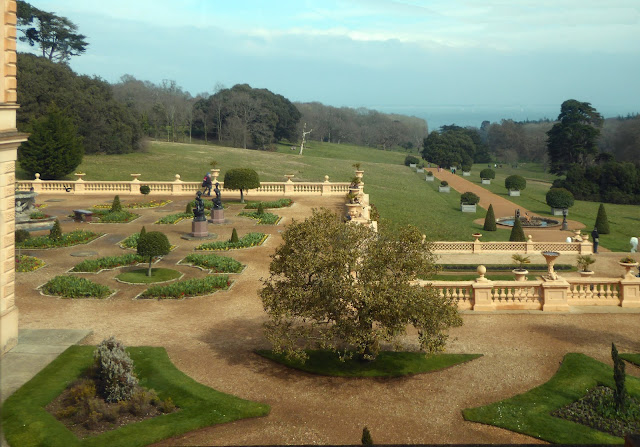 We thoroughly enjoyed seeing inside the house, and were delighted to find that we could picnic in the grounds. We perched on a bench near this stone sphinx, among daffodils and polyanthus. We noticed several holes in the soil: they were too large to have been made by mice so perhaps there were Red Squirrels in the vicinity ... 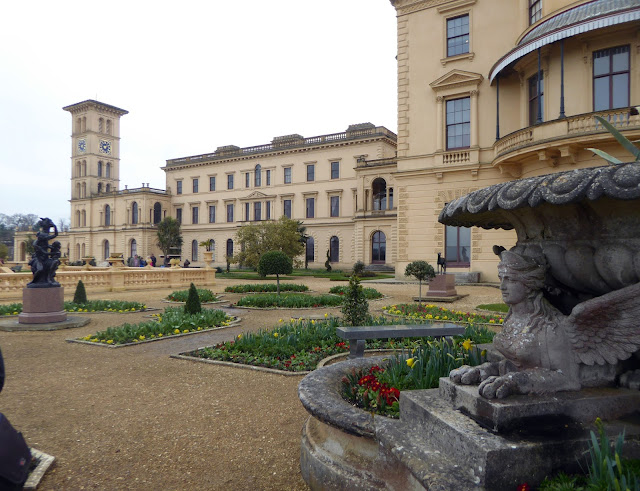 There were some wonderful decorative features: the frieze below adorned the inside of the house, with its Greek 'key' or 'meander' pattern, its palmettes and other motifs. 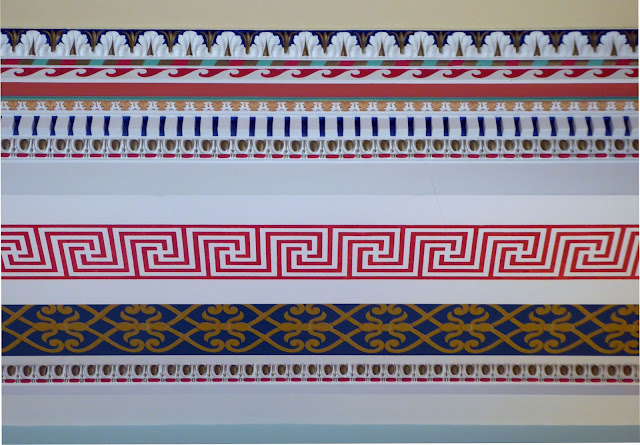 The grotto outside was also very classical in appearance, with its shells and colour scheme. 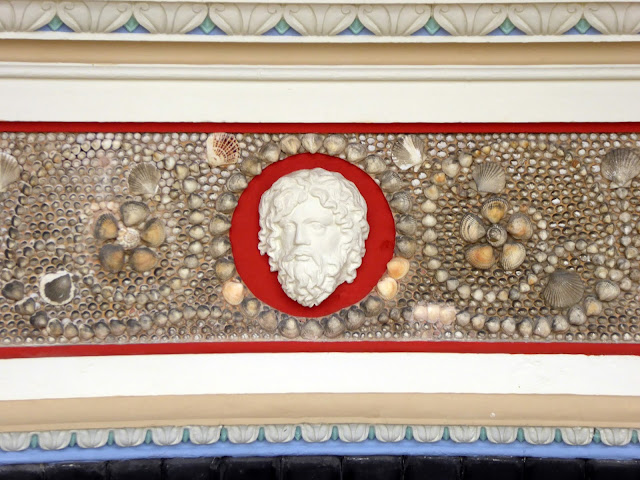 I think we were both surprised at the number of corvids on the island. This rook was patrolling the lawn. 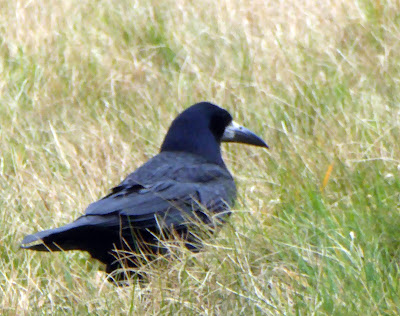 What wonderful blue skies in the photo below! 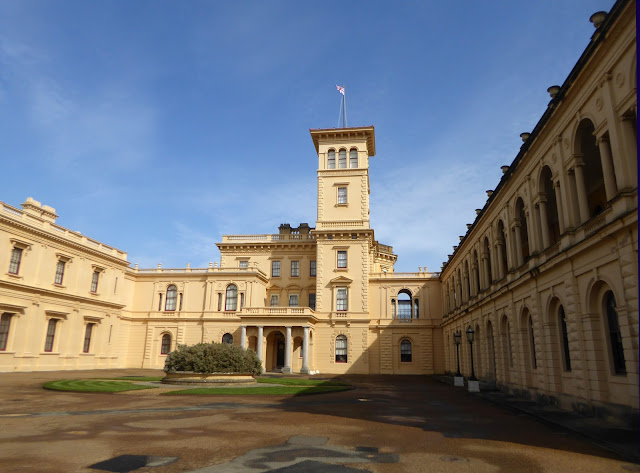 This last week has seemed very much like early summer; but despite the wonderful banks of primroses, our time on the island barely felt like spring. 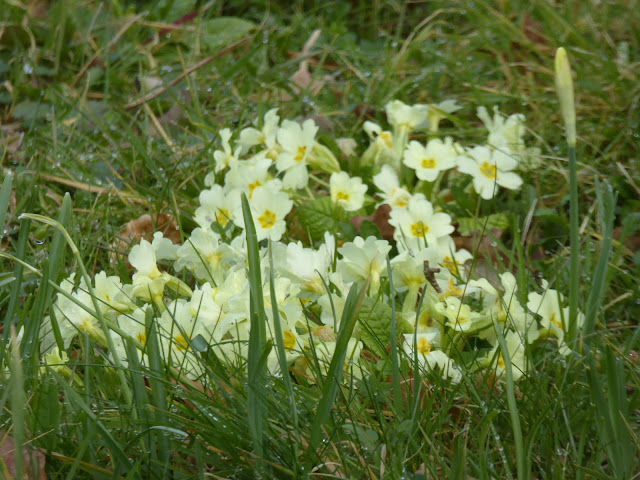 My thanks to David (Gill) for the two photographs above. We spent a wonderful afternoon exploring the castle. Princess Beatrice, Queen Victoria's youngest daughter, has this lovely garden named after her today, but way back in the 13th century, Isabella de Fortibus created an early garden here at Carisbrooke.

Back in 1817 John Keats remarked on the Jackdaws, and I am glad to report that in 2018 there were a few glossy Jackdaws in residence. The pair below, taken with the full extent of my zoom, were literally perched in the masonry. I suspect the next generation of these birds will soon be on the way. 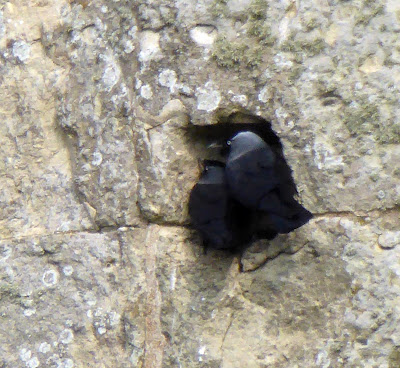 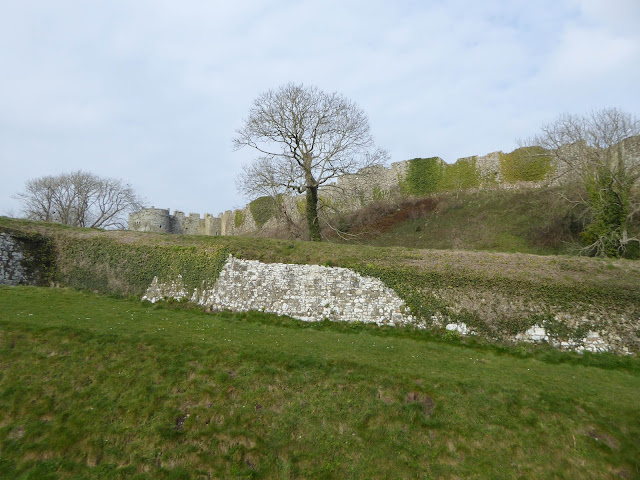 We have really noticed the first flush of green growth on the trees this last week, but you can see in the photo that the branches were still bare. What impressive castle walls.

We concluded our visit to Carisbrooke Castle by sitting outside with a pot of Earl Grey tea and slices of cake. We returned later in the week for a brief visit, and I particularly enjoyed seeing some of the artifacts in the museum.

My next post will step back in time to the Roman era when the Isle of Wight was known as Vectis.

A wonderful post Caroline - I so enjoyed seeing all your lovely photos. Osborne and Carisbrooke were a wonderful start to your holiday. A shame it wasn't a bit warmer for you - but the island is beautiful at any time of year. Really look forward to seeing your next post and thank you for sharing and bringing back many happy memories for me :)

I'm pleased you had a lovely holiday trip to the Isle of Wight.
Although I've visited the Island, I've not been to either Osborne House or Carisbrooke Castle. I must put them on my to visit list!