With sweeping views like this it seems hardly surprising that the Isle of Wight is steeped in literature. The literary connections on this website alone bear testimony to this fact.

With the 'Break, break, break' of Tennyson's evocation of the waves ringing in my ears we set off for a pre-booked guided tour of Farringford, the poet's island home. There was a certain sense of mystery as we walked through the shiny brown door: we were entering the territory of a remarkable man who not only recreated the charge of the Light Brigade, but brought the colourful image of the Lady of Shalott and her charmed web before our eyes. 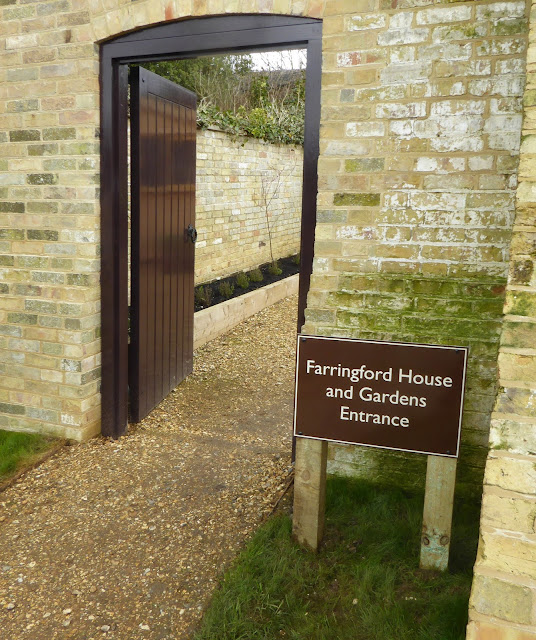 It was cold and fresh, but as we walked towards the house, we were greeted with signs of spring in the form of a swathe of crocuses. 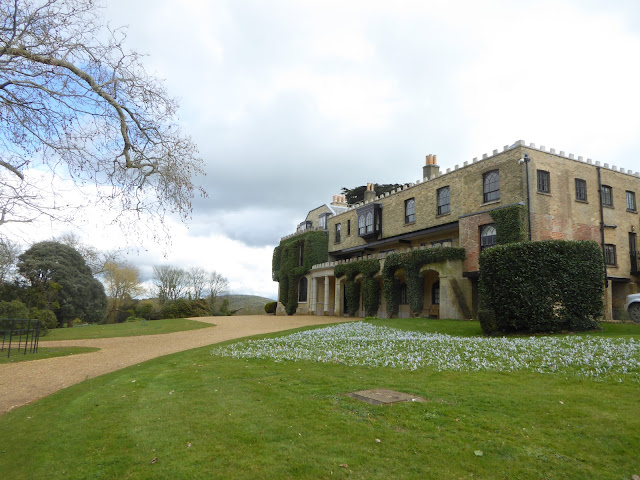 You can catch a glimpse of the grounds, with the house in the distance from the greenhouse. 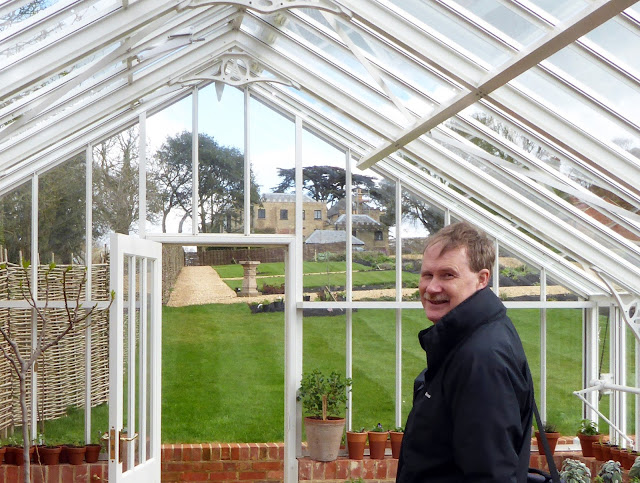 There were plenty of small plants and a splash of gold from the miniature daffodils. 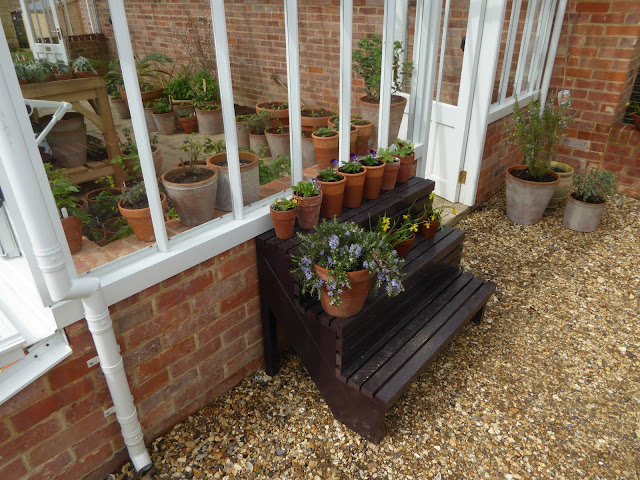 No prizes for guessing who had been gnawing the fir cones! Though, sadly, we never saw a Red Squirrel. 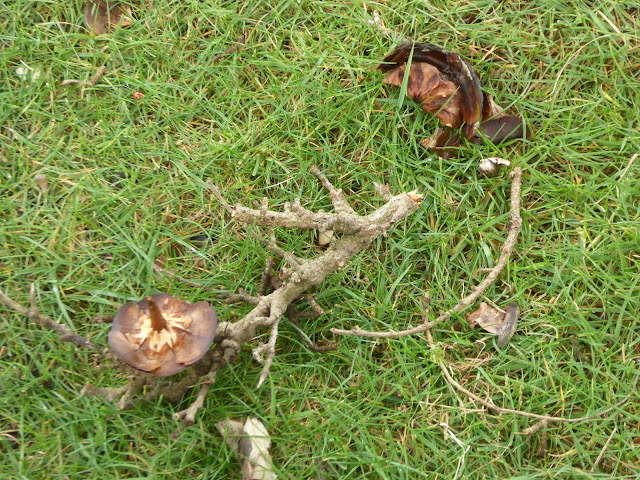 The photo below gives a good impression of the path up to the house. Just imagine how beautiful this will be on a summer day. 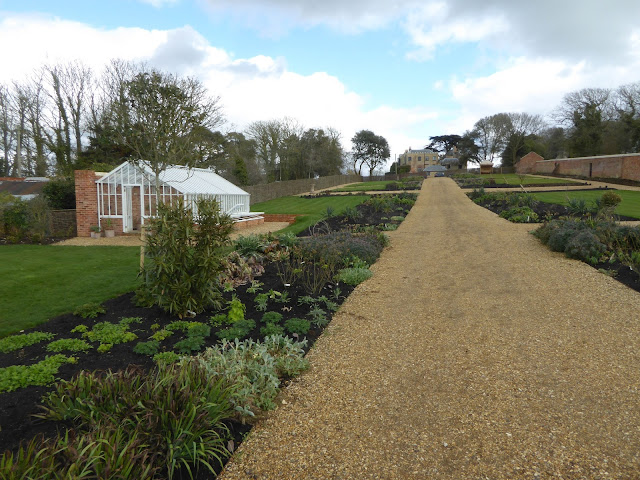 Here I am at the entrance, just before the start of our tour. We were given an introduction and were then handed audio-guides so that we could go round pretty much at our own pace. I am not usually a fan of these machines, but the commentary was excellent. The staff were very helpful, too.

Tennyson settled here in 1853, and bought the property three years later. His library, one of my favourite rooms, equipped with a terrestrial and a celestial globe, was built in 1871. I was also particularly drawn to the (intensely blue) Blue Room on the ground floor, with its Parthenon frieze wallpaper. 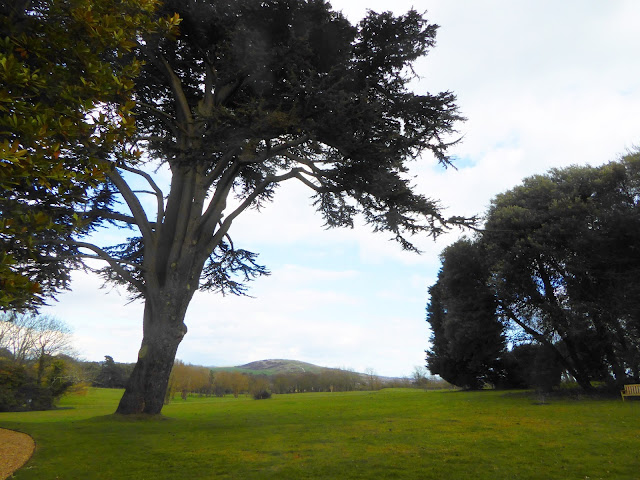 The views of 'West Wight' from the grounds are wonderful.

Two days before our guided tour we had been exploring the area near Tennyson Down. The primroses were beautiful. 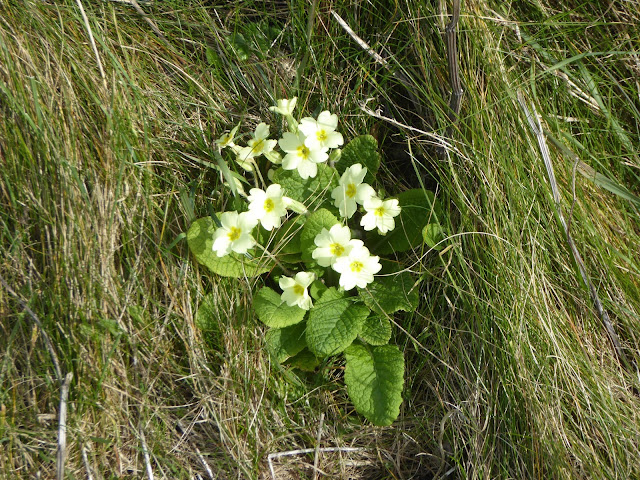 David left me to 'take the low road' while he climbed to the top: you can just see him disappearing over the brow. 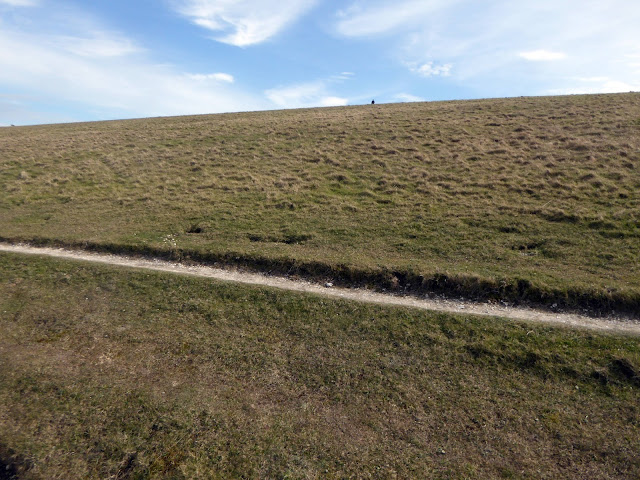 The white cross in the photo below is the Tennyson memorial, a cross to serve as a beacon to sailors. And yes, we did have some wonderful blue sky! 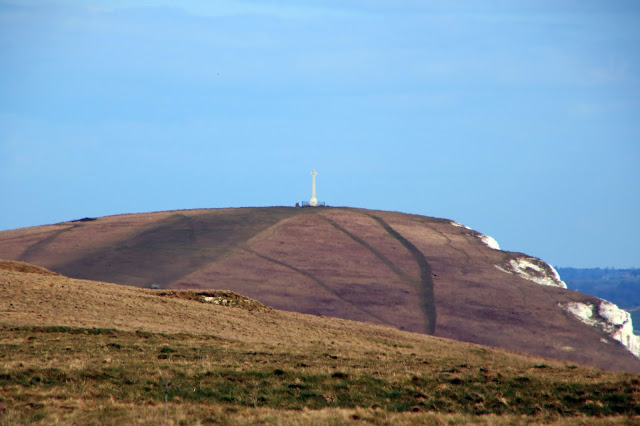 While David was walking on the ridge, I took a level path towards Alum Bay, and was delighted to find the following Tennyson quotation (from 'The Charge of the Light Brigade') on a National Trust gate. 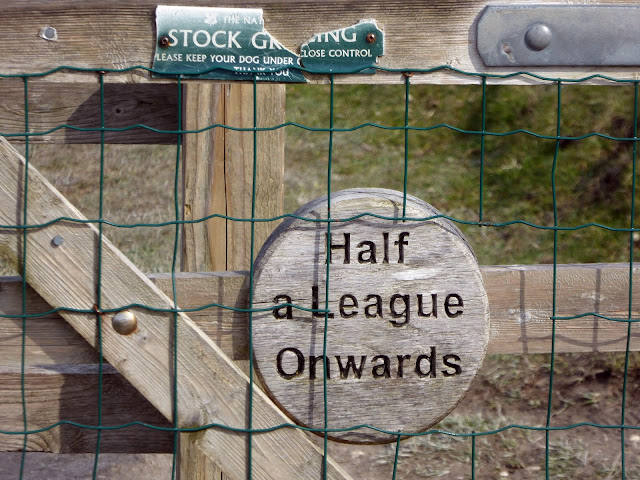 We spent a little time on the beach at Freshwater ... 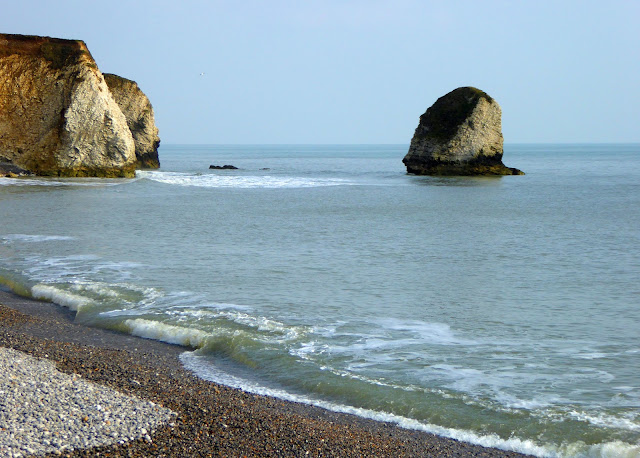 ... and tried to visit the little thatched church of St Agnes. Sadly it was locked. You can read about it here. The stone is very old, but the building is only just over a century. I shall stay in the West Wight area for my next post, which will be about our visit to Alum Bay and the Needles.

Great post again Caroline. I love the Military coast road in your first photo - it has stunning views and is my favourite part of the island. When we went last year Farringford had not yet opened so it was great to read your text and see the photos. Hopefully we can go this year. Strange about St Agnes church being closed as most churches over there are open - perhaps it was still outside what they class as the "tourist" season?

A super post and good to see the walks you did. I look forward to Alum Bay and the Needles :)

Wow those sweeping views in your first photograph are so lovely, a joy to see.
I am enjoying your Isle of Wight posts very much. I think you were also quite fortunate to get decent weather ... which is always an added bonus on a trip/holiday.