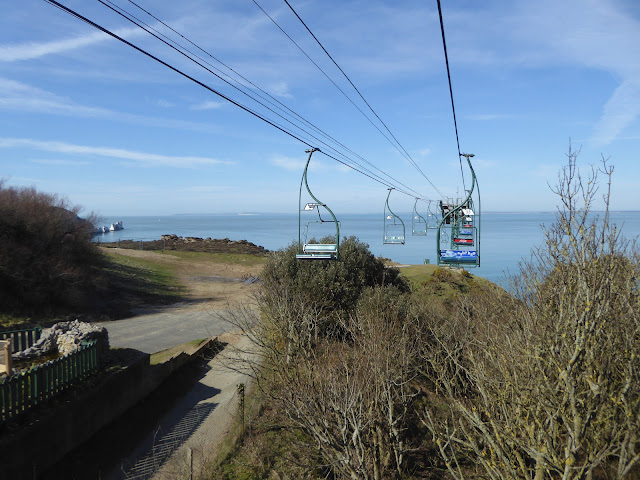 According to the local Isle of Wight forecast, the Monday before Easter was due to be the brightest day of the week, so we headed off to see the famous coloured sands of Alum Bay.

As a youngster I was very interested in stones and fossils. Our holidays were largely spent on The Lizard in Cornwall, with its wonderfully rich shades of serpentine. I remember being very excited on one occasion when I thought I had discovered samples of a rare mineral in among the grains of sand on the beach at Kennack: these turned out to be spines that had come adrift from the test or exoskeleton of sea urchins. They may have been 'animal' rather than 'mineral', but they were fascinating all the same.

Friends and family members have visited Alum Bay over the years, but I was keen to see the cliffs for myself. I wasn't so sure about the chairlift, but what a lot of fun it proved to be. 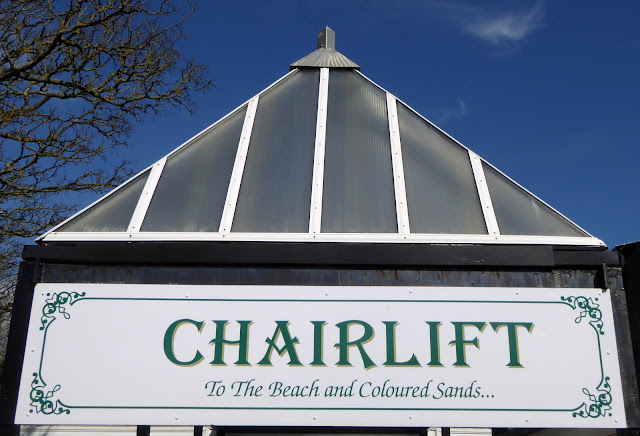 What a view... and with the Needles in the background. 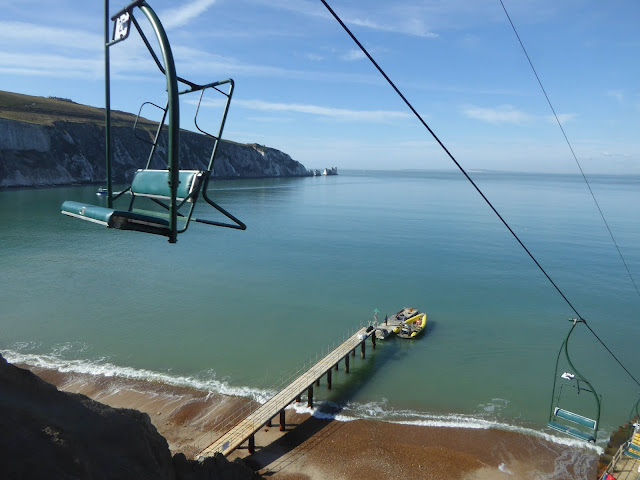 But what a long way down! 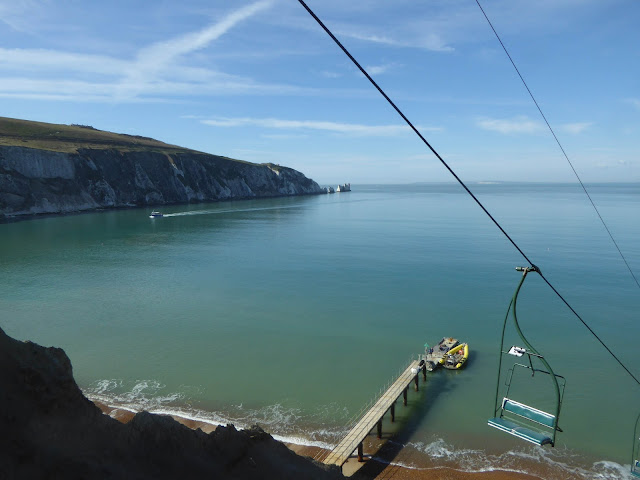 All too soon we were on the beach in glorious sunshine. 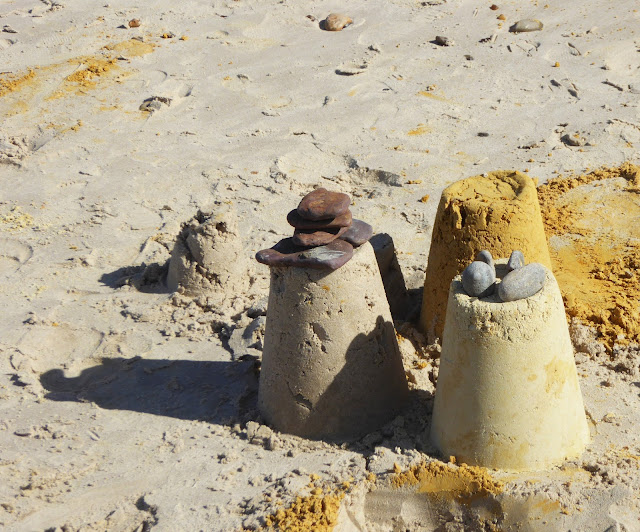 I came across these sandcastles, and felt they demonstrated three shades of the coloured sand to perfection. I had not imagined that it would be possible to separate the colours in this way without the use of some kind of equipment. 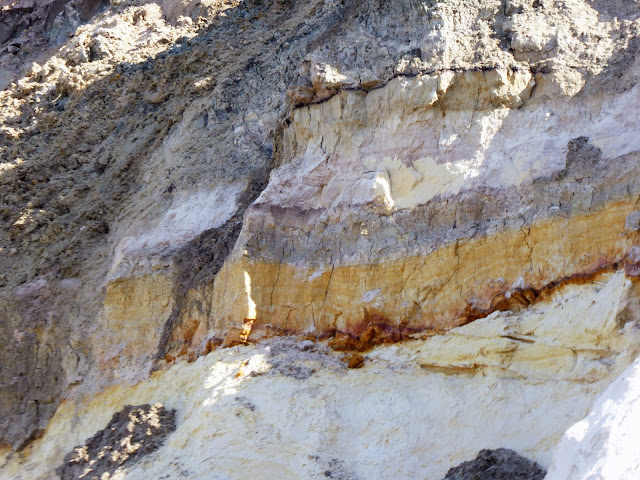 We had only to turn our backs on the sea to notice these stratifications of colour. 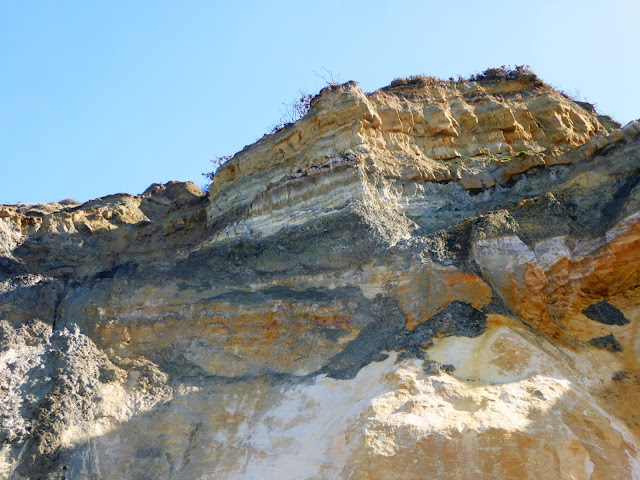 My eyes alighted on the small red outcrop of sandy rock in the photo below. It looked volcanic and hardly seemed real. 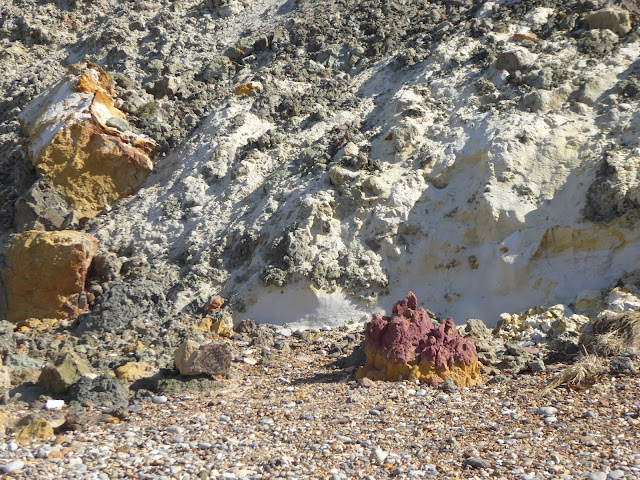 This website is packed with pictures, tables and photos about the minerals of Alum Bay. It explains the different colours and their mineral formations.

I am no geologist, but my understanding is that the red sand above comprises Pyrite (Ferrous sulphide) that has been oxidised in the cliffs. The other colours in the cliffs are due to ...
And, of course, as you round the bay towards the Needles, you encounter the stark whiteness of chalk.

There is a helpful section on the colours in this pdf. 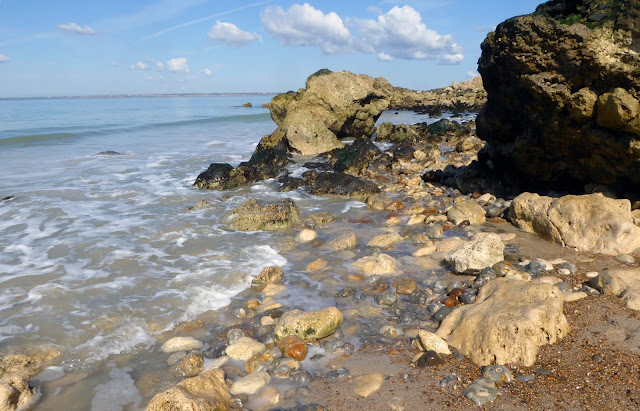 We had a lovely time on the beach. A quick glance at this photo above with its rocks and pebbles shows immediately that there is a mix of mineral material. 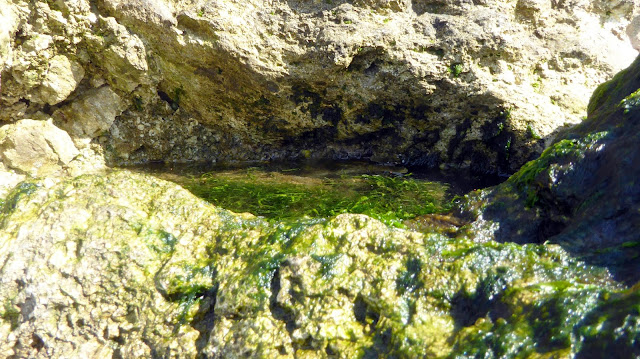 The tide had receded while we were on the sands, revealing one or two rock pools like the one in the photo above. Sadly the seaweed was too slippery to allow me a close look. 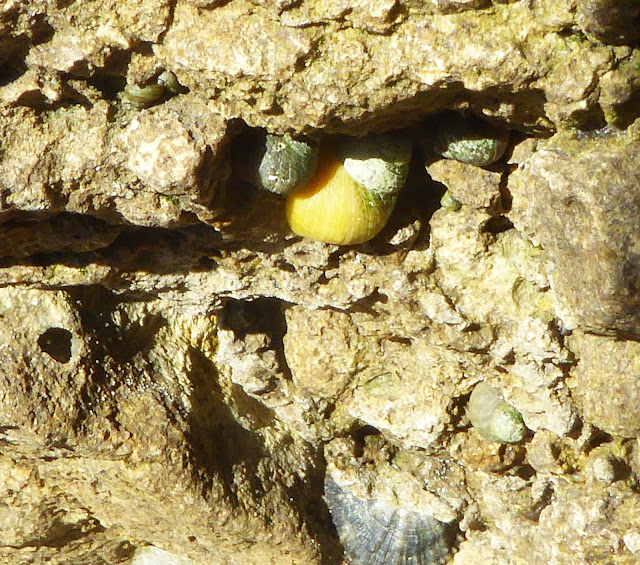 The coast around the island seemed rich in shells. The photo above shows a small corner of rock on the beach at Alum Bay, housing a Limpet, a yellow-coloured Dog Whelk, Nucella lapillus (these come in various shades), and at least five other molluscs. 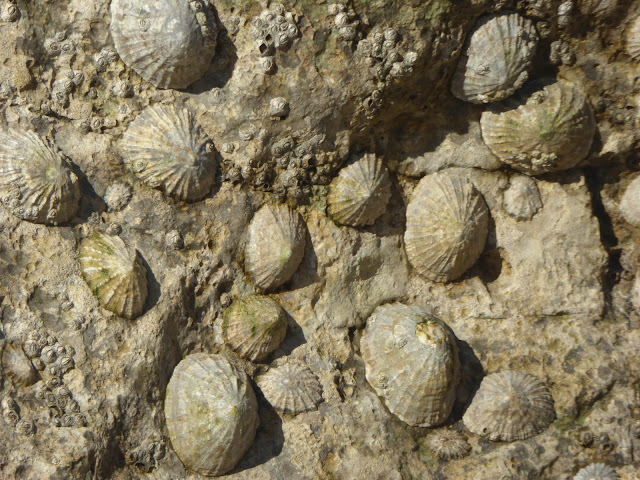 Limpets and barnacles were well represented, too. 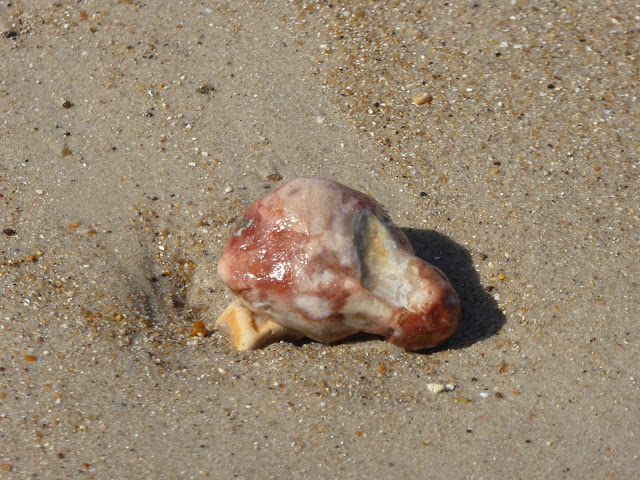 The pebbles were beautiful, particularly those on the tideline, washed by the waves. I haven't been able to identify the one above. 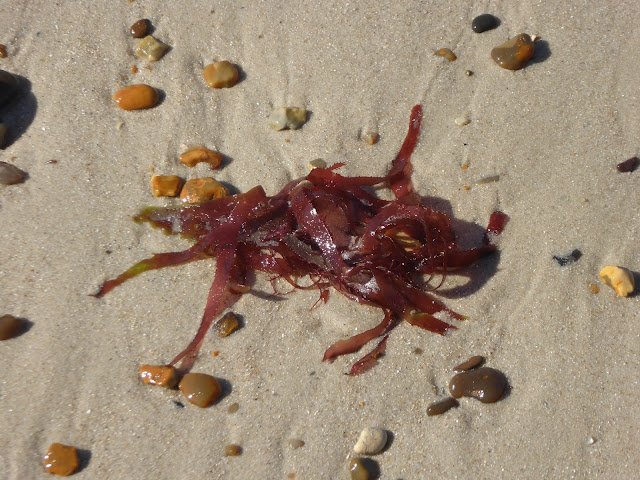 These strands of red seaweed complemented the pebble above. 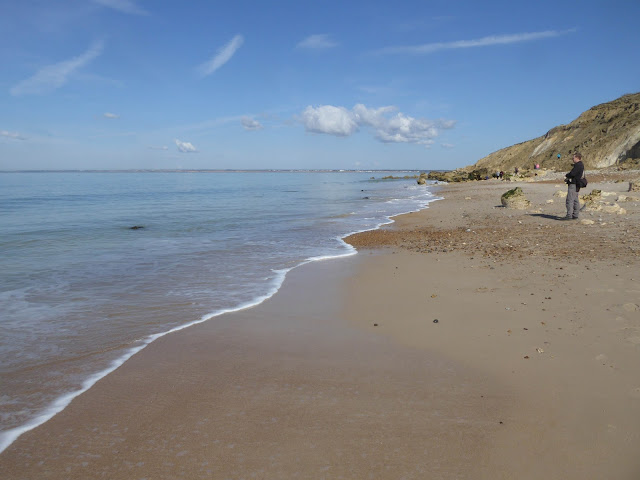 We watched a helicopter as it flew over the Needles. The photo above shows David peering out to sea. What a lovely empty stretch of beach! 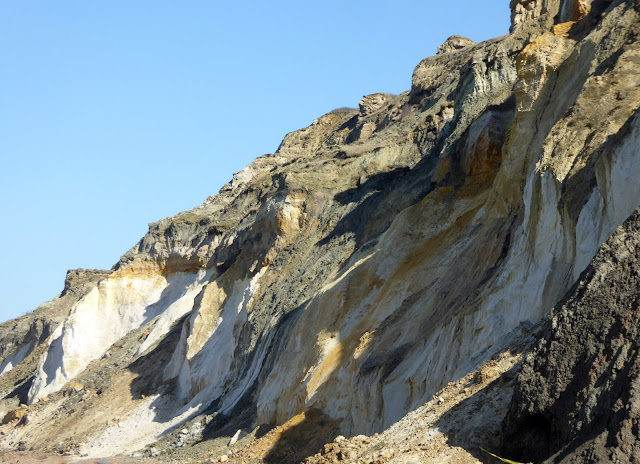 Not surprisingly the coloured sands of Alum Bay have been popular for a long time. The first known mention is from 1780. Queen Victoria was apparently presented with sand gifts from Alum Bay in 1860, and this started a trend. Victorians were particularly fond of sand souvenirs and these took many forms: we noticed the bell-shaped ornament below in the museum at Carisbrooke Castle. Tourists in times gone by could purchase a painterly picture, or marmotinto, crafted from sand: they could also buy small packets of sand with which to create their own. 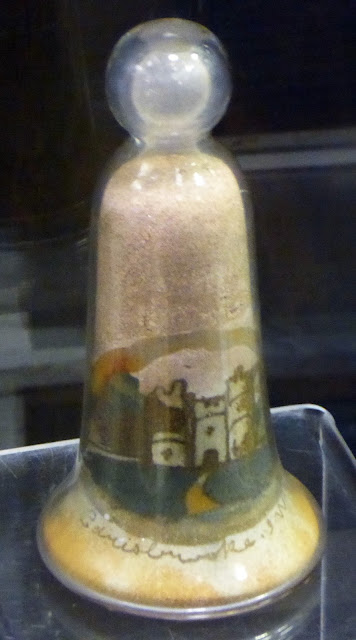 These days, of course, green issues and conservation initiatives are much more prevalent. Sir David Attenborough's 'Blue Planet' series has made many of us more conscious of the fact that unhelpful human behaviour can cause devastation to the wildlife in our oceans, with the haphazard and hazardous distribution of plastic as a particularly alarming issue. I was amazed to discover that the National Trust's Neptune Coastal campaign has now been running for over 50 years.

Incidentally, and speaking of the coast around Britain, if you would be interested in a vibrant new poetry book linked to the Marine Conservation Society's 'Thirty Threatened Species' 30th anniversary project, I would point you in the direction of Susan Richardson's sparkling and punch-packing 2018 collection, Words the Turtle Taught Me, published by Cinnamon Press.

At one time there were 21 different shades of sand at Alum Bay. I am glad to say that the collection of sand from the beach by the general public is forbidden. Climbing on the cliffs is not allowed.

Sand is still available in the shop above for the creation or purchase of souvenirs. These days the coloured sand is taken at the end of the season exclusively from piles that have fallen from the cliffs. 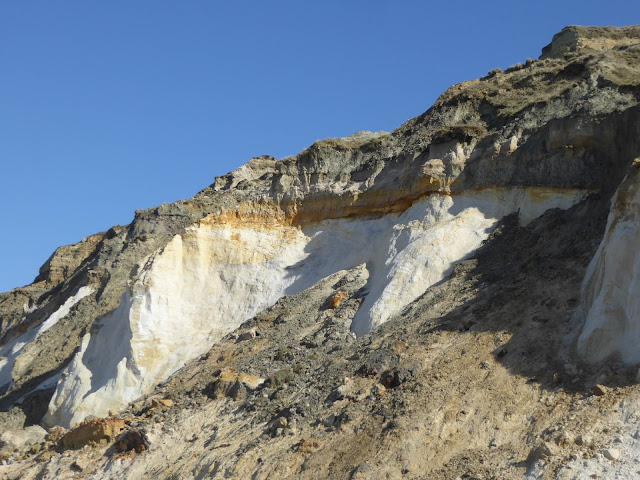 Our visit coincided with a cold but still morning. Suddenly something caught my attention as I stood with my boots on the edge of the shore, keeping a look-out for the ninth wave. I turned round to see a mini sand/landslide on the cliffs behind. The photo above shows the results of this activity. What a beautiful but fragile environment. 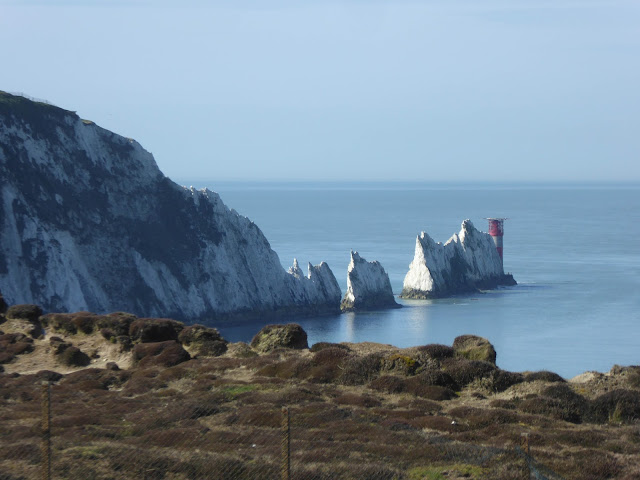 This view above shows the proximity of the Needles to the beach of many colours. 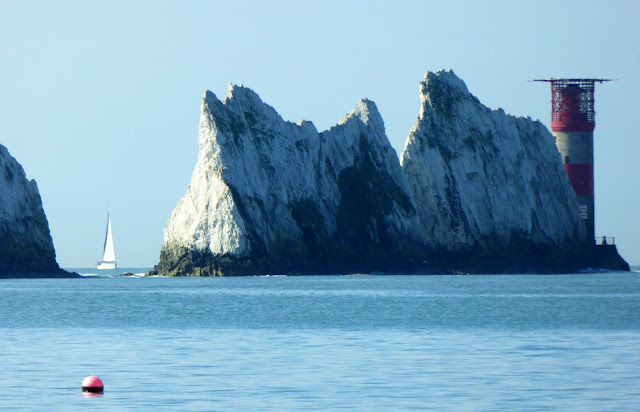 The lighthouse was built in 1859 and the last keeper left in 1994. Its predecessor was constructed high above Scratchell's Bay, where it often disappeared in clouds of mist. 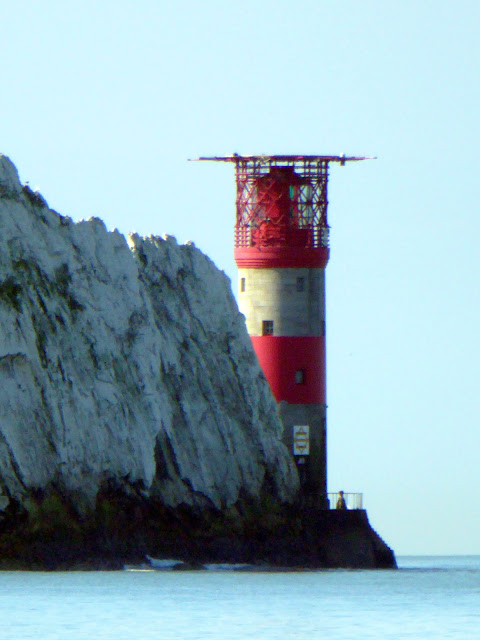 1987 saw the creation of a helipad on top of the lighthouse. 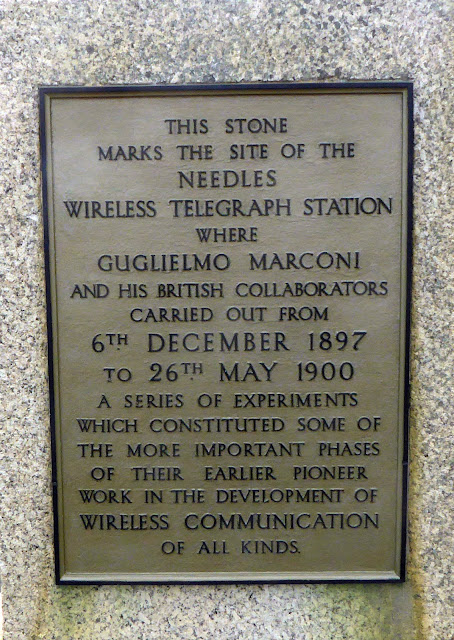 If the lighthouse provided one kind of communication, the wireless telegraph station provided another. 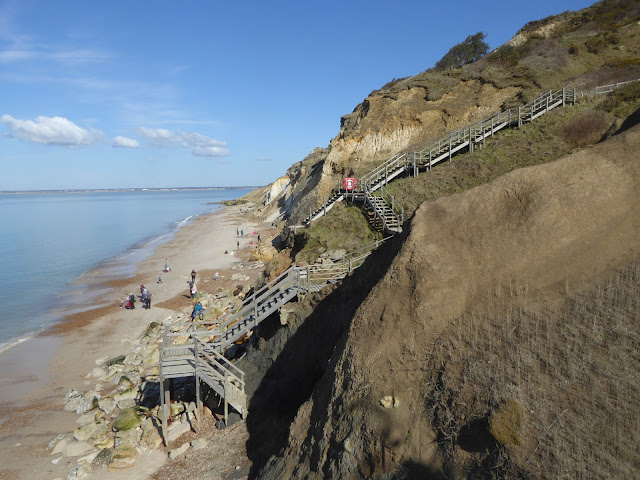 Meanwhile, back on the beach, I was thankful that the chairlift was working so that these steps were not the only way up from the sands! 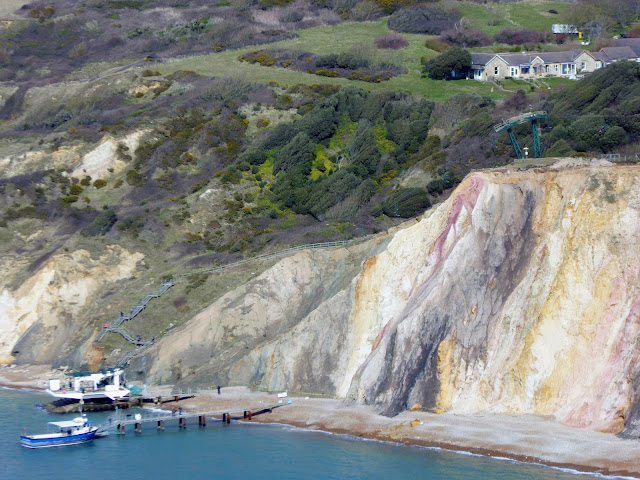 As you can see, the photos immediately above and below were taken from the adjacent down. They show not only the colours but also the fact that early geological activity left the different bands of rock strata almost up on end. 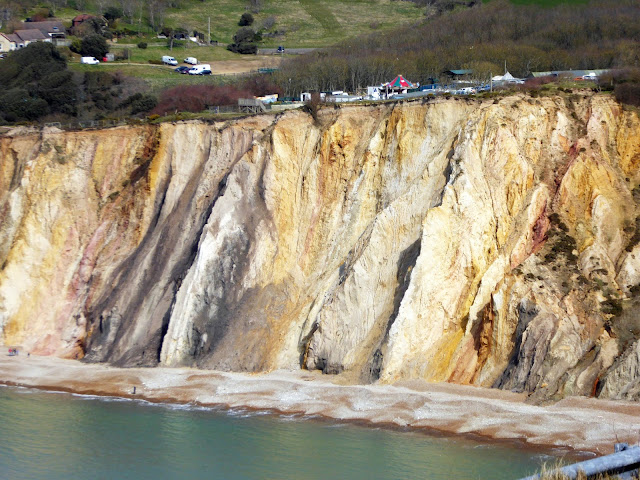 Further along, just beyond the chair lift, there were places where horizontal stratifications could be seen ...

There were a good number of rabbits grazing up on the chalky down near the Old and New Batteries. 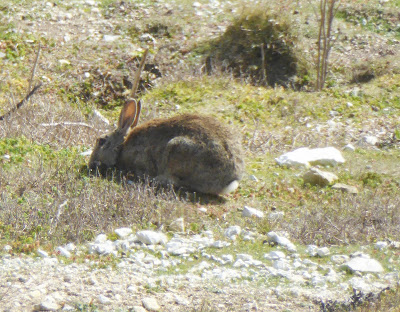 We stood at the Needles viewpoint, looking back at the beach. In contrast to the warm sandy reds and yellows, the cliff here was a mass of cold white chalk which reminded me in some ways of an iceberg. 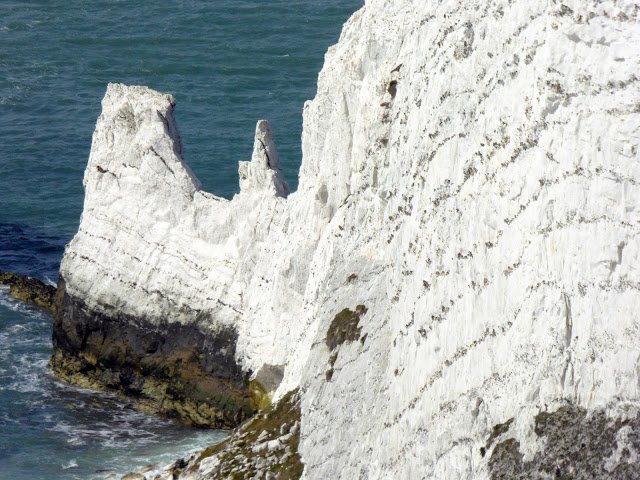 It had been a fascinating and educational experience. David tried out a couple of selfies before we left to find a much needed cup of tea. 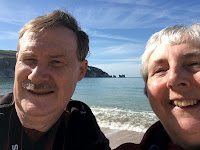 My next post will probably be my penultimate one in this series on the Isle of Wight. I hope to highlight a couple of gardens and the Newtown Nature Reserve.

Sorry for late comment - have been away for a few days and catching up! Another lovely day - the geology of the Isle of Wight is so fascinating.

You are much braver than me - I hate heights and nothing would get me on the chair lift although the family used it. I faced the hard slog of those steps!!!!!