Tree Following ~ April to May

This post is the third in my Tree Following series, part of a wider project run by Lucy Corrander from the Loose and Leafy blog. I am following a Silver Birch in Suffolk, UK, which you can see in the first photo below. You will find the other Tree Follower links for May 2014 here.

On my last 'Tree Following' post I added the Starling (red conservation status) to my list of birds who congregate on or around my tree. The bird visited the feeder on 9 March, returning on 14 March with a mate. Since then a small flock of about five Starlings have discovered the fatballs which hang from the Silver Birch. The Great Spotted Woodpecker, seen previously in March, has re-visited the feeder once this month. We think she was heading for an ivy-clad tree some distance away.

More about my other feathered friends in a moment.


As you can see, spring is burgeoning in the garden, and we are about to move from our rainbow season of sun and April showers into the 'darling buds of May'. Here is a silver birch catkin, dangling down amid the vibrant green of the growing leaves.

I had spotted one Small Tortoiseshell butterfly last month in my Silver Birch patch, and since then there have been one or two more. This one in the photo below alighted on a Dandelion. 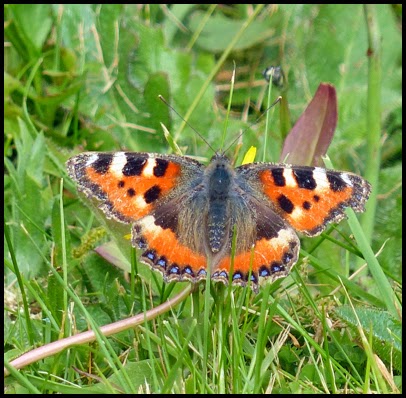 A number of Small Whites have flitted through my garden, but they have been too quick for my camera. I was delighted to see my first Orange Tip of the season just over a week ago. Females are white all over, so who knows, some of my 'Whites' may actually have been other 'Orange Tips' in disguise!

There have been a few Ladybirds in the garden, but only two in the Silver Birch area, including the one in the photo below. It looked suspiciously like a Harlequin with all those spots, and I fear it is indeed just that, with its distinctive 'M' pronotum pattern. I shall be logging it on the Harlequin Ladybird Survey. 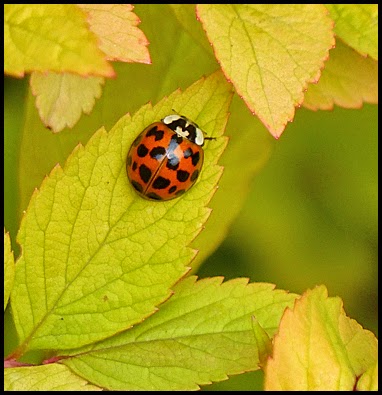 It's always interesting to find a mystery insect! The creature below was flitting about in the grass, just below the Silver Birch one sunny morning some days ago. I don't think the long white projections are antennae: I'm guessing they were just part of the undergrowth, but who knows. If you can help with an ID, I would be delighted. The insect was little more than the size of a finger nail. It looks to me a bit like a sailor or soldier beetle, but I'm not convinced that its colouring fits. I also wondered if it could be a micro-moth ... 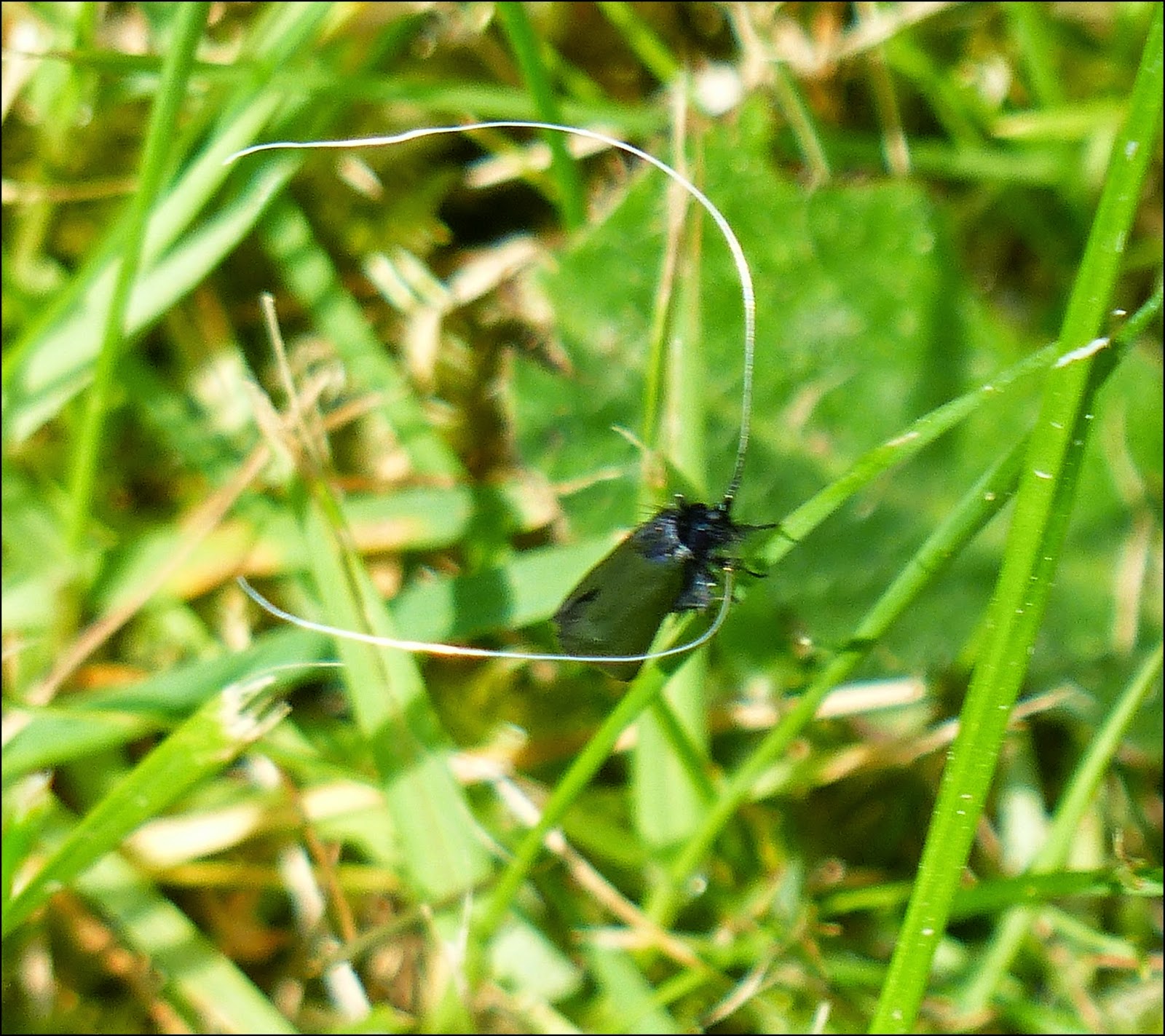 Moths are becoming active, and this one below was making its way through the mossy undergrowth that the birds had disturbed, presumably as nest linings of choice. 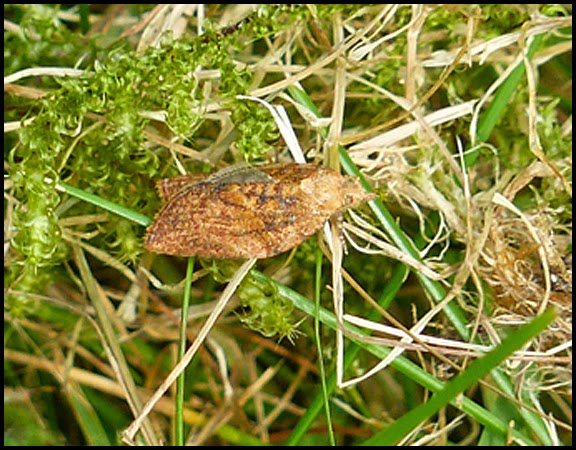 During the course of the month, possibly as a result of the Magpies who have been dive-bombing the feeders, this piece of bark covering fell to the ground. I decided to leave it where it was lying in the hope that it would provide a good home for an insect of one kind or another. 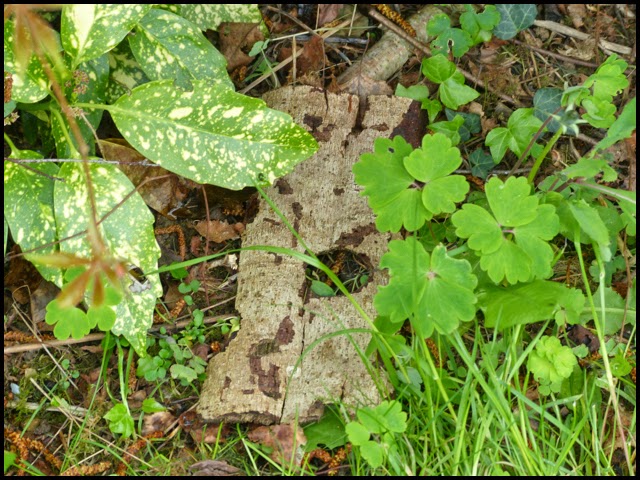 The feisty Robin has not deserted the Silver Birch. Here he is looking particularly shifty ... 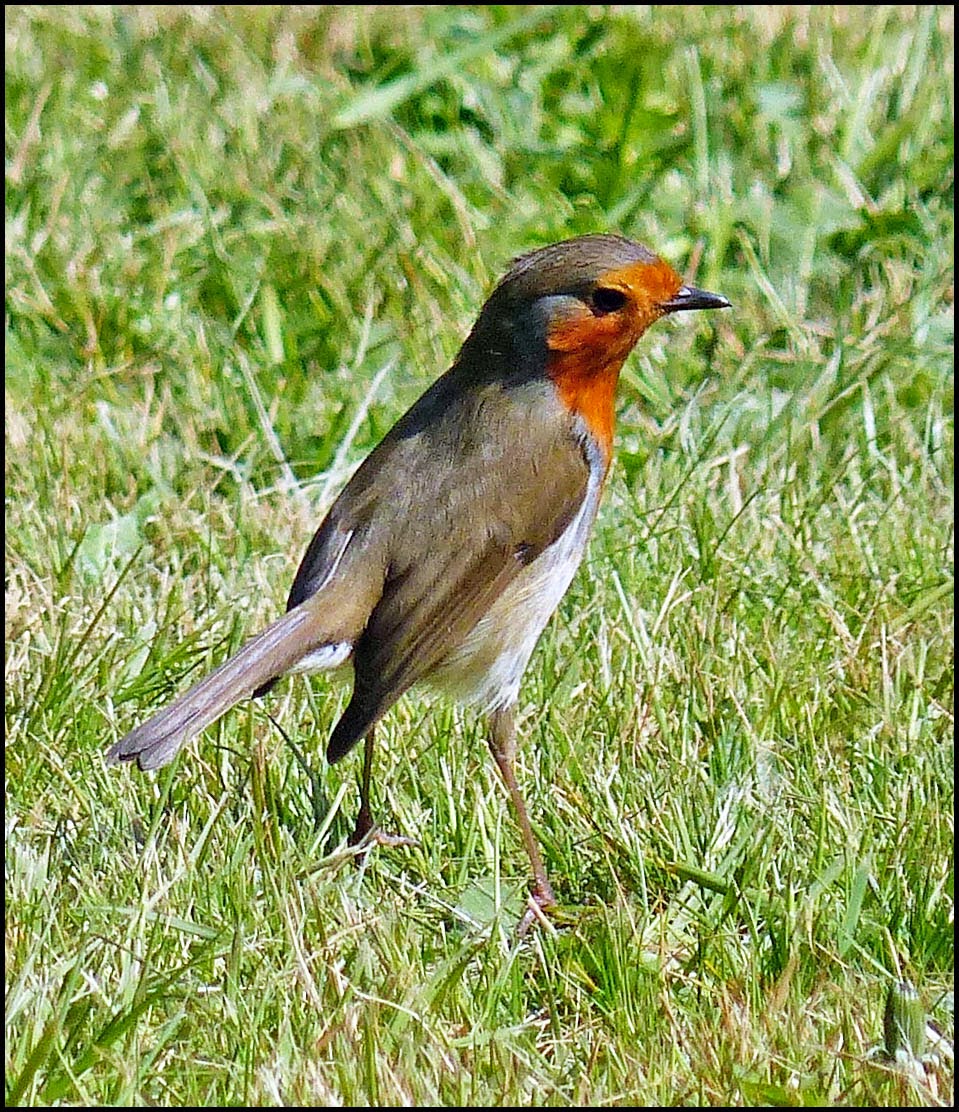 ... and here is one of the Starlings. You can see from the drooping stems on the lower left of the photo below that April's Daffodils have given way to a carpet of Daisies and Dandelions. 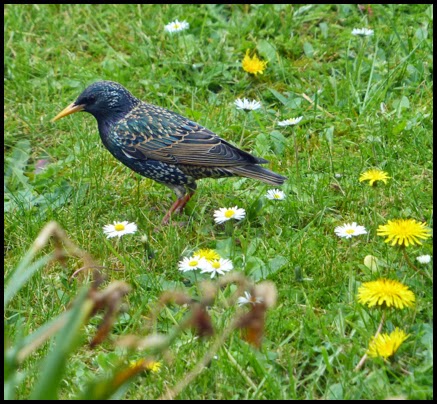 I only learned recently that the Starling's bill turns yellow in the breeding season. 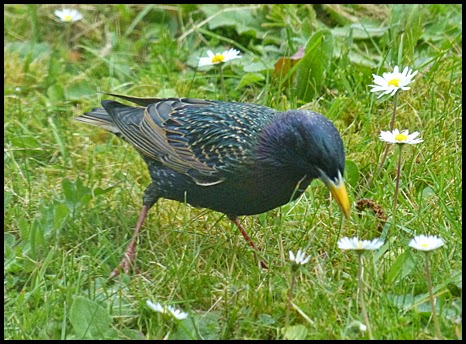 These birds will do all kinds of acrobatics for a sliver of coconut! 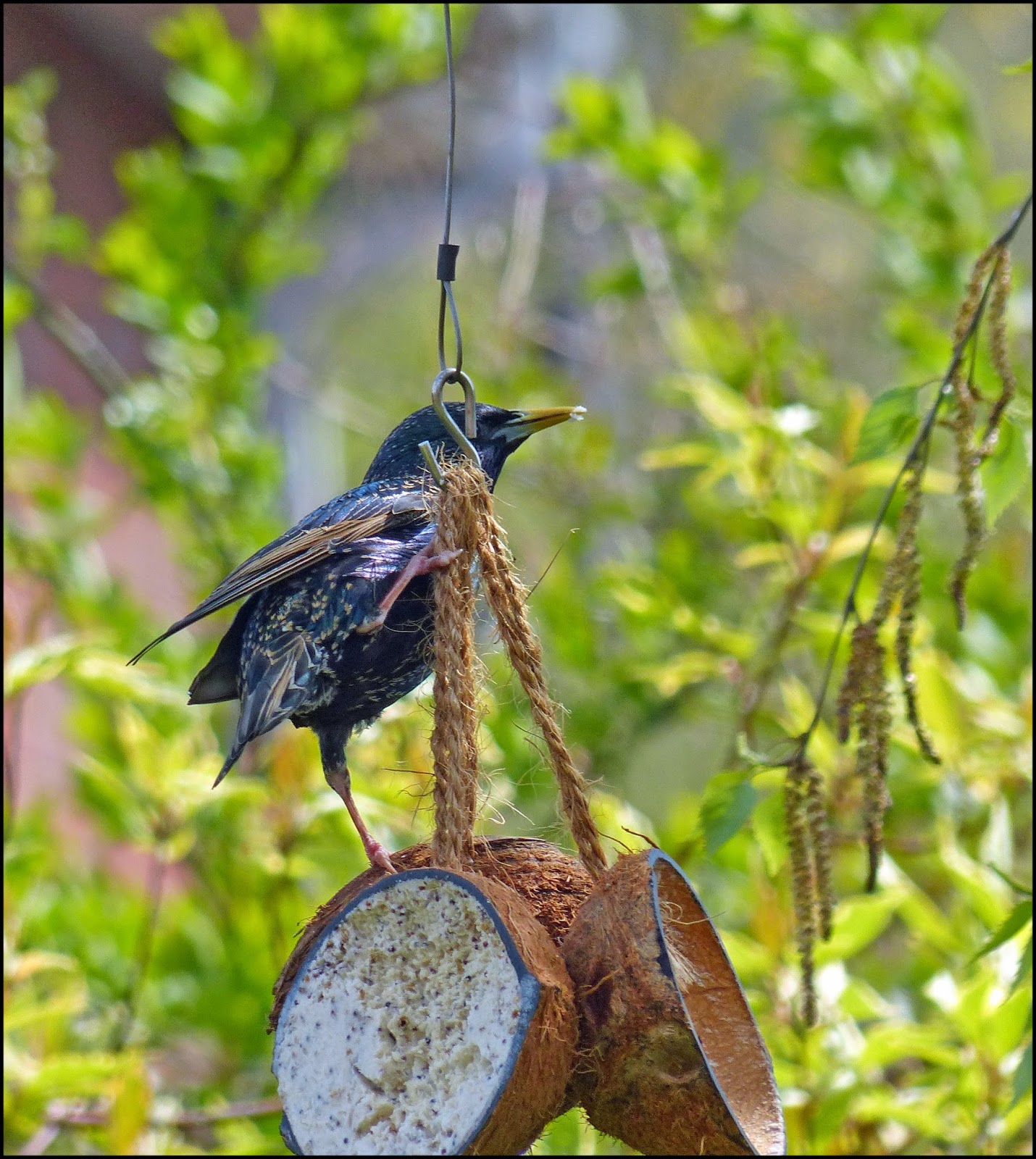 The Silver Birch is providing a vibrant green backdrop in my garden, but there are other shades, too, such as the emerging blue of the Ceanothus ... 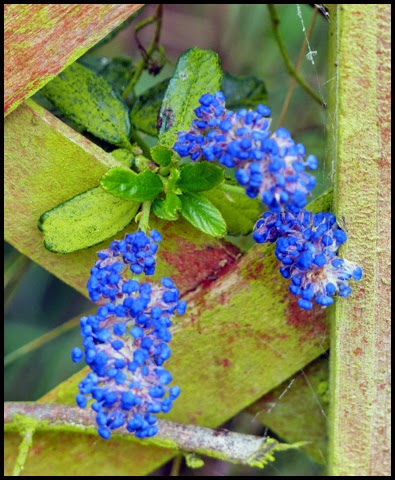 ... and the Easter white of our miniature cherry, which produced blossom for the first time this spring. 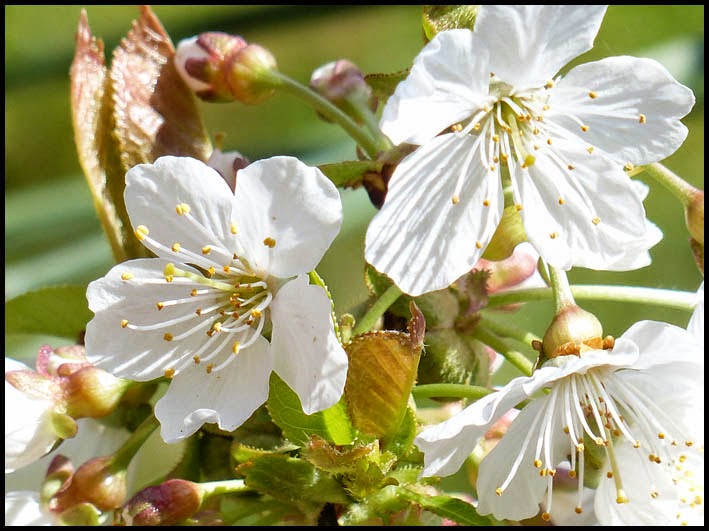 As one flower open, another turns to the dispersal of seeds ... 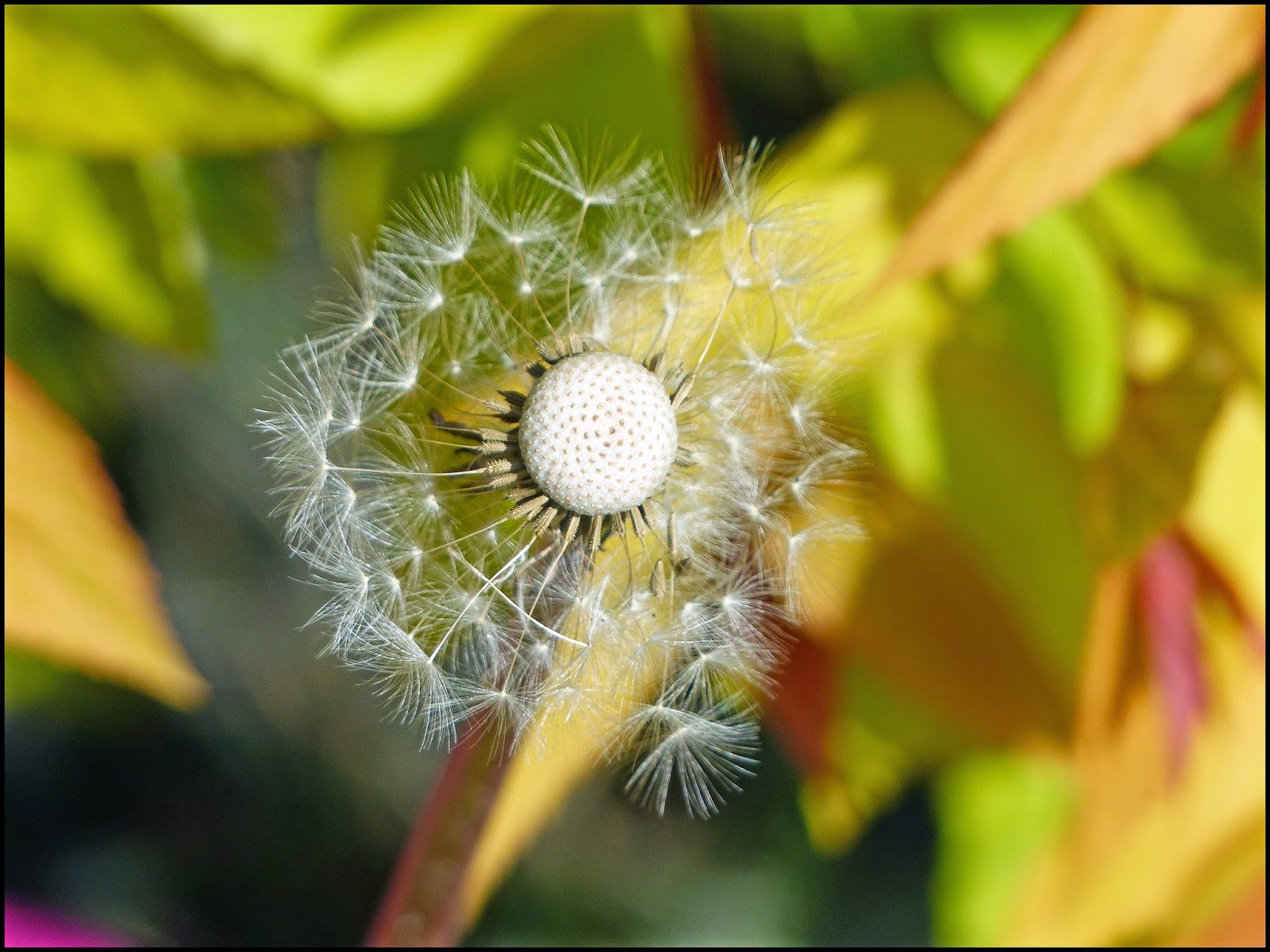 The Silver Birch, however, continues to display male and female catkins. The male ones are golden brown: they hang down while the female ones are slender and green. The female ones point skywards, as in the photo below. 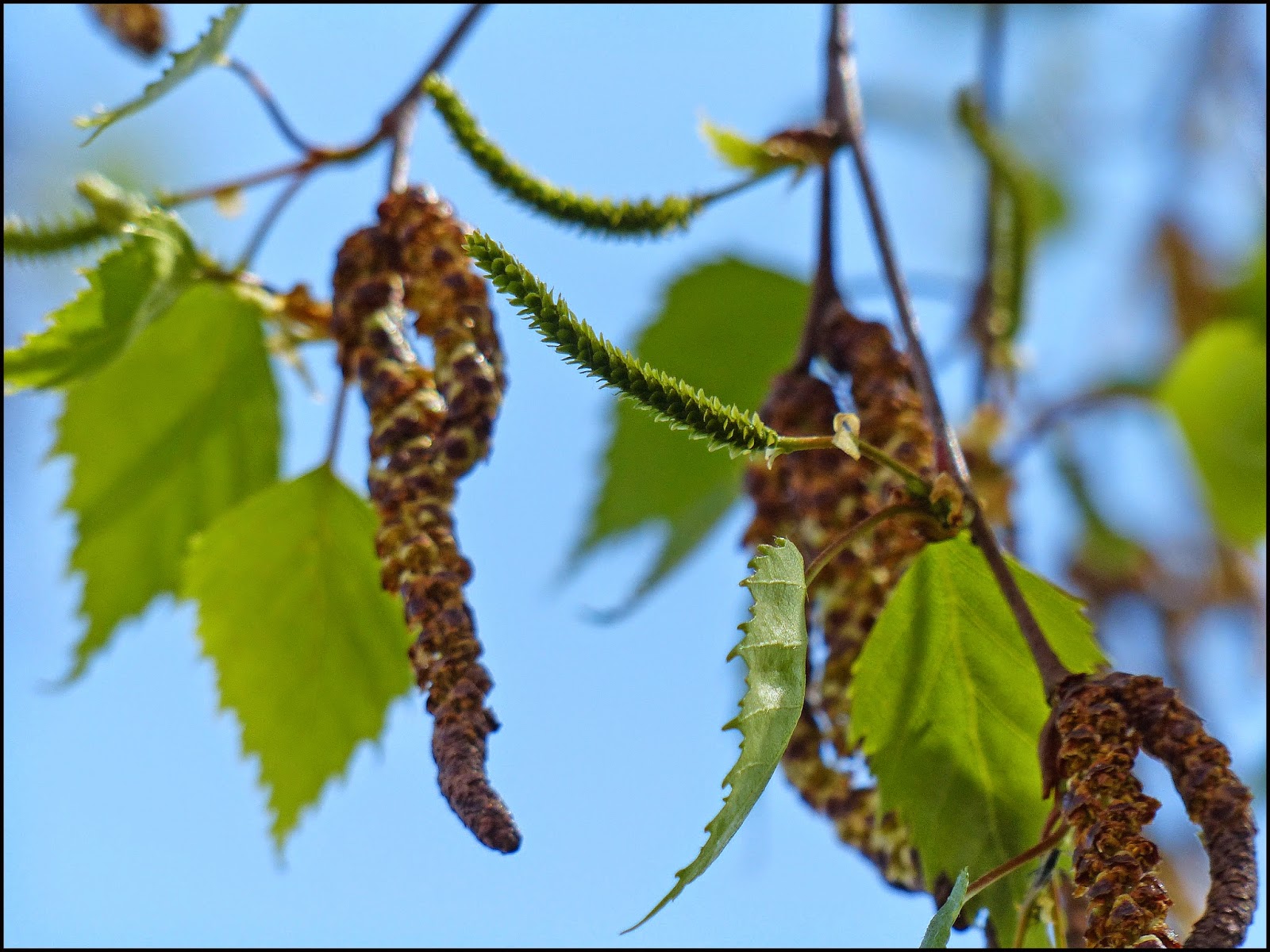 There are quite a few male catkins on the grass ... 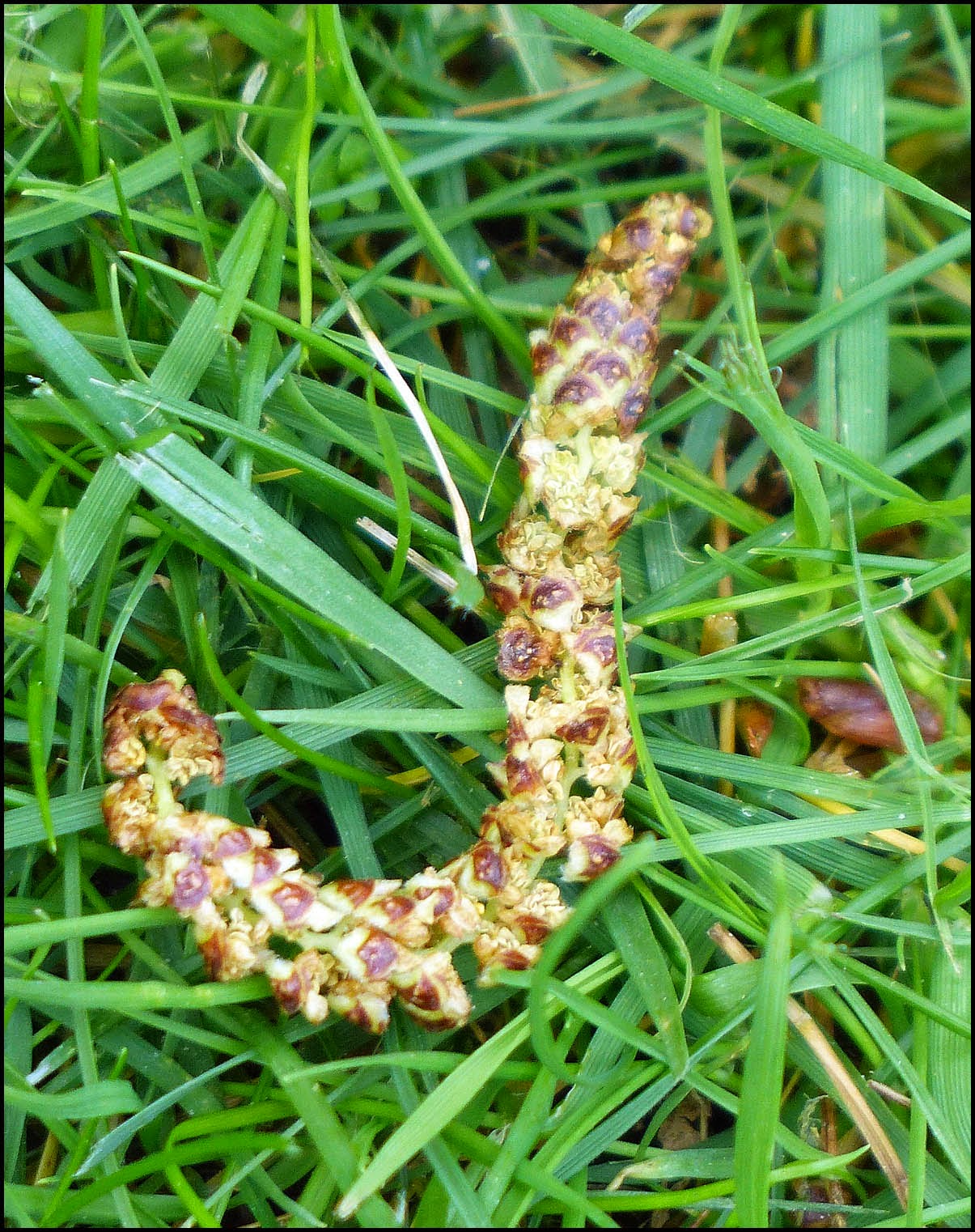 ... but there are still plenty left on the tree. 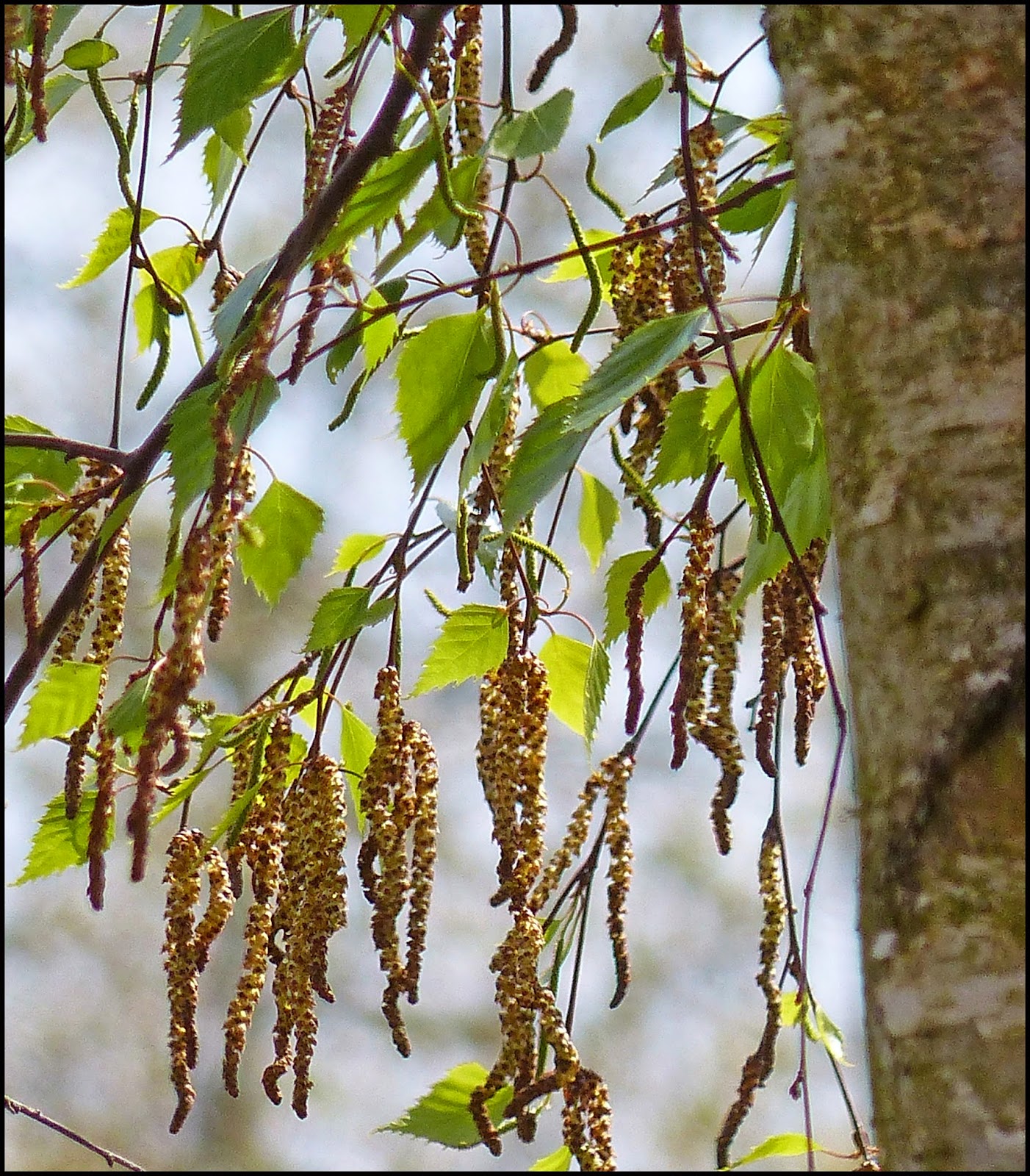 I knew very little about Silver Birch trees before I began to take part in Lucy's Tree Following project. It has opened my eyes and made me more aware of the trees around me. On a recent visit to Anglesey Abbey near Cambridge, I had the chance to re-visit my favourite stand of birch trees. I think you will agree that they are worth a peep through the open door. 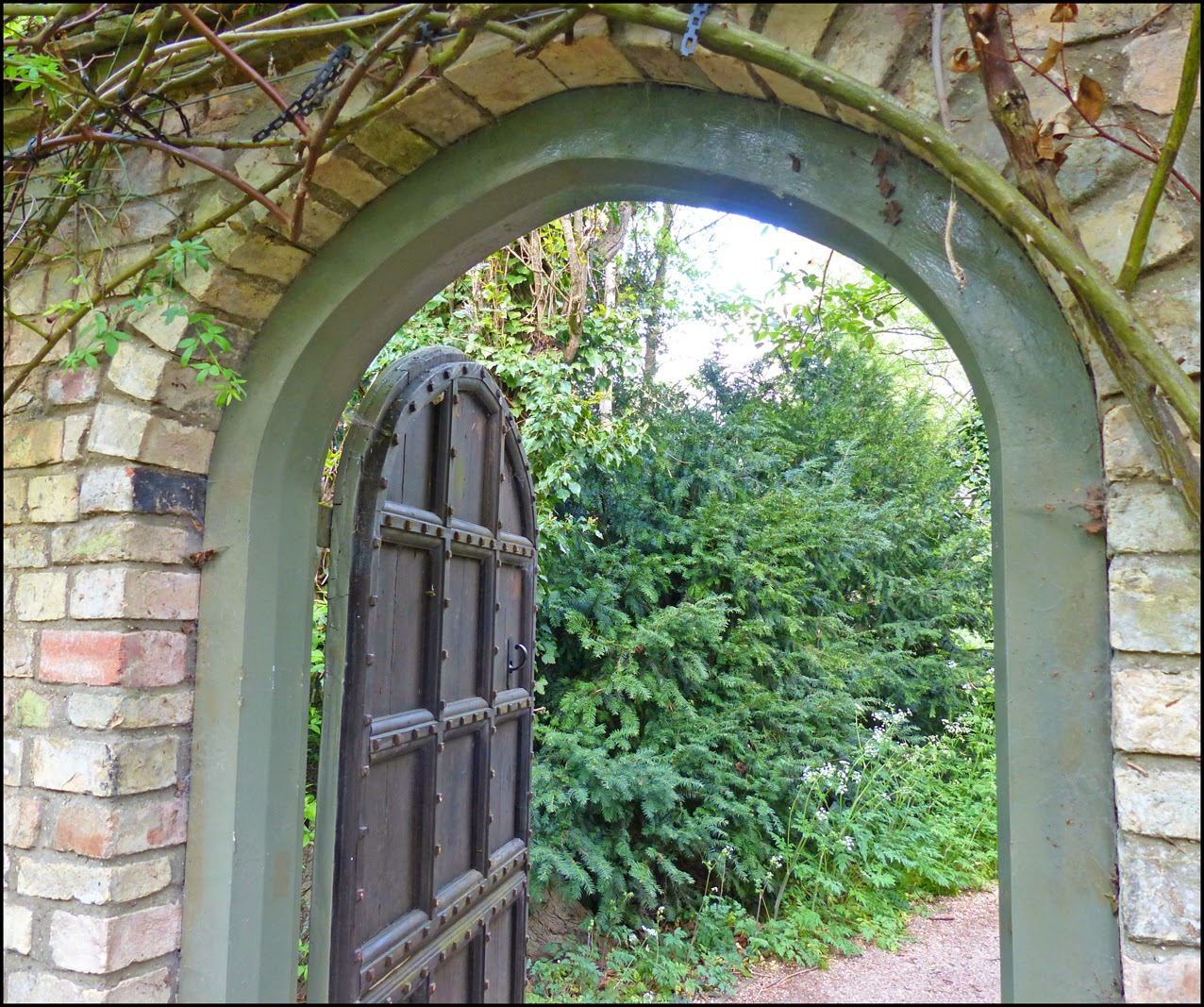 So here we are, with David posing for me, in this enchanting grove. Last time I was here it was winter, when the white trunks took on a stark appearance. This time they sparkled, set off by the vibrant shade of tulip below.

These trees come from the Himalayas, but you can easily see the similarities when you compare them with my tree - the silvery bark and the 'feathery' effect of the leaves. 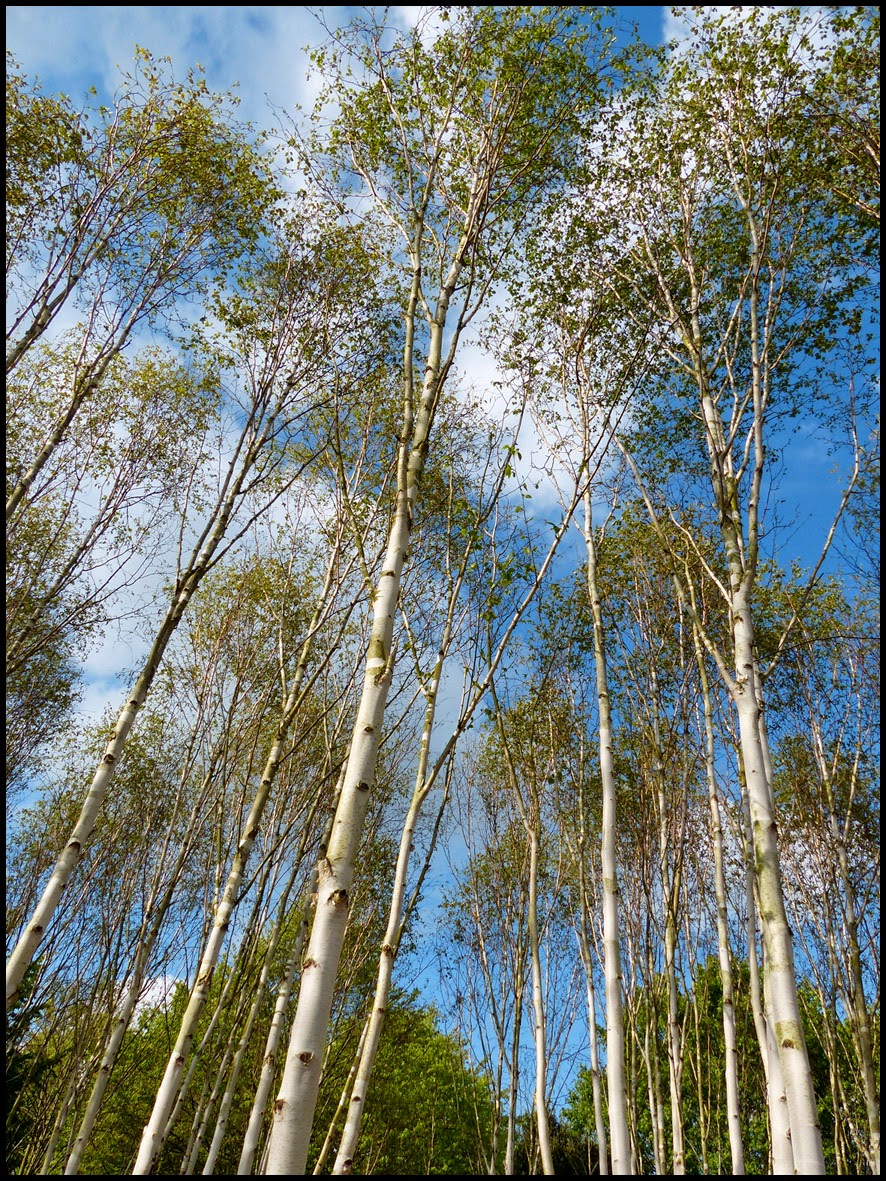 I love looking up through this light canopy to the sky ... 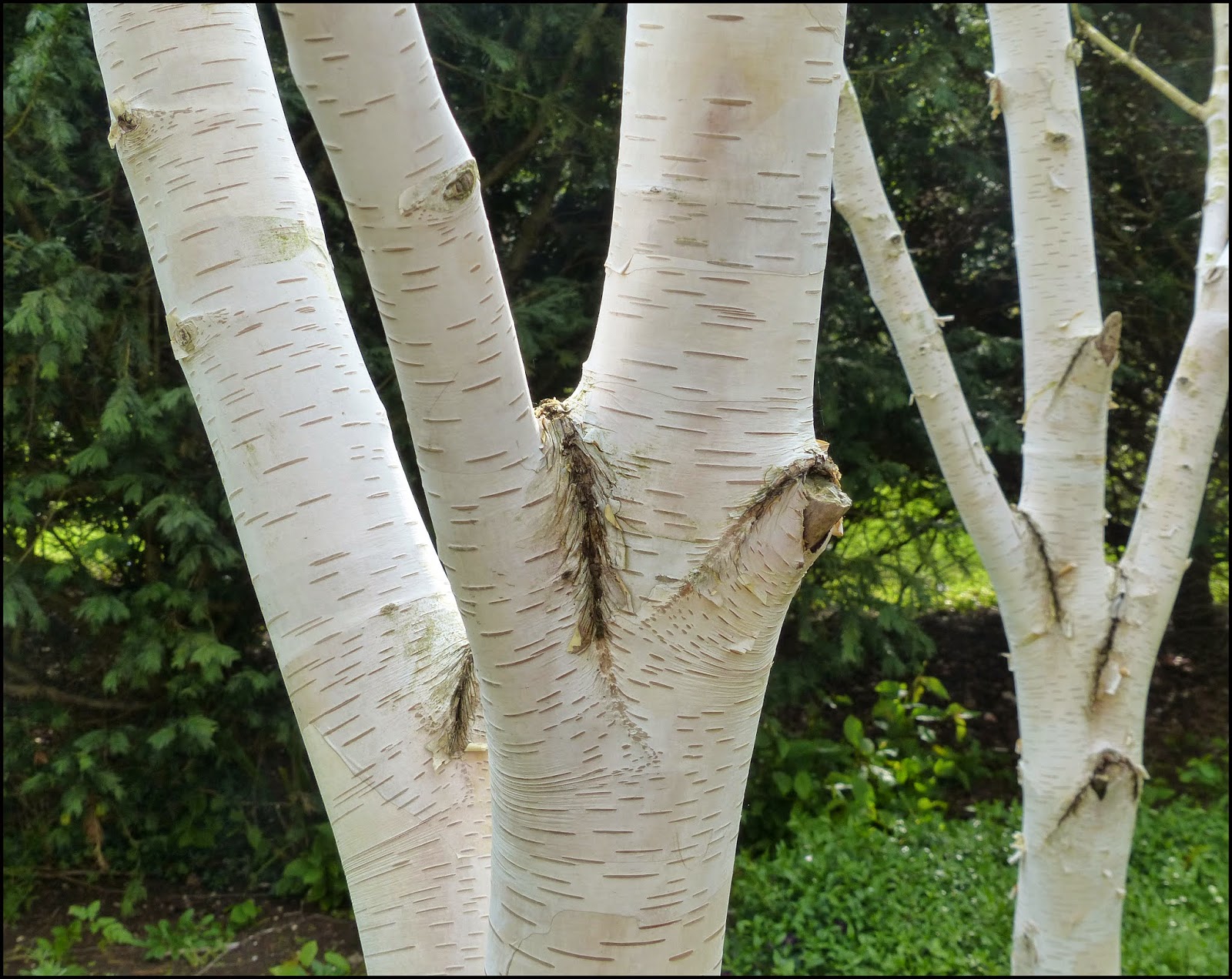 ... and I also enjoy taking a close look at the papery bark. The layers remind me of the skin of an onion. 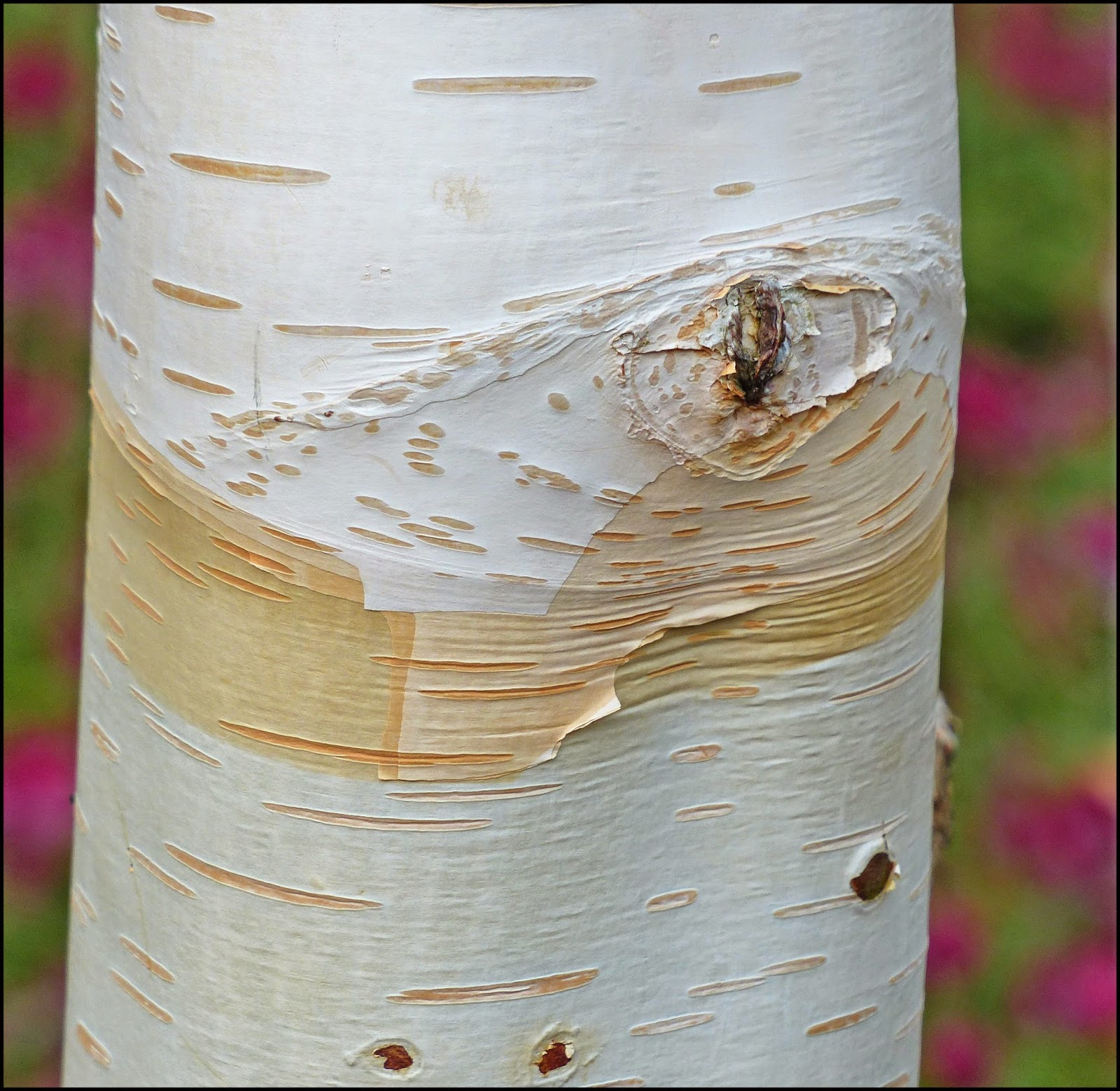 The horizontal lines in the photo above, which are also present on my Silver Birch, are called lenticels. You also find lenticel blemishes on the skin of fruit such as apples. These pore marks or breaks in the surface allow key gases like oxygen to penetrate the trunk and reach the cells inside. 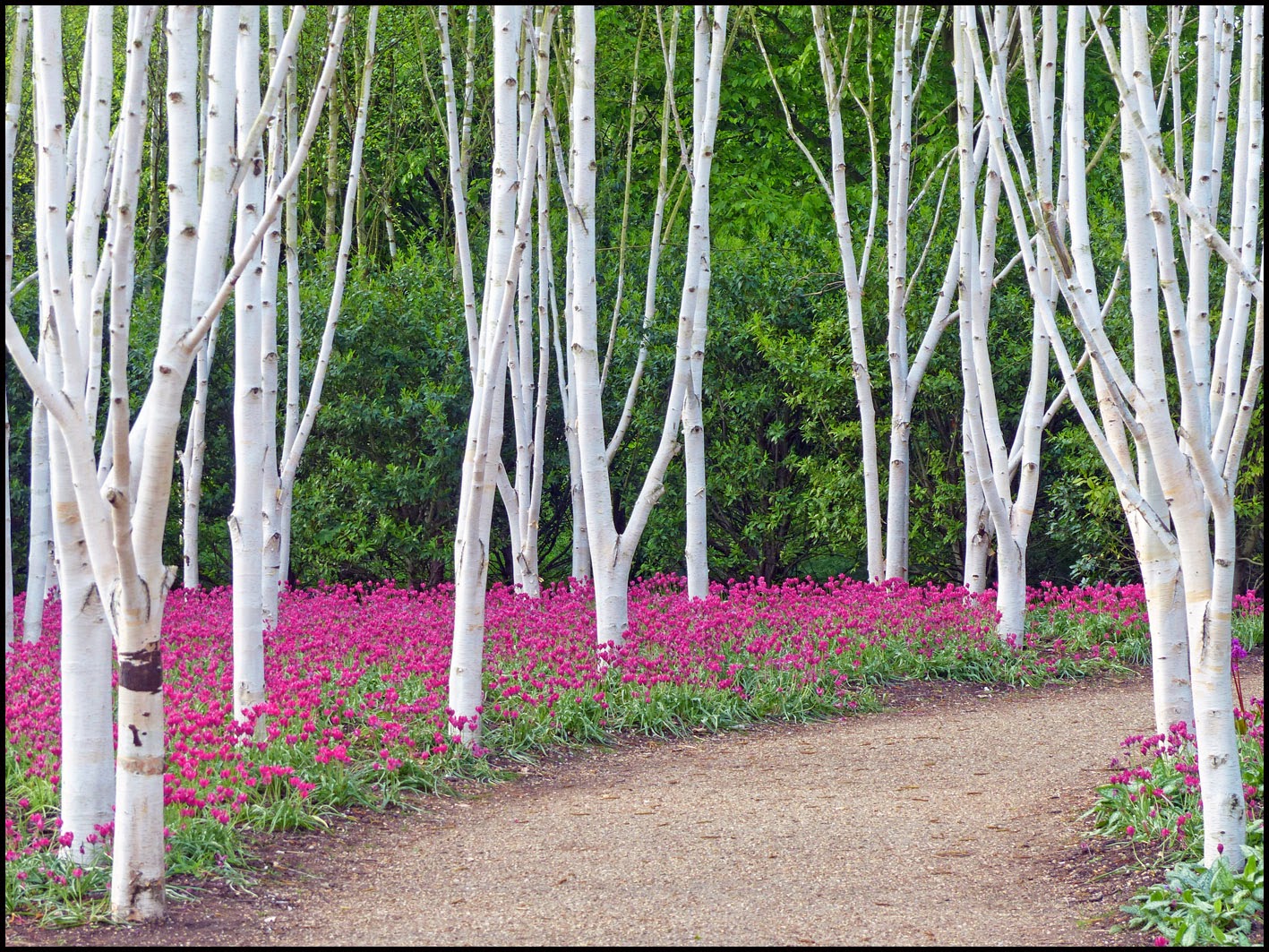 I have enjoyed comparing and contrasting the appearance of my pockmarked European Silver Birch (Betula pendula) with these pristine birch trees (Betula utilis var jaquemontii) from the upland Himalayan regions of Asia. The word utilis immediately implies 'use' or 'usefulness', and I am not surprised to discover that the bark was turned into writing material for Sanskrit texts. This Asian species of birch has also been a key source of firewood. 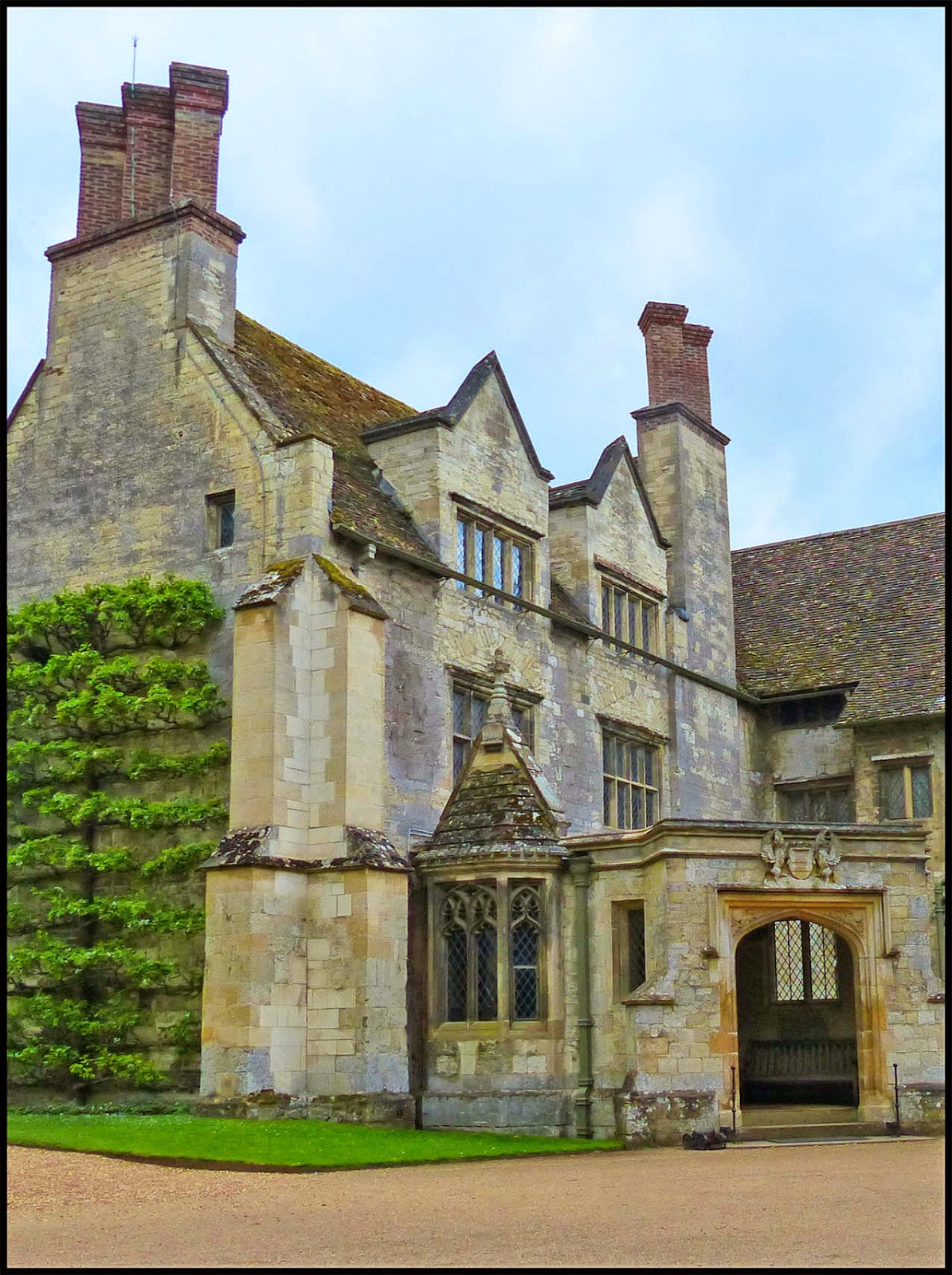 The photo above shows a corner of the Abbey, and the one below shows leafy walk along the stream by the mill, with what I take to be the same species as 'my' birch, Betula pendula. 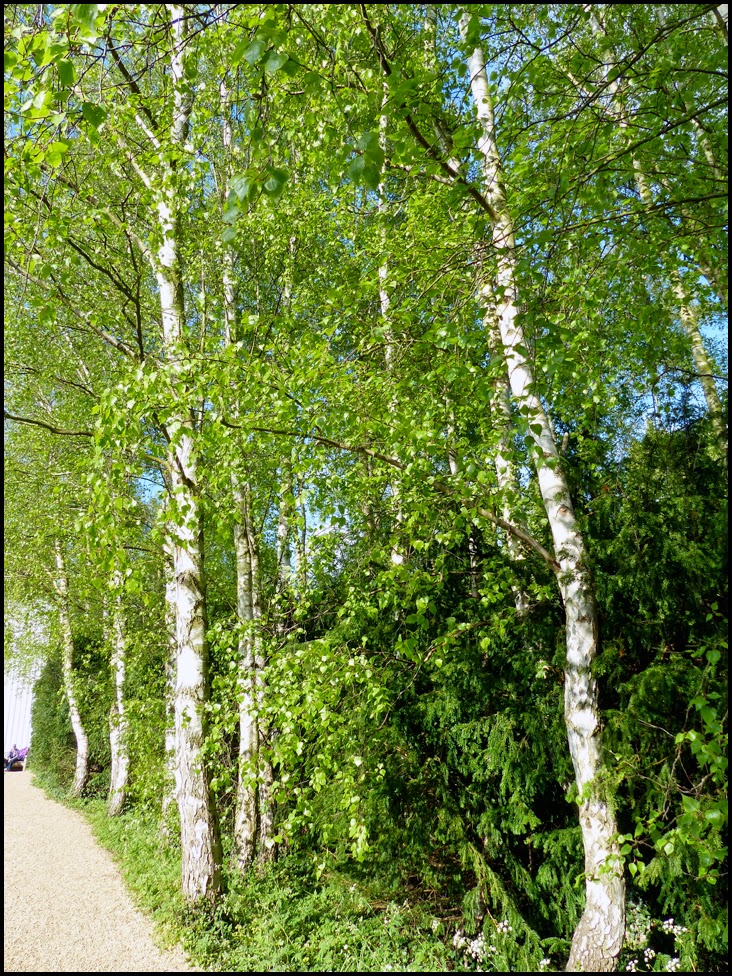 Next month's post will be about the summer, as we move from May in all its verdure into the heat of flaming June. The year is whizzing by! 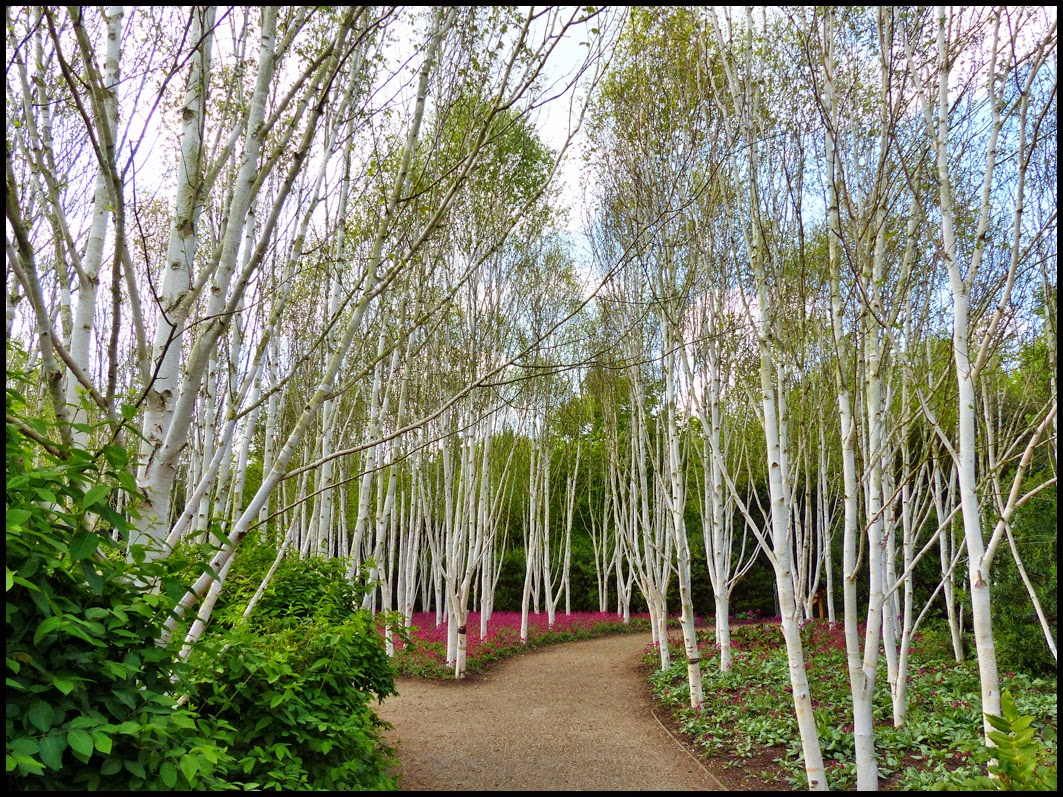 Hello Caroline, the birch trees are gorgeous.. I love the bark on these trees, wonderful variety of birds and a pretty butterfly.. Beautiful series of photos.

Very elegant - the way the leafed branches droop. And I hadn't realised female catkings point up and male down. Interesting because one would have expected it the other way - so pollen would fall in the right direction. Maybe this is why people are mentioning hay fever in connection with birch. It has to be able to fly lightly in the wind in order for little birch trees to grow and it's literally getting up people's noses!

Oh, what a lovely tree, reminds me of Norway where I am from, silver birch is the most common tree in Norway. I live in East London and around here I have never seen any silver birches, although I am sure there are some in people’s gardens. I have never submitted photos and details to the Harlequin survey, perhaps I should, I hardly ever see native ladybirds anymore in my London garden, just harlequins.

Thank you for such an interesting post. Your silver birch is obviously a magnet for wildlife.

The Himalayan silver birches at Anglesea Abbey are stunning!

Those birch trees at Anglesey Abbey are amazing, I've not visited there for years but I remember the grounds being very beautiful.

Your mystery insect is weird, those are its antennae, I think it's some sort of longhorn beetle, though i don't know the species

though I may be entirely wrong about the id of the mystery insect...

The silver birch trees are so beautiful, especially against the vibrant colour of the tulips. Fantastic photos.
Cathy

Wow! Anglesey Abbey jacquemontiis look fantastic. We have one planted as a specimen, but I must get out and clean the bark, as those are way whiter and brighter than mine!
Fantastic photos of the varied wildlife making its home in your birch!

I learnt loads from this post, was particularly fascinated to read about the male and female catkins, I will have to look out for that once my trio of jaquemontii are old enough to grow some. And I had no idea about the blackbird beaks changing colour, will have to watch out for that too, thank you! And that underplanting of the birches at Anglesey Abbey is inspiring, more for the notebook...

a thorooughly enjoyable nature notes posts around your chosen Birch tree. I too find the observational process of tree following opens the eyes and other senses