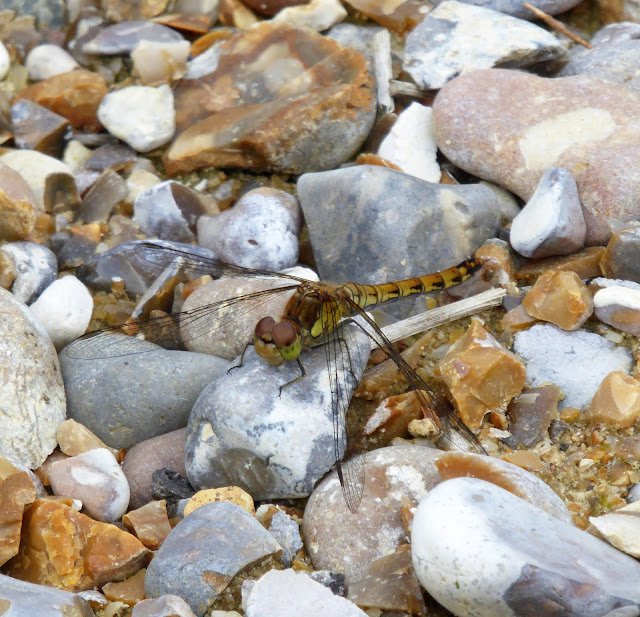 Regular readers will know that I have a certain fascination for odonata. I have missed seeing so many species this summer as a result of our limited expeditions on account of the pandemic. It was a particular joy this afternoon, therefore, to see a few Common Darter dragonflies at the edge of Rendlesham Forest. You can see the female above and the male of the species below. 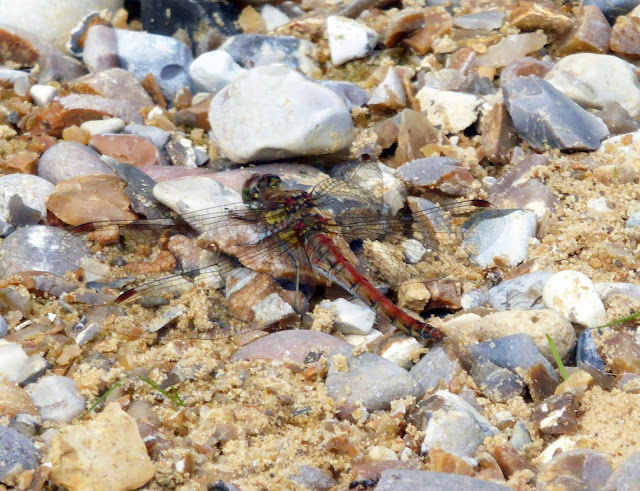 It was a pretty nondescript Bank Holiday weatherwise here in Suffolk, with occasional patches of sunshine, large swathes of grey cloud and even a shower of rain. The photo below shows where the gravel path from the road gives way to a grassy track over sandy soil. The dragonflies favoured the stony ground as you can see in the photo above (it almost looks like shingle on a beach). At times they were extremely camouflaged. 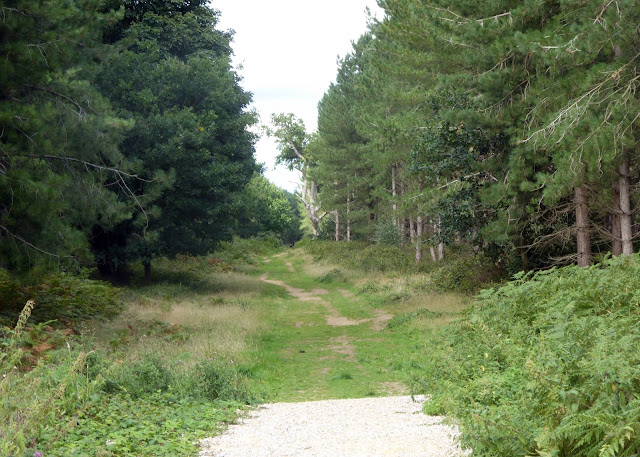 Rendlesham Forest, owned and managed by the Forestry Commission, is 1500 hectares in size. There are various trails and tracks that can be followed. Despite keeping a sharp eye on the path, I nearly stepped on the insect below. I moved back quickly, and we noticed it seemed to be digging. I wish my camera did justice to this kind of scene, but my better one is too heavy to carry! 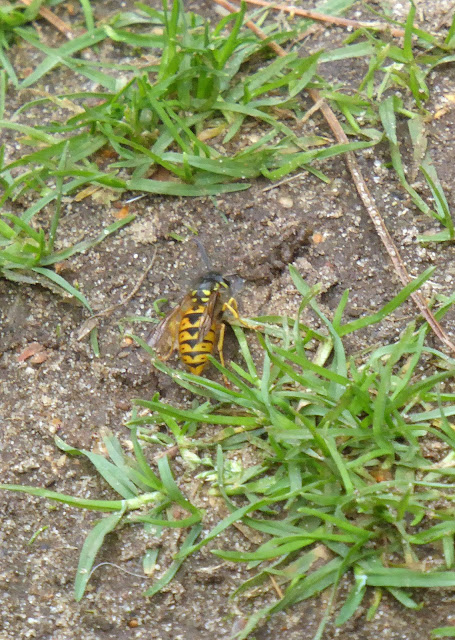 Is it a digger wasp of some sort? It looked a bit like a hornet, but seemed rather small. I considered Bee Wolf since we see these occasionally nearer the coast, but the markings do not seem right. It looks in appearance, if not in behaviour, rather like a Common Wasp to me. I will try iSpot next... 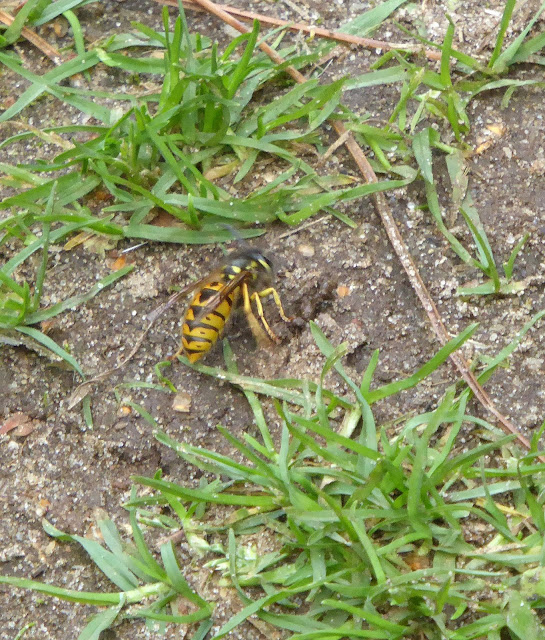 Does it look to you as though digging is in progress? 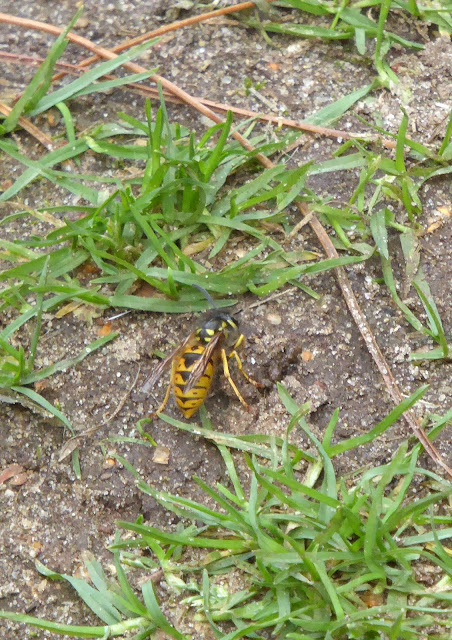 I was pleased to find this bee near the entrance to the forest... 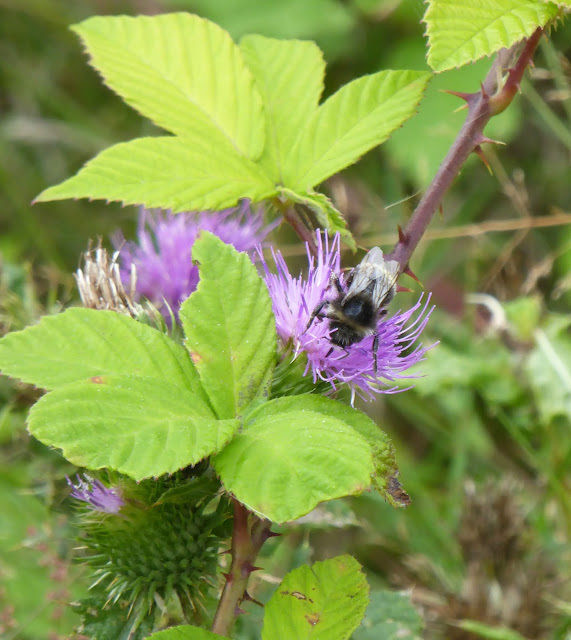 ... where there were quite large patches of Common Toadflax. 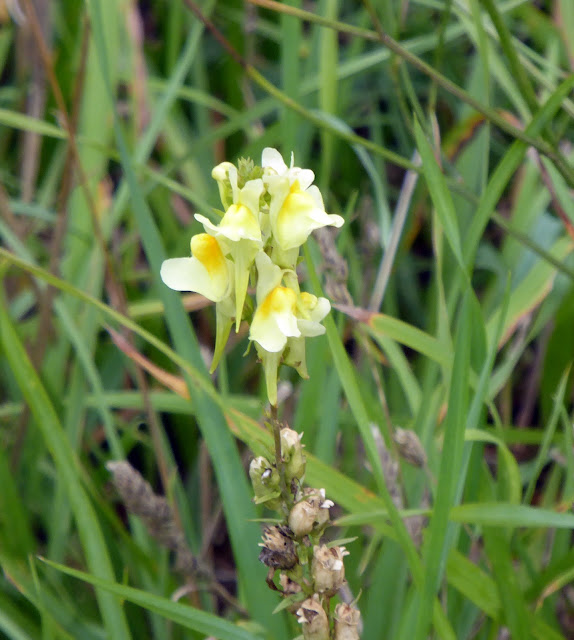 We noticed an Oak tree on the edge of the pines. There must have been a Grey Squirrel in the branches above as bits of acorn kept landing near our feet. 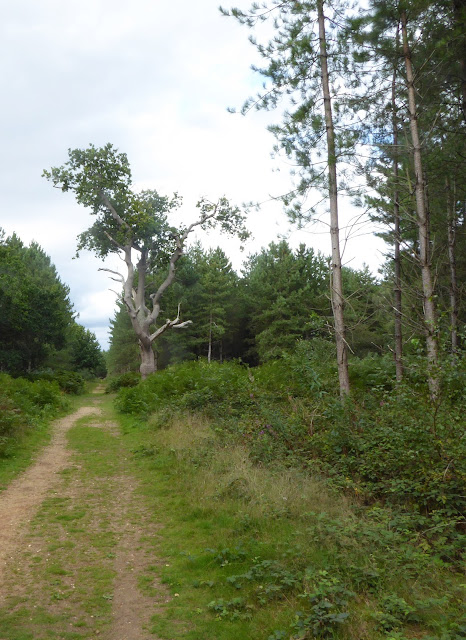 There were other telltale squirrel signs as well... 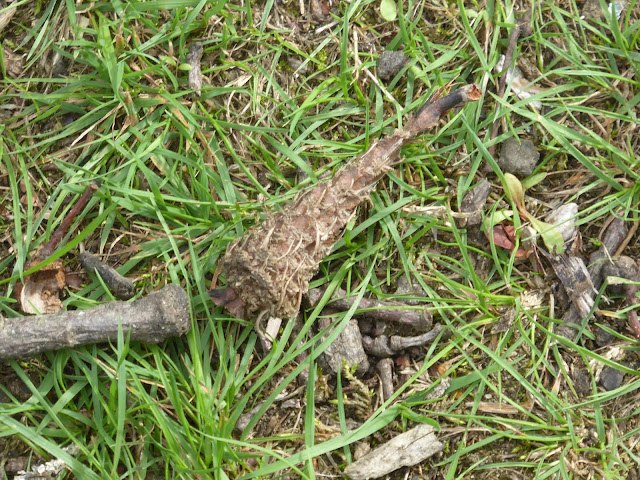 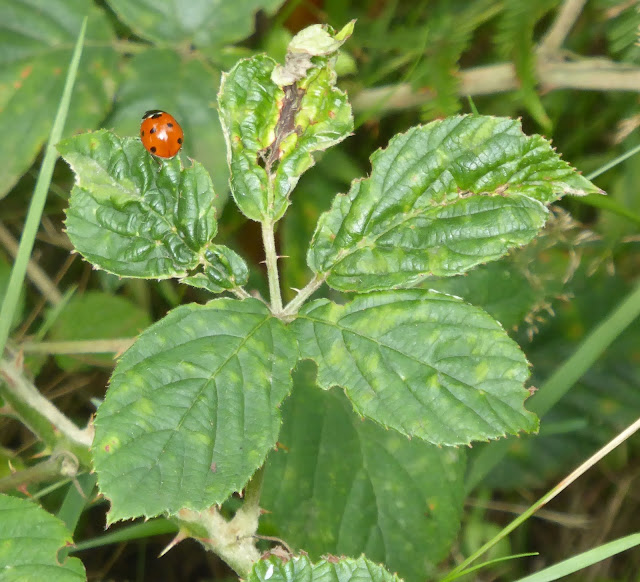 I noticed a small Pine Ladybird in the garden this morning, the first ladybird I had seen for weeks, so it was good to find a couple of 7-spots in the forest. 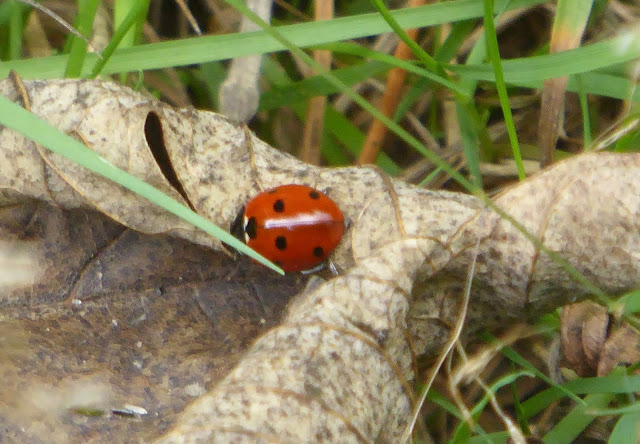 I'm guessing the flower below is Red Campion, though I don't remember the receptacle being so bulbous. 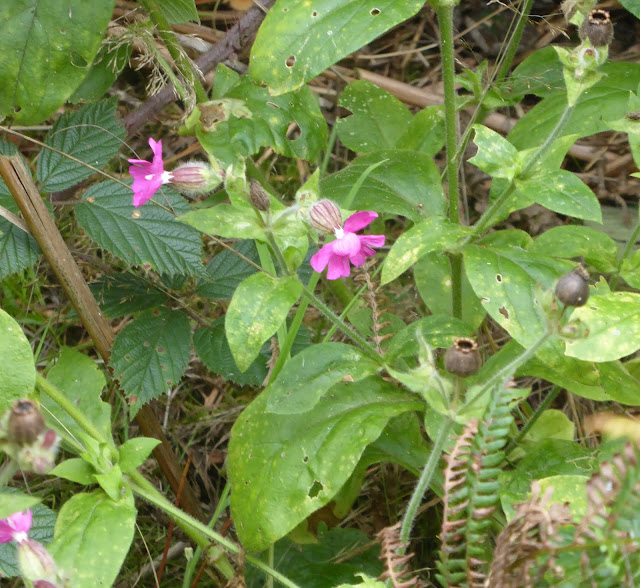 David and I both remarked on the fact that a cultivated forest can seem a little 'sterile', but the addition of Oaks, Sycamore and Silver Birch meant that there were patches of undergrowth. These other species were clearly enhancing the biodiversity.

It was good to hear the caw-cawing of corvids overhead and we think we heard a mouse, shrew or vole in the bracken. The photo above shows how the different plants mingled in and out of one another along the verges of the grassy path.
Posted by Caroline Gill at 23:05

Lovely photos, Caroline. Particularly nice to see the dragonflies, we've not seen many this year for the same reason! I think cultivated forests in the UK these days tend to be deliberately planted with some native species to increase the biodiversity

It looks a lovely walk from your great photos. Glad you caught up with some dragonflies - all the ones I am seeing around at the moment are just whizzing around without stopping!! Isn't Rendlesham Forest the place where there was a mysterious "UFO" type sighting some years ago??

Your sharp focus on nature is a delight, Caroline.

The dragonfly, for me, is a childhood memory, in Glendale, California. I remember their iridescence. And the Lantana surrounding us.

Yes, RR, you are indeed right on that count! The memory lives on... Also, Bede mentioned an Anglo-Saxon Royal settlement within the parish of Rendlesham and there have been digs and finds. It's an interesting area, and so near Sutton Hoo and Snape Maltings.