An Afternoon at Dunwich Heath (and Minsmere)

Like many others, we have been feeling somewhat confined to base on account of the recent storms and high winds, so it was a joy to see the sunshine over the weekend. We headed for the coast at Dunwich Heath. 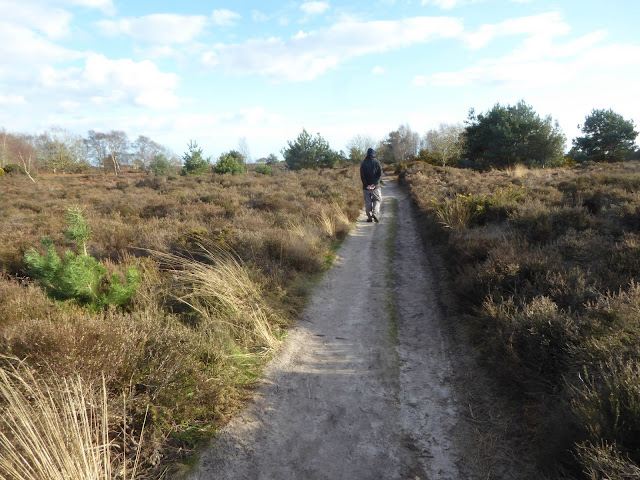 It felt quite bracing to start with, but the sun soon helped the temperatures to rise (though I gather some snow is forecast in our region tomorrow). 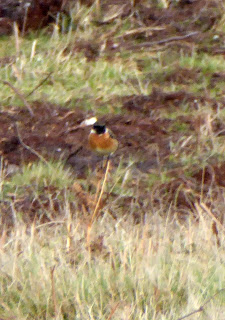 It didn't take David long to spot a Stonechat, and in fact there were two. They were quite a distance from us, so I apologise for what is barely a record shot. 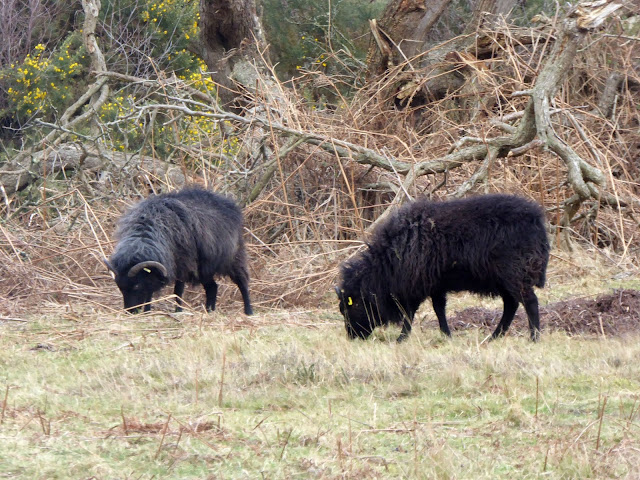 The National Trust have these beautiful Hebrideans to maintain a healthy heathland ecology. 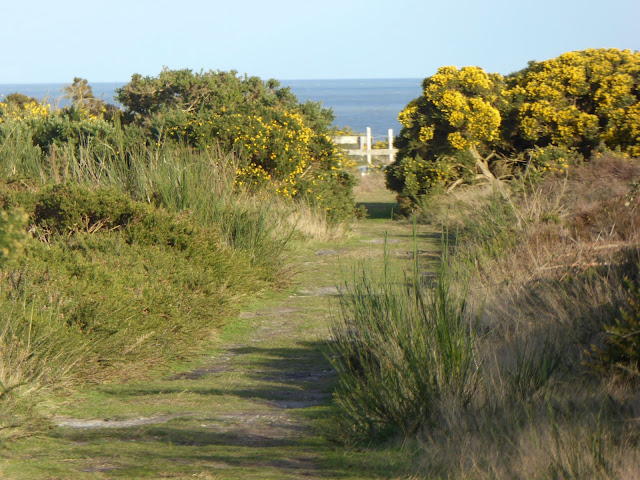 There was gorse in abundance, along with that warm coconut aroma that it seems to give off in the sunshine. 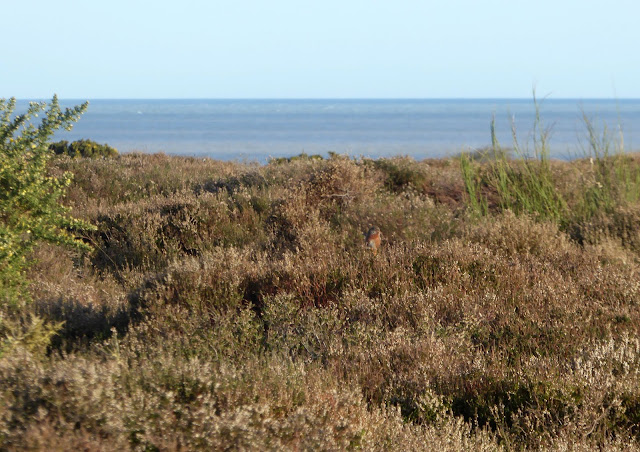 Suddenly we heard a distinctive call and I spotted a Dartford Warbler. 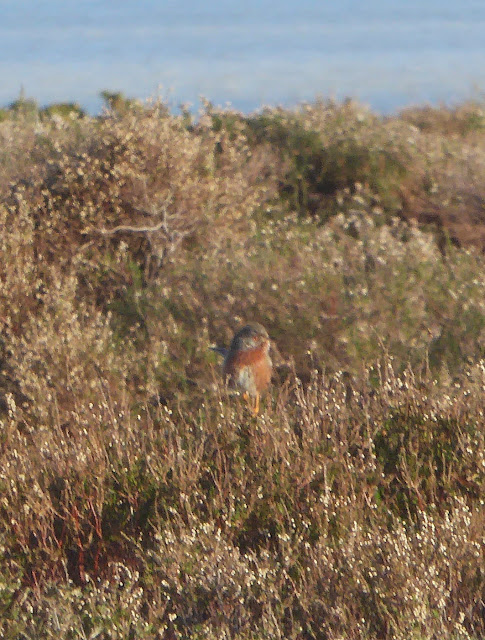 The photo above has been considerably enlarged (and cropped) from the one above, but it gives an impression of the beady eye and those orange legs. 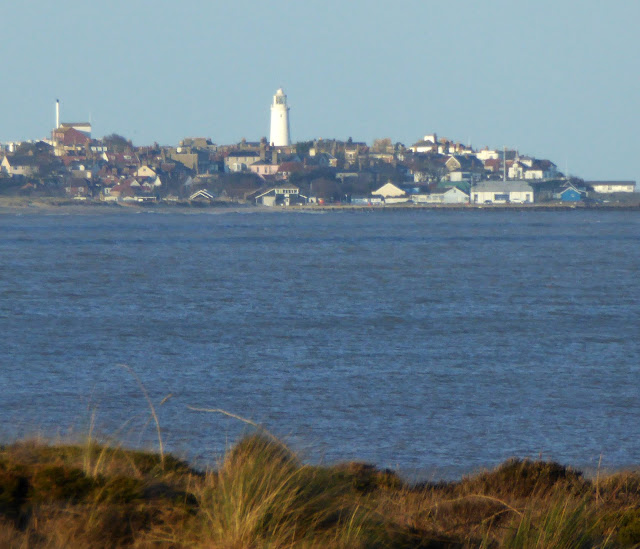 You get good views of Southwold from Dunwich. 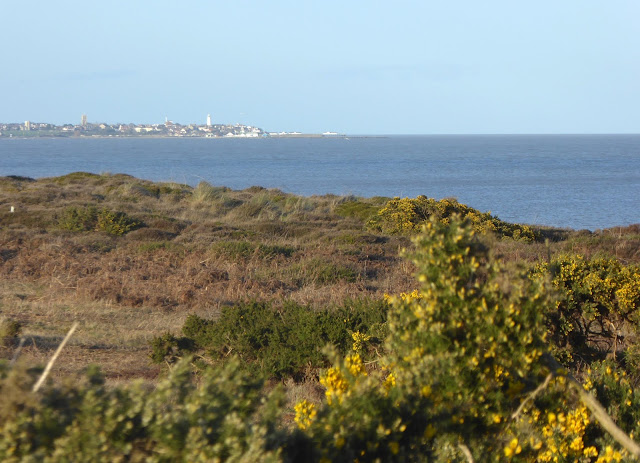 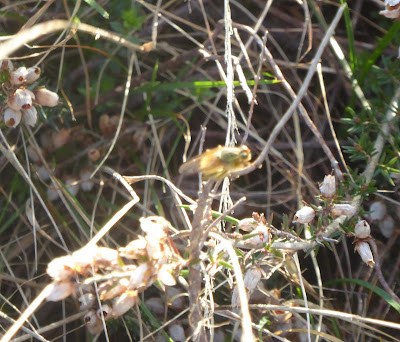 There are few insects about at present, so I was quite pleased to find what I think may be a Yellow Dung Fly. I have only seen one once before, so my ID may or may not be correct.

These are the coastguard cottages. Edward Thomas, the poet, stayed in one of these while he was writing a biography of Richard Jefferies. 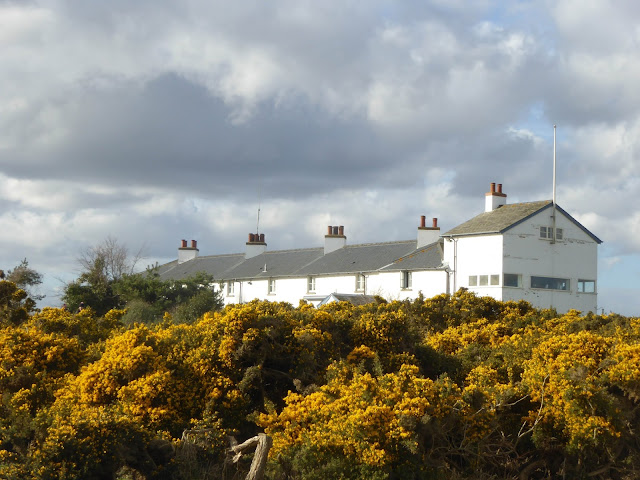 The photo below shows the expanse of empty beach... 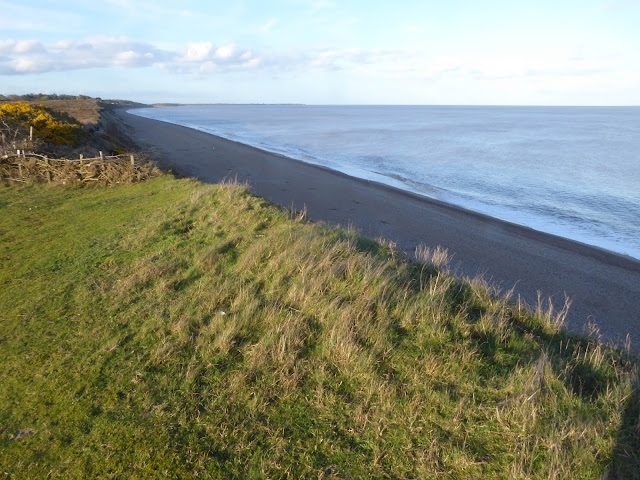 ...and this is the view in the other direction, with RSPB Minsmere down below and Sizewell in the far distance. 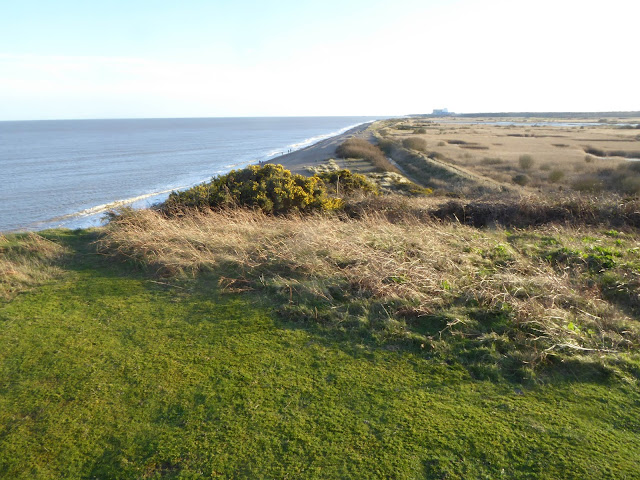 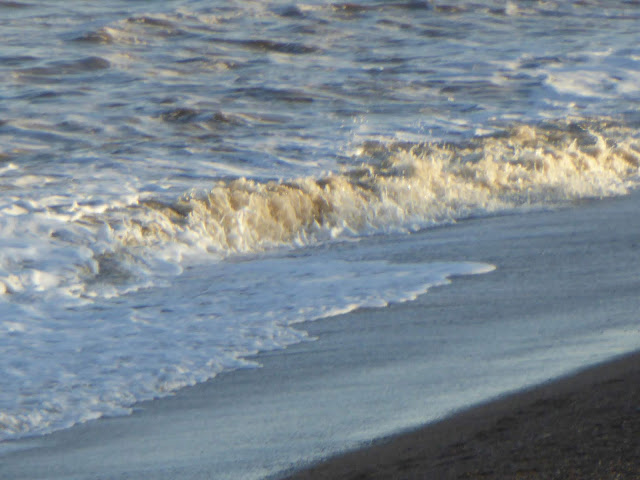 After a thermos of Earl Grey, we dragged ourselves away from the waves and drove home via Minsmere. We have seen floods in the network of low-lying roads in the area before, but these were probably the most extensive ones we have encountered here. Our hearts go out to all who have been affected by the floods elsewhere. 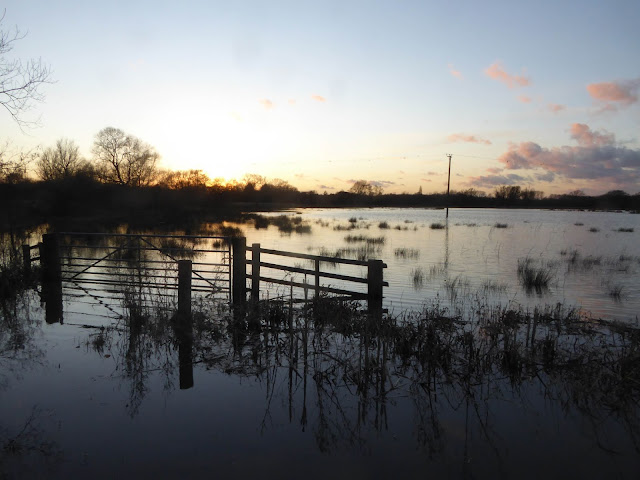 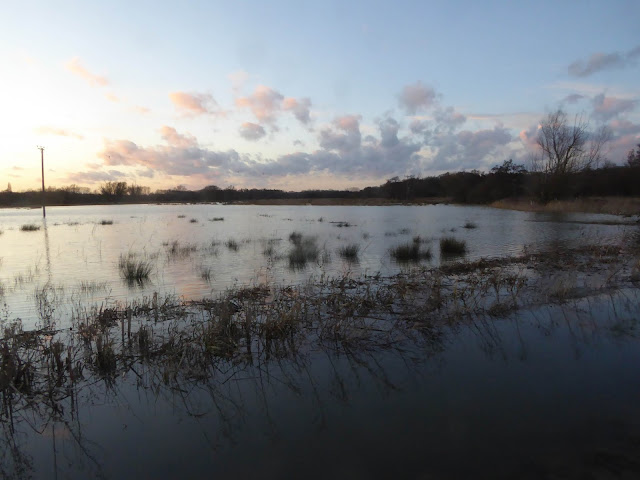 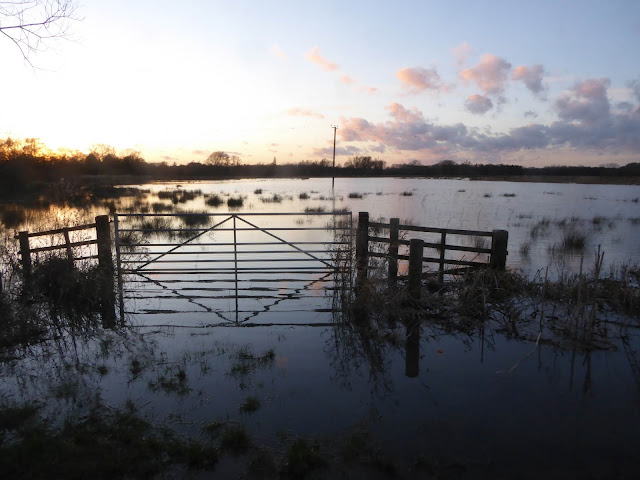 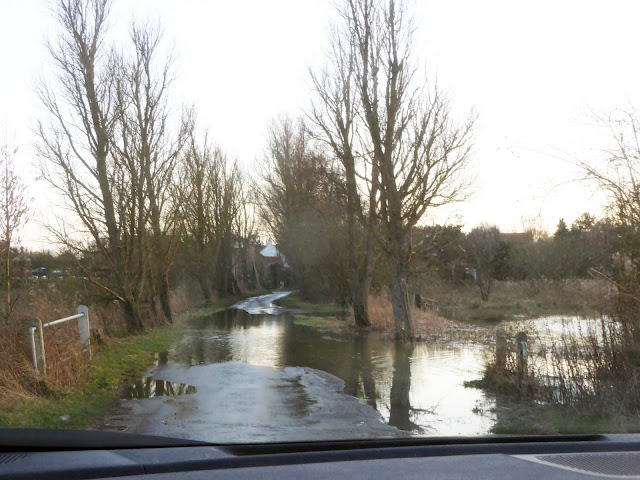 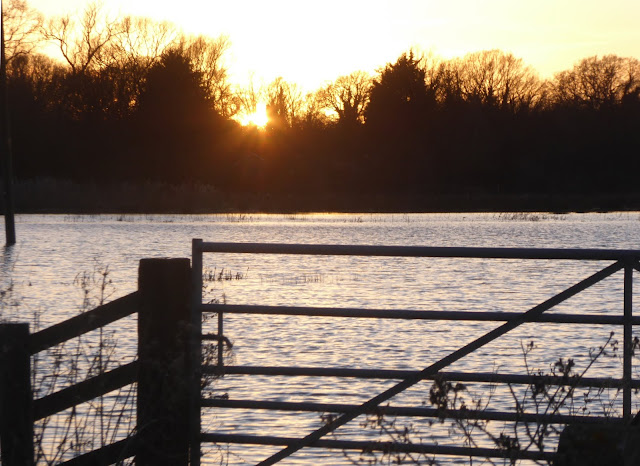 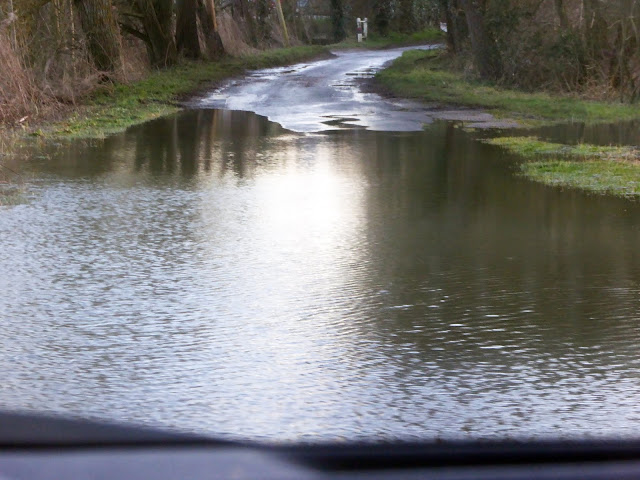 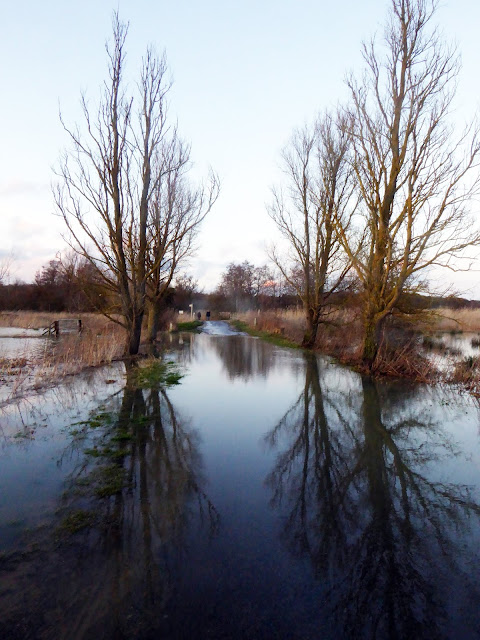 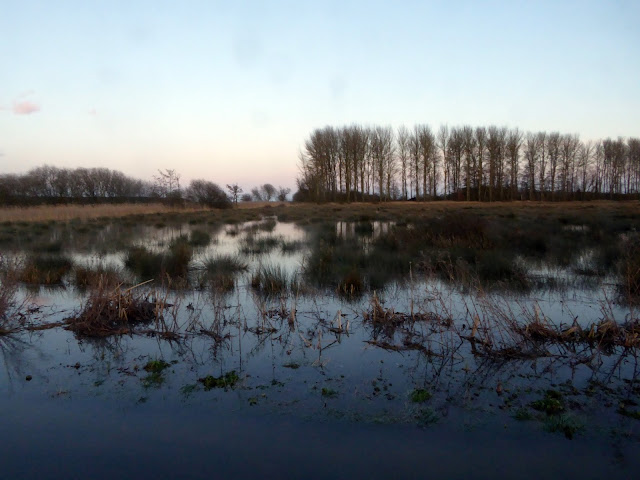 We came home to a starry night and a pair of Tawny Owls making their respective 'twits' and 'twoos'.
Posted by Caroline Gill at 00:00

Agree it was so nice to have had some sunshine finally! Dunwich is such a lovely place- glad you managed to see the Dartford Warblers there.

We, personally, have fortunately only had to suffer a soggy garden, my heart goes out to those who have really succumbed to all this rain we have had recently. Locally there are large fields flooded and roads under water, but folk seem to find the strength to get up and get on with it.

What a wonderful place to walk and great to see a Dartford Warbler. I've never seen one although I was hopeful when we visited Arne in Dorset but it was not to be!!

Thank you all for your kind comments; and yes, it was a thrill to see the Dartford Warbler and to focus on something other than Covid 19 for a couple of hours...