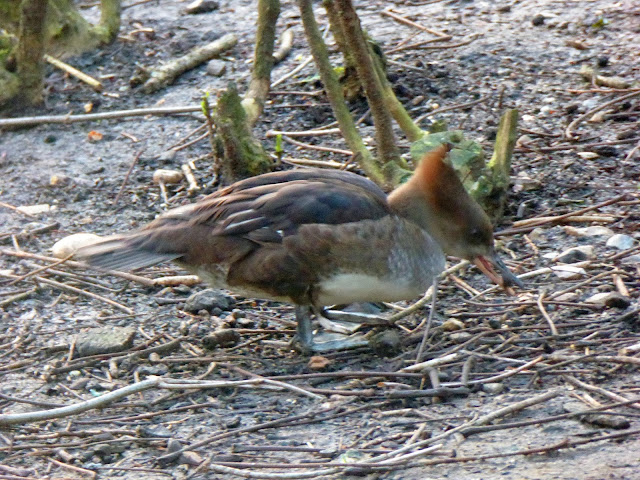 Earlier in the week I had read a post on Facebook (David Quinton, Suffolk Birds, 21 February 2020) with photos of a female Hooded Merganser in Christchurch Park. We decided to take a look to see if the bird was still in the area. As you can see, she was, though the sunlight was intermittent and my photos are little more than record shots. I have read on the internet that the bird was introduced by the park authorities in the hope that this female would mate with a male, but I have not verified this suggestion.

What I do know is that a certain male Hooded Merganser recently went for a waddle down Tavern Street in the town centre, and had to be returned to the Christchurch pond by park rangers. According to the report in The Ipswich Star, the bird is almost certainly not a wild one.

Hooded Mergansers hail from North America, and the female in the photo is the first I have knowingly seen. Having watched a good number of Goosanders and Red-breasted Mergansers in the north of Britain, I was surprised at the small size of the bird in the park. 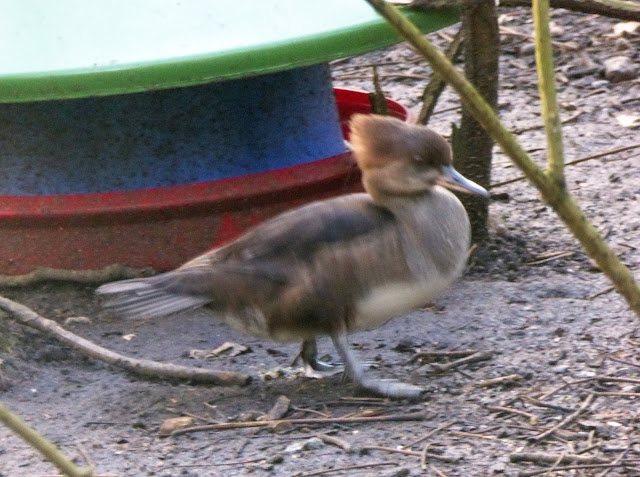 You can see her ginger 'tuft' in the photo below as she leaves the geese to their rest and heads out alone onto the water. 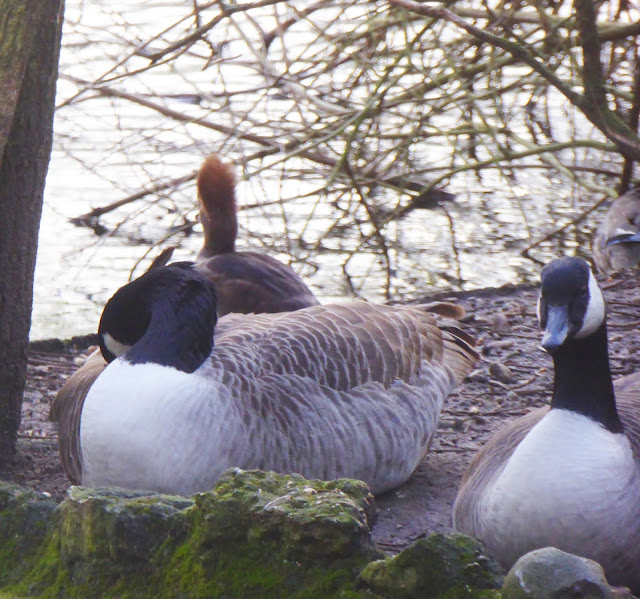 David thought he saw a Song Thrush in the garden a couple of days ago. I missed it, but was pleased to see this thrush in the park hopping about in the twigs. 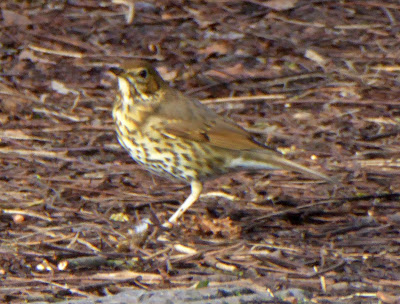 The photo below shows one of the Coots we noticed. 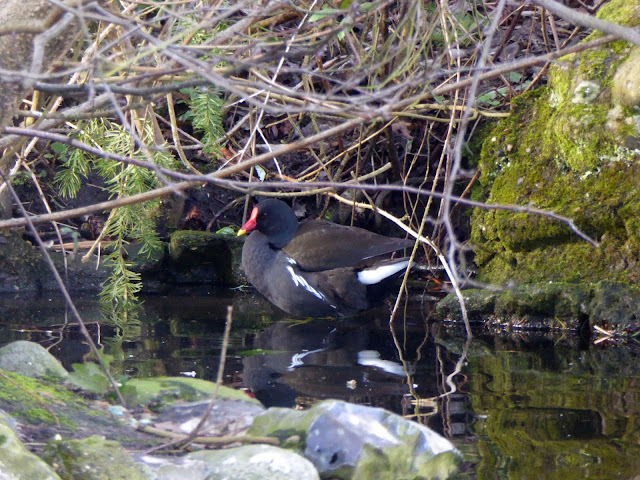 There was a large queen Bumblebee on the pussy willow below, but by the time I had focused my camera, she had flown off. Just look at the pollen she left behind. 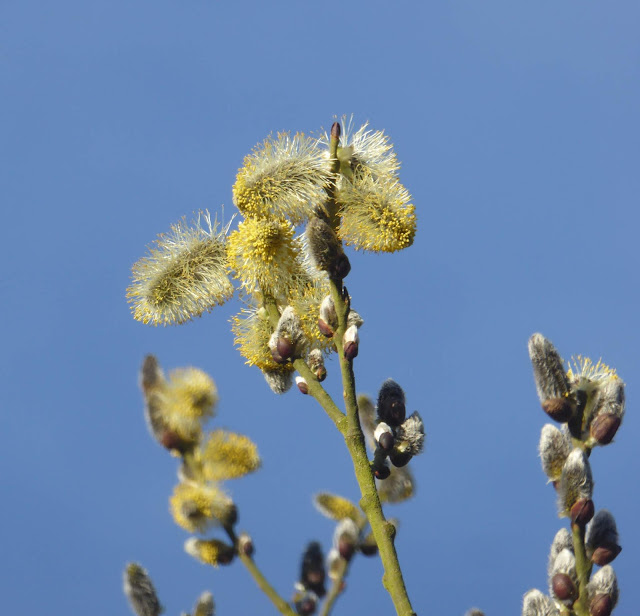 We noticed a few Manadrin ducks. There are usually some in or around the pond. 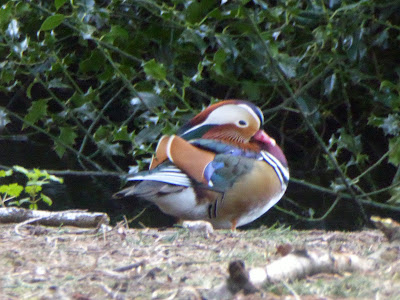 Christchurch Park is really very convenient for Ipswich. The church below, St Margaret's, in the town centre can be seen from the park. 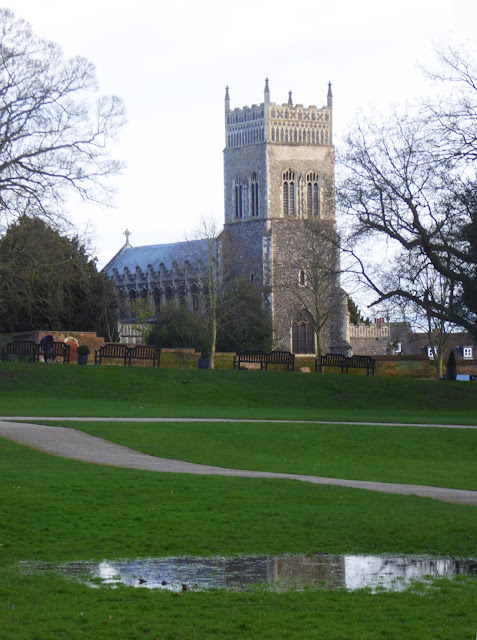 Flowers and blossom are beginning to grace us with their presence. I believe this flower, with its distinctive speckled leaves, is Lungwort or Pulmonaria. 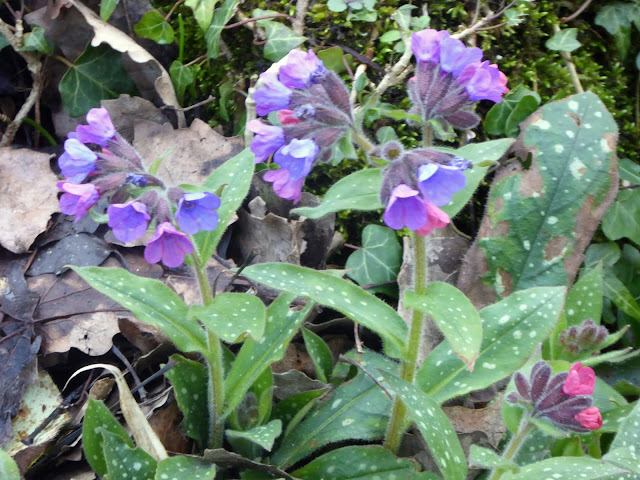 The yew in the photo below is the oldest tree in the park, and has its own sign which explains that yews are among the hardest 'soft wood' trees. The tree is over 14m high and at least 600 years old. 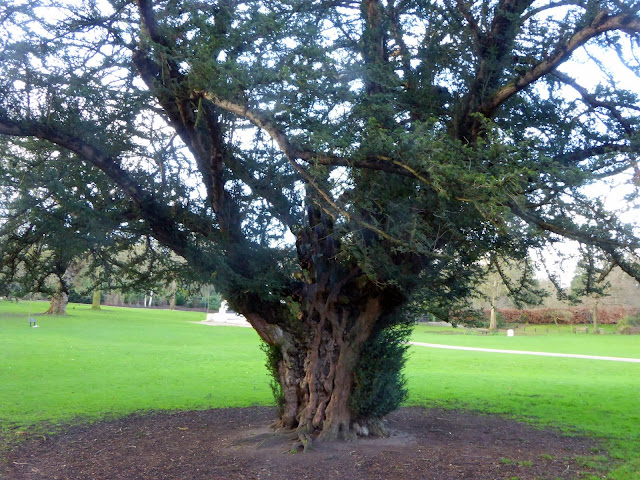 What fascinating bark and trunk structures... 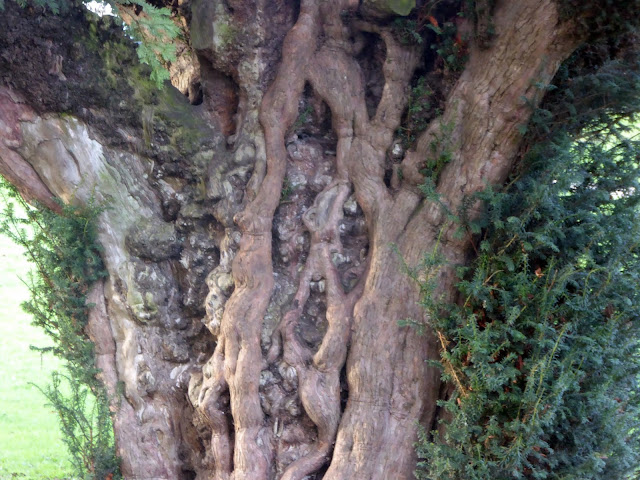 There were several Grey Squirrels darting about and skimming up and down trees. The ground was littered with what looked distinctly like half nibbled chestnuts. 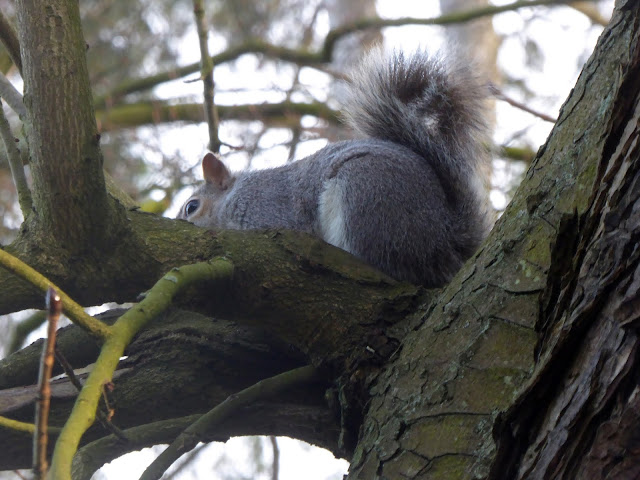 Thomas Wolsey was an Ipswich man... 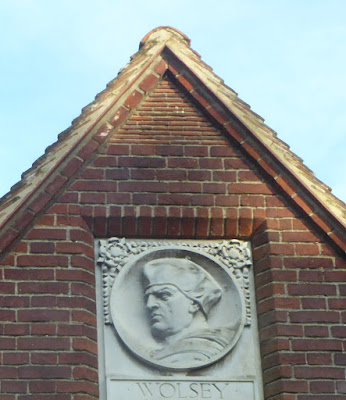 The picture below shows part of the facade of Christchurch Mansion, which is situated in the park. It was constructed on the 12th century site of Holy Trinity Priory, which failed to survive the Dissolution of the Monasteries under King Henry VIII. 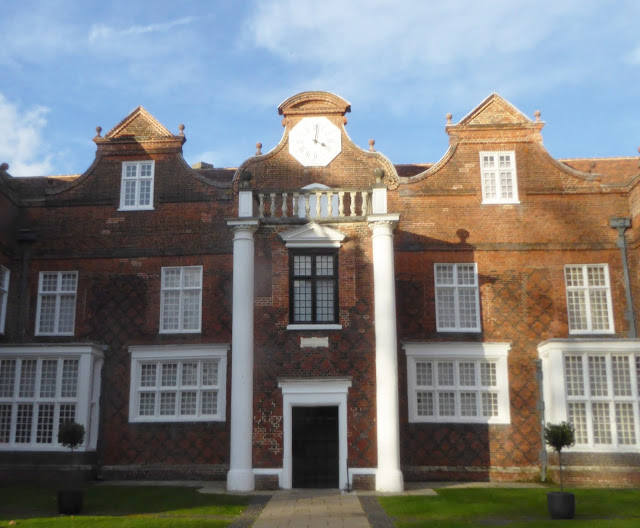 This plaque with the date 1550 rather appealed to me. 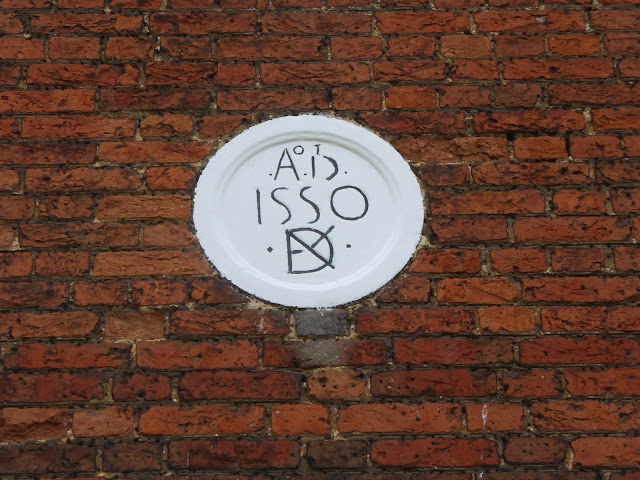 My Latin is pretty rusty but if you think along the lines of making the most of your talents, you probably won't go far wrong... 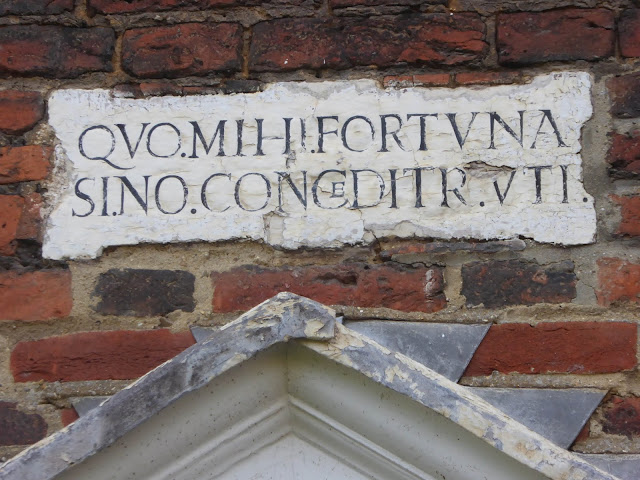 It was good to have made the most of the sunshine... 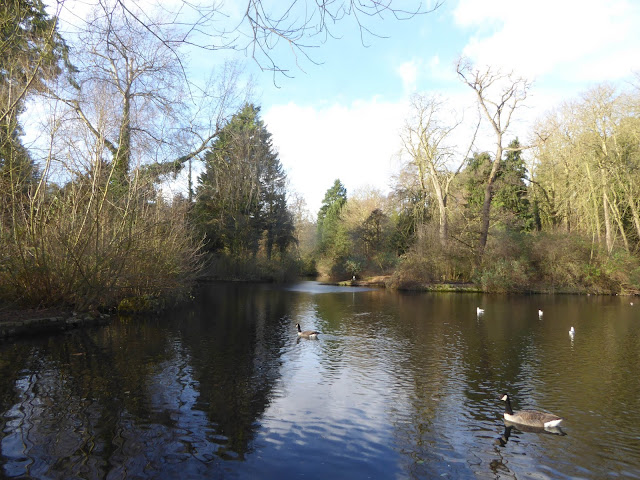 ...and to have enjoyed birdsong from the bushes. The Robin below was looking magnificent. 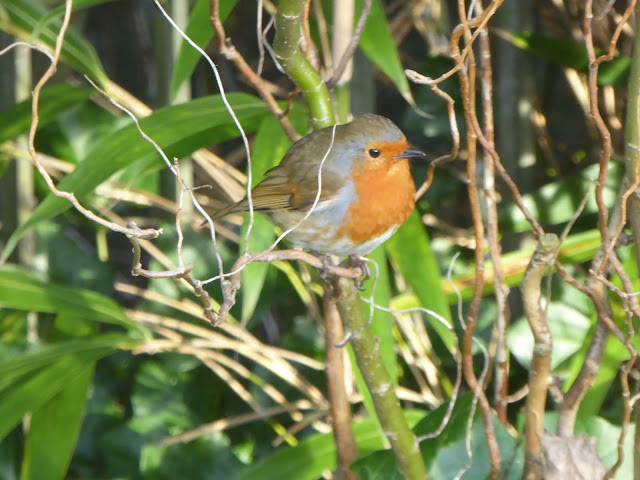 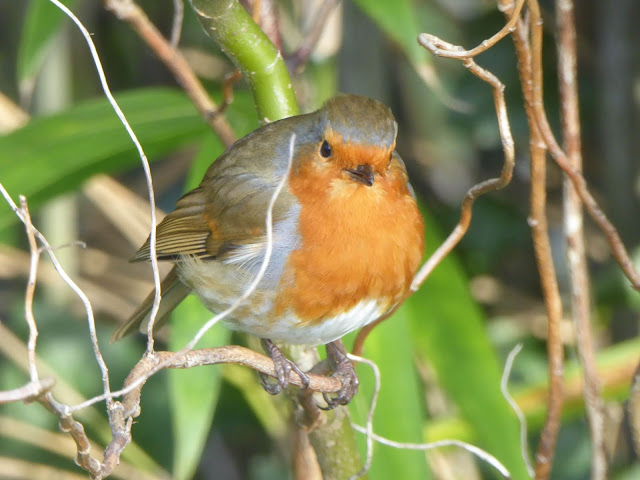 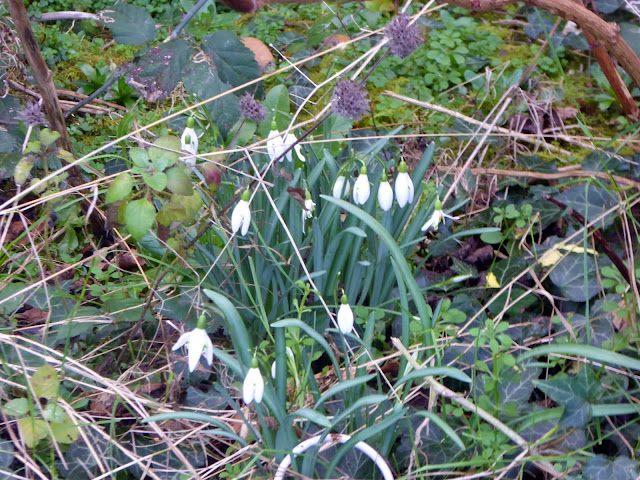 The light was fading by the time we reached home, but I was thrilled to find that our single Snowdrop had become a tiny drift... 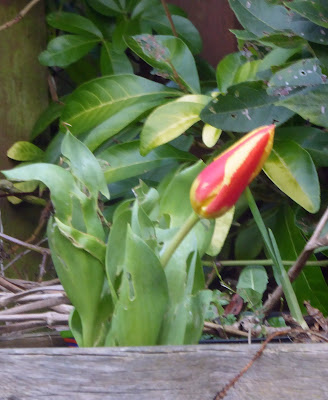 ...and with a very early tulip braving the wind and a hungry Blue tit feeding from the coconut, it began to feel just a little like spring. 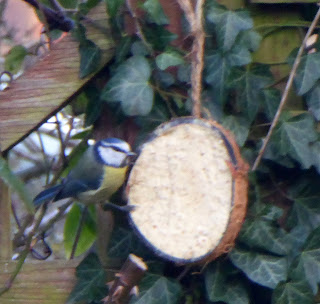