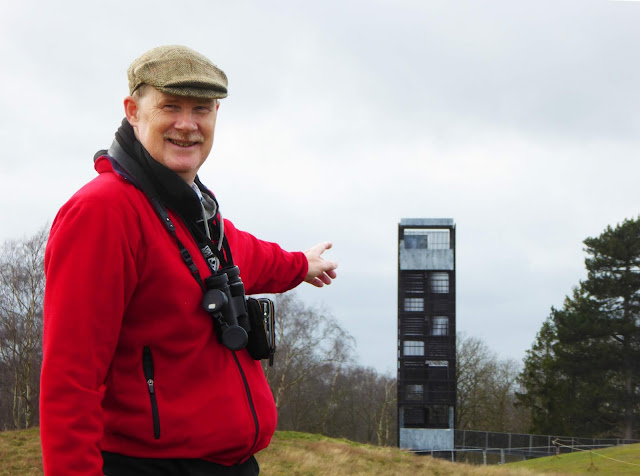 Saturday was a very grey day, but we were keen to get some fresh air and decided that NT Sutton Hoo was our best option. There seem to be a lot of changes happening over the site at present, not least the construction of this 17 metre high viewing tower. 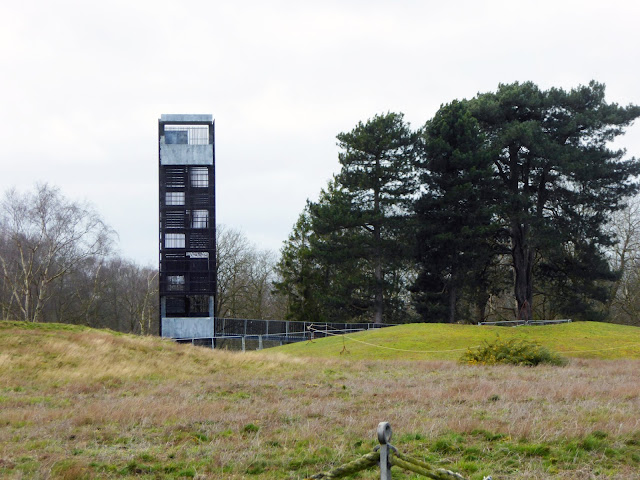 The Anglo-Saxon Sutton Hoo ship was 27 metres long, and was dragged up to the site in the photo above. 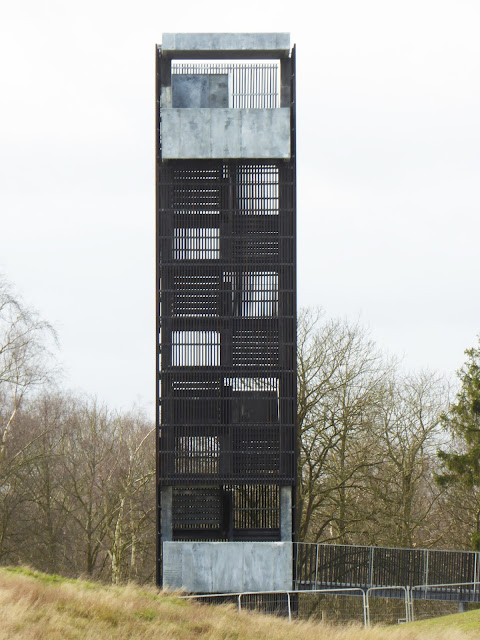 Sadly there is no lift so the tower will not be accessible to all, but for those who can climb, it will provide views not only of the Royal Burial Ground (you can see a couple of the mounds in my photo), but also of the river Deben, which lies in the valley behind. 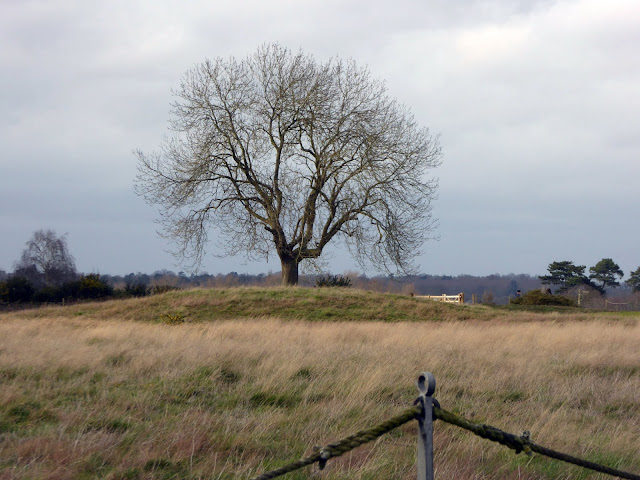 The sudden flicker of sunlight was a welcome sight on a grey afternoon. 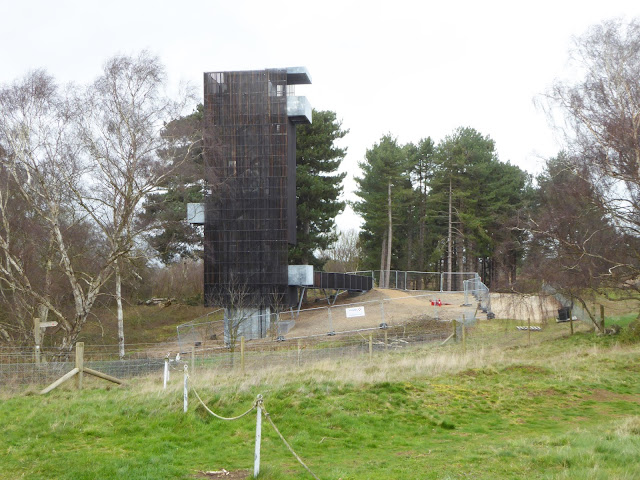 The photo above was taken on Saturday, showing the work in progress at the base of the tower... 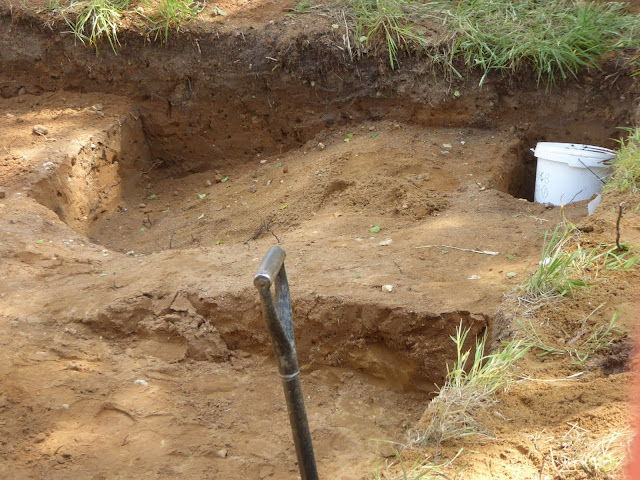 ...and I took the photo above last summer when the area was being excavated. 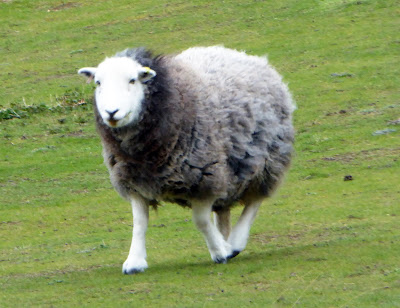 It is always a joy to see the Herdwick sheep on the site. Apparently, and not surprisingly with the 'wick' ending, the name comes from the Old Norse word, herdvyck, meaning sheep pasture. 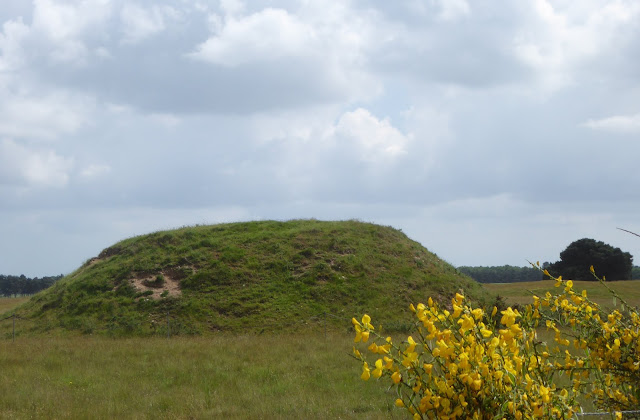 I took the photo above on a grey day last June, but have reposted it to give a little more impression of the site. 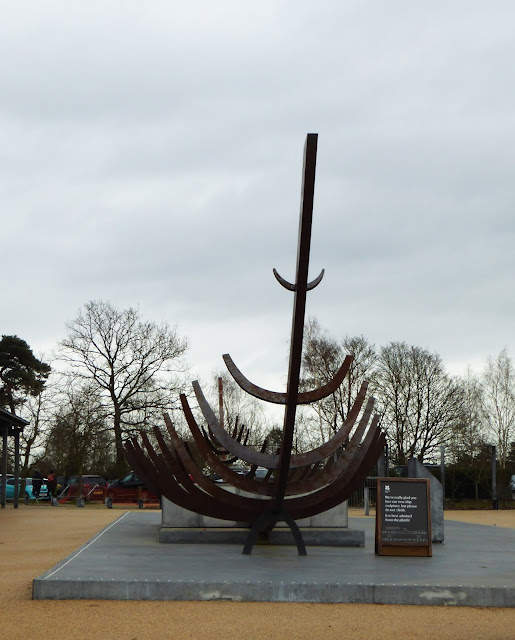 The photos above and below show a metal installation (i.e. model/reconstruction) of the ship by the visitors' centre. 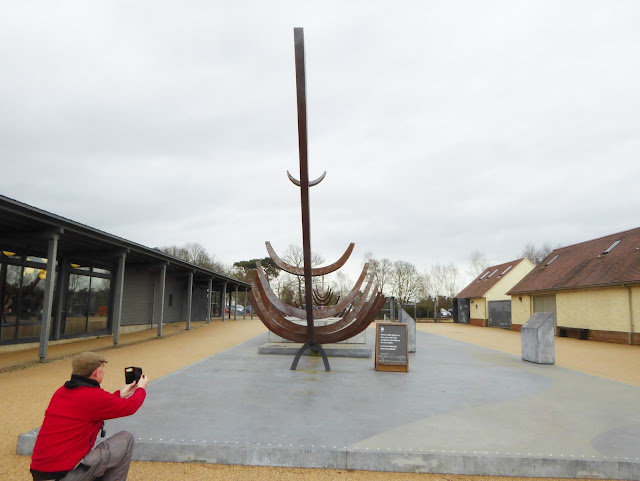 I looked so hard for some wild spring flowers, but without much success. There were some lovely daffodils, ... 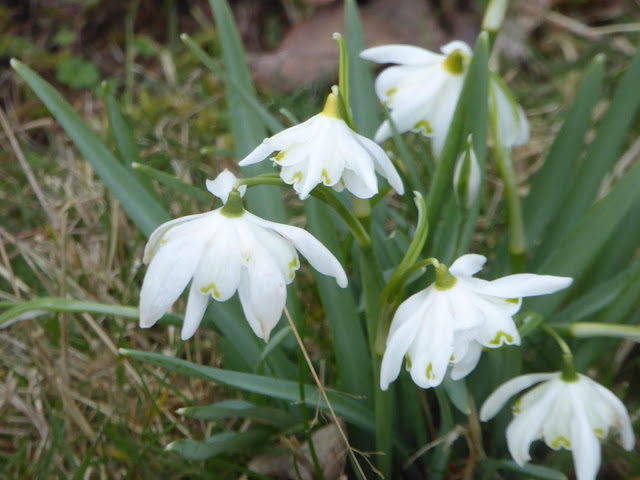 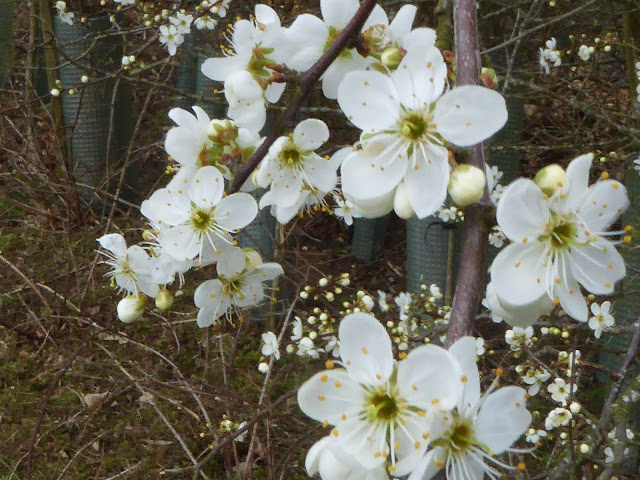 ...and some beautiful blossom. I think it may be Blackthorn as there did not appear to be any leaves in evidence. 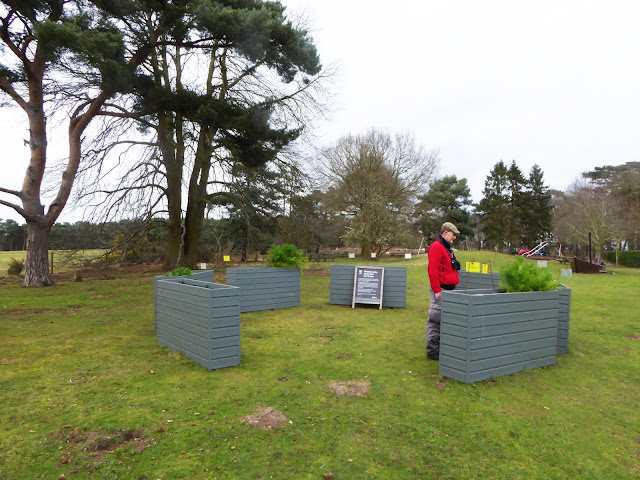 We noticed the raised beds and assumed they were part of a sensory garden, but it turned out to be a 'dye garden'. 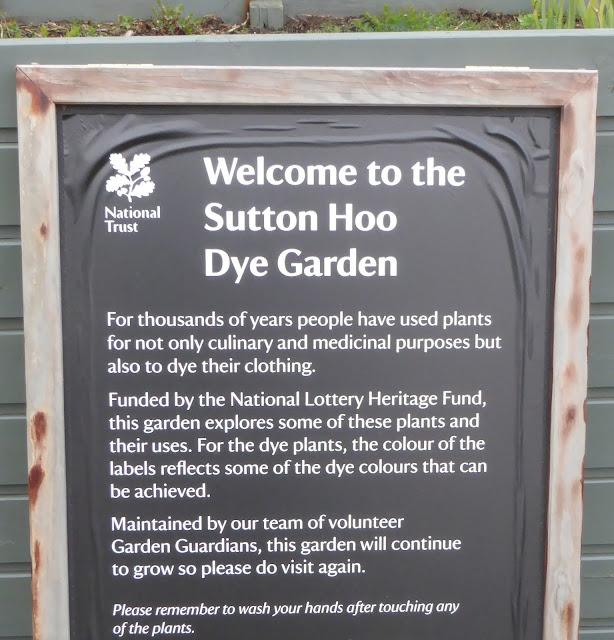 I look forward to seeing it again once the plants have grown a bit. 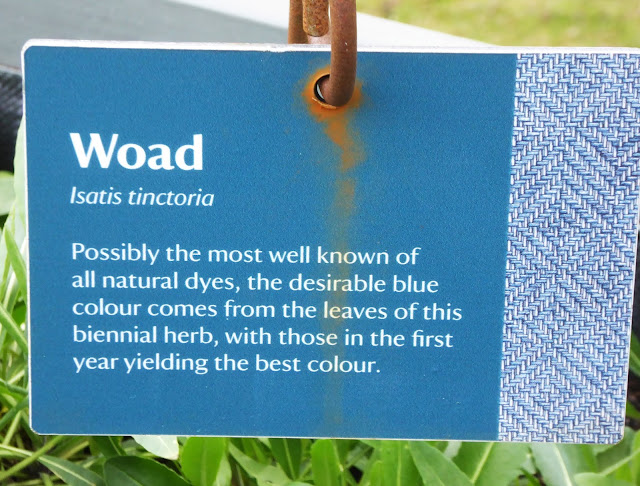 The names alone conjured up aspects of Anglo-Saxon life in my imagination, but the Woad plant actually originates from the area that is now south-east Russia (K.G. Gilbert, in Encyclopedia of Applied Plant Sciences, 2003). 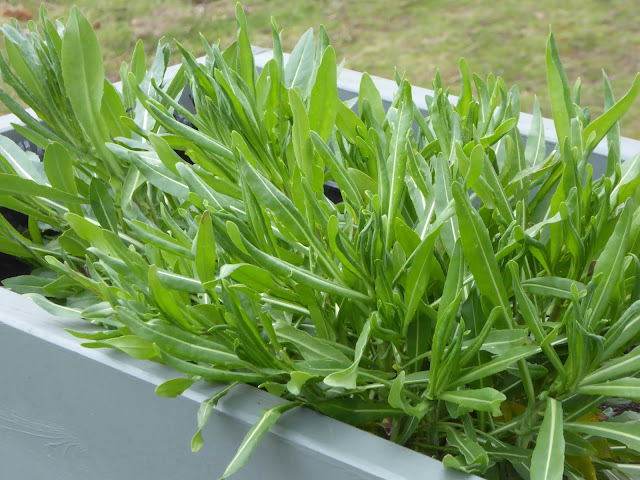 These Woad plants seemed to be thriving. 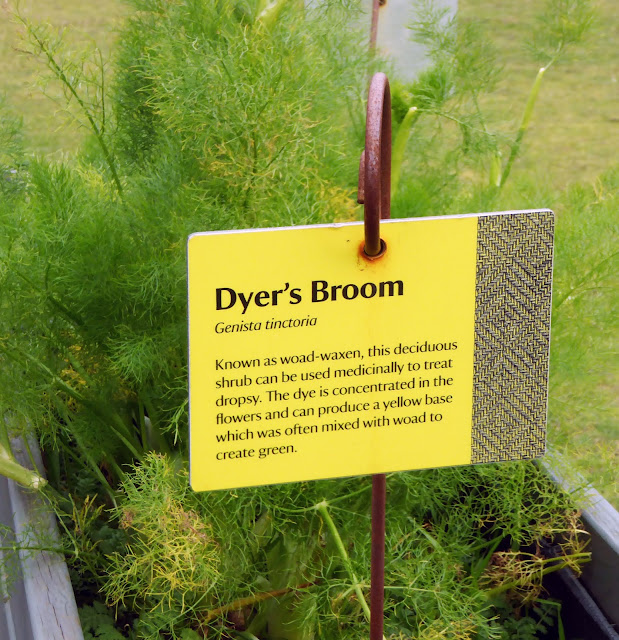 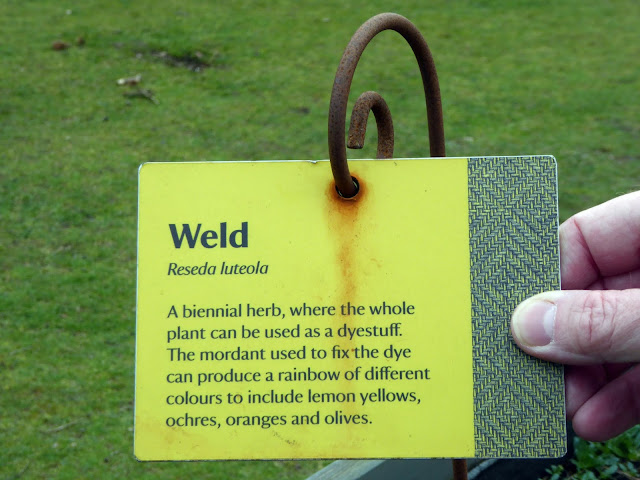 We visit Sutton Hoo several times a year. I wonder what we will see next time. The site is usually a good habitat for Skylarks and Small Copper butterflies. We noticed that a number of bramble and gorse bushes had been removed. I just hope the construction work will not disturb the wildlife habitats too much. 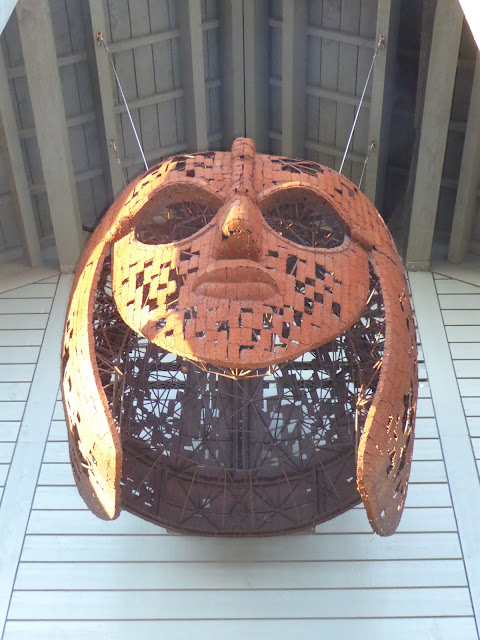 I like the dye garden, though less keen on the appearance of the viewing tower, though certainly nice to have the chance to see things from a higher view point. I hope construction doesn't disturb the wildlife

I was reading about Sutton Hoo fairly recently in an English Heritage magazine I think so lovely to see another of your posts on it. Great set of photos. The Viewing Tower looks interesting - I really would love to visit one day.

Well the dye garden is certainly different and interesting.