Blue Skies at Snape, the Calm before the Storm 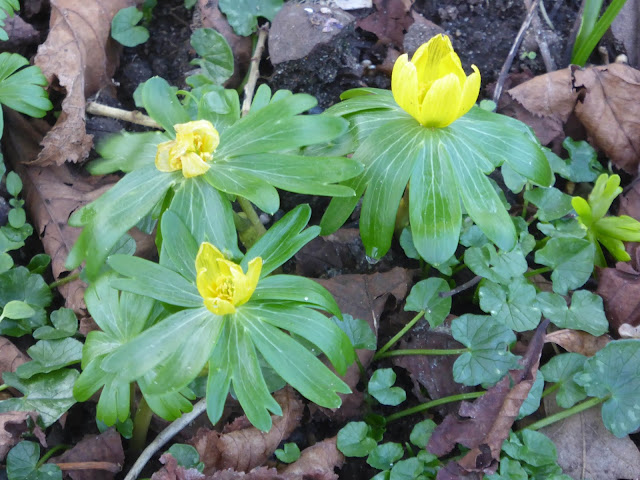 It is always a joy when the first spring flowers appear, and these bright yellow Aconites at Snape this afternoon were the first ones I have seen in 2020. 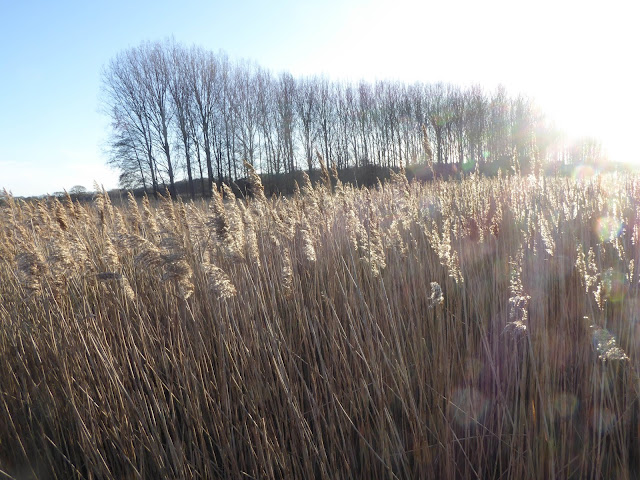 The reedbeds were shimmering in front of the poplars... 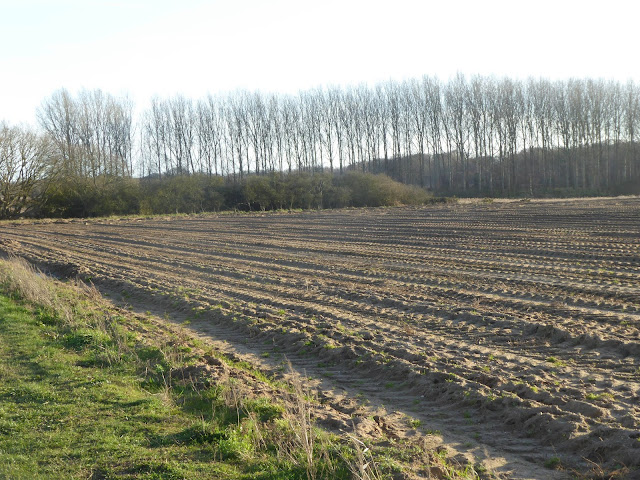 ...and large swathes of the sandy soil had been ploughed. 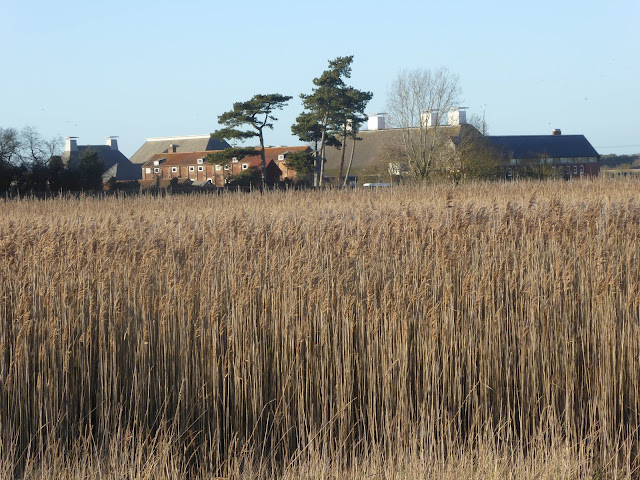 This was the view, looking back to the Maltings, with its cafes, shops and famous concert hall. 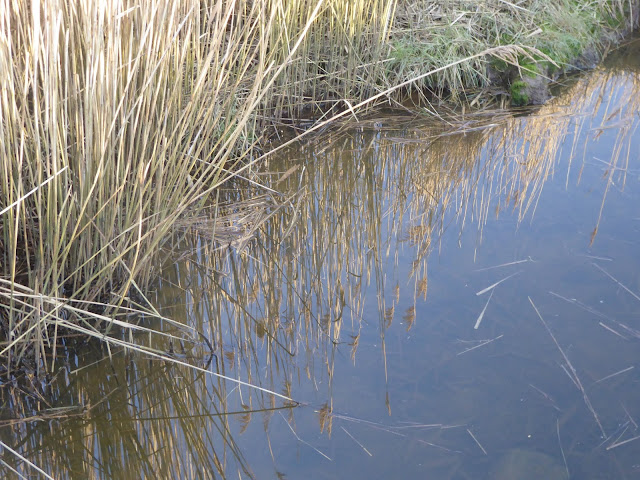 I saw one tiny fish in the water and a couple of flies or midges above it, but it was really the reed reflections that caught my eye. 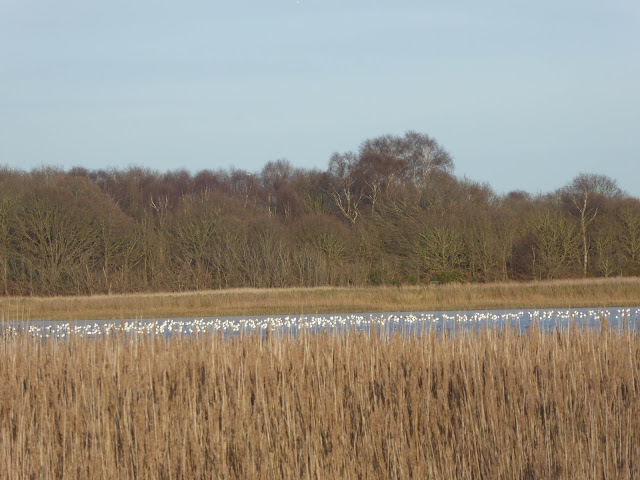 The gulls were out in force. 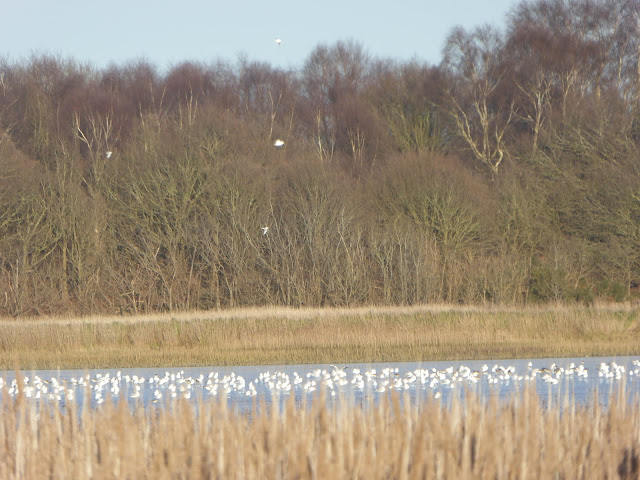 There were a few small waders and some Shelduck in among them. 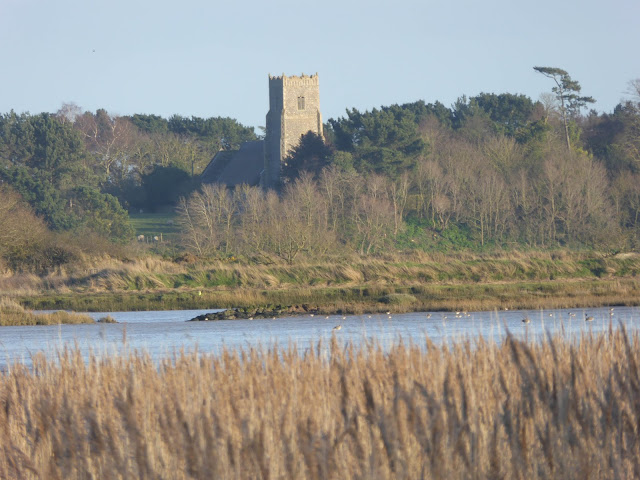 This is St Botolph's church, across the water at Iken. 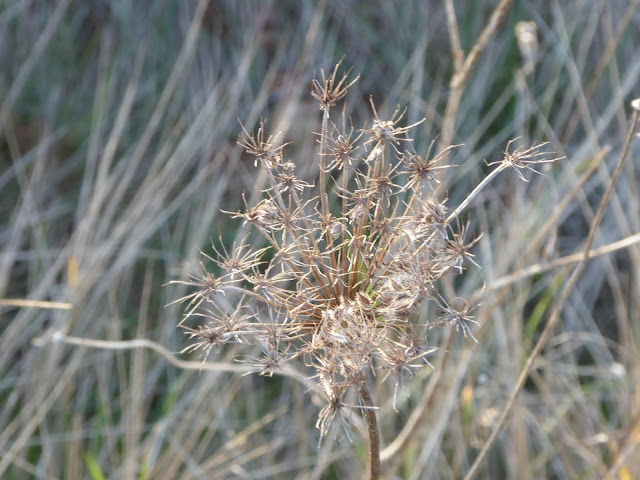 These small flecks of green must indicate new growth in the reedbed. 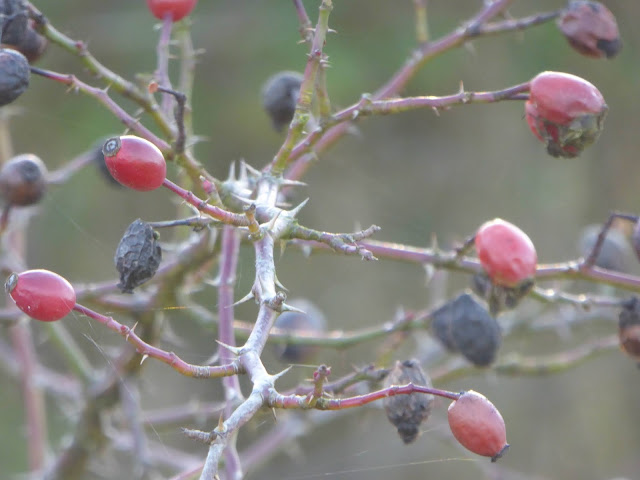 I wonder who will find these remaining rosehips. 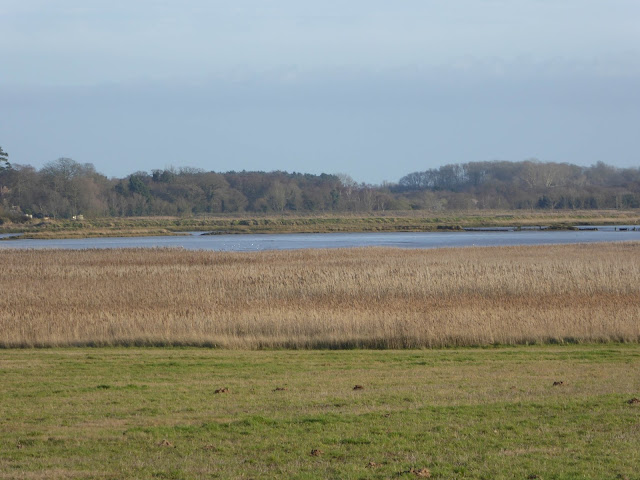 The land here is very flat, and I love the marked bands of colour - green, gold, blue, more green and more blue - that can be seen. 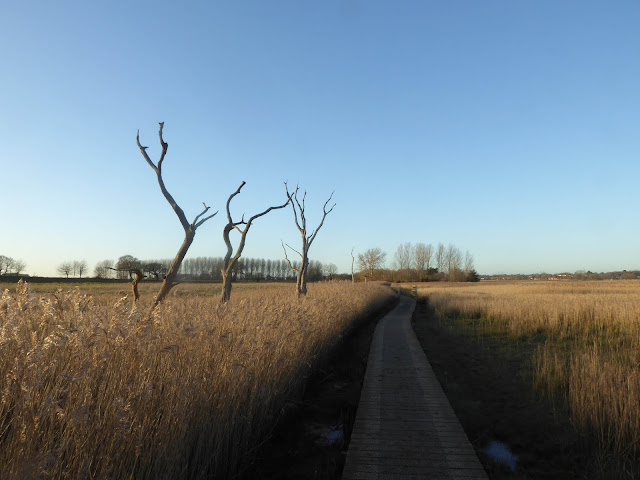 We stopped to listen for birds, but apart from the cooing sound of some distant Wood Pigeons, we heard very little above the sounds of an aeroplane overhead, some traffic in the distance and what was probably the motor of some kind of farm machinery. 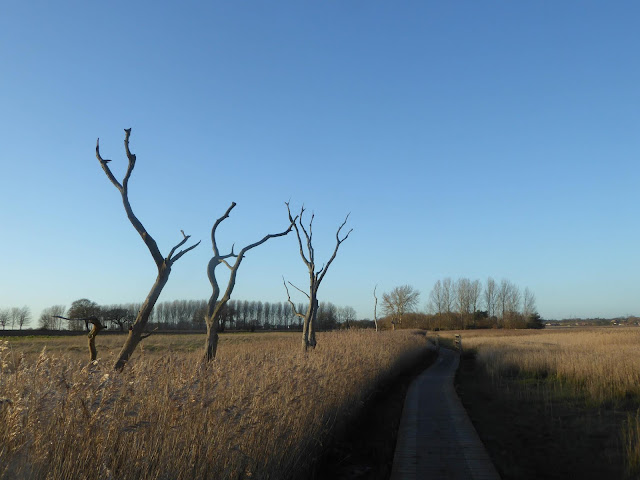 There may not have been much sound on the marsh, but the view from the boardwalk is always rather special, with these stark trunks. Robert Macfarlane called these skeleton trees 'rampikes' on his Twitter feed on 24 September 2019. I always thought that trees like these had been struck by lightning, but I believe these ones may have been damaged by flooding. 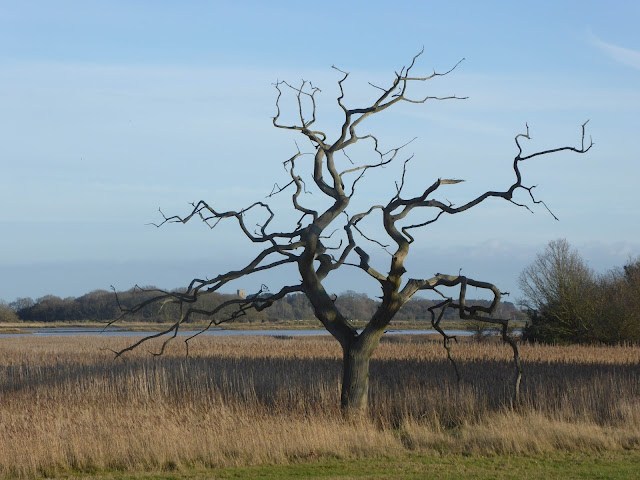 On the east coast of the USA, stands of waterlogged trees are known as ghost forests. You can just see Iken church through the bare branches. 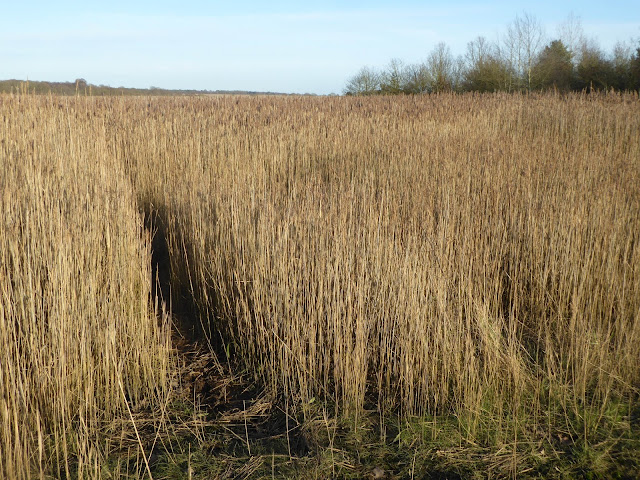 I'm guessing a Muntjac has been making its way through the reeds on a fairly regular basis. 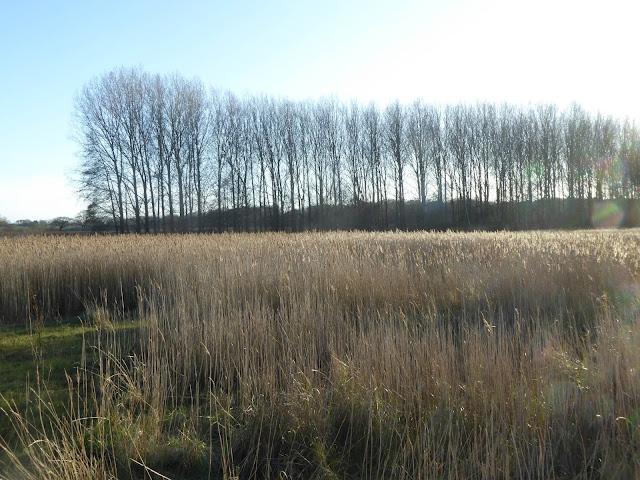 There was a last shimmer of light as we took a last look at the poplars. 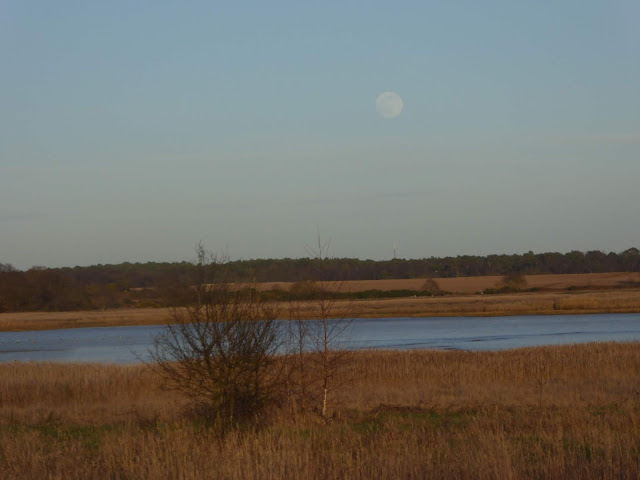 The moon rose over the water... 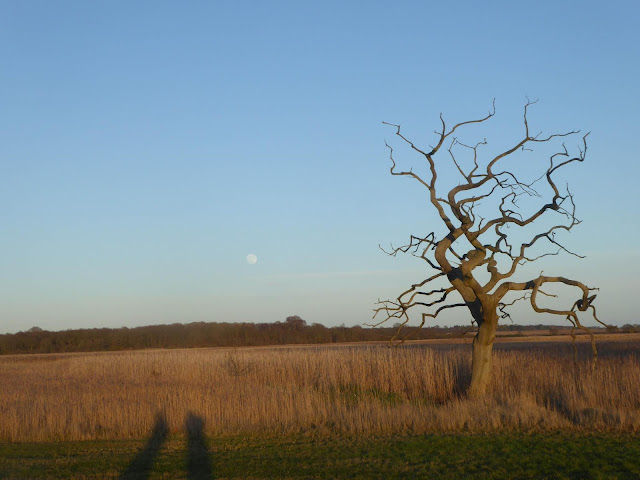 ... as our shadows began to lengthen.

Postscript
Gusts in the high 60s (mph) are predicted for our area tomorrow (i.e. for Sunday 9 February). Do check the forecast if you are out and about.
Posted by Caroline Gill at 22:37

Super photos Caroline and I love the reflection of the reeds and the "rampikes" !! It looks another lovely place to walk and birdwatch. Hope you didn't get too much damage from the storm. It was very windy here and loads of rain although it has been better today.

Thank you, Amanda and RR, for your kind comments; and, RR, for your alliterative 'Rs'! One tall tree has come down just beyond our garden. I guess the squirrels will have to move house...

It's always so nice to visit your blog and see your photographs, I always enjoy them.
Those bright yellow Aconites are good to see.