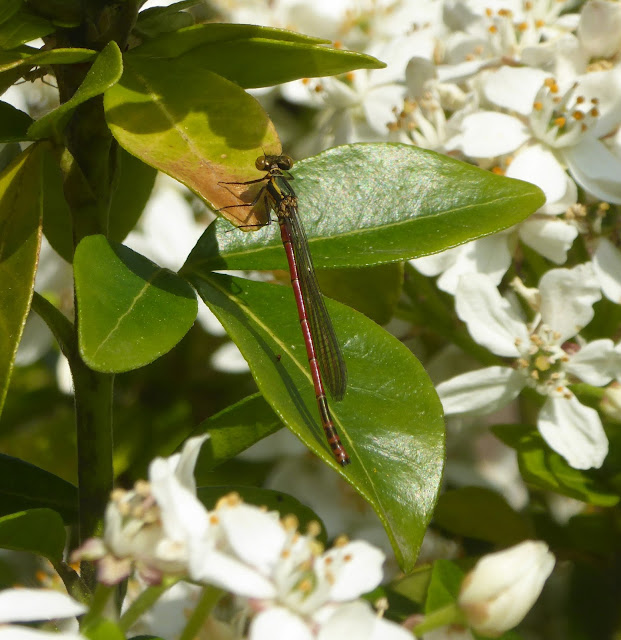 What a thrill to discover this Large Red Damselfly in our garden the day before yesterday. It is the first Damselfly I have seen this year, and I hope several more will follow. The bronze colour on the thorax is indicative of immaturity. We have a tiny water feature at the entrance to our 'wild garden', which is in close proximity to a designated LNR (Local Nature Reserve), offering mixed habitats including a stream and an area of woodland.

I checked my most up-to-date list of species seen in our home patch, and it seems I need to add this Large Red. I had a feeling I had seen these in the garden once or possibly twice before, so it may be that they simply failed to get on the list.

The list began with Lucy Corrander's Tree Following meme in mind. I am continuing it for my own interest, and think I will now omit unidentified creatures. There have, for example, been plenty of unidentified moths over the last two or three years. With identification in mind, I perhaps need to post more on iSpot this summer.

Avian sightings - unlike the Big Garden Birdwatch, a bird seen clearly from the house or garden counts for my purposes. We have, for example, yet to see a Grey Heron landing in our home patch, but we have had several good sightings of these birds flying over in the direction of the local nature reserve, one road away. We have often heard the local Tawny Owl, but I am not counting 'birds heard' (unless they are also seen) at present.

What a great list you have, it's so nice getting something new in the garden.
Amanda xx

Well done on the new species - always exciting. Have only seen two damselflies this year - both last week at a nature reserve and I couldn't get a good enough look to id.